A free typeface from Goldman Sachs (comes with strings attached); a Basque sans serif for a Basque electronic music project; and — our new monthly thing! — a list of the coolest type releases of July from the TypeСache team

From now on, in each digest we will publish a list of the most noteworthy type releases of the past month — we asked Akira Yoshino, Taro Yumiba, and Shohei Itoh, who post daily updates on new fonts on TypeCache.com, to compile this list.

Hi, we are type fanatics from Japan🇯🇵, running TypeCache.com, and we are very excited about our new collaboration with Type.today for a monthly digest. We got the impression that there were a lot of expanded typefaces this month. Also, the launch of a new type foundry called Fontwerk. They have good typefaces in their library, and we want to keep an eye on it.👀 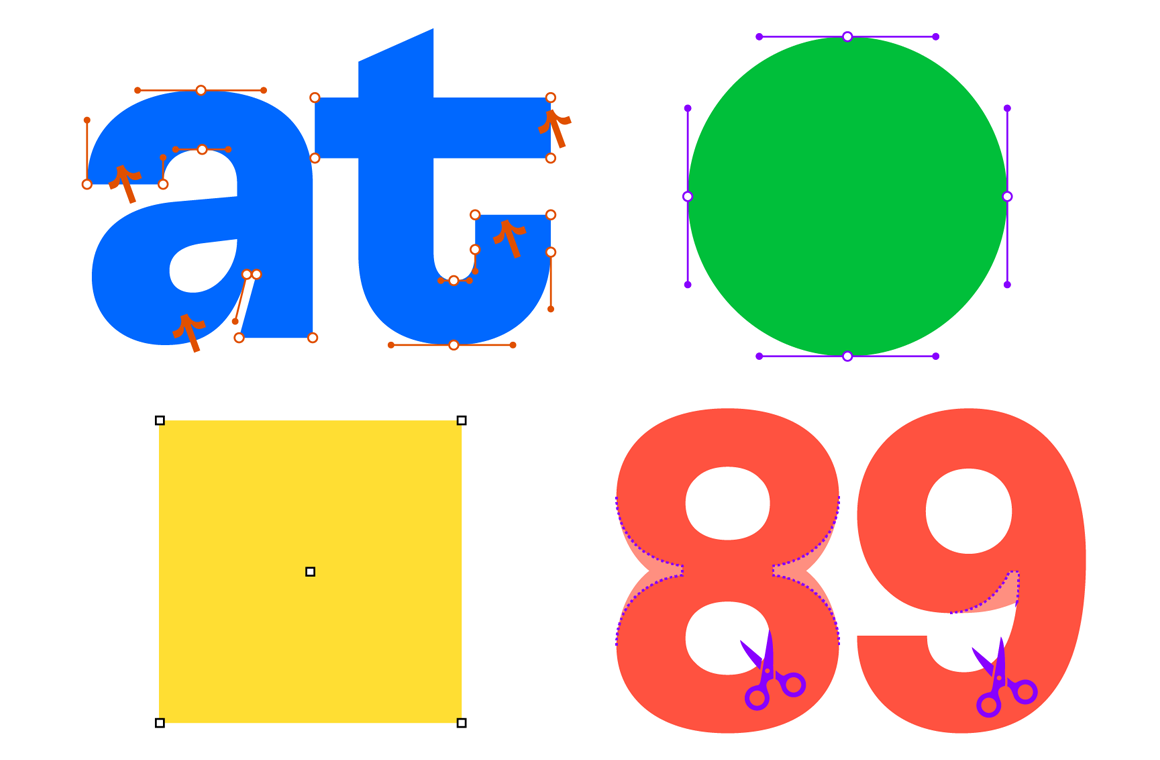 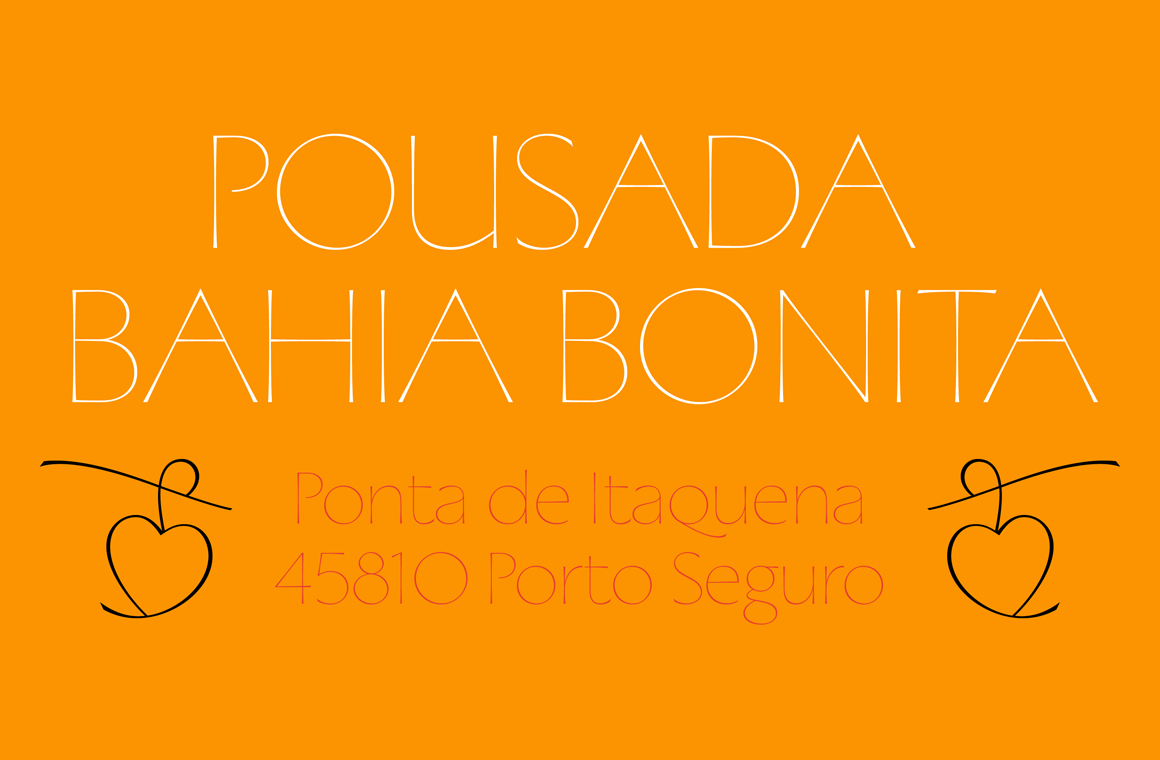 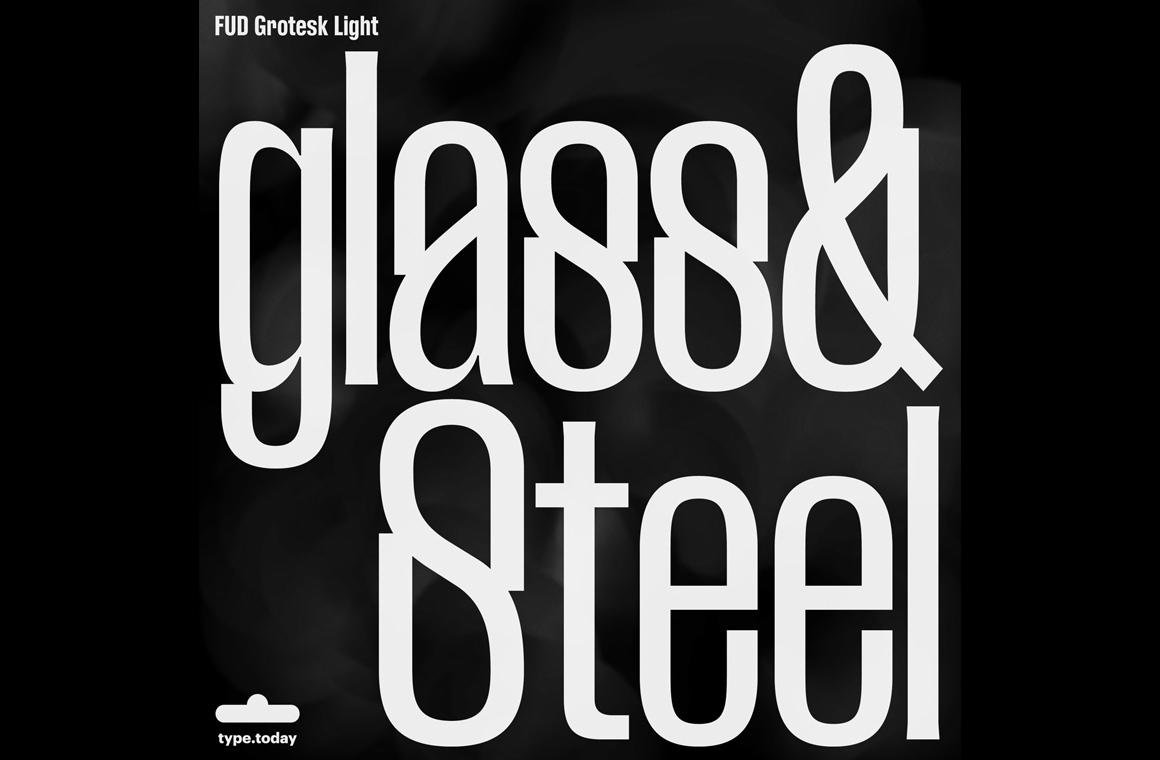 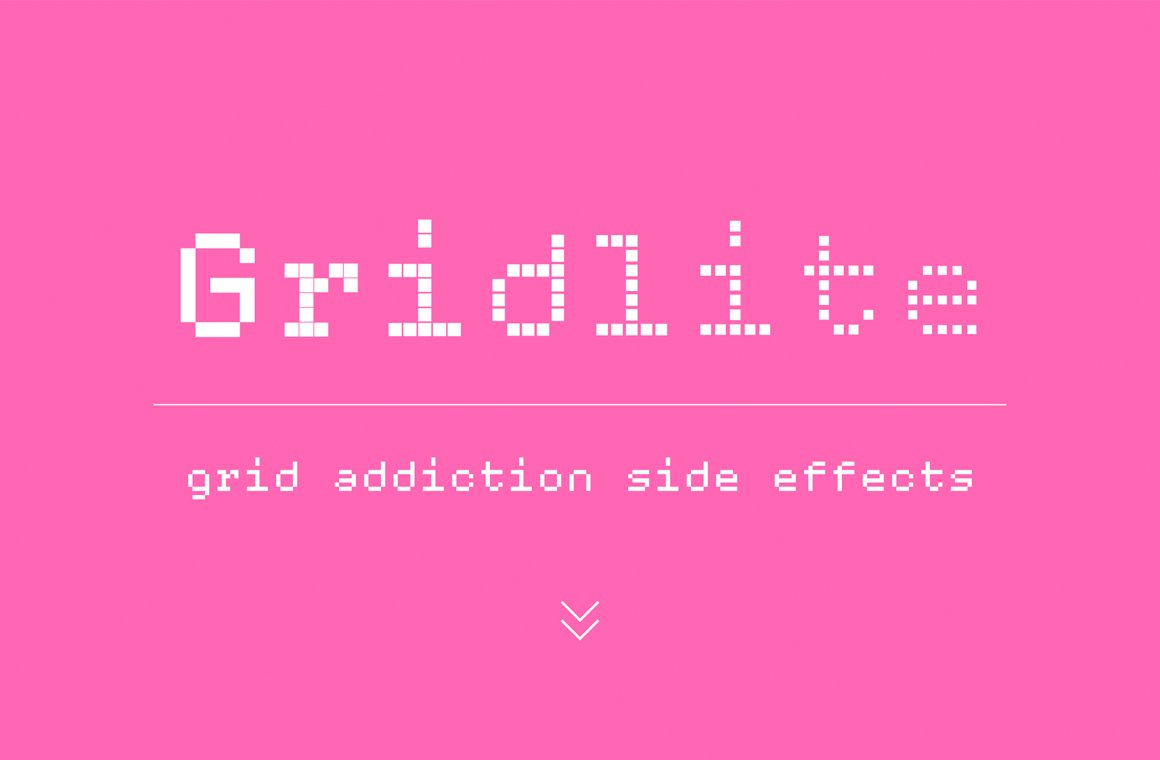 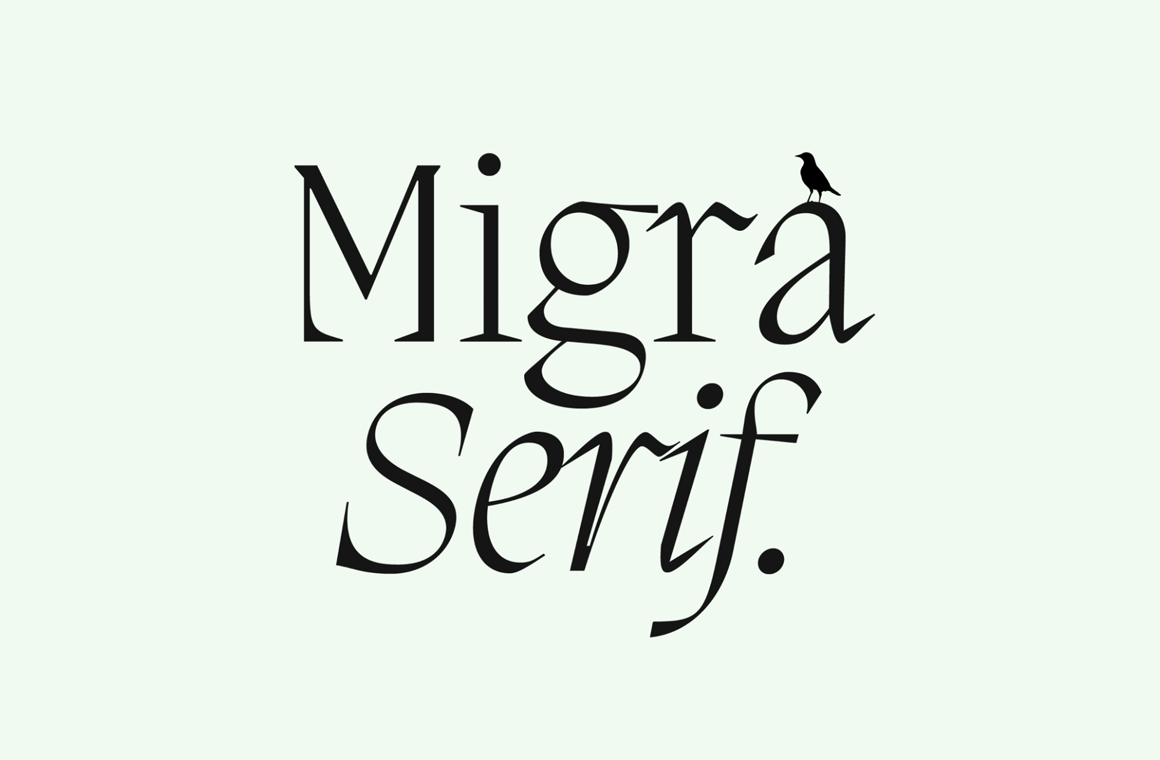 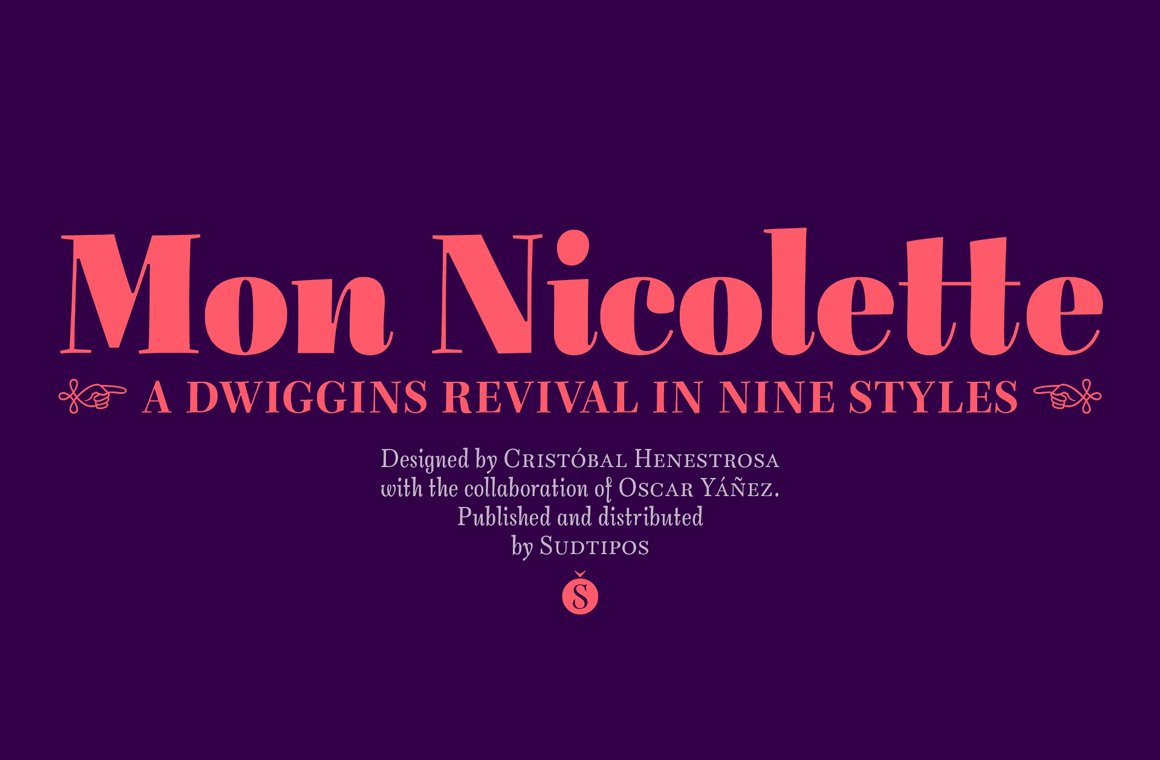 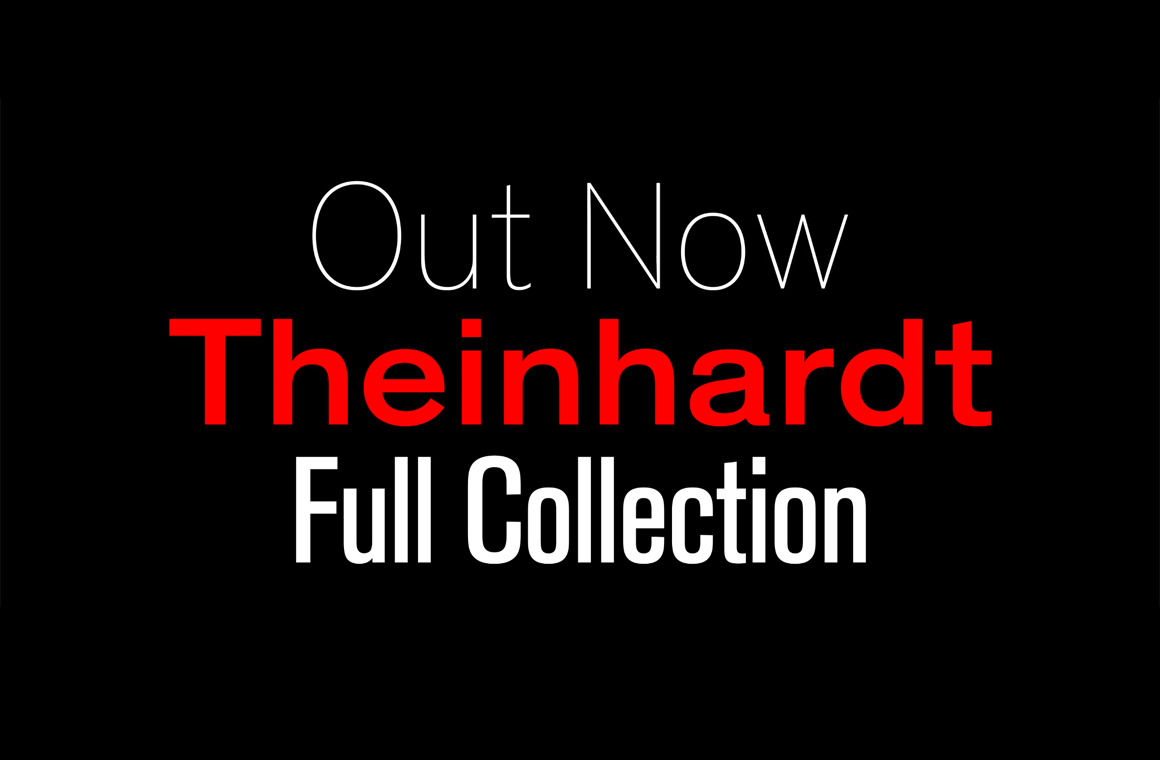 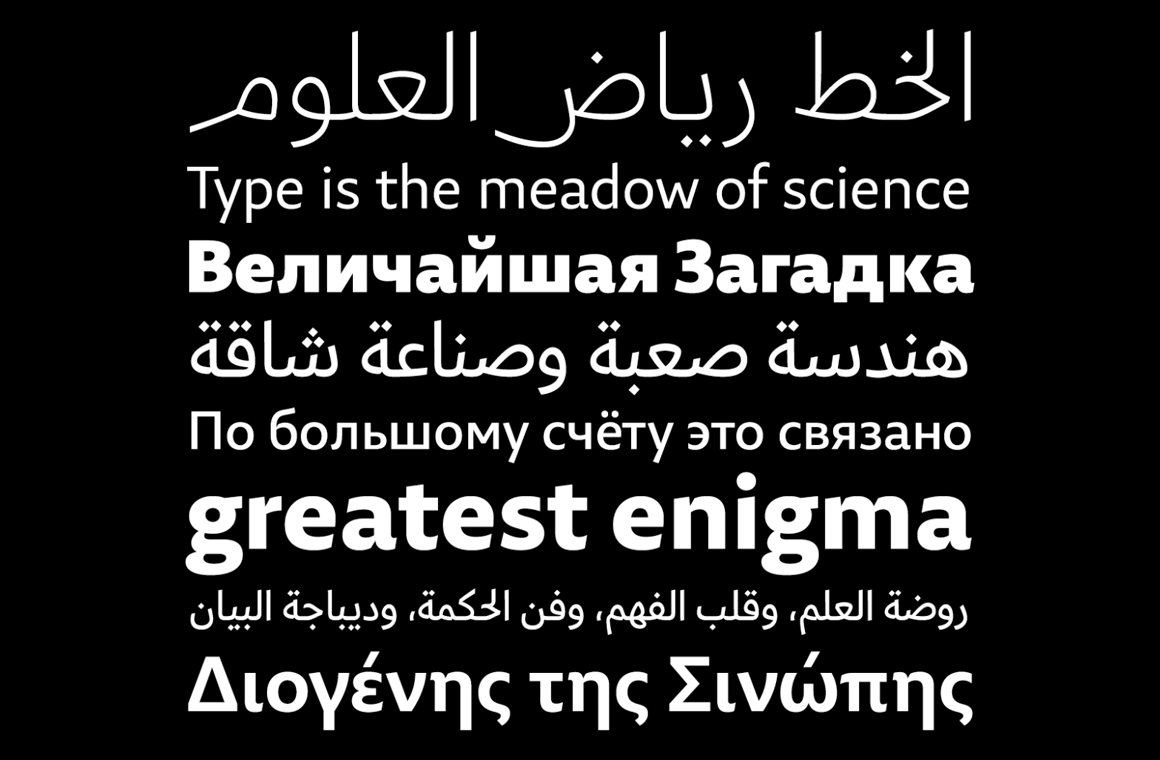 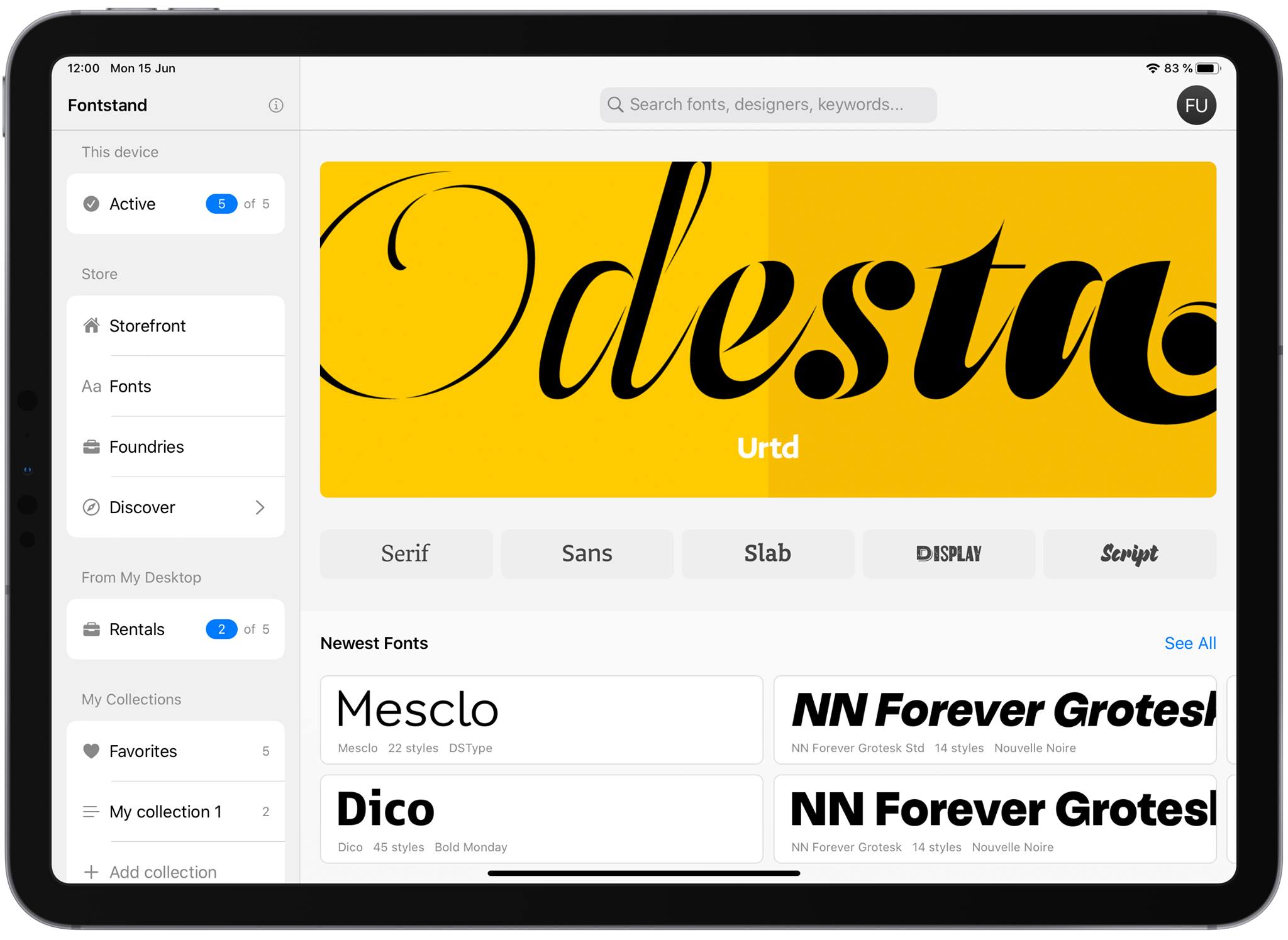 The Fontstand application, allowing for renting fonts (and even leasing them), has released its iOS version: great news for those who prefer to design on iPad. 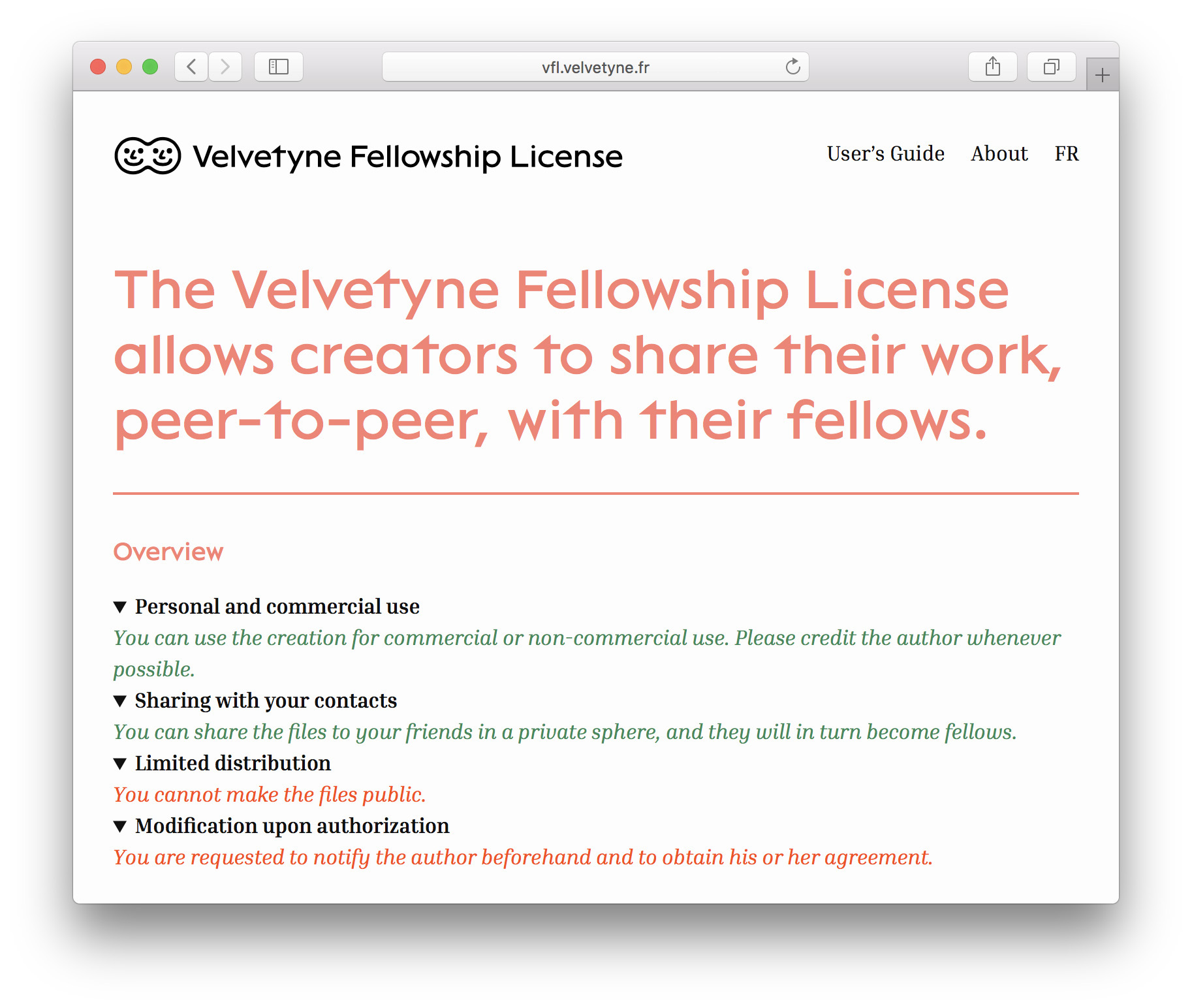 Velvetyne Type Foundry came up with an interesting license for fonts (and not only that): Velvetyne Fellowship License implies free, but proprietary distribution — that is from one user to another, no publication. The project sort of brings users back to the pre-internet times, where the only way to get access to free content was knowing somebody.

Designers are our partners. A very modern, advanced approach.

That’s interesting — and I wonder how soon people would eventually leak the content, making it available to everyone. 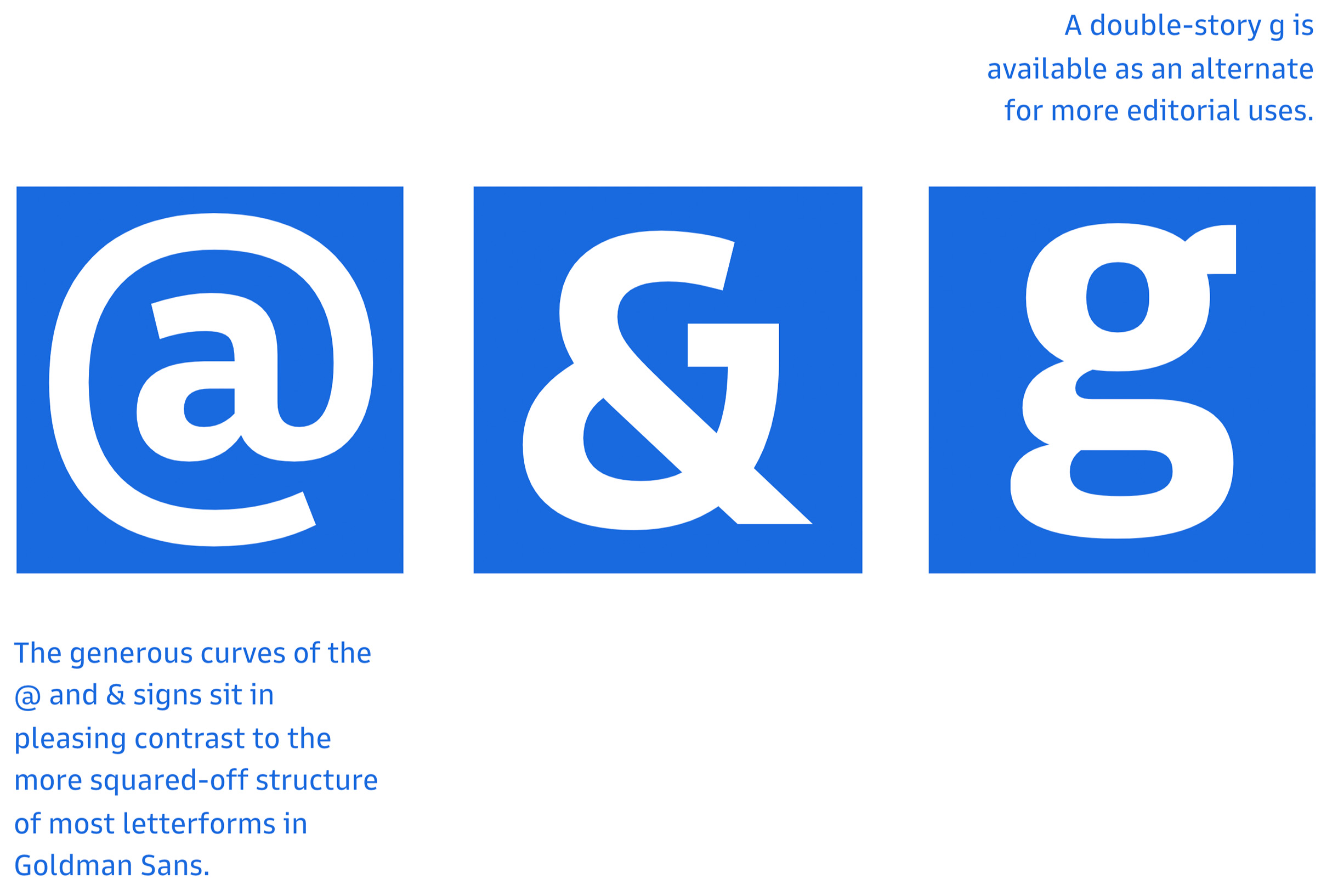 The investment firm Goldman Sachs now has its own typeface: Dalton Maag has designed an open sans serif with the focus on its legibility at small sizes — and numbers, naturally. The most interesting thing about this new typeface: available to download for free, the font’s license stipulates that the user may not use the font software ‘to disparage’ Goldman Sachs. Plus, the corporation may terminate the license at its sole discretion.

Great idea for a startup: first you release a free typeface, then, a couple of years later, you terminate the license without prior notice and bring to court anyone who continues to use it. All right all right, it’s just their legal department willing to do anything to protect the company — by their own, very particular, means, having nothing to do with type. 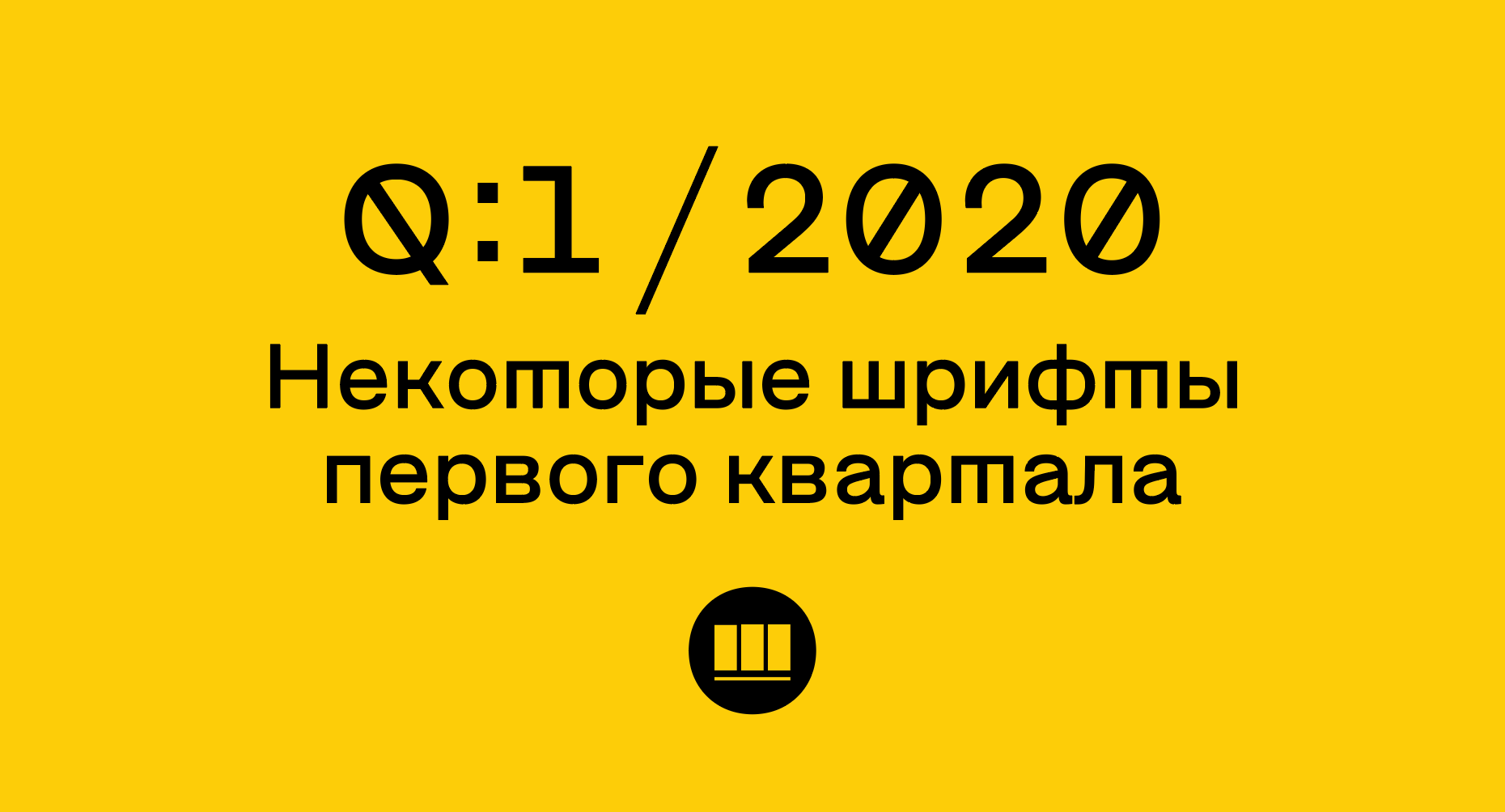 Type Journal (Schrift) sum up the intermediary results of 2020

Type Journal (aka Schrift) published a list of the noteworthy releases equipped with Cyrillic of the first quarter of the year, made up of the voting results by 20 ‘type and typography professionals’, unnamed. As for the results of the second quarter of 2020, Shrift invites and encourages everyone to take part in their assessment by evaluating 40 type releases on a 2-point scale. Go for it (if you want and feel you have enough competence)! (Warning: the FB posting is in Russian) 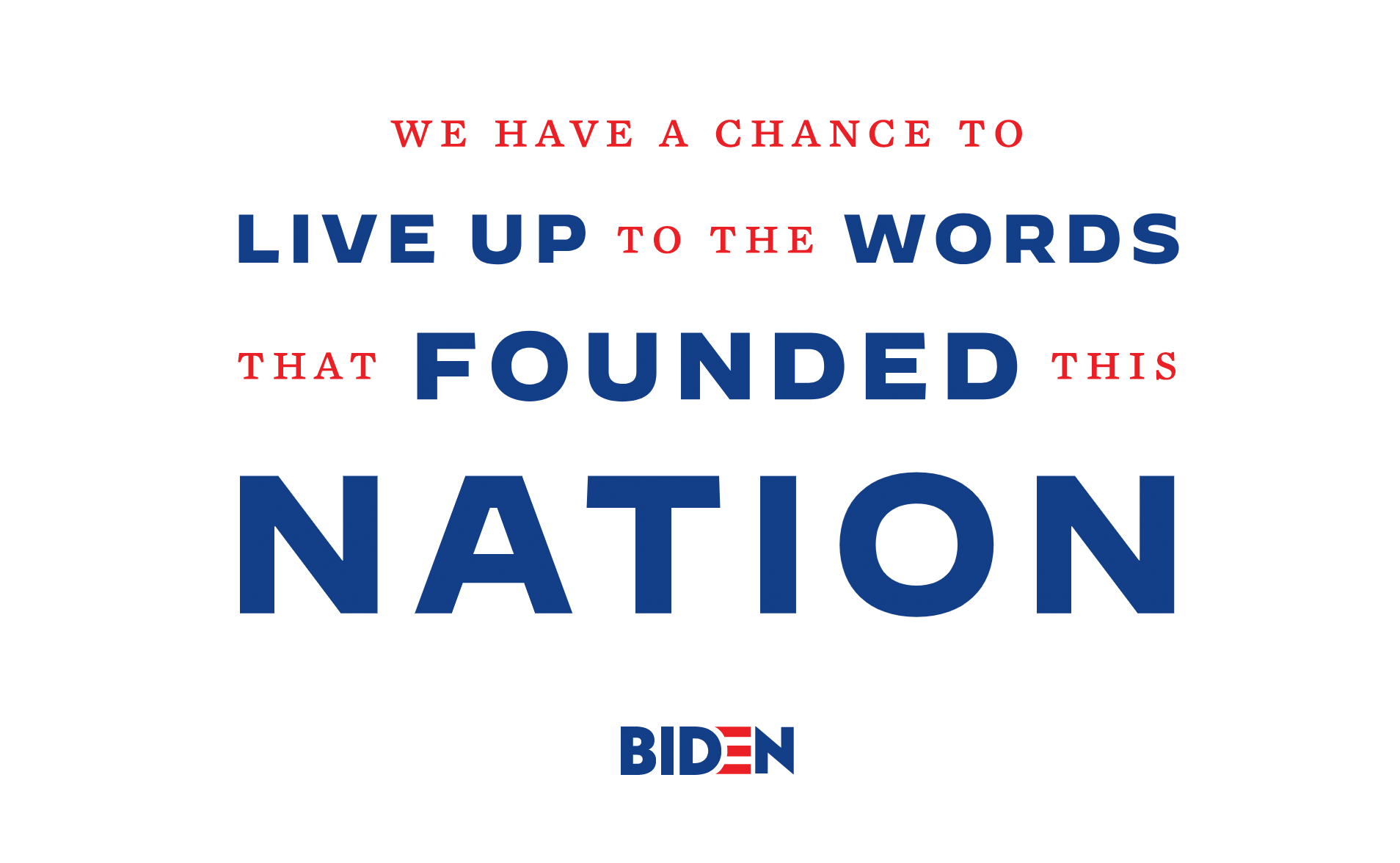 Hoefler&Co designed a type system for Joe Biden’s presidential campaign, it employs Decimal and Mercury from the studio’s catalogue. Earlier, H&Co handled the typography of both campaigns of Barack Obama (Gotham), as well as of The Office of Barack and Michelle Obama (Ringside).

Sometimes it feels like centrism is one of the most convenient and beneficial strategies for a politician. Generally, any political branding is driven by centrist values: stable, secure, all-purpose, — and doesn’t rock the boat.

I highly recommend two books containing a massive review on cultural and graphic legacy of the political branding in the US: Long May She Wave: A Graphic History of the American Flag and 100 American Flags: A Unique Collection of Old Glory Memorabilia. 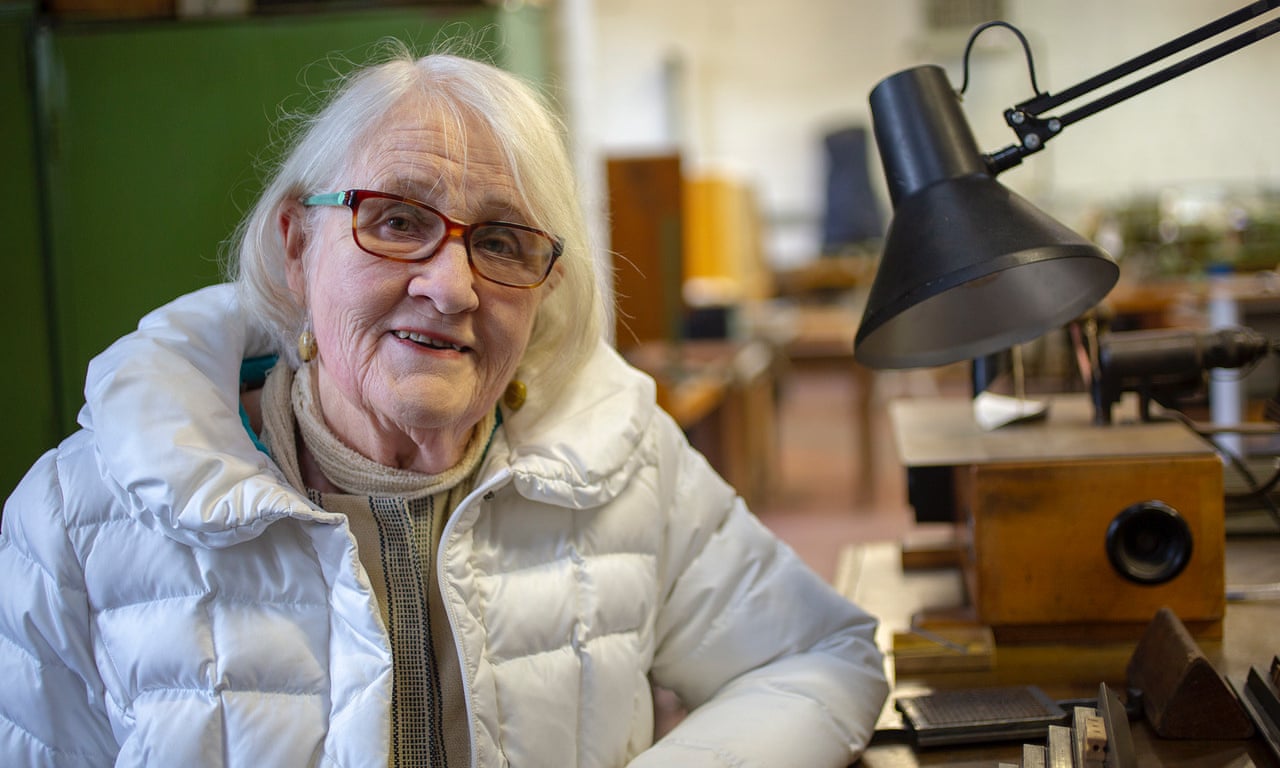 Susan Shaw, founder of the British Type Archive, died 13 June 2020. In 1992, this collection was created building upon the letterpress printing equipment from the Monotype Corporation’s factory — when the original company, unable to compete with the photo-typesetting technology, ceased to exist.

Barcelona-based design studio Pràctica created a visual identity for the Basque music project ZETAK. The key element of the system is a custom neo-grotesque typeface Arbizu, injected with whimsical Basque alphabet letters. The result is an amenable — but very charming — monster, perfectly working on posters and merchandise.

The project comes with a research on shop signs and books about Basques; you can also view the project through the lens of punk graphics of the 1970s — it would work, too. 😁 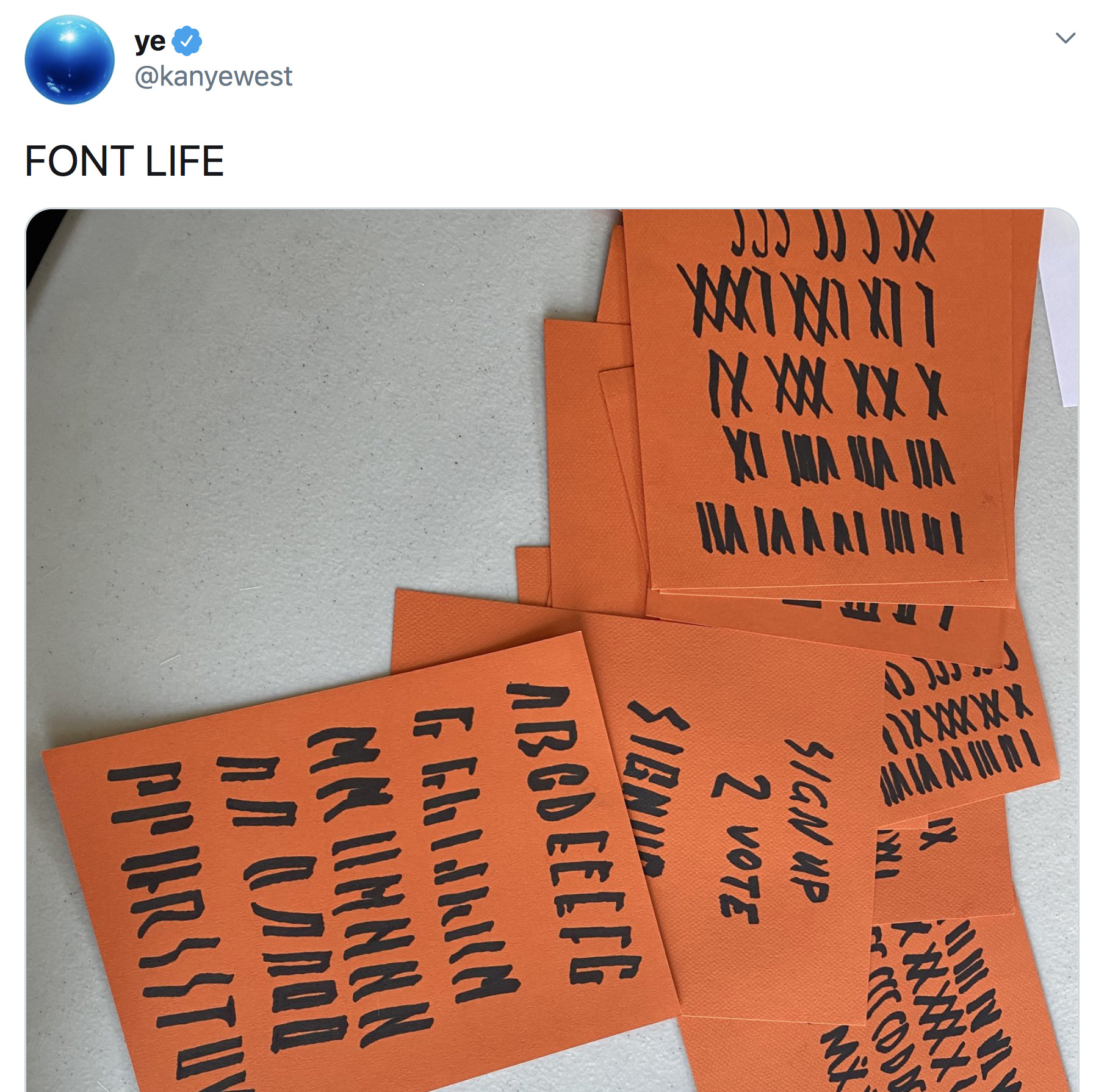 Kanye West created a future font (no, he didn’t)

Kanye West tweeted that he was ‘hand designing a 2020 future font FTR FNT’. The marker pen drawings he shared can hardly be assessed from a professional perspective, although they got thousands retweets and, apparently, were translated into a font file. As Typeroom reminds us, this is not the first time that Kanye reveals his love for type: in 2015, he confessed that ‘sometimes he gets emotional over fonts’ — type designer Tyler Finck took advantage of this tweet and offered him a bespoke font, designed especially for Kanye and priced at 50,000$, — Yeezy Display. (got no response).

It’s too bad the font is not as insane as the very phenomenon of Kanye West — it is already way beyond the meta-modernist absurd, and extremely interesting but only as a phenomenon, but not as a genuine event.

Check out the difference in the writing of certain symbols in a row — z, x. It seems like he just enjoys the way movement of his hand and positioning of the nib affect the result. That is, the difference between the planes of a marker pen and a broad nib.

Which reminds me: if Kanye himself now tries calligraphy to educate himself, it is definitely time for the rest of us to stop finding excuses and postponing our analogue experiments for the future. 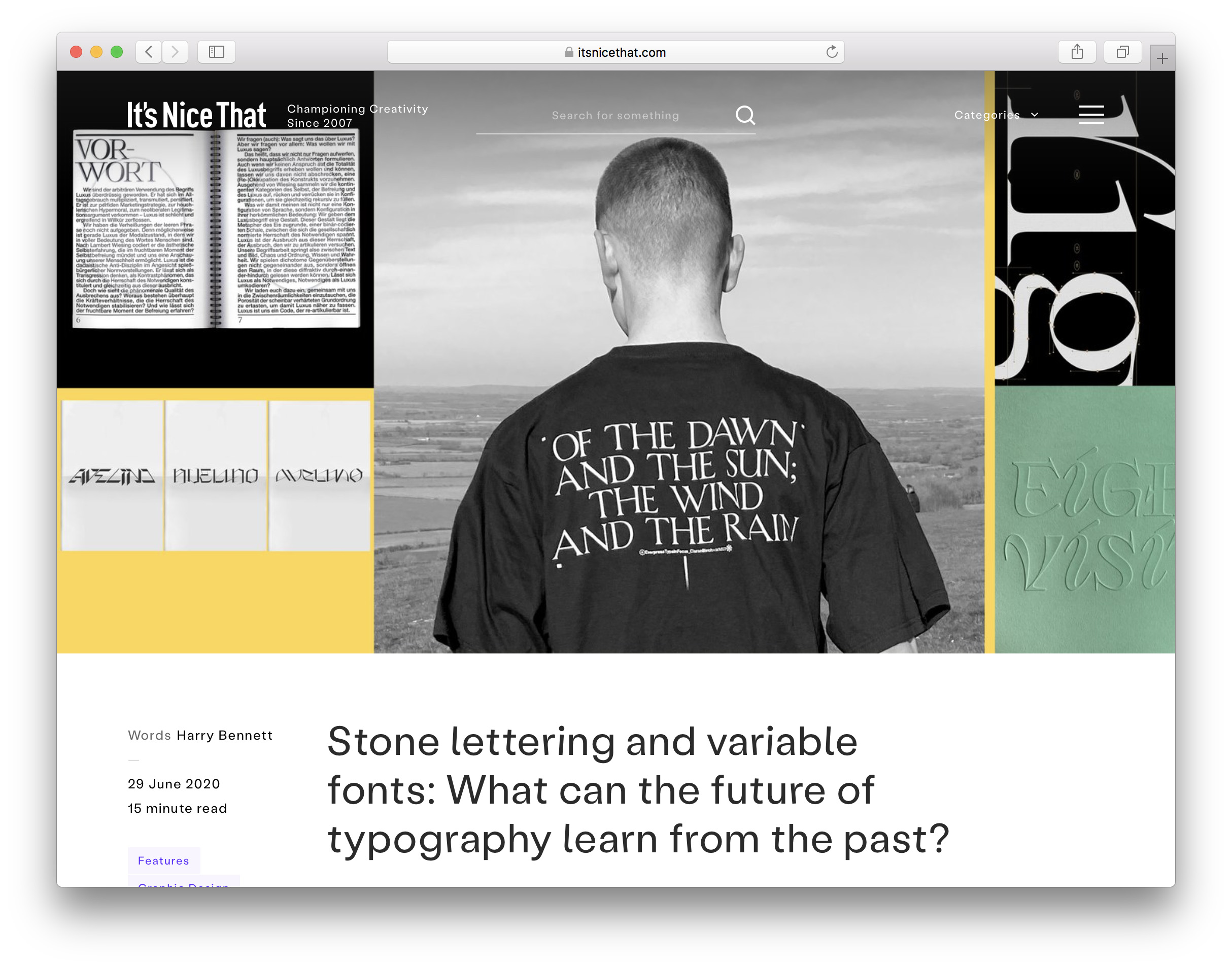 Typography in stone, typography on screen: what unites them and what can they learn from each other?

Harry Bennett of It’s Nice That has talked to stone letterers as well as contemporary typographers to find out how they perceive the development of contemporary type and typography — and how they view each other. 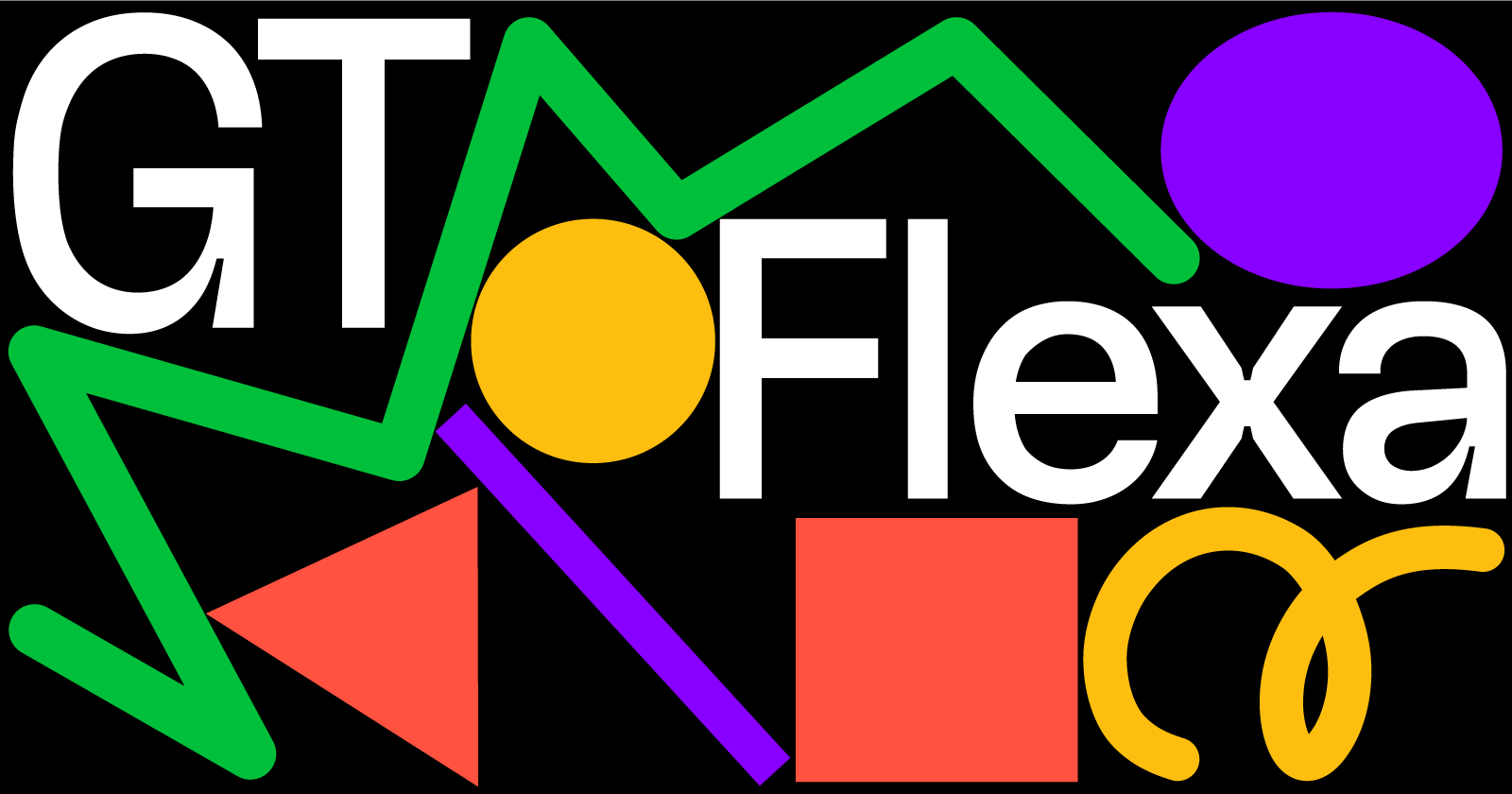 The most variable sans serif, made by Grilli Type

Grilli Type are pushing the idea of variable font to its extensive limits: in July, they presented a mega sans serif typeface called GT Flexa, which, judging by its promo website, can take any shape, literally. February saw their release of GT Alpina — same thing, but serif-style.

One can say it is all about compensators and other kinds of the sans serif fun — but what I see here is one madly relevant italic. 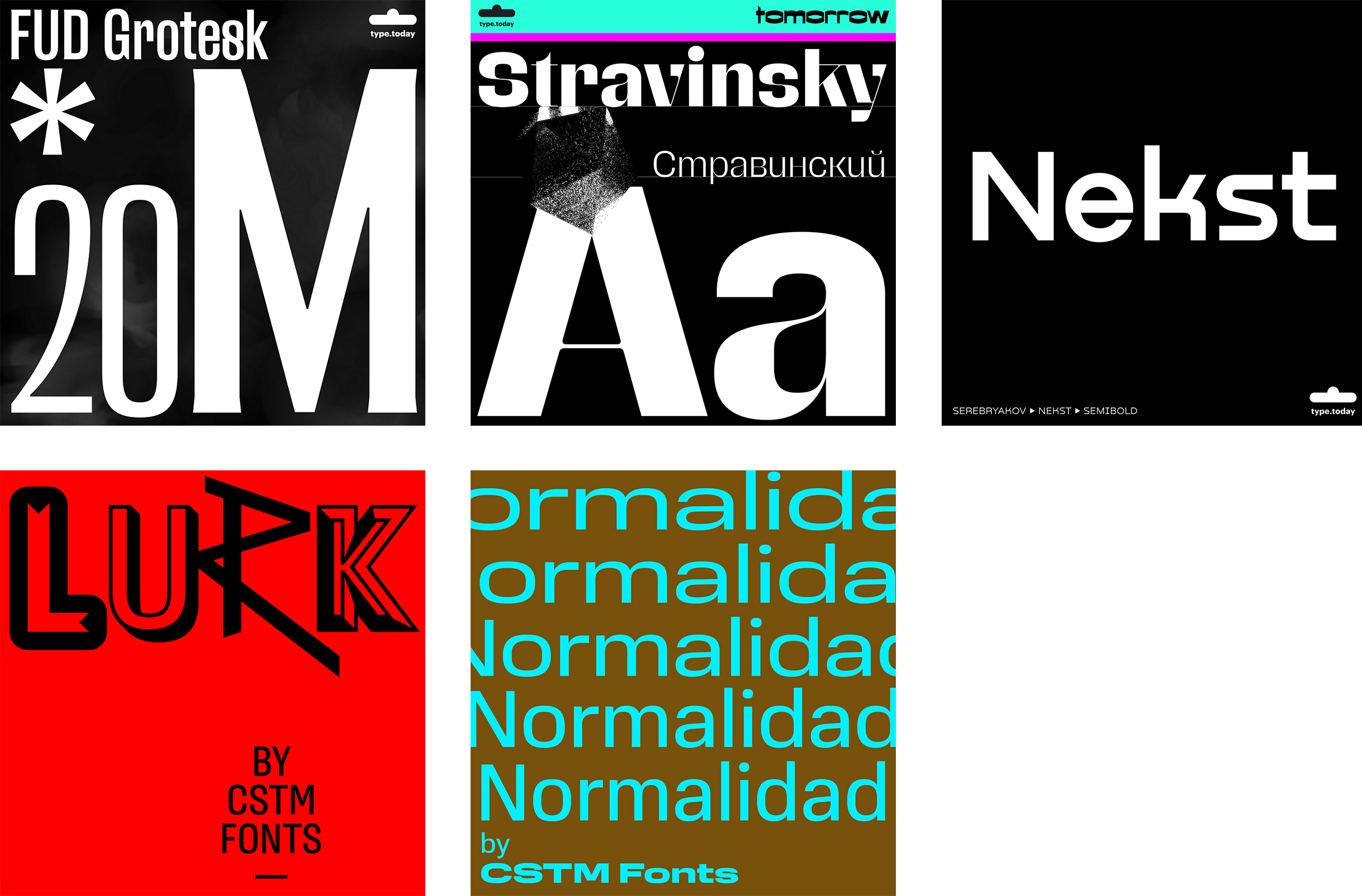 This July happens to be unprecedented: never before have we had so many new typefaces coming out in one month. Sans serifs with various degrees of geometric and display personality — FUD, Stravinsky, and Nekst, — but also two large typeface families from CSTM Fonts, the super display Lurk and the super versatile Normalidad (we came up with an innovative, curious offer for both!)

The Italian Archivio Tipografico is carrying out a project for reissue and translation to English of the book Alpha-Beta by Aldo Novarese, originally published in 1964. Aldo Novarese is an Italian designer and type teacher, founder of Nebiolo Studio, author of dozens of various typefaces (including Eurostile, which you definitely saw many times). It is a rare example of a large book on type written and laid out by a practicing type designer (what is more, not from the English-speaking world). The Kickstarter campaign was launched on 29 June; a week later, it raised the target amount of 30,000 euro; by 1 August the money raised almost twice exceeded this number and the campaign was closed. 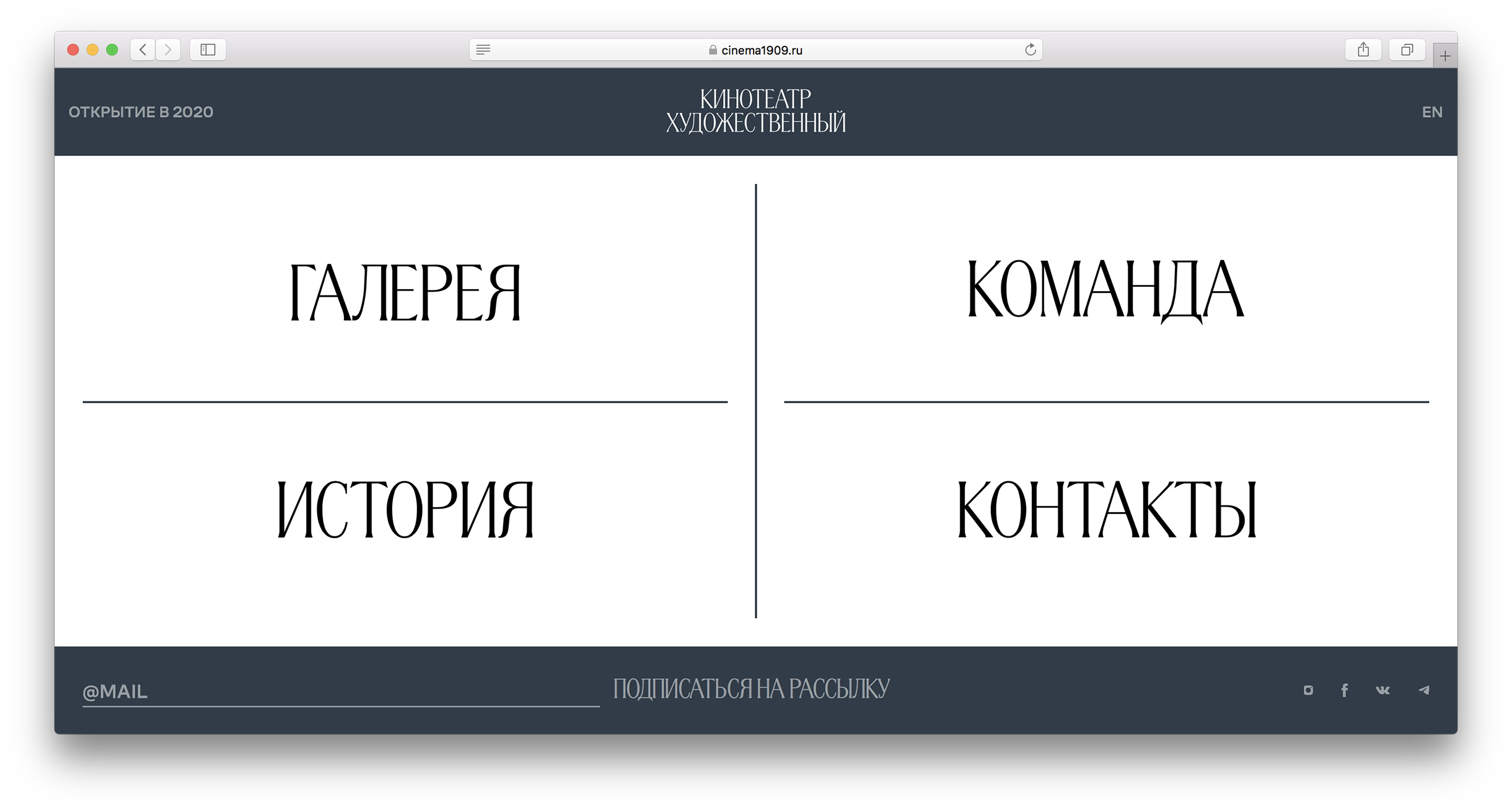 The Khudozhestvenny Cinema is back — with its new bespoke typeface

The Khudozhestvenny, the oldest Moscow cinema, will re-open after a long renovation process already this year. The visual identity created by Anna Kuluchek; the corporate typeface designed by Contrast Foundry.

I’m sorry for being biased — I by default adore and admire Contrast Foundry and what they do, — and I believe it is a great font. If we dig deeper, we could see its moves and its background, but sometimes you just want to look at and enjoy (even if you are a professional) — and this is exactly the case. 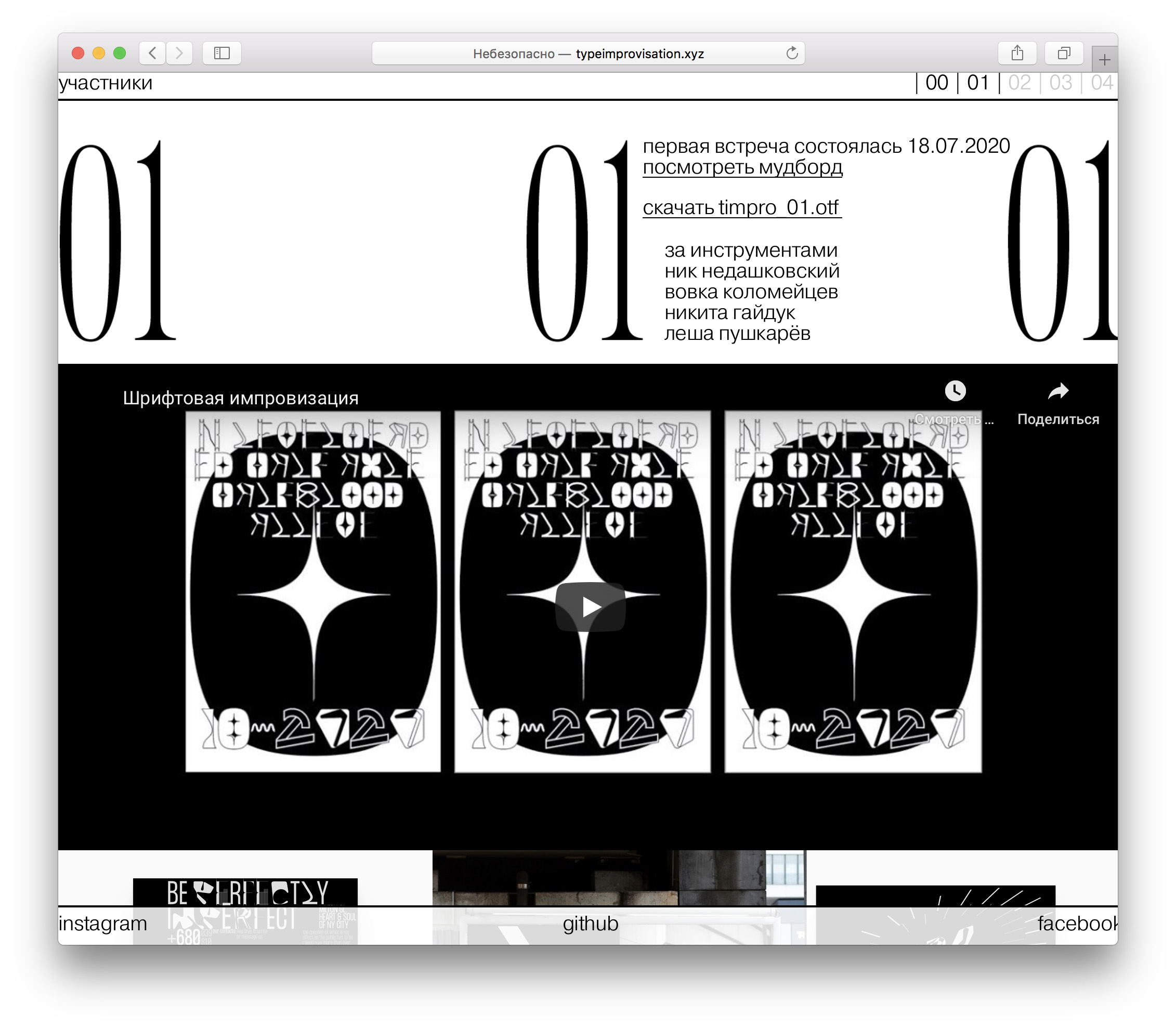 Typeimprovisation: a typeface, collectively designed in a matter of hours

Nick Nedashkovsky, a type designer with Paratype teaching at Bang Bang Education, created online sessions titled ‘collective type improvisation’. The idea is to bring several designers online for communicating and drawing a super fast typeface on the base of a mood board. The first session was attended by Vladimir Kolomeitsev, Nikita Gaiduk, and Alexey Pushkarev. You can freely use their resulting font file.

This session (as well as the Artefact sessions from Schrift) proved that our Cyrillic type community is craving for oral communication. 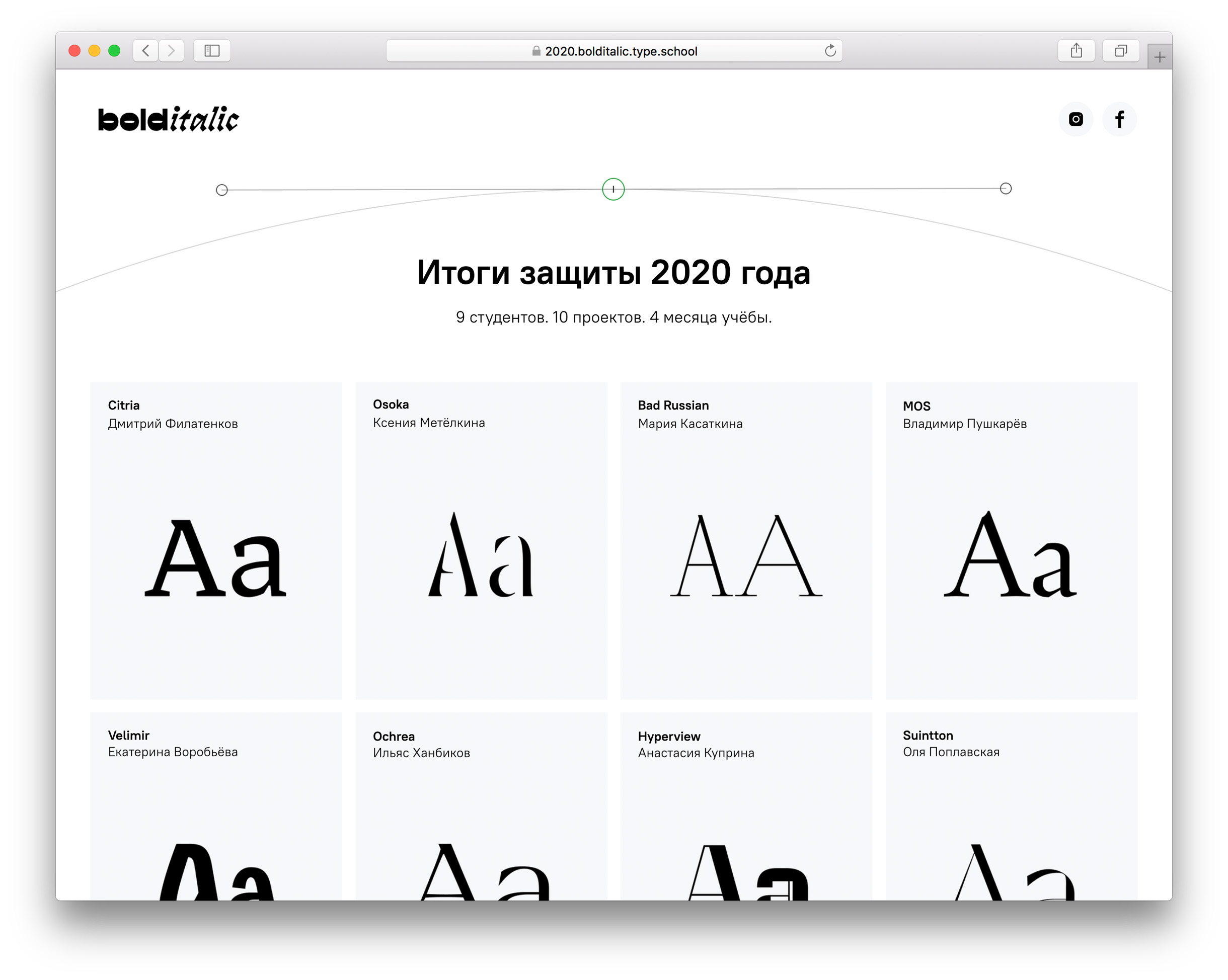 Bolditalic school will teach you the basics of type design in only a few months. Check out the works of graduates

4-month long type school Bolditalic (curated by Dmitry Golub, designer at Paratype) presented its first graduates. The projects were reviewed online (the video is available on Facebook), and you can look up these typefaces on the web site (some of them are interesting ones, especially considering that these are very quick debut works we’re talking about). 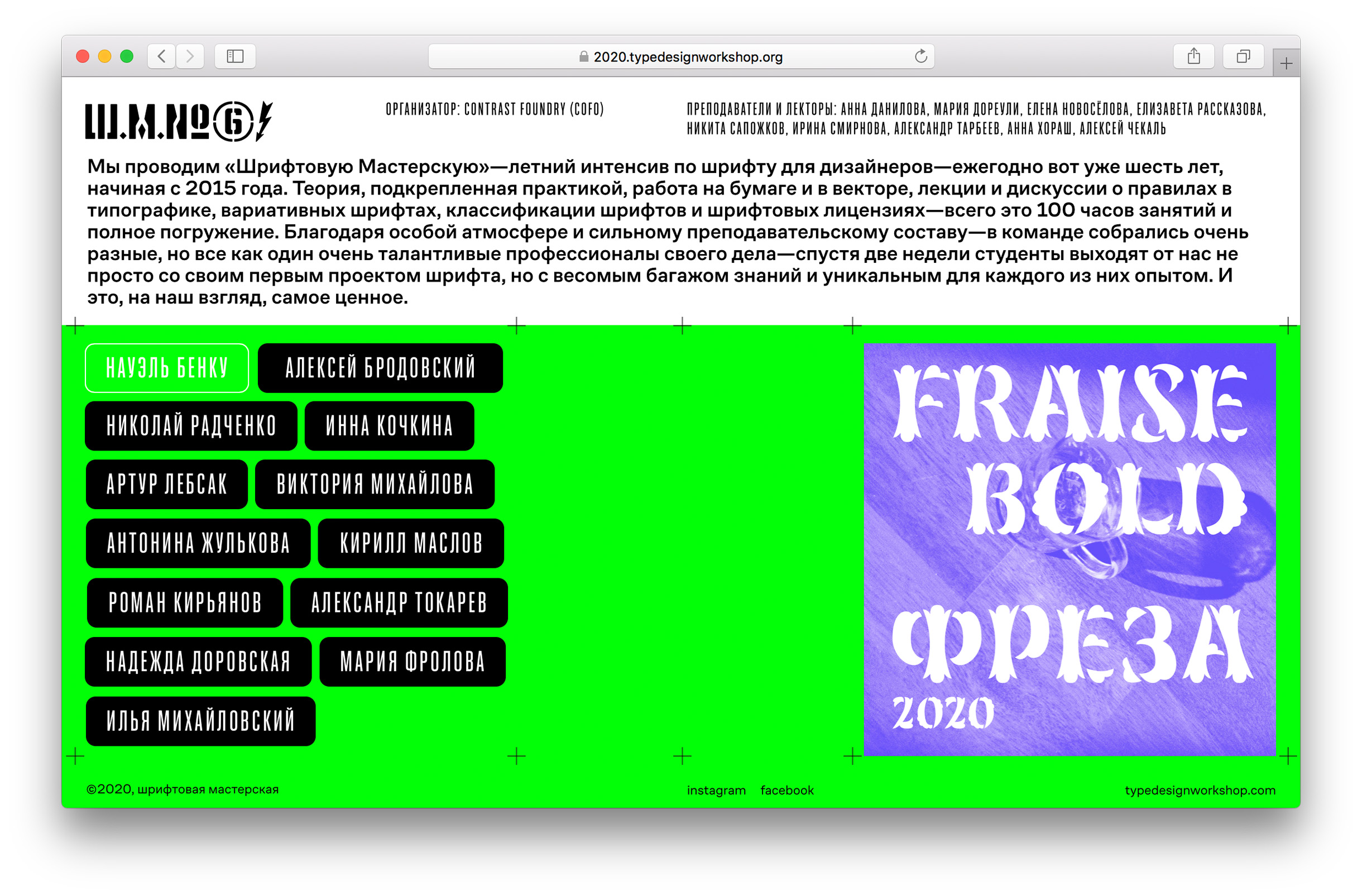 CoFo’s Type Design Workshop took it to Web, turned out even better

The 6th Type Design Workshop by Contrast Foundry was held online. As mentioned by the organisers, during a 10-day-long intensive course only less than one third of its participants were actually in Moscow. The students used the old signage from public transport as a reference for their projects, however all 12 typefaces turned out to be very different both in terms of their genre and their character, — go check on a special web page.

Pretty awesome that now those are presentations and real references in real life. The typeface lives, not just exists in a vacuum. Personally, I preferred the work by Arthur Lebsack — in fact, I am ready to use it right now, for any visual identity project on a serious commercial level. Pixel fonts, that’s always a very narrow and seemingly dry topic — and such a bright breakthrough is quite refreshing and it gives hope for life, really. I also very much liked the typeface by Nauel Benku — for its complexity, variability, astonishing relevance, and romantic angst. Honestly, I wouldn’t have dared to draw something like that — but she did it, and it is so cool.

In July, our Instagram was run by Roma Lazarev. We want to thank him for the excellent movie posters!