December in fonts, as chosen by TypeCache

Akira Yoshino, Taro Yumiba, and Shohei Ito follow type releases all over the world on a daily basis. Here are ten most interesting typefaces of December, according to them.

![1ak] Aktuell, published by Type By. Pick by Akira Yoshino 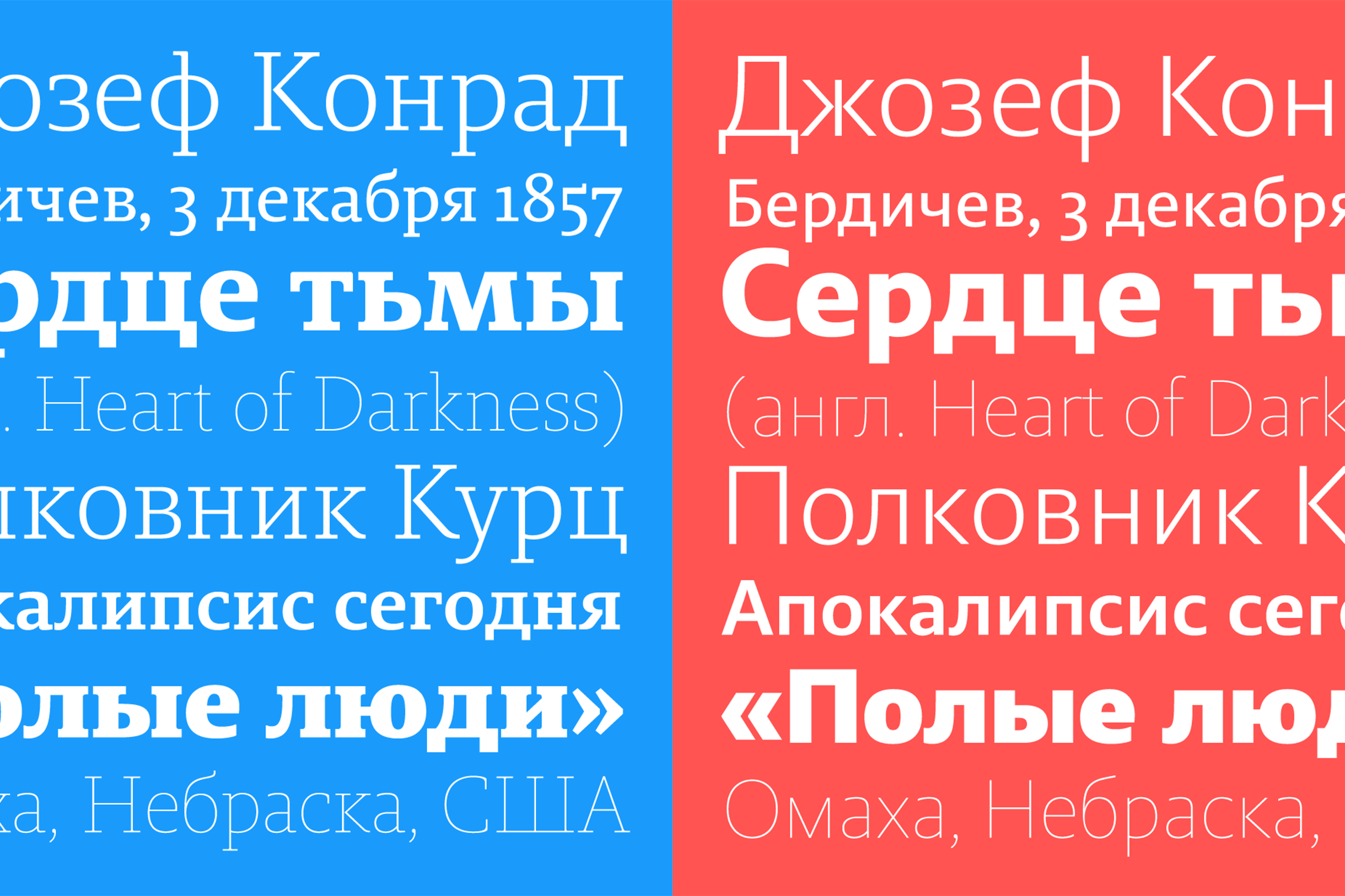 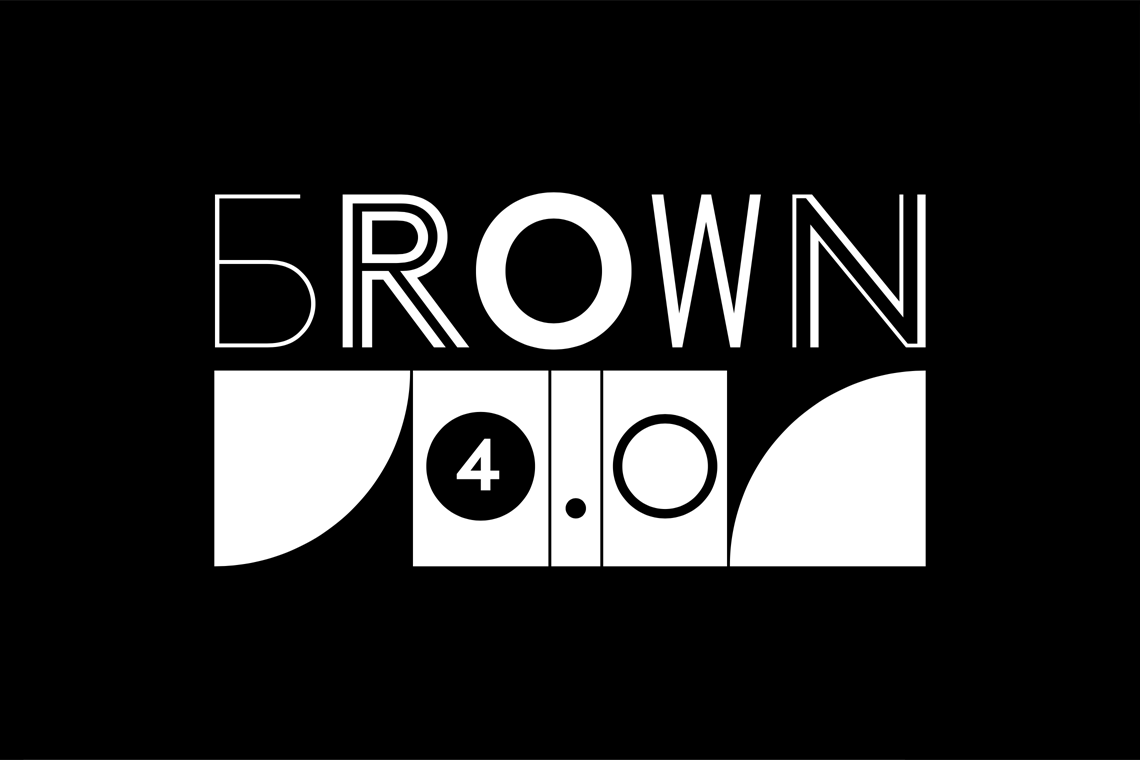 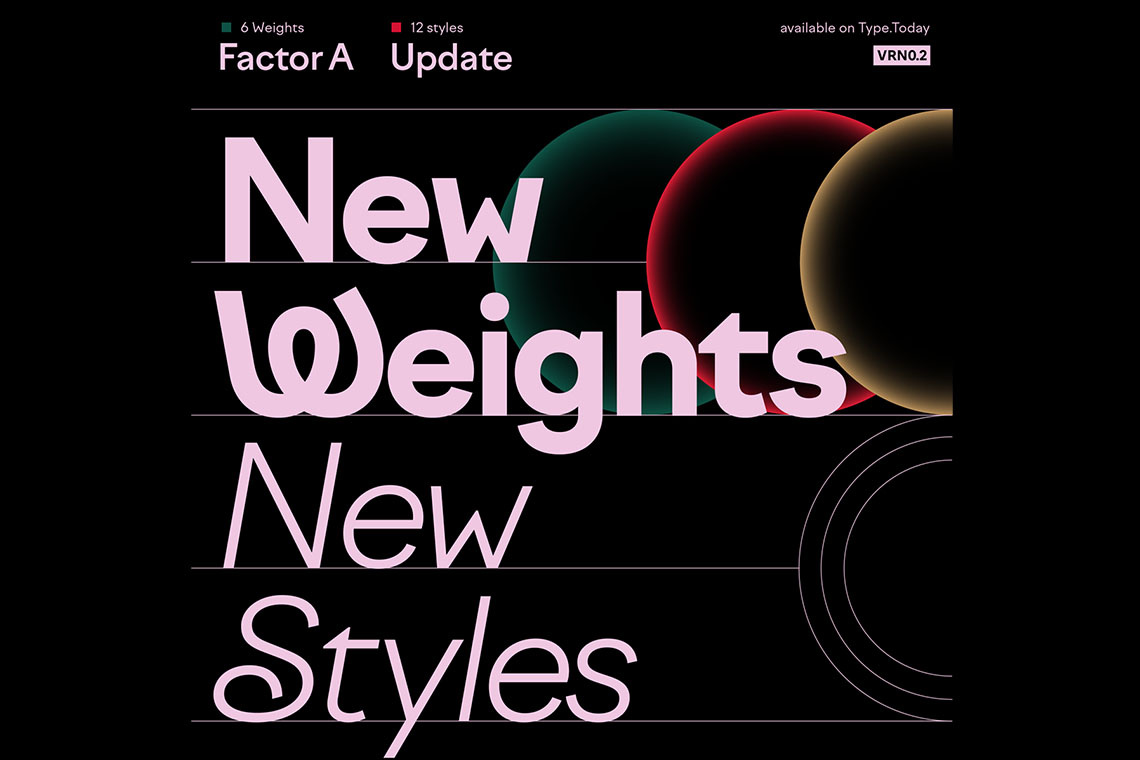 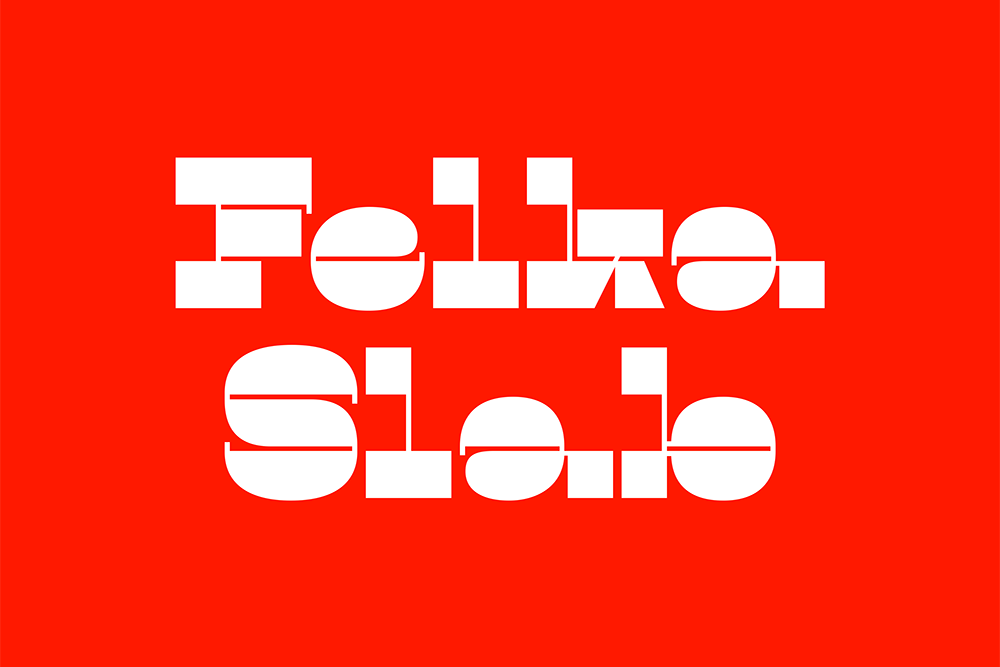 Felka Slab, published by Type By. Pick by Akira Yoshino 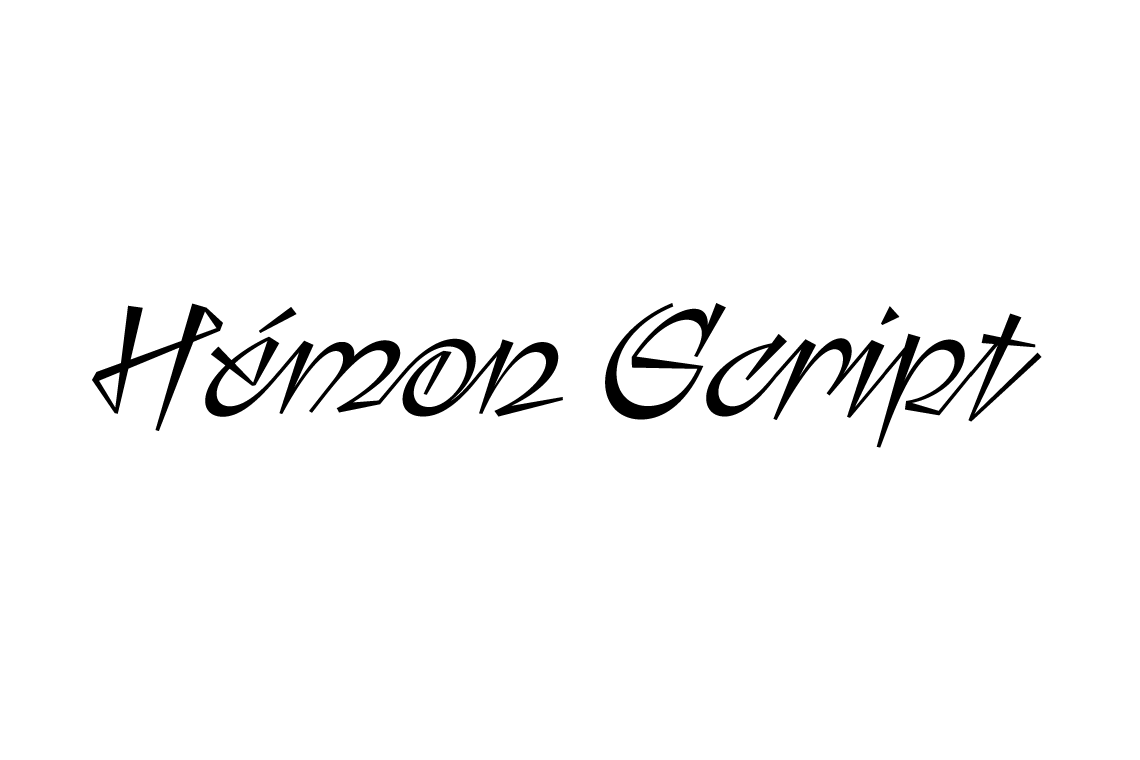 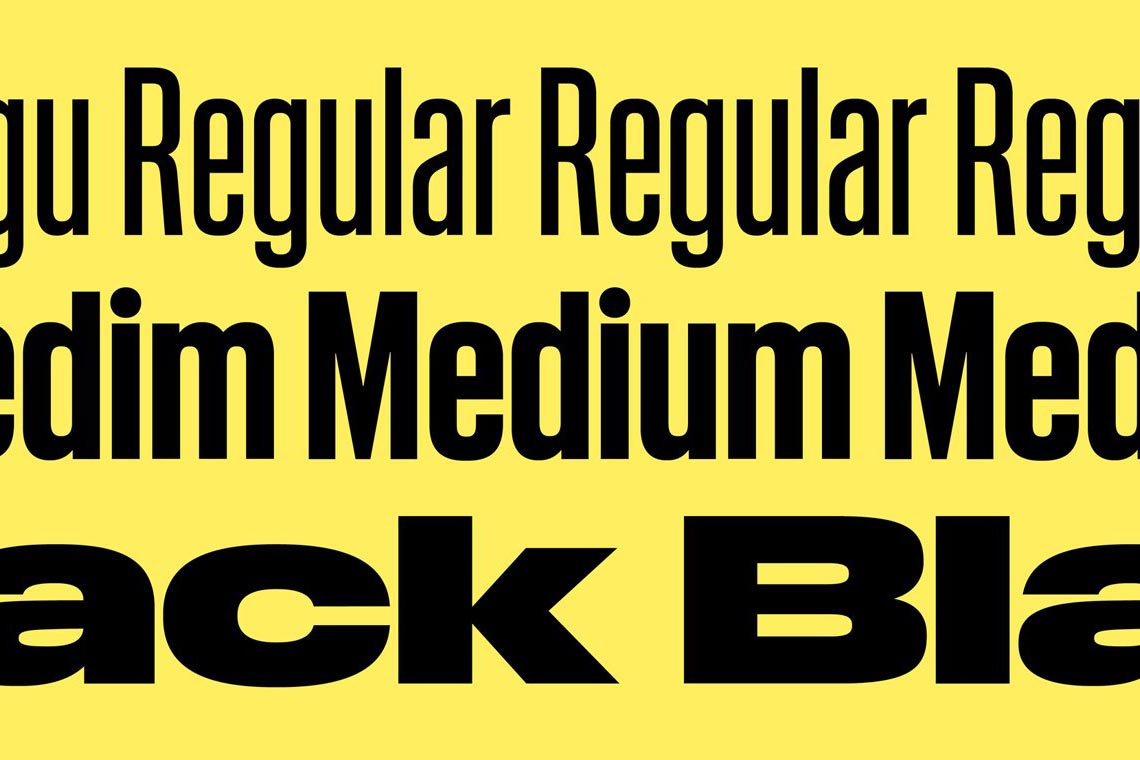 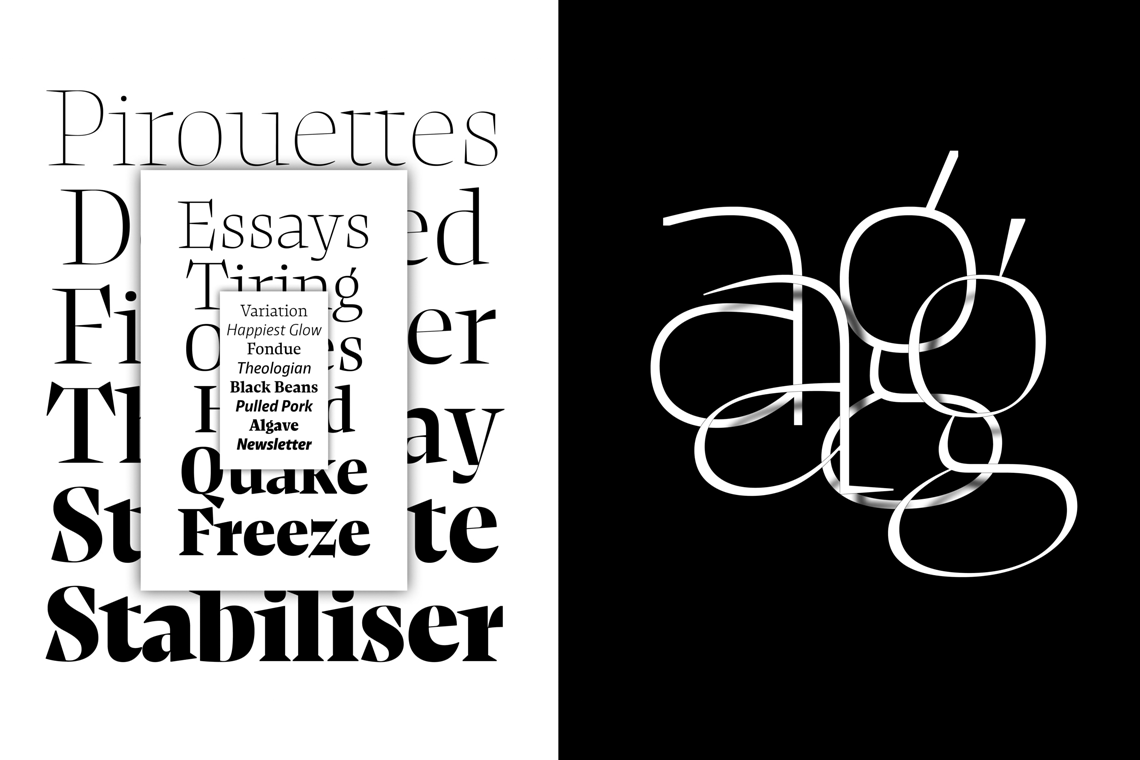 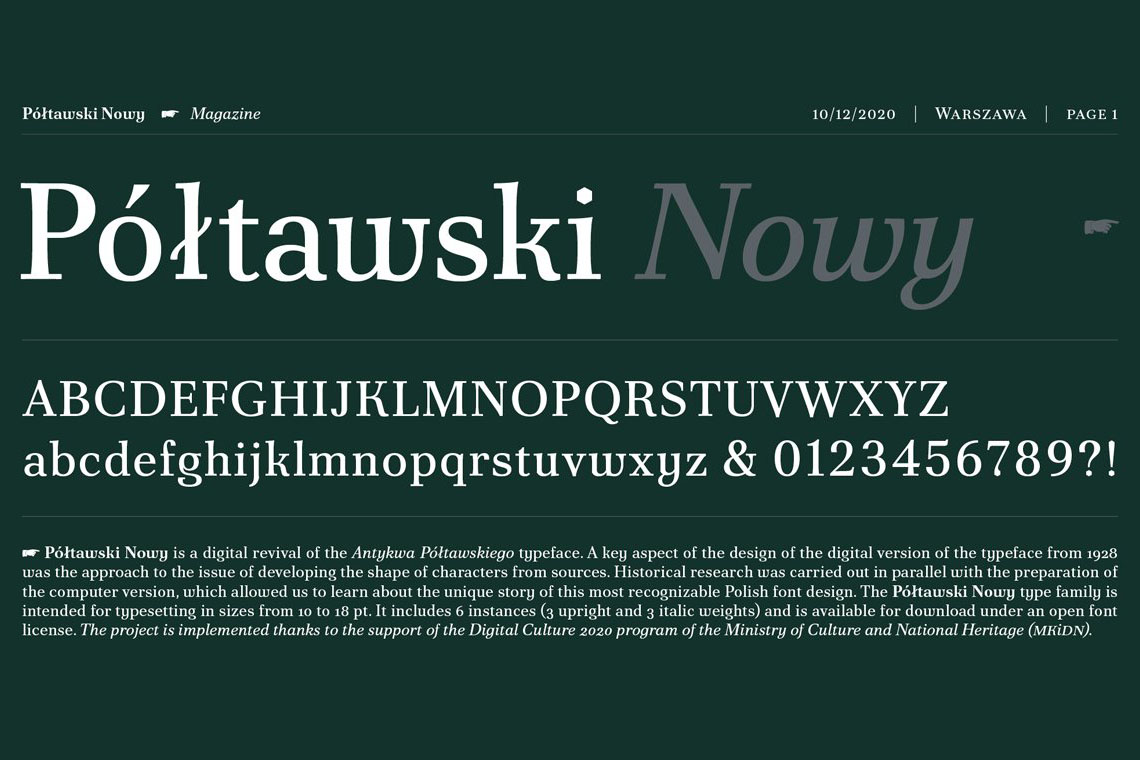 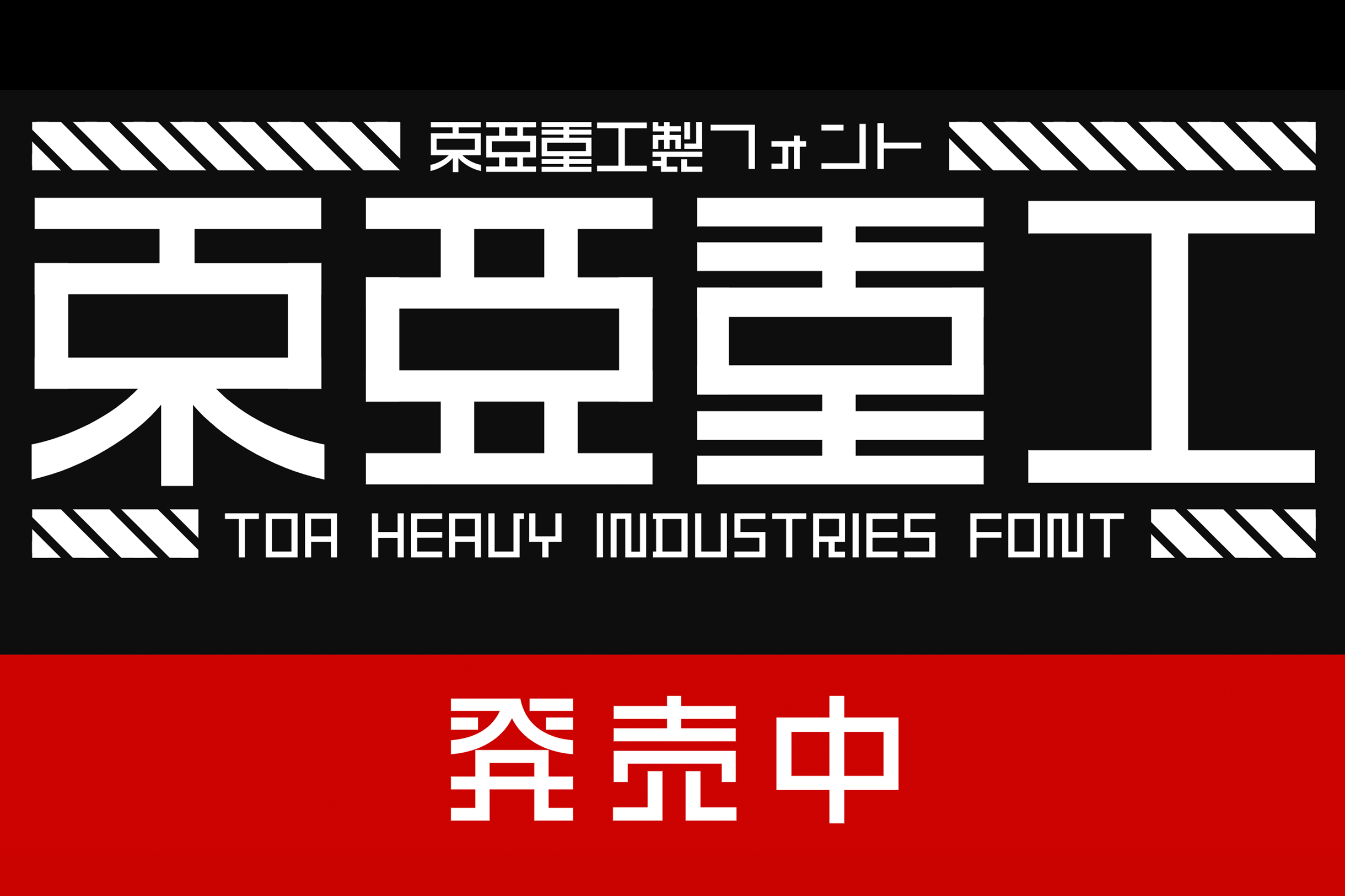 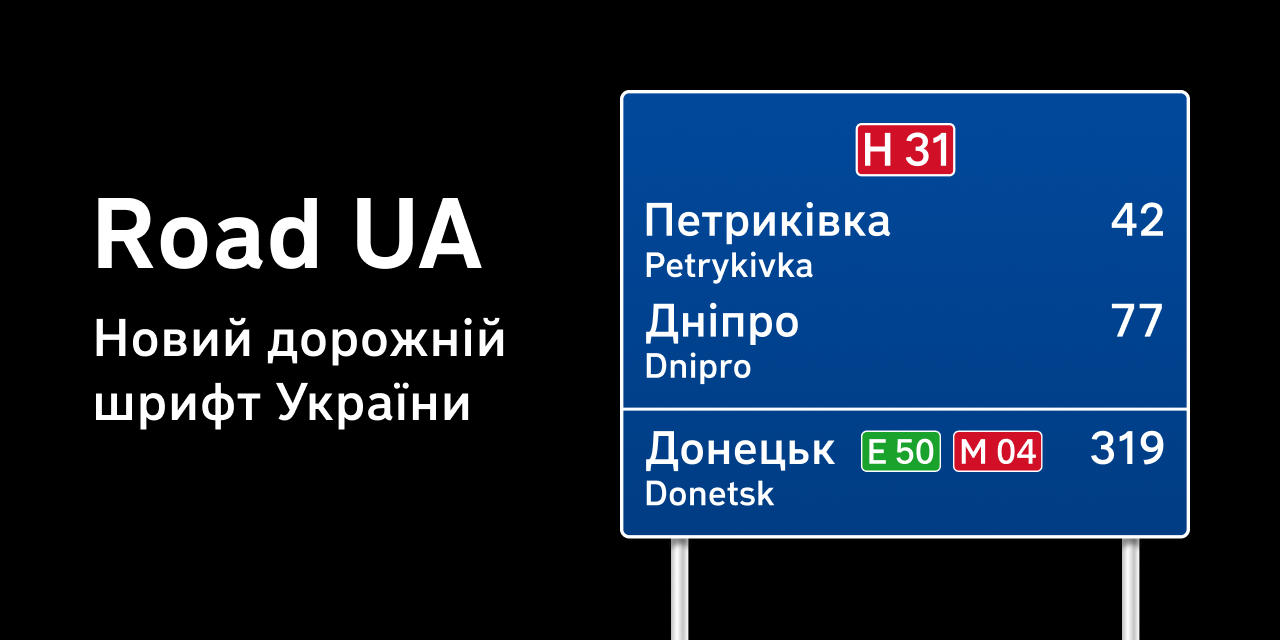 The nonprofit group Agenty Zmin does public space design across all Ukraine, from transport maps to architectural projects. In 2020 they completed a new standard for traffic signs which will be tried on 11 Ukraine’s highways. Especially for the new signage, Andrey Kostantinov (Mint Type) designed the RoadUA typeface to be distributed under a Creative Commons license. The typeface has eight styles, ranging from Thin to Black, all equipped with generous sidebearings. 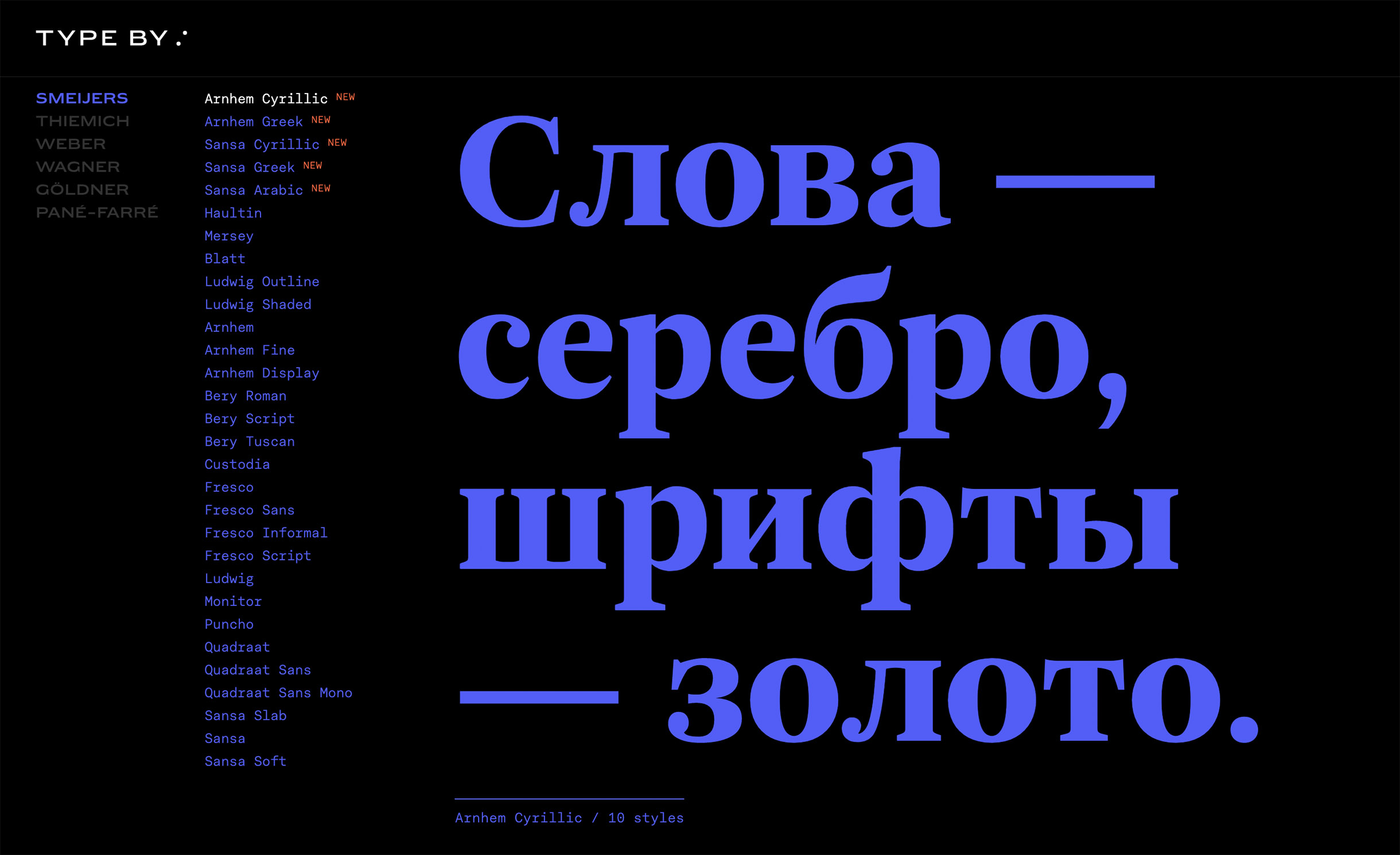 Type boutique Type By was launched by Corina Cotorobai and Fred Smeijers in 2019; the brand claims that their product is conceived and manufactured to ‘meet highest demands.’ In December, the library has been enriched by 19 new typefaces: Smeijers’ Arnhem and Sansa now have Cyrillic and Greek glyphs (with Sansa also possessing Arabic ones), while Thomas Thiemich designed a very beautiful Arabic set for the display Gustella with reverse contrast. The full list of novelties is available on TypeCache. 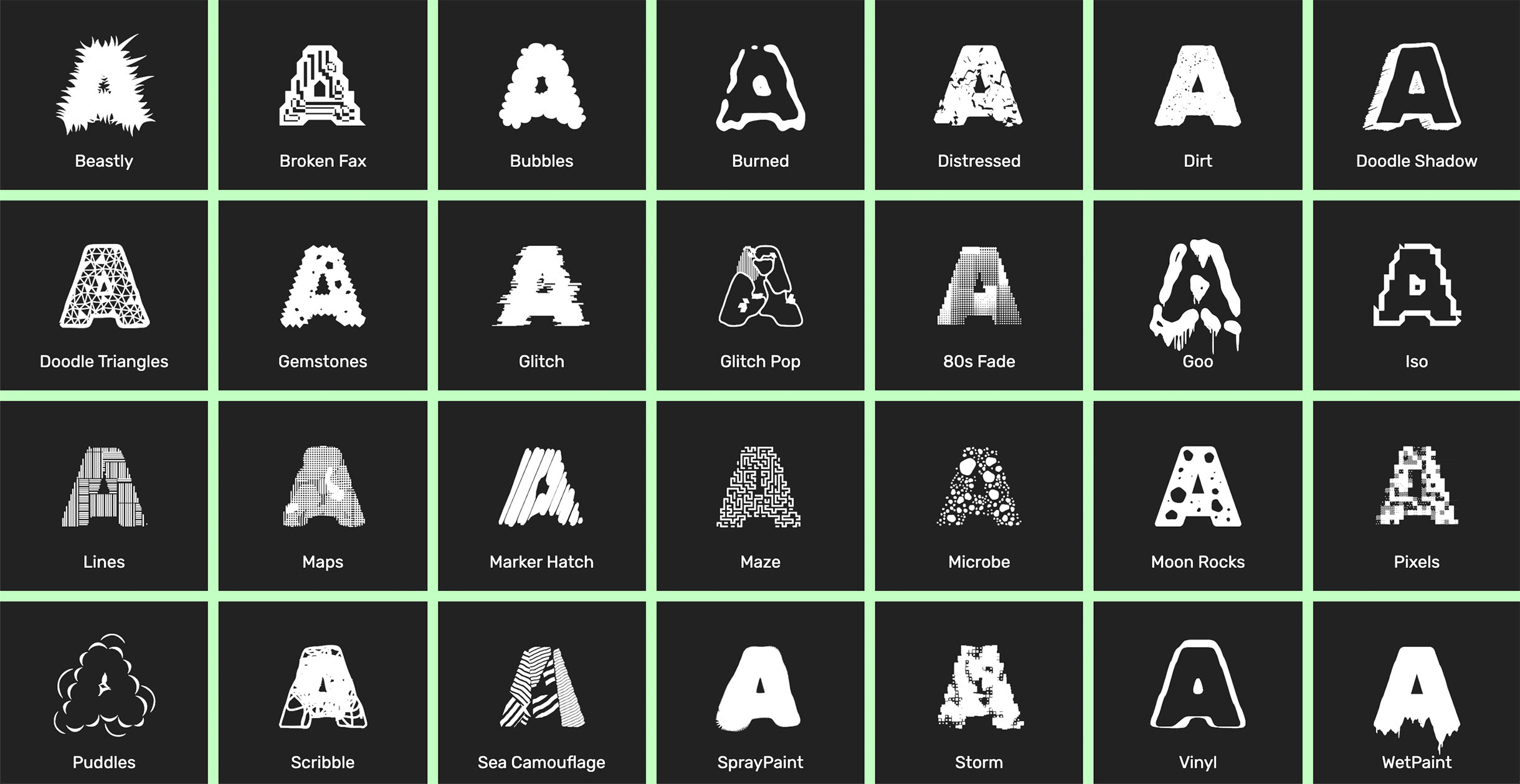 NaN studio wrote a Python script for producing wild digital grunge fonts. They used Rubik as an example and made the results, as well as the program, freely available. Easy to master, change, or feed the script any typeface you fancy, license permitting 🤫.

Highly recommended to anyone who is into experiments and coding. :)

And it is already on GitHub! I think the most valuable here is the code, you can use it as an effects library. 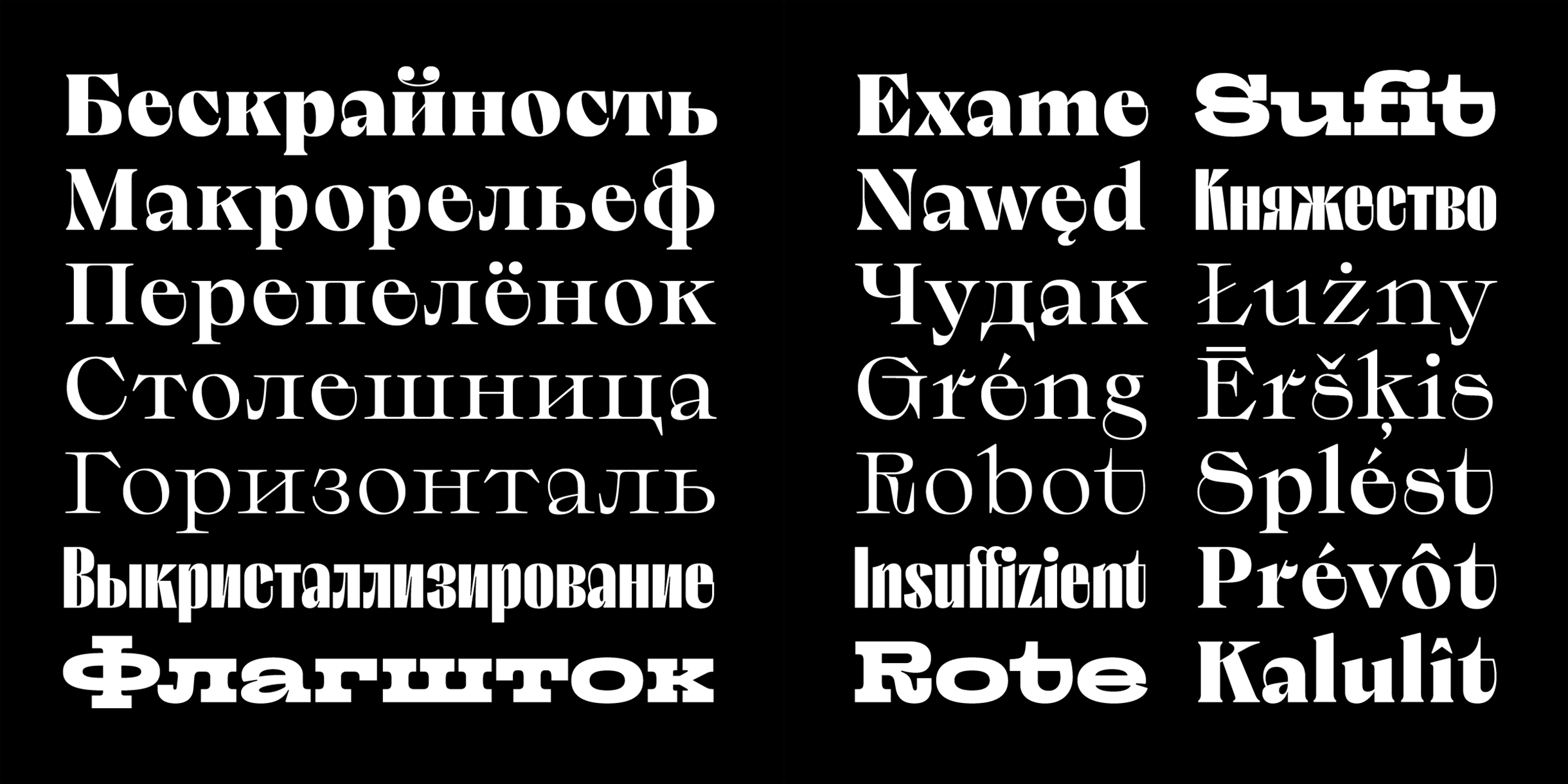 The multigenre Relaate, now in Cyrillic

Alexander Slobzheninov, author of Grafier from our Tomorrow library, released updates for his display Relaate. Since the initial release on Future Fonts, the project has become significantly bigger: back then it was only a wicked serif, while now it is both a whimsical handwritten sans serif and a wide Egyptian typeface. The last version has five additional weights in serif — and a Cyrillic set (for all styles.) 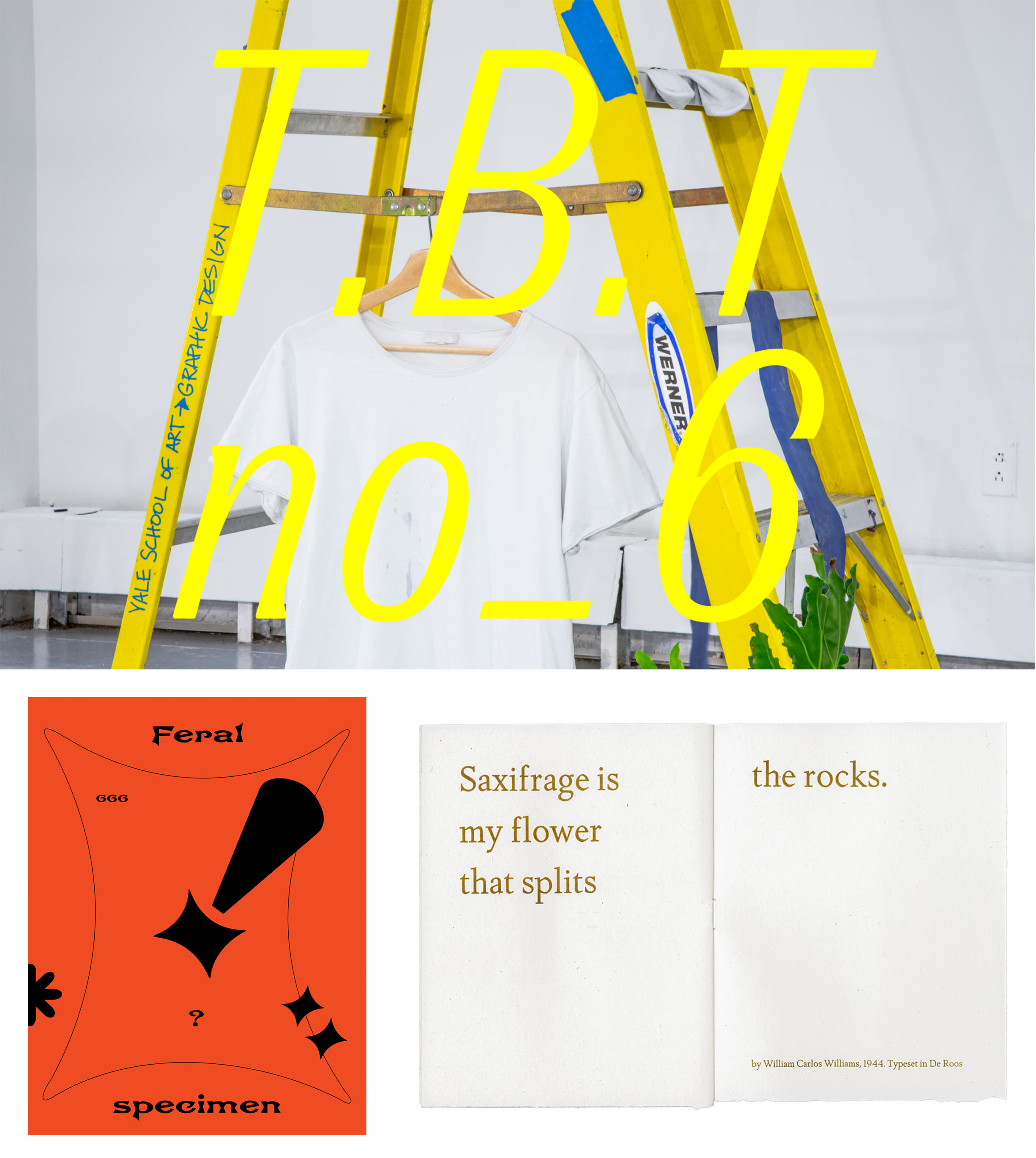 The BA graphic design programme at Yale School of Arts has a half-year elective course of type design. In autumn semester, the course is curated by Tobias Frere-Jones, with additional critique provided by Matthew Carter. The task is usual: designing a viable font, based on a historic specimen. Ten works made during the autumn semesters were published on a showcase website, and this is a great example of what can be done with no prior experience and under a tight deadline.

Yales students are nothing like Type&Media, but it’s always interesting to look into the work of young type designers. Still plenty of questions when it comes to contours, but the typefaces look well in text.

I took interest in French by Mike Tully, a typeface based on modern French serif dating back to 1909. Unlike other serif revivals, it doesn’t seek to refine details, make them narrower, bring more contrast, — on the contrary, it decreases contrast and makes the typeface kinder. Therefore the typeface changes focus a little bit: the renovated version of the typeface looks more book-like, unlike its sharp-toothed original. 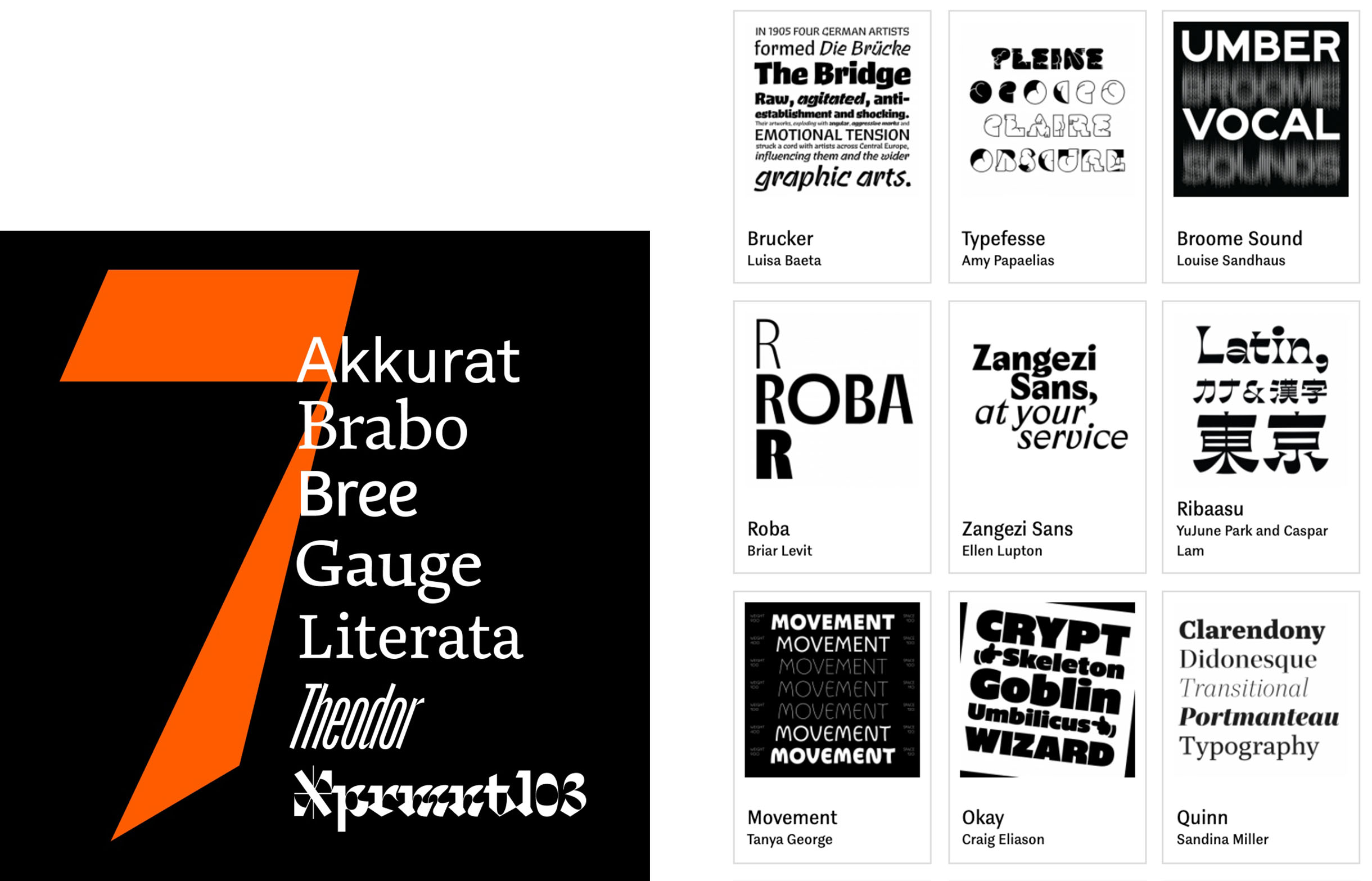 Don’t be surprised by the fact that they present the results of the year 2019 in the end of 2020: type industry is rather slow, and the best typefaces live for decades and often get popular only several years after they were released. Schrift magazine, aka Type Journal, has selected seven remarkable Cyrillic 2019 of 2018 — among them you see Gauge by Alexander Tarbeev, CSTM Xprmntl 03 (even if it was not finalised until 2020,) and Akkurat by Lineto studio whose Cyrillic version was consulted by Ilya Ruderman and Yury Ostromentsky.

Typographica.org published their traditional annual anthology of essays about the best releases of the year (in this case, 2019): inter alia, it features Nostra by Lucas Descroix (released on Tomorrow), Zangezi Sans by Daria Petrova, and multiple other typefaces which we spoke about in our digests 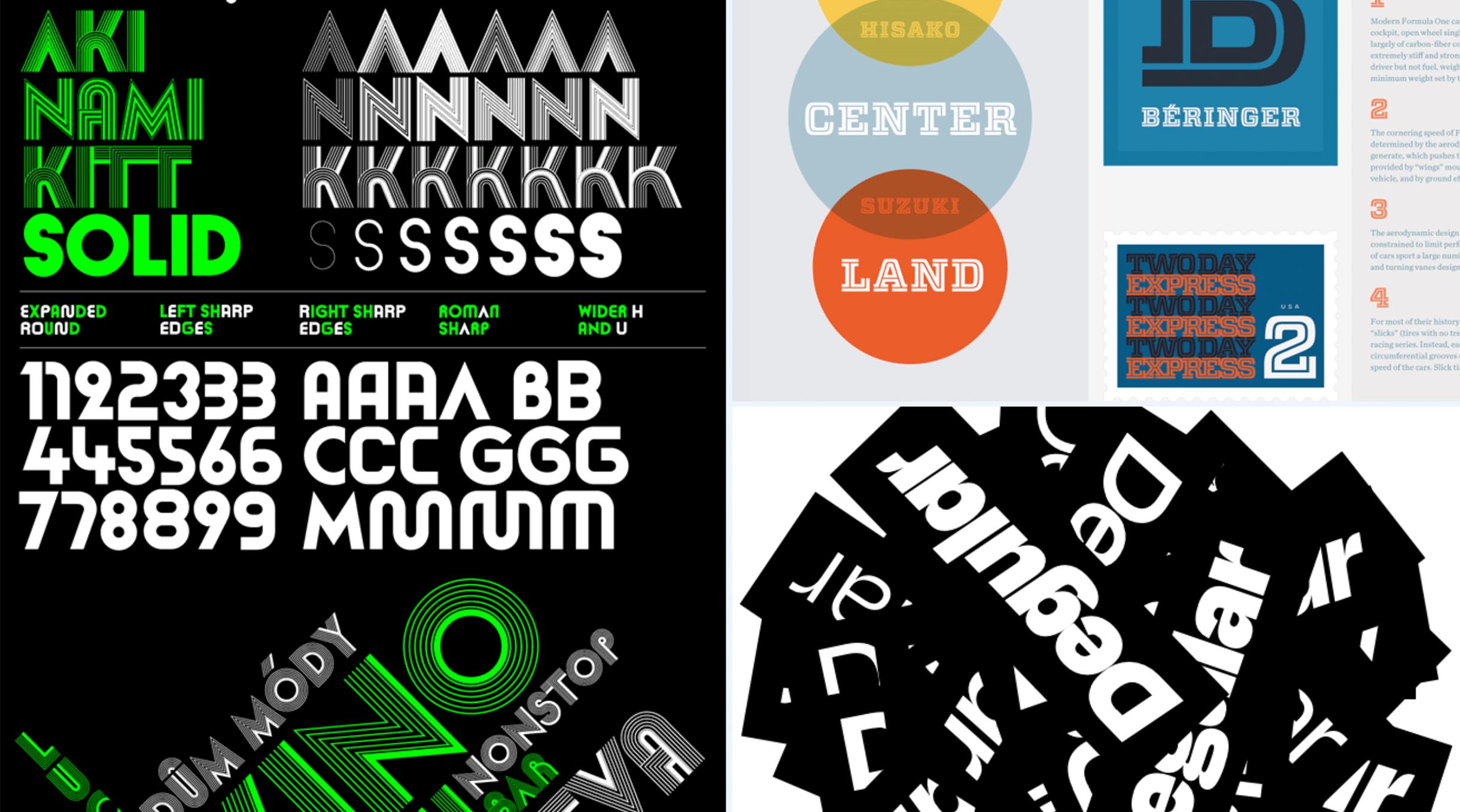 The US magazine Print, relaunched last year as an online media, presents the results of the year 2019.

Great list. Personally I relate to it because there’s plenty of experimental typefaces. Take a look, perhaps you might have missed something during the year. ;)

A bit unexpected, but I noticed a bunch of new stuff. The list might be useful in terms of mind-broadening for those who’re used to looking at wicked serifs, futuristic core, and variable experiments. I agree with the list when it comes to their sympathy for the Q Project. 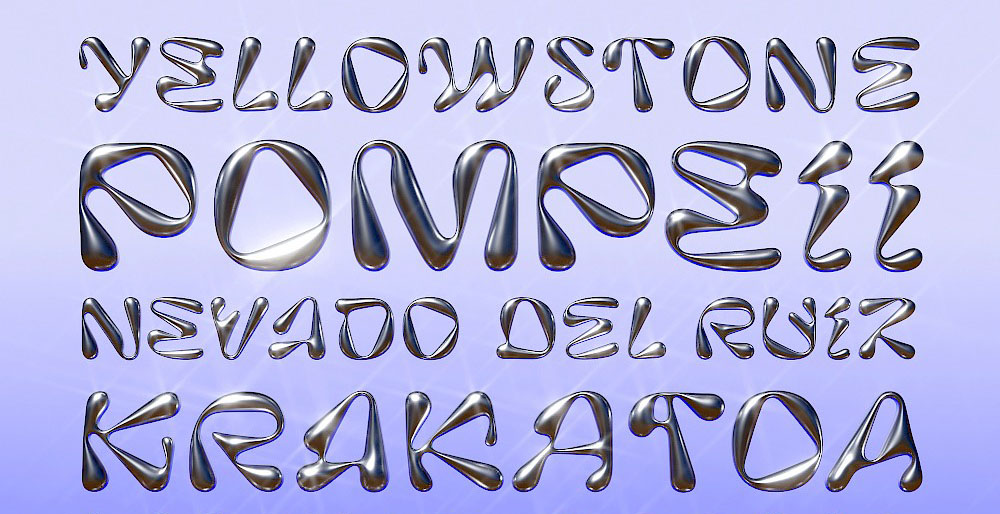 During its two-years life, the fluid, salient, almost ornamental typeface Pilowlawa became a cliché of super-display typography; now, to even more facilitate the job for the fans of #chrometype hashtag, designer Vincent Wagner created a 3-d model for each glyph. You can download the set of mashes under all main formats on Velvetine website for free. \

Madly beautiful, incredibly fashionable, plus Pilowlava is featured in the 2019 list of Typographica.org. All you gotta do is find the right occasion to use it. 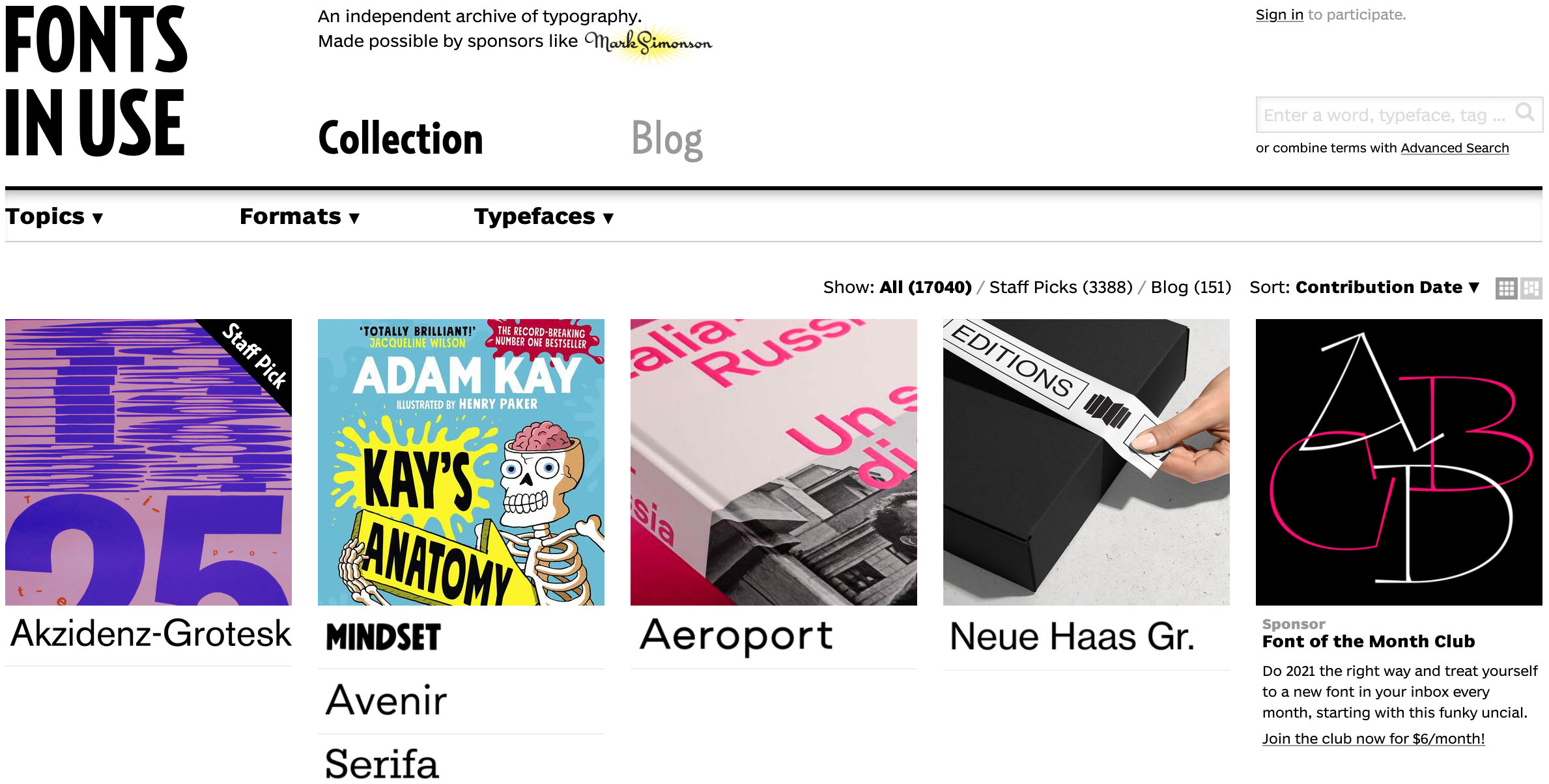 Fonts In Use turns 10

Fonts In Use website collects and catalogues the examples of fonts in use, from the ancient to the most contemporary ones, often combined with a detailed account on the typeface and the item where this typeface is used. In December the project turned ten years, and its founder told about the present and future state of the site and their plans. 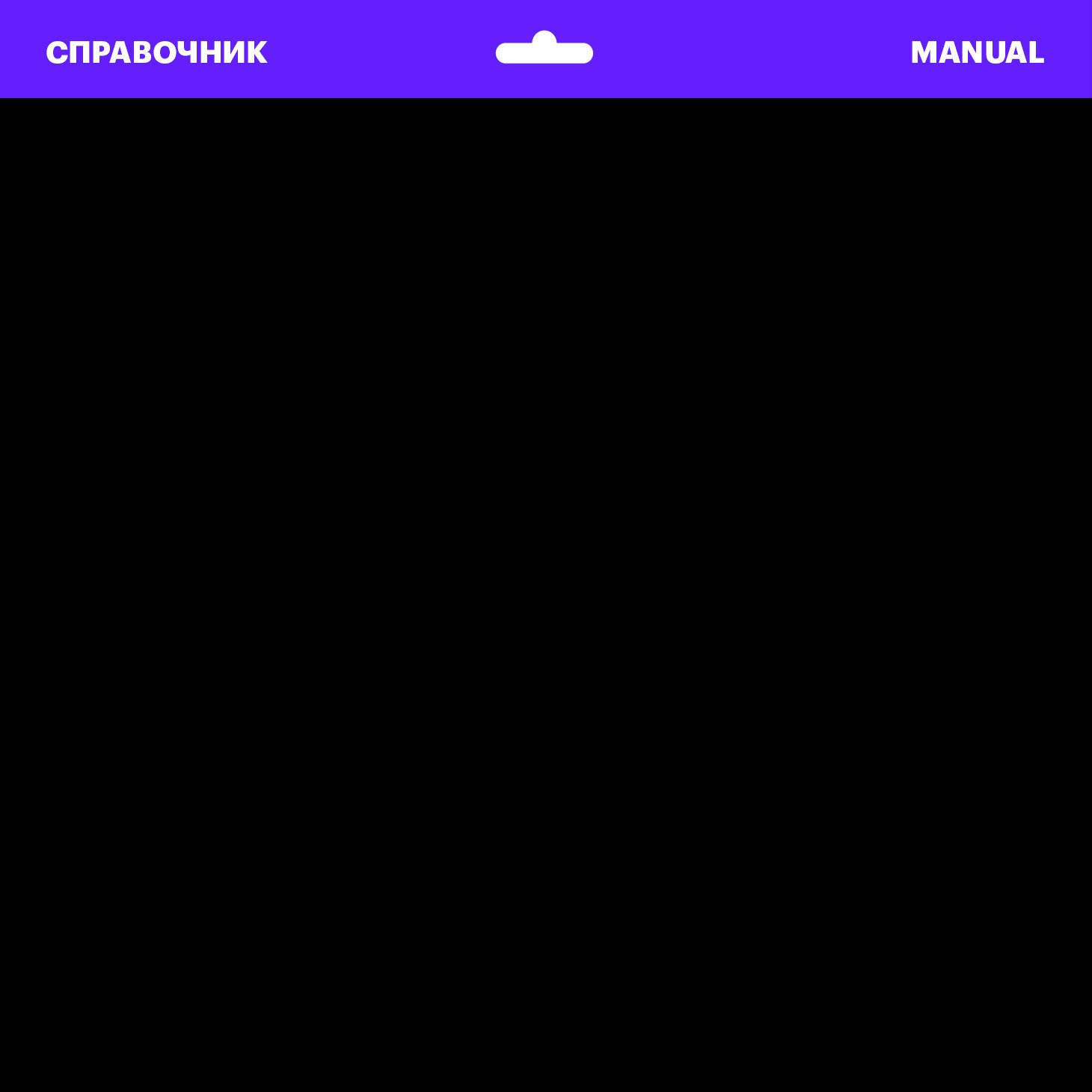 Spaces, a detailed manual from type.today

We continue to talk about the details in typography (the Russian typography in the first place, but not only): this time we shed light on word spacing, next to punctuation marks and in justified texts. When we brought everything together, we were surprised how many things can — and should — be told about emptiness. 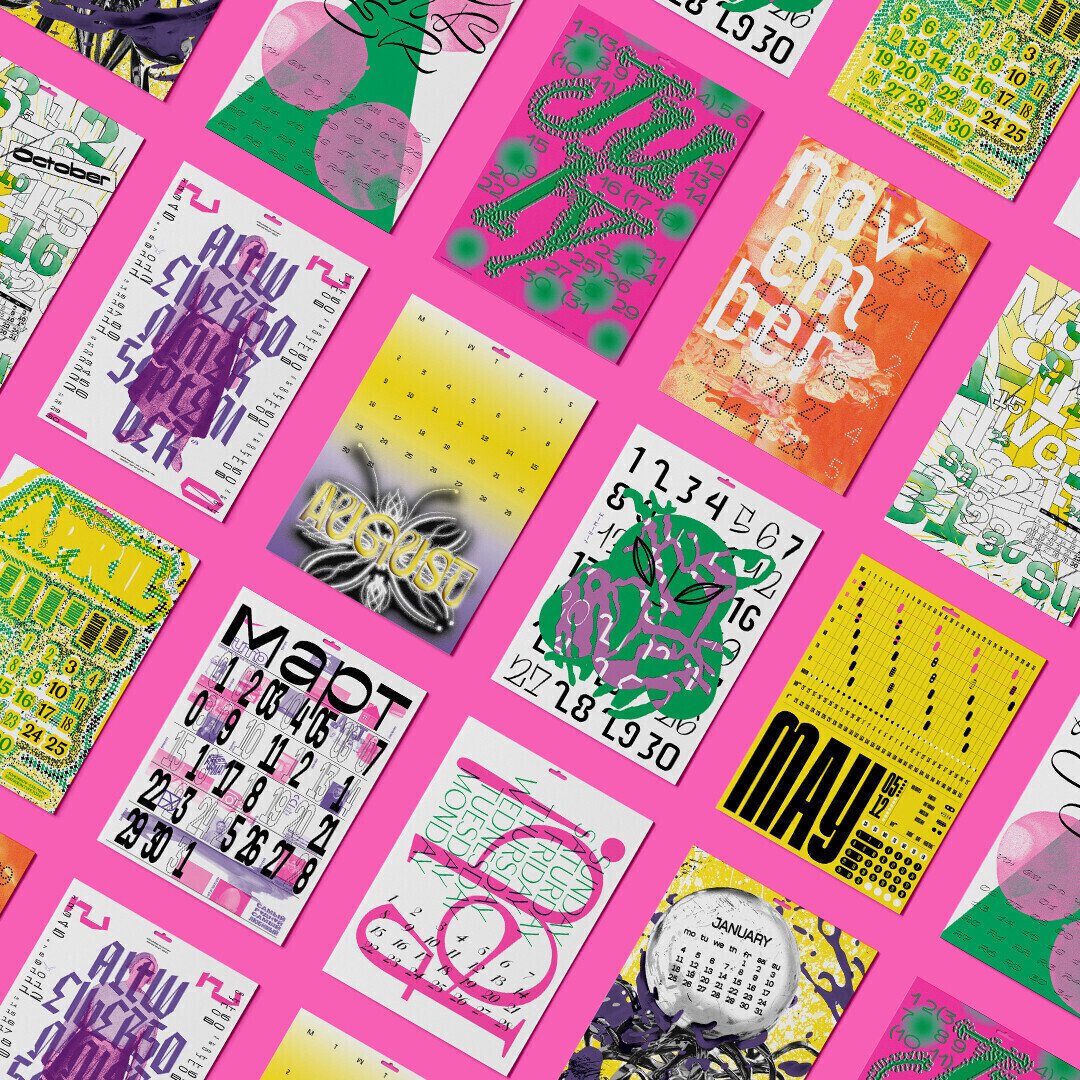 Esh Print printing shop decided to make a typographic 2021 calendar, inviting 12 different designers and taking typefaces from our Tomorrow library. The project resulted in the wild, various, and beautiful edition of 100 copies, get one directly from the manufacturer!

The perfect gift for a designer detected! 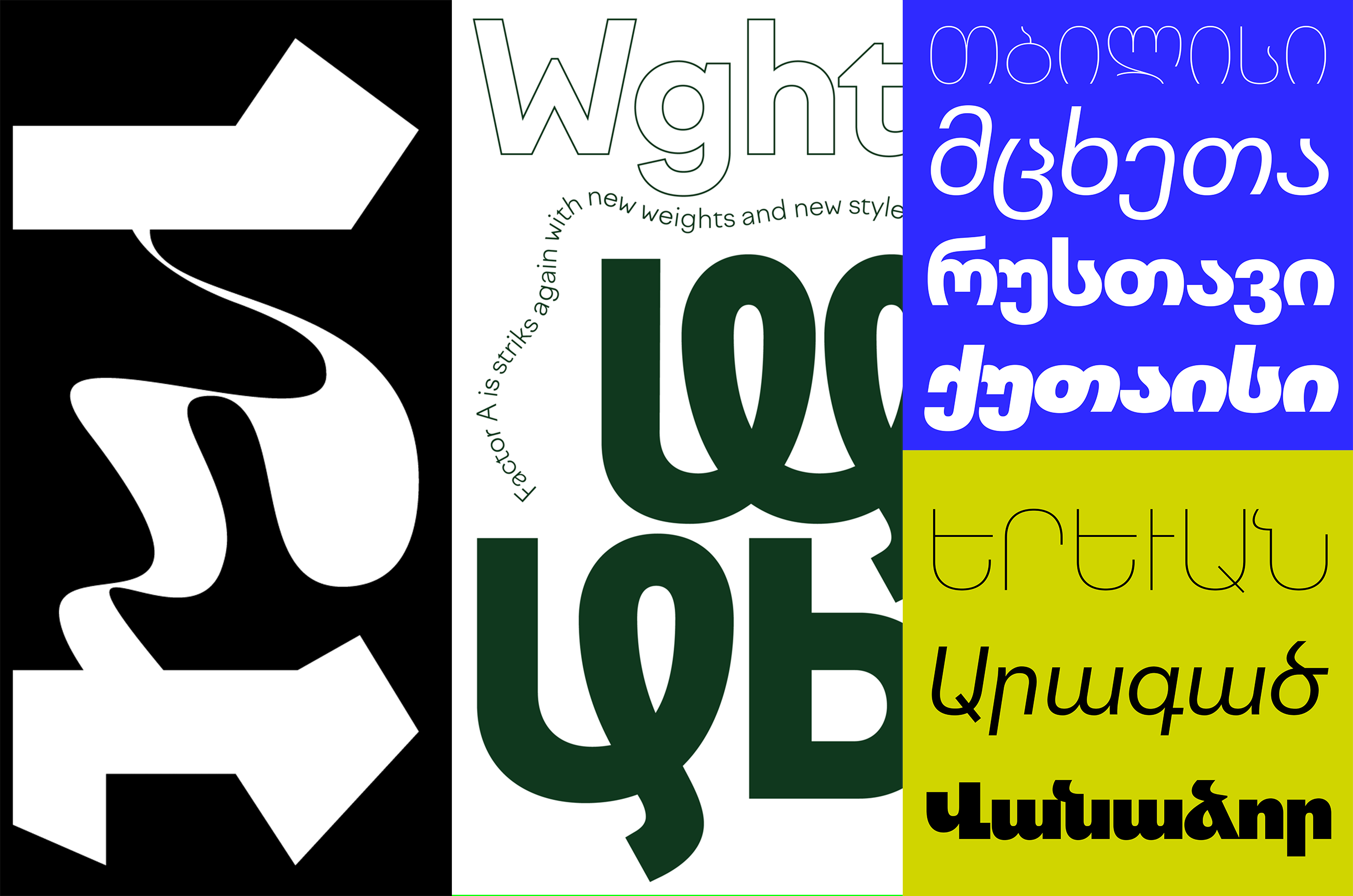 In December we released CSTM Xprmntl 03 — the last (at least for now) project in the series that turned out to be not that simple and quick as planned. Apart from that, Factor A was updated with more weights, while its existing styles were improved. Finally, we now have Armenian and Georgian Graphik — any further comment is unnecessary.

In December, the hostesses of our Insta from Holystick studio were giving away gifts: clothes, food, printed items (and even a nice human contact.)

Thank you, Mila, Yana, Yulya! See all the works by Holystick via #typetoday122020.

In January our Instagram account is managed by Facultative Works: every day they tell new and interesting things about biology, technology, and their synergy.