What type will be trending tomorrow? We asked Timur Zima

This June Timur Zima, the curator of @tomorrow.type.today Instagram, spoke at Typomania online conference, sharing his thoughts on the hottest trends in type. We are glad to present you a brief recap on that talk made by Timur himself

That was me who came up with names for these categories, and those are in no way common or accepted universally. All the phenomena described are very contemporary and very recent, and my goal was to define the most evident genera features.

The main feature of a wicked serif typeface are amplified serifs. Those are super hefty, always trying to go beyond the cap-height or pierce through the neighboring letter. Vast amount of black as a result of large ascenders/descenders and terminals, loops and tails. Clearly, many European designers are currently looking in this direction (check one of our recent releases, Apoc, — editor’s note).

This sort of typography is clearly inspired by the futuristic fantasies of designers, artists, and film directors. We can identify several apparent sources of inspiration for today’s designers:

A futuristic look is achieved through the industrial or digital forms, which are often mixed with graffiti aesthetic.

It is a rethinking of Medieval scripts: Textualis, Fraktur, Schwabacher, etc. Handling the blackletter is always a great challenge for type designers, as it suggests additional research, many hours of practice, and constantly checking with the fine ancient specimen. However, blackletter keeps attracting modern typographers, we see more and more new works and bold solutions arriving.

Tokusatsu is a term for the sort of live action film or TV drama genre that was born in Japan in the 1960s, literally meaning ‘visual effects’. Those are stories about superheroes. In Japan and South Korea, tokusatsu movies have had a great impact on popular culture (not only visual culture).

Playing cards and costume designs of Kamen Rider, a renowned Tokusatsu franchise. This is what it looks like during the last two decades — the visual style of the series has been evolving since 1971

I believe that the term tokusatsu lettering is very relevant for modern typography, with its vast amount of visual effects when it comes to dimension, texture, colored lighting.

One of the most prominent tokusatsu lettering authors is Yuta Kavaguchi, better known as Guccimaze. He is a graphic designer who started as a graffiti artist — that’s where he learned this freedom and fearlessness in terms of form-making. Yuta’s works are marked with a profusion of visual effects: chrome surfaces, acid palettes, bright lighting, sharp letterforms — seems like he takes from Photoshop everything he can.

It is a case of an author who doesn’t seek legibility but rather performs profound research on shapes, balance of black and white. He is primarily concerned with form and aesthetic of the typeface. It is a territory of experiments, where the author almost doesn’t comply with the basic rules of typeface design (or even doesn’t respect those rules at all). Are such typefaces well-readable? They are clearly not. Are they beautiful? They definitely are.

In the age of printed type it was a necessary engineering solution; today it is purely a visual detail. 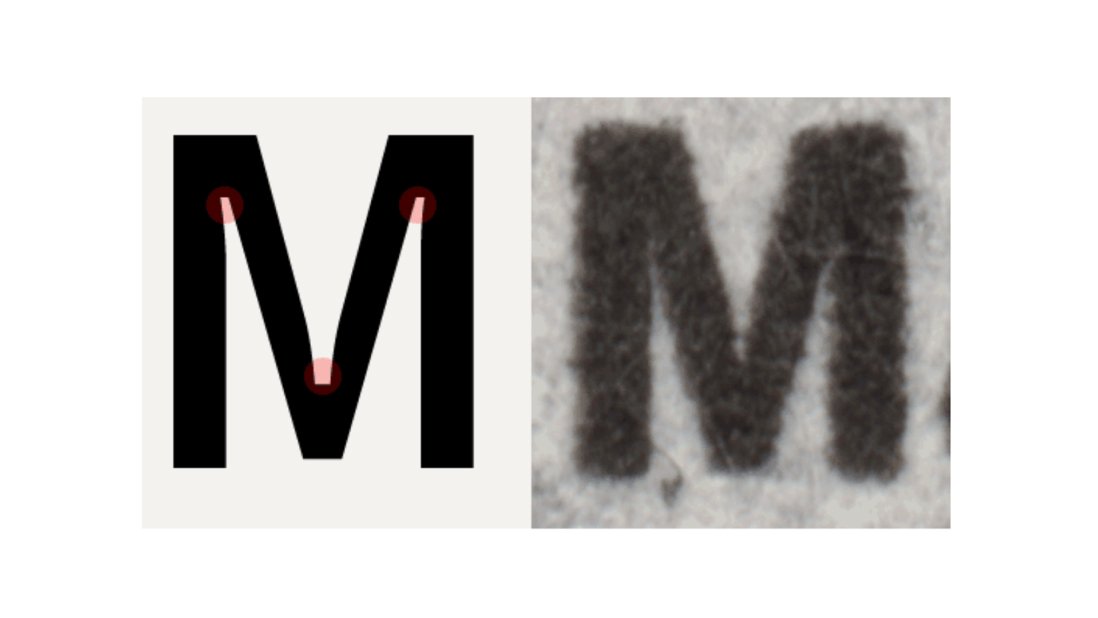 This is a long-standing trend in type design that continues to develop in 2020 as well. Inktraps are brazenly cutting the letter in two, becoming increasingly more and more perceptible and turning into a distinctive specific detail of the neo-industrial style. Sometimes, inktraps not only cut a letterforms inside but also grow pseudopods which are striving to get out.

There can’t be no tomorrow without neural networks and virtual/augmented reality. Not so many designers are using those technologies today, but I’m certain there will be much more of them very soon.

The easiest way to put a typeface into AR is using the Weird Type app by Zack Lieberman (available on App Store).

Antonio D’Elisiis linked a variable font with a smartphone gyroscope: weight and width are changing depending on the physical position of your gadget.

Daniel Vensel works with letterforms using generative design — that is, trying to teach a neural network to draw letters. Not very usable (or at least not yet), but the process itself is fascinating.

Plus, Daniel created an instrument that offers a more meaningful output: a Metafont-driven generator produces new letters based on the pre-drawn elements by complimenting them with random stuff. A new and extraordinary personality of the final typeface is obtained through this

It seems important to mention that any of these listed trends are just the tip of the type iceberg and that there are plenty of other interesting things going on in there right now.

Follow our Instagram, click the mentions and check out your recommendations, shape your own picture of what’s happening — it’s quite possible that yours will be even more exciting.

Translated to English by: Dina Mingalieva
Words and cover image by: Timur Zima