Type as business: why are fonts priced differently?

Why might one font by the same designer be priced 2 or 3 times higher than another? How is a price for a font style calculated? Why are some fonts so expensive?

Why might one font by the same designer be priced 2 or 3 times higher than another? How is a price for a font style calculated? Why are some fonts so expensive?

Everything’s more or less the same as in a supermarket. Let’s say you go down the soft drink aisle. One bottle there costs 50 rubles, another — 60, and a third — 70. Why is that? Well one drink brand positions itself as being a luxury product, another — as a top-seller, the third soft drink is sold in glass bottles, not plastic ones. Font-pricing reflects the same principle.

One foundry might want their font to be on the maximum number of computers, so the price is not $50 — the market average, but $10. Others might say: we don’t need our font on every computer — we’d prefer that it was used only the most influential, self-confident art directors — people who understand why the’re spending not 50 dollars, but 100 euros per style. There’s a solid argument for both of these approaches, and they each have their pluses and minuses.

The final price of the font depends on the conditions of its use — if printing is the aim, our $50 minimum license gives permission to install the font on no more than three computers. If the purchaser’s goal is web use , then the site should be visited by no more than 15,000 people a month. If the site has millions of visitors, the price can skyrocket up to several thousand dollars per type style.

Another important aspect of pricing is the number of languages. Yura and I made the cyrillics for Stratos. Before Cyrillic and Greek were added, Stratos cost about €30. Now it’s already €60. It often happens that somebody’s business expands — but the font that they have utilised until then does not exist in the required additional language/s. This is a dilemma: either change the font to one which has both say, Latin and Arabic, or start negotiations with the author, so that Arabic glyph set is added.

Not so long ago, Fontstand — a monthly font rental service — was launched. The system is as follows: you pay one tenth of the font cost per month, and if you do this 12 times, you receive a full license — it becomes yours. This font rental model is also suitable for fast projects, and for checking files to see how everything works together. An hour of free use is offered, for example. 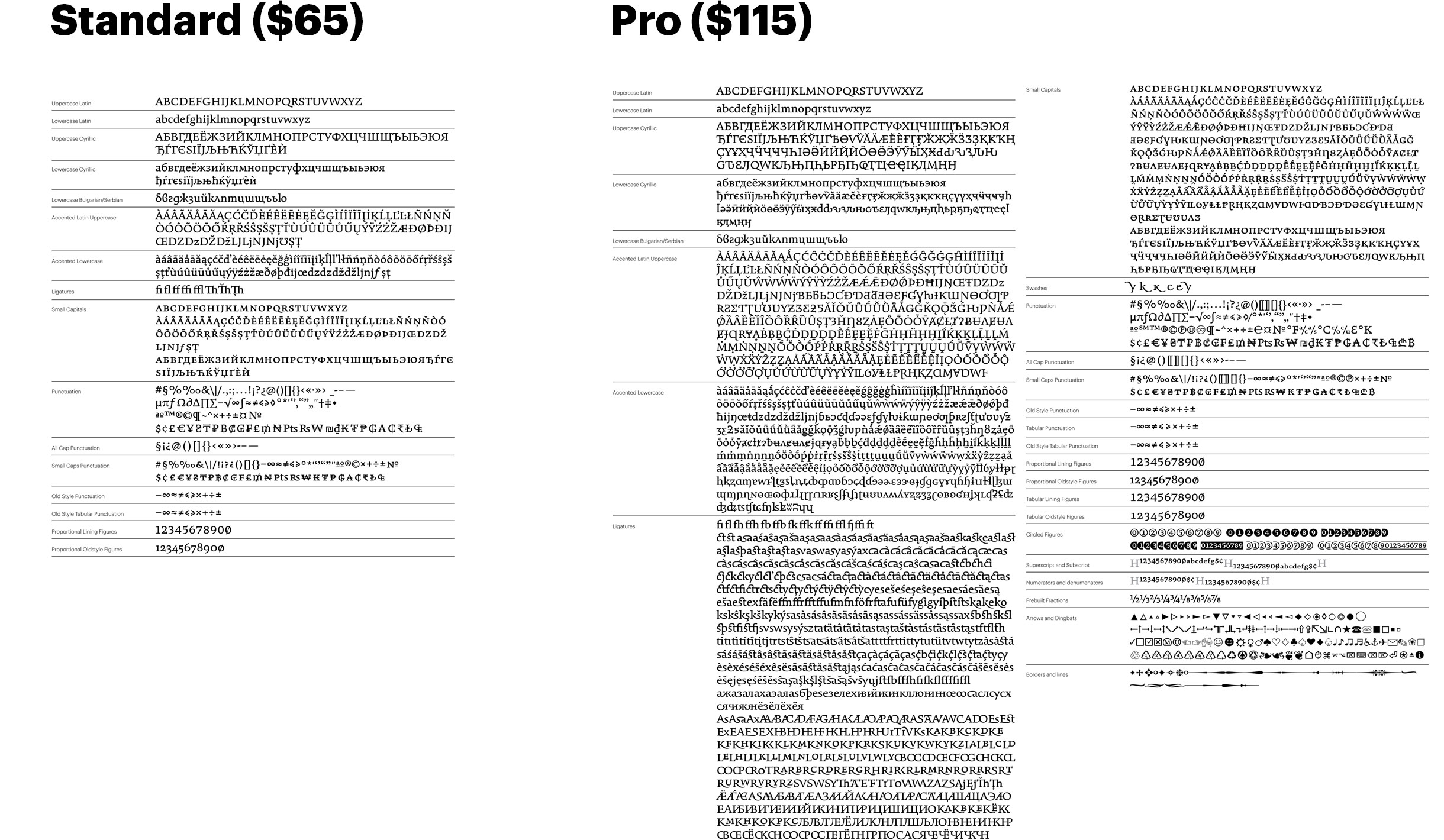 Fonts are priced differently because different people make them in different places and conditions. Someone paying a high rent, and high salaries for their employees would have higher costs for a font, than someone else. But most important is the foundry’s positioning. Some foundries compete with pricing and discounts, while others position themselves at the higher end, and their fonts costs more.

At Typotheque, we offer very complete font families, and our smallest character set contains over 1000 glyphs, with nine numeral styles, and extensive language support. Additionally, we support many other writing systems, from Armenian or Arabic, Indian scripts, and we’re even working on far-Asian scripts, or Canadian syllabics. We believe that the research behind our work presents significant value to our clients.

As I mentioned, we have standardised family pricing, and standardised pricing for single fonts. The final price depends on how many styles a font family includes.

There are a lot of writing systems in India — and some of them are supported in Typotheque fonts. For example, the sibling typefaces October and November have Devanagari and Tamil glyph sets

It doesn’t matter if it is a font, shoes, or food products — the sale price is always connected with the production price. It, in turn, is associated with the number of characters included in a typeface — in one there might be 256, in another — 750.

30-40% of the cost is related to the work of a type designer. Another 30–40% of the production price is related to the amount of fine-tuning the font requires — for example, whether manual or auto-hinting is used. 10-15% relates to testing, auditing and so on. So this is what the the production price is made up of. The final cost of the font for the purchaser stems from this. Or, for example, from the fact that creating sans serif fonts is slightly less expensive than serif fonts, and brush pen is less expensive than sans serifs, and so on.

Each author names the price that they consider necessary and which is comfortable for them. We can’t always analyze why Vasya sells something for 2 rubles, and Petya sells something for 10. Vasya decided on one thing, and Petya on another. Maybe Petya estimates his work as being worth more than Vasya’s. Or perhaps Vasya decided that selling a lot of inexpensive licenses is more profitable than several expensive ones.

We have the same prices for all font styles, but some fonts — for example, an uppercase-only display font — might be cheaper. This is just because of the smaller character set, and not because they are worse. 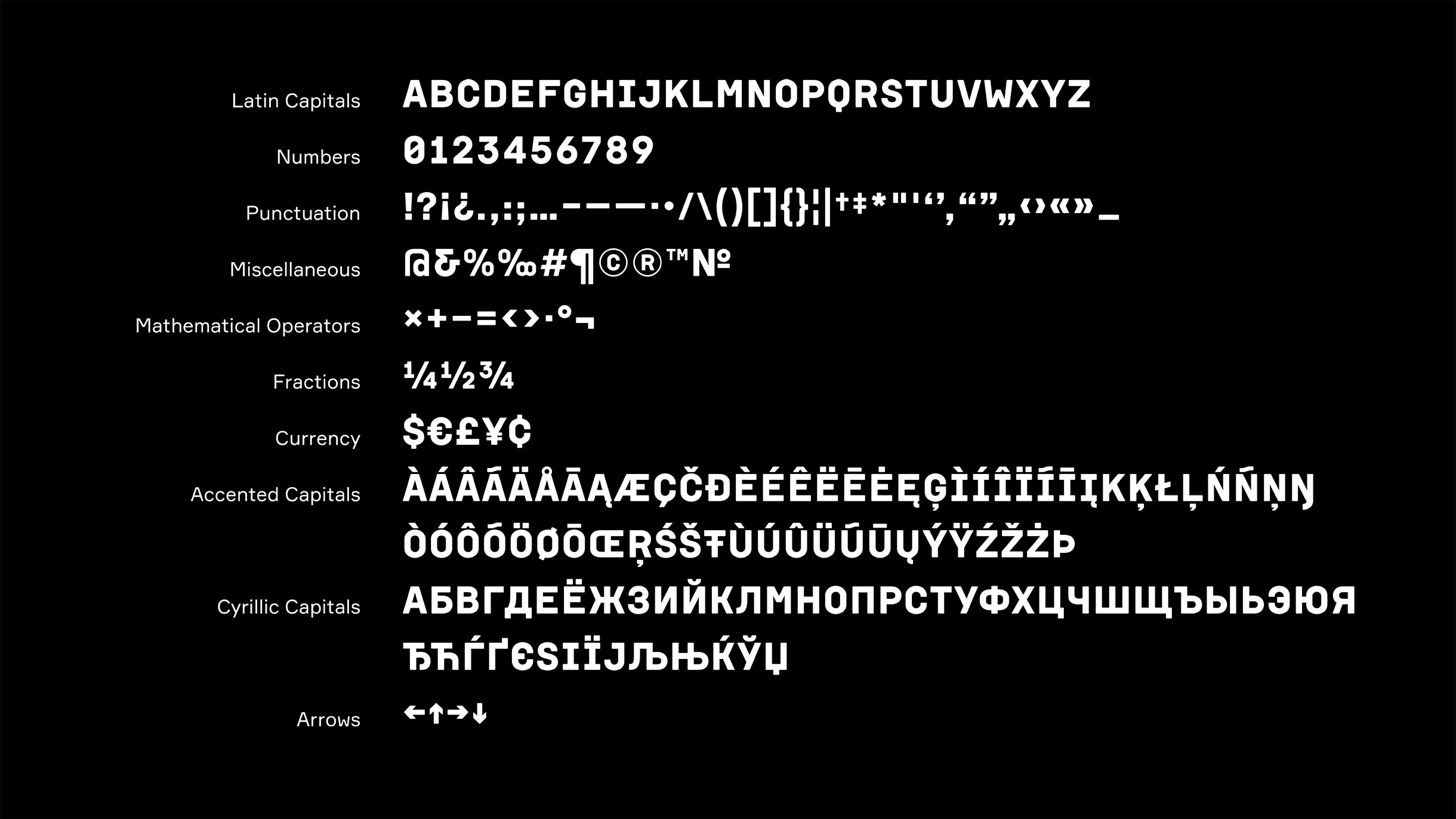 Institut, a caps-only display font with a modest glyph set, is available for $20 — two times cheaper than most fonts by Brownfox

Commercial Type fonts start at $50 for a basic license for a single style in one format (desktop or web), with a Latin character set. Commercial Classics fonts start at $60 — since we donate a portion of these licenses to the St Bride Foundation, we wanted a slightly larger base for the donations to come from. From here, anything ’extra’ costs a bit more — additional formats, additional styles, additional language support — with discounts automatically factored in. A basic license for the Graphik collection seems fairly expensive at $1500, but with 162 fonts included this works out at just $9.26 per style.

A lot of this was following our gut instincts — what sounded fair, and what sounded plausible for someone to pay. In effect, larger corporate licenses subsidize individual graphic designers licensing fonts. Paying rent, salaries, and expenses on $50 font licenses is not easy! 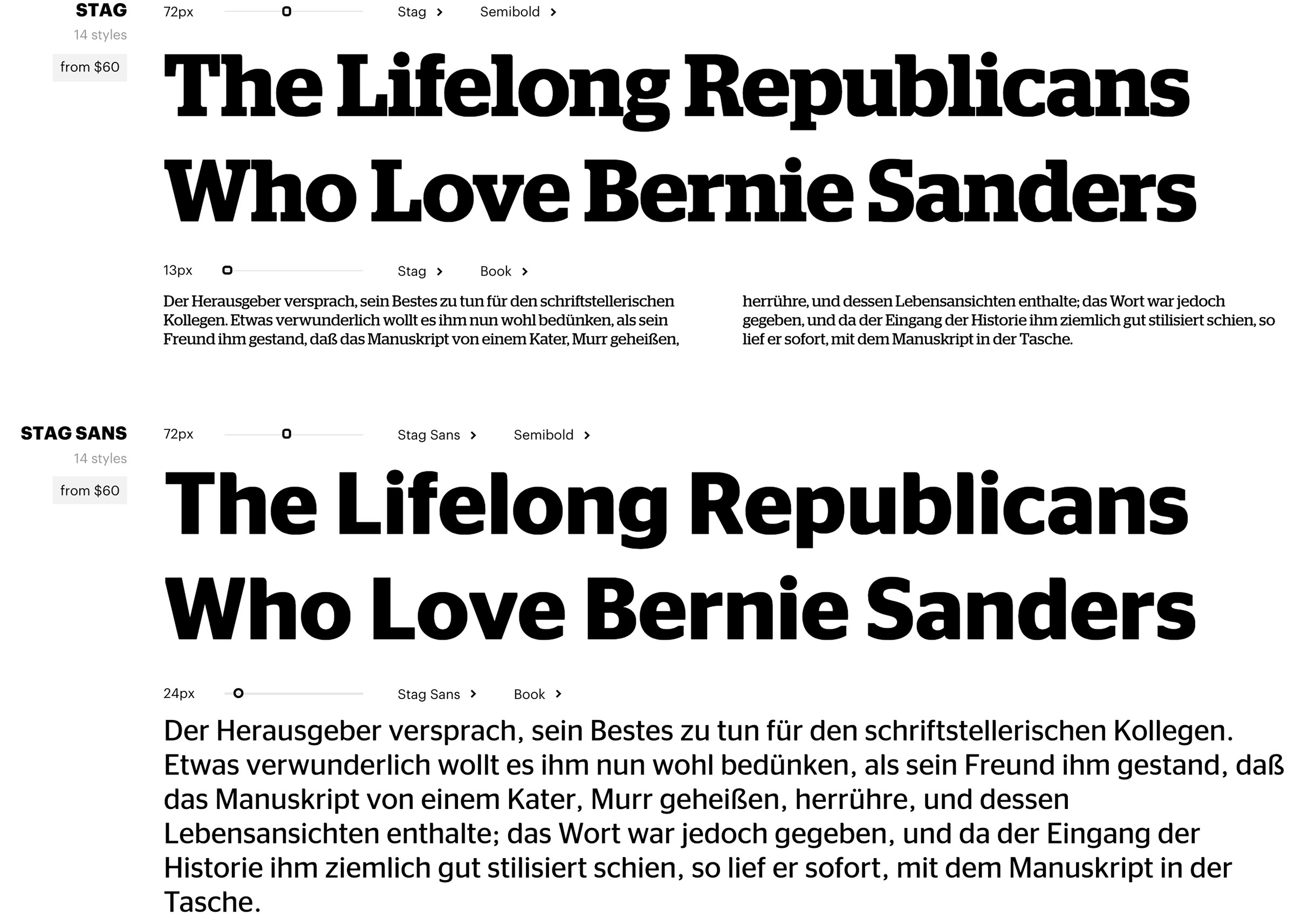 Stag, a sans+serif superfamily designed by Christian Schwartz (Cyrillic by Ilya Ruderman) is available on type.today

See also:
How much does it cost to make a font?
What is the difference between free and paid fonts?
Type as business: why are font licenses so varied?