Free Flight, a catalogue for the eponymous exhibition at Tretyakov Gallery (Moscow, Russia) has been awarded by The Society of Typographic Arts. The book, designed by Konstantin Eremenko, employs several styles of the Gauge Type Family. We asked Konstantin about his criteria for choosing a typeface and the importance of Alexander Tarbeev’s workshop.

Free Flight, a catalogue for the eponymous exhibition at Tretyakov Gallery (Moscow, Russia) has been awarded by The Society of Typographic Arts. The book, designed by Konstantin Eremenko, employs several styles of the Gauge Type Family. We asked Konstantin about his criteria for choosing a typeface, how his impression of Gauge changed over the years, and the importance of Alexander Tarbeev’s workshop.

The question of choosing fonts

My diploma project in Basel was based on a list of aspects upon which the spatio-temporal structure of a book is built. It included a section about fonts. But I came to the conclusion that I wasn’t going to cover the question of choosing a font. I didn’t want to approach this issue from a formal point of view, i.e: “we use this and this, but this is something we should never use.”

There are functional limitations that determine the choice of font. Suppose we have a multilingual text and need a Cyrillic alphabet or a bunch of diacritics. Or we need to set the text in a small size. And then there is the matter of aesthetics, which can be a wildly complicated thing! How do I rate a particular font in terms of aesthetics? Sure, I can subjectively determine parameters like the beauty of characters and the beauty of typesetting. Yet often these are completely different things. There are beautiful letters that — in my eyes — can’t be combined together to form an attractive single text. They just remain a set of beautiful letters. Plus there is another problem: I often come across a few imperfect letters that let the rest down. There may be literally three “troublesome” characters in a glyph set, but my eye just gets stuck on them, and that’s it. In the Cyrillic alphabet, these are most often the ascender of a lowercase б, or lowercase д — which seems disproportionate to me. We can certainly highlight some important aspects to consider when choosing a font, but creating a one-size-fits-all, universal algorithm along the lines of “do it this way and everything will be fine” seems impossible to me.

In fact, I don’t use that many fonts for my work. A couple of years ago I counted them, and it turned out to be about fifteen to seventeen — not a lot. I often use similar fonts, which seem comparable in nature to me. For example, Univers, Atlas Grotesk, Graphik are all part of one story. I use a lot of Typotheque fonts. I have accumulated a lot of them over the years — I’ve enthusiastically bought all of the Fedra font family. Plus, we must keep in mind that you get used to working with certain fonts and understand what to expect from them. This is very important in terms of layout. Since I create everything myself, it’s very important for me to know how it all works when tracking. With one font “+10” is normal, whereas another might space out terribly. Nevertheless, I still buy some new fonts every year.

I don’t tie my font choices to the theme of a project, I’m not trying to make parallels between the typeface and a historical era. For me, contemporary design or contemporary typography are not reduced to using a new typeface. That’s why I sometimes use some old type. I’m more keen on playing with structure and space: rhythm, cropping and margins. In the history of design, there have been precedents of people choosing fonts in spite of the times they were in, resulting in contemporary, relevant design pieces. Why did Wolfgang Weingart use Akzidenz-Grotesk in the 1970s, moreover, pairing it with Univers? It seems like a peculiar decision to today’s eyes, doesn’t it? But it was because he needed to be different from the design generation of 1950s and 60s. He simply had no other option but to revert to Akzidenz-Grotesk. Another example is the early 1990s trend for using Helvetica mechanically widened or narrowed. It then became super-relevant, despite being a typeface from another era. 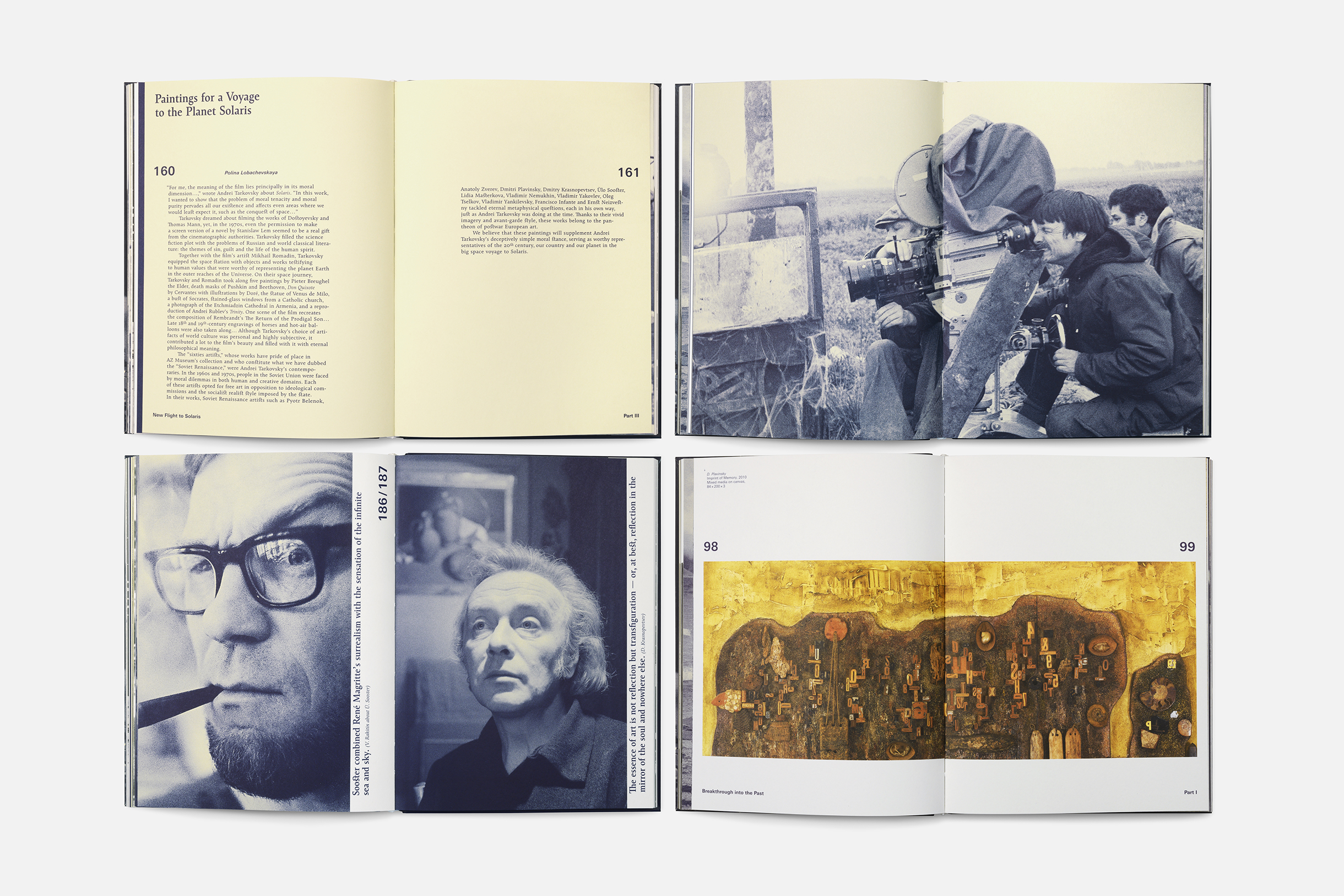 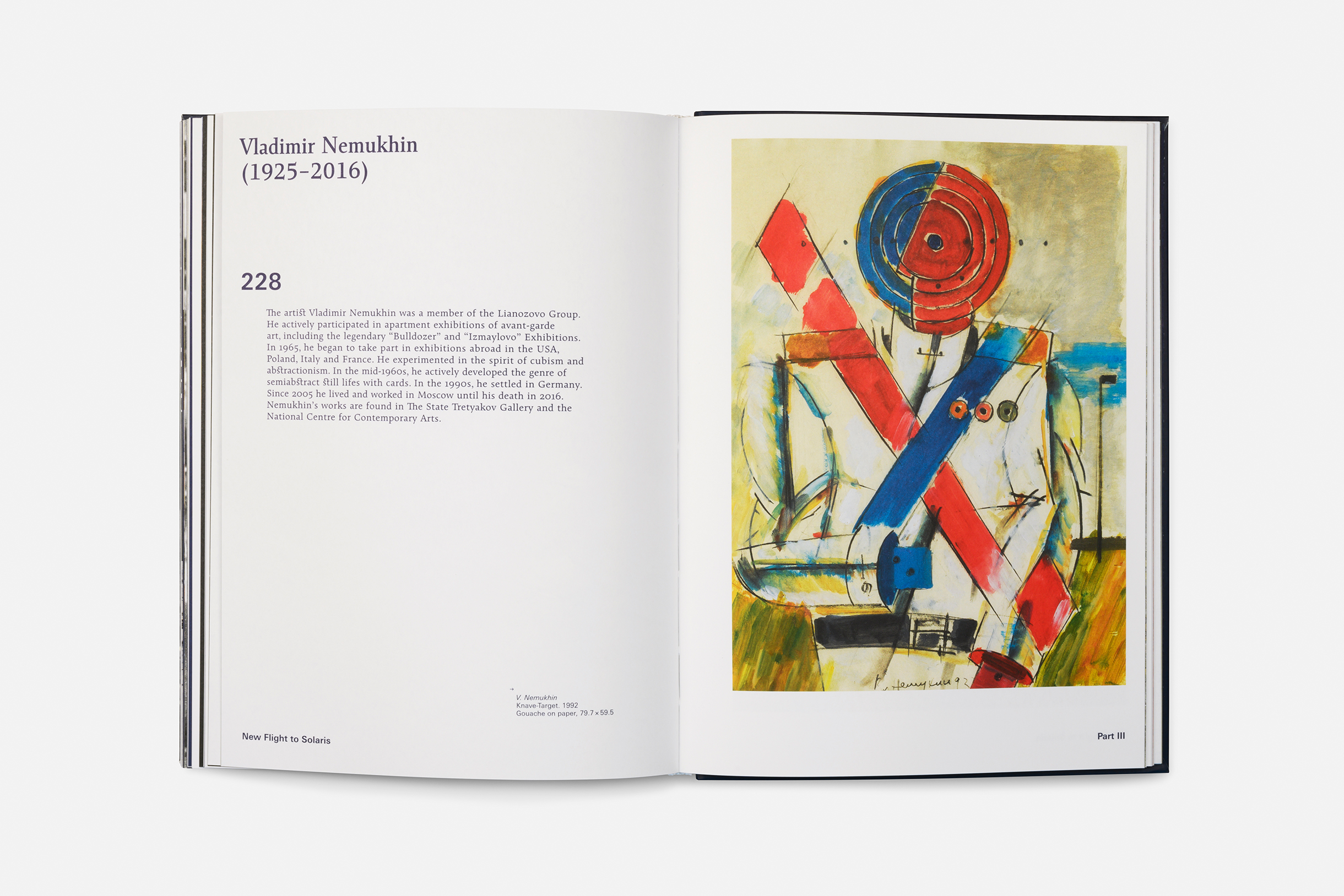 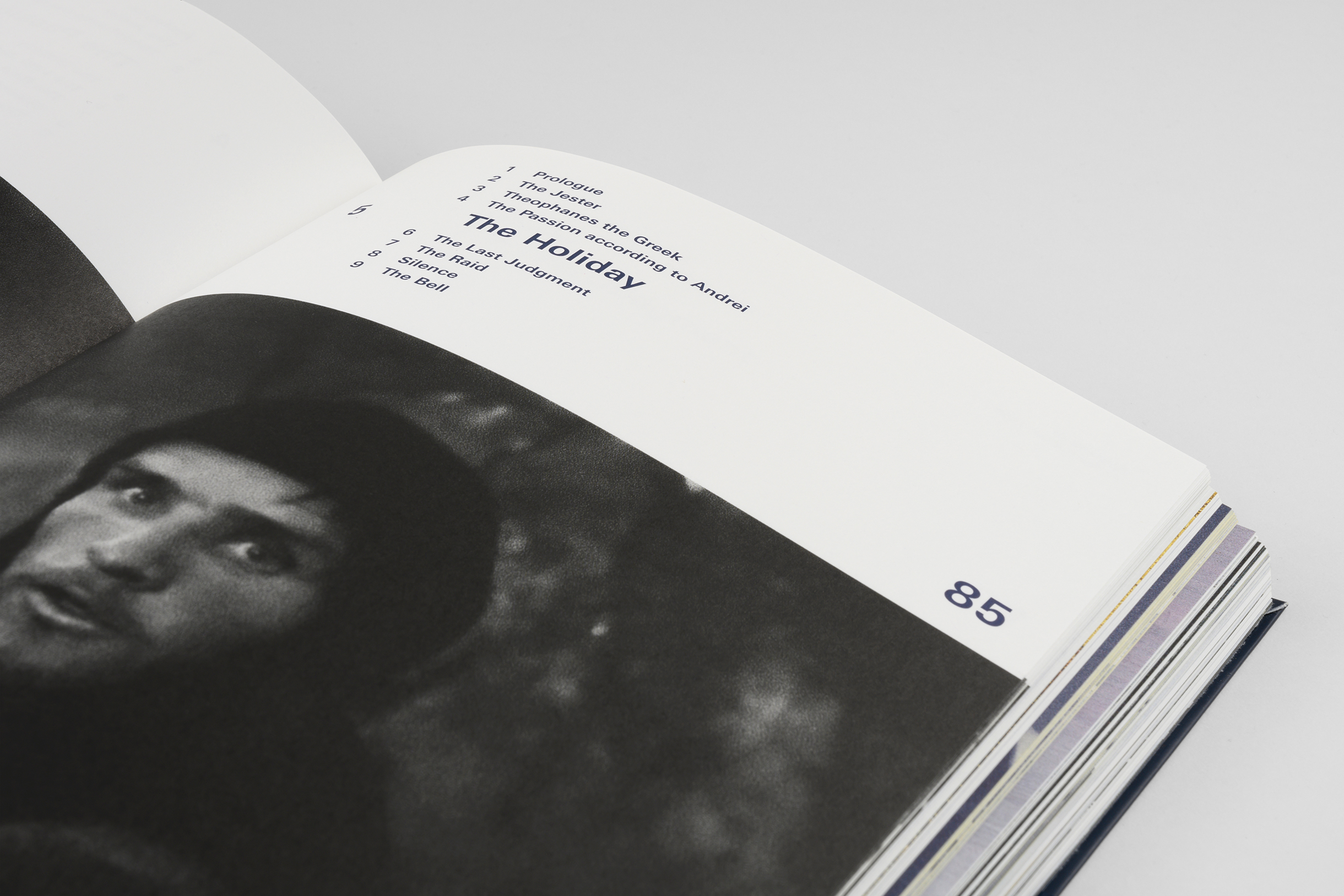 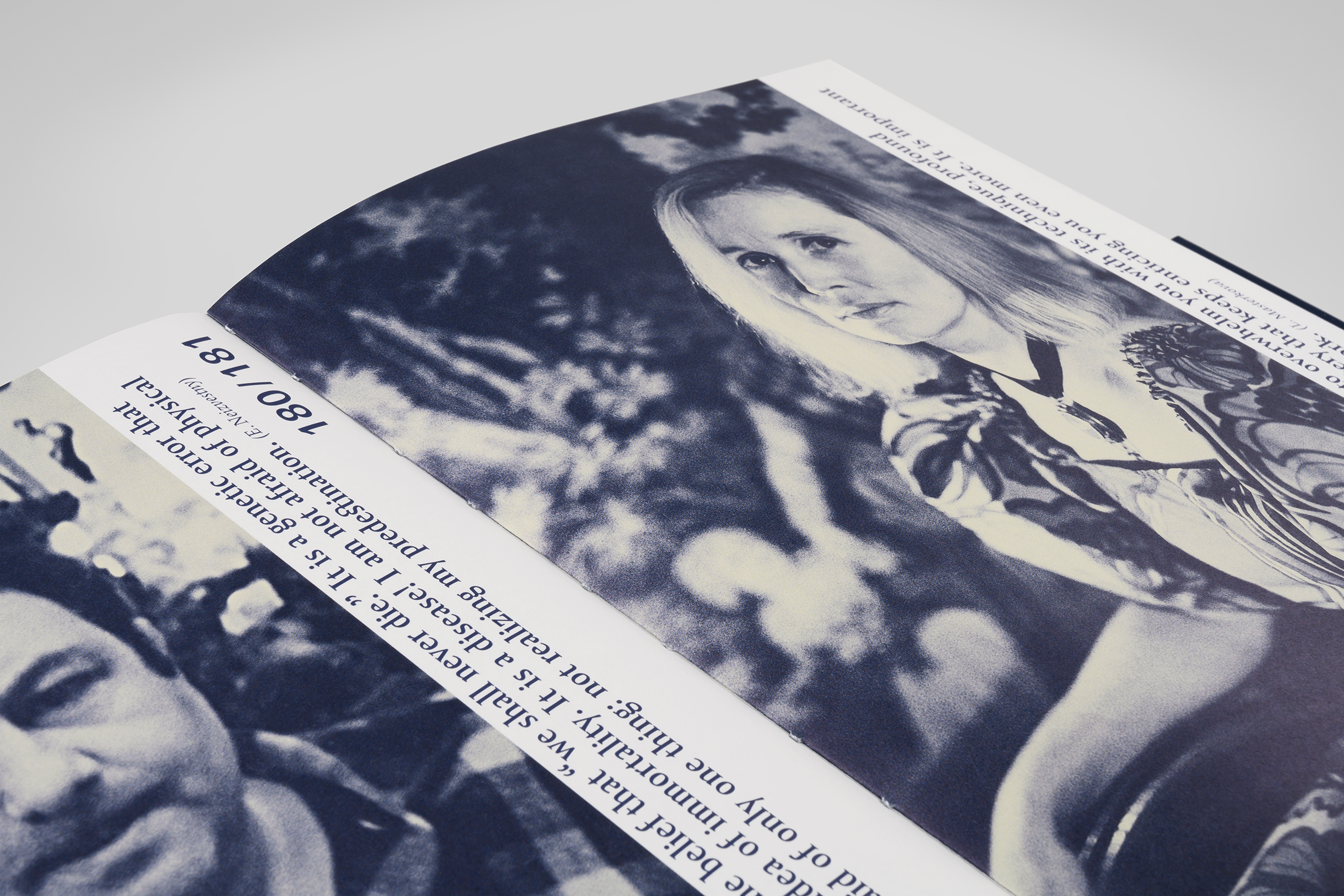 I’m very glad that Gauge has been released. This is not a new font for me. I encountered it ten years ago, so I already understood how to work with it. It was used by Afisha Magazine. It was on all of Tarbeev’s computers. Plus, I made catalogs using this typeface for Type Workshop. And over these ten years, my attitude towards it has not changed, which is great. I bought it for a particular project, although I was not 100% sure that I would use it, but I had to try. It’s very important to choose a tool that suits the task that you are currently solving. 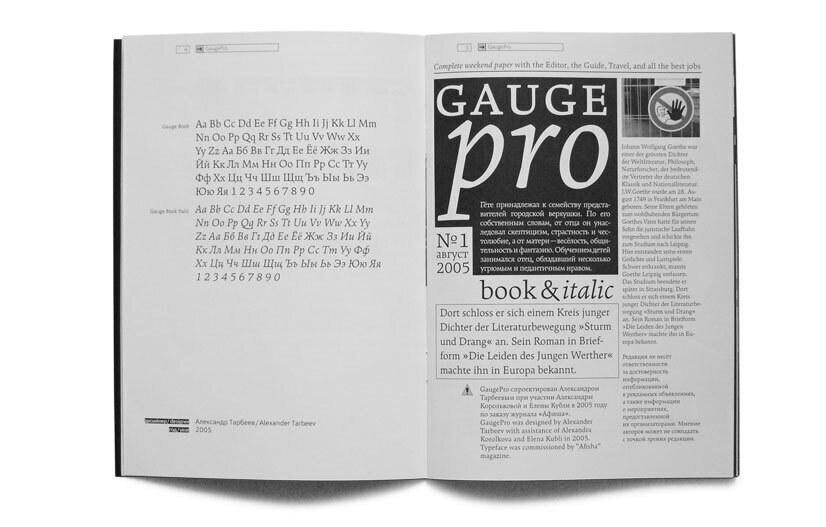 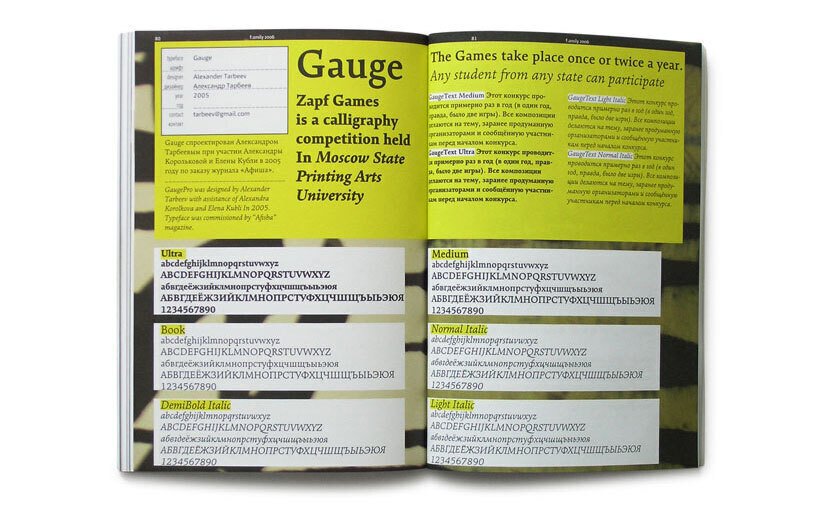 First of all, I would say that Gauge is sharp. If we talk about a font pairing, then Univers is absolutely neutral. And this neutrality gives a certain scale — when used for small captions this scale is offset, and it works very well. Gauge has some special details. For example, the bowl in the lowercase letter a. I do not like the word “wrong,” especially when people try to use it in a positive way. Therefore, I will say that this bowl is very correct, it gives emphasis, it adds sharpness, but only a little more sharpness than usual.

Secondly, Gauge needs space. When justifying, it definitely needs to be given a decent line length — wider than usual. I can’t say that I’m a fan of such wide proportions in text fonts. It’s not very convenient. But the project presented a special challenge: I didn’t have much text to work with, yet I had to somehow fill the whole spread and make sure that the text flowed on to the next page. And here, it was just this excess width — and the fact that it was not necessary to excessively increase the point size — that solved the problem. By the way, it’s great that Gauge has Caption styles. This time I did not use them, because I was pairing it with Univers. But I’m very interested in trying this mix of styles — for example, with a sans.

Of course, Gauge seems very Dutch. It perhaps reflects the mood fifteen years ago, when there was a very powerful Dutch influence on font design. But Tarbeev has unique intuition. There is just the right amount of influence discernible here. I still really like his BigCity (the serif typeface for Bolshoi Gorod magazine, designed by Alexander Tarbeev in 2006 — Editor’s note). If an opportunity arises, I will be the first to buy it. But Gauge is a little sharper, a little more on the edge. To be clear, Tarbeev has never created anything that makes you ask “Is it ineptitude or an idea?” When we look at this bowl in the a in Gauge we only wonder: is the author showing off or is it this accent that makes the font a little different compared to the rest? He always has this balance: on the one hand, we see manufacturing precision, and on the other — the aesthetics of the letterforms. And Tarbeev still passes on this sense of balance to his students. For this reason I was convinced I needed to buy and use Gauge. This was only my first project with Gauge, there will definitely be more to come. 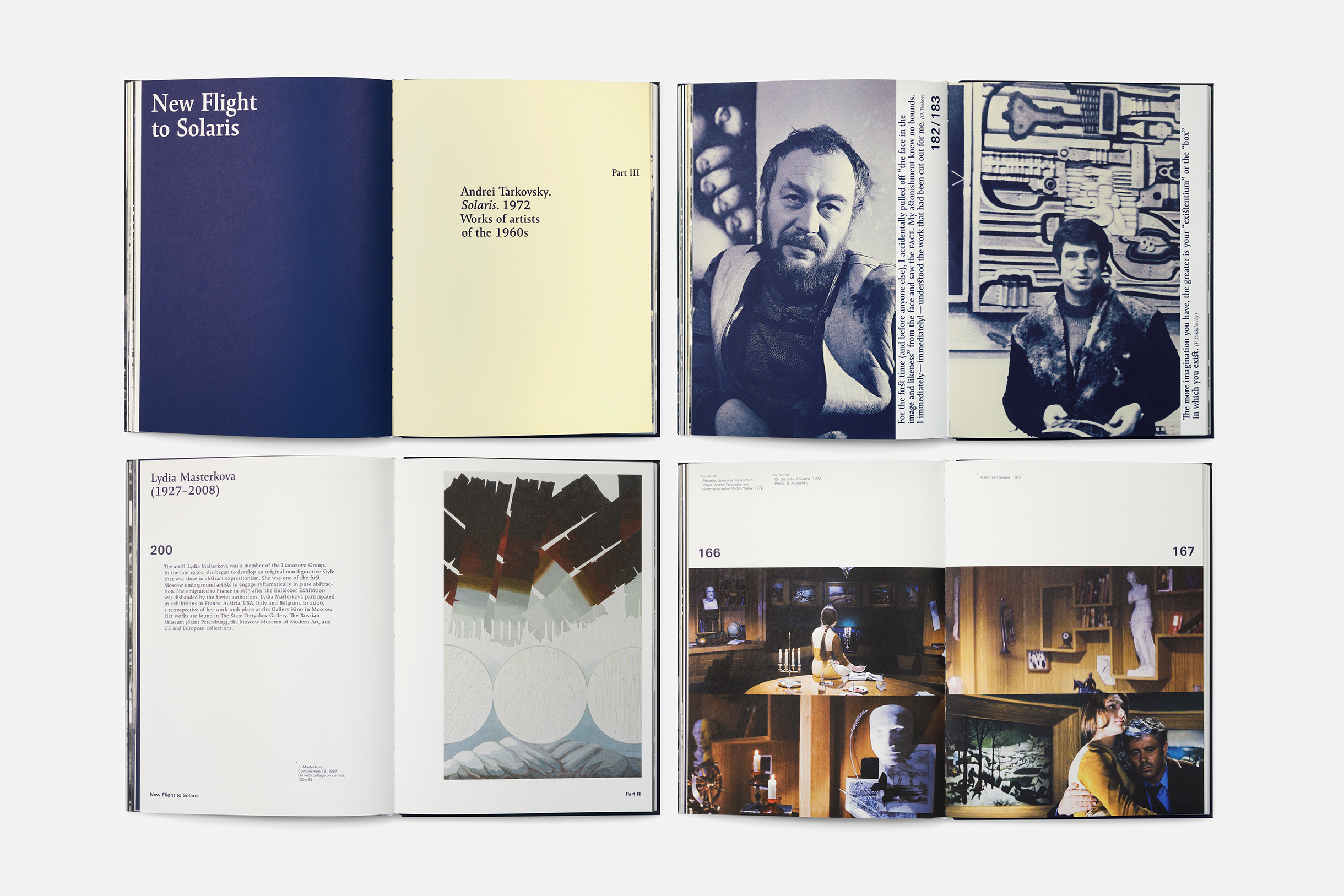 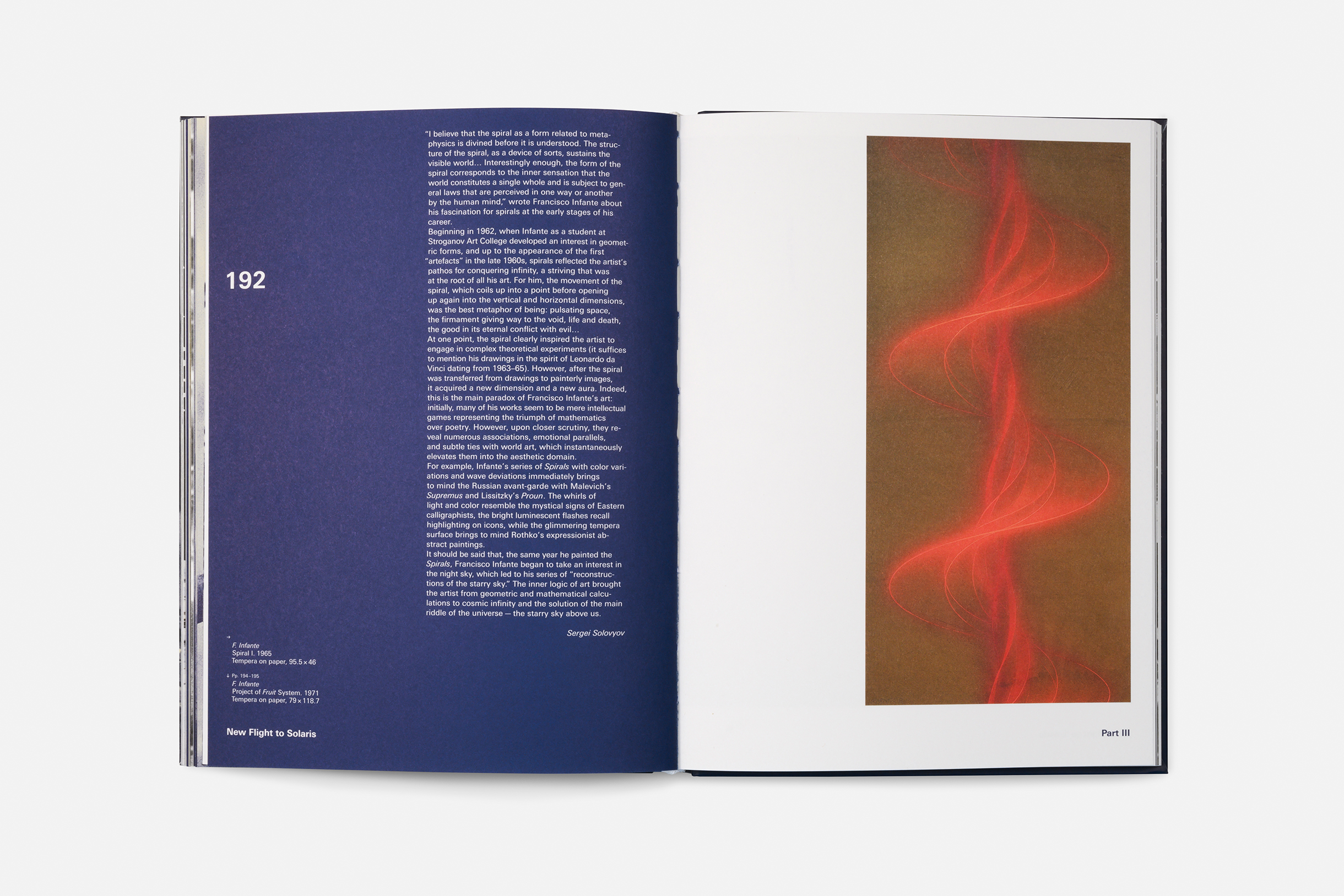 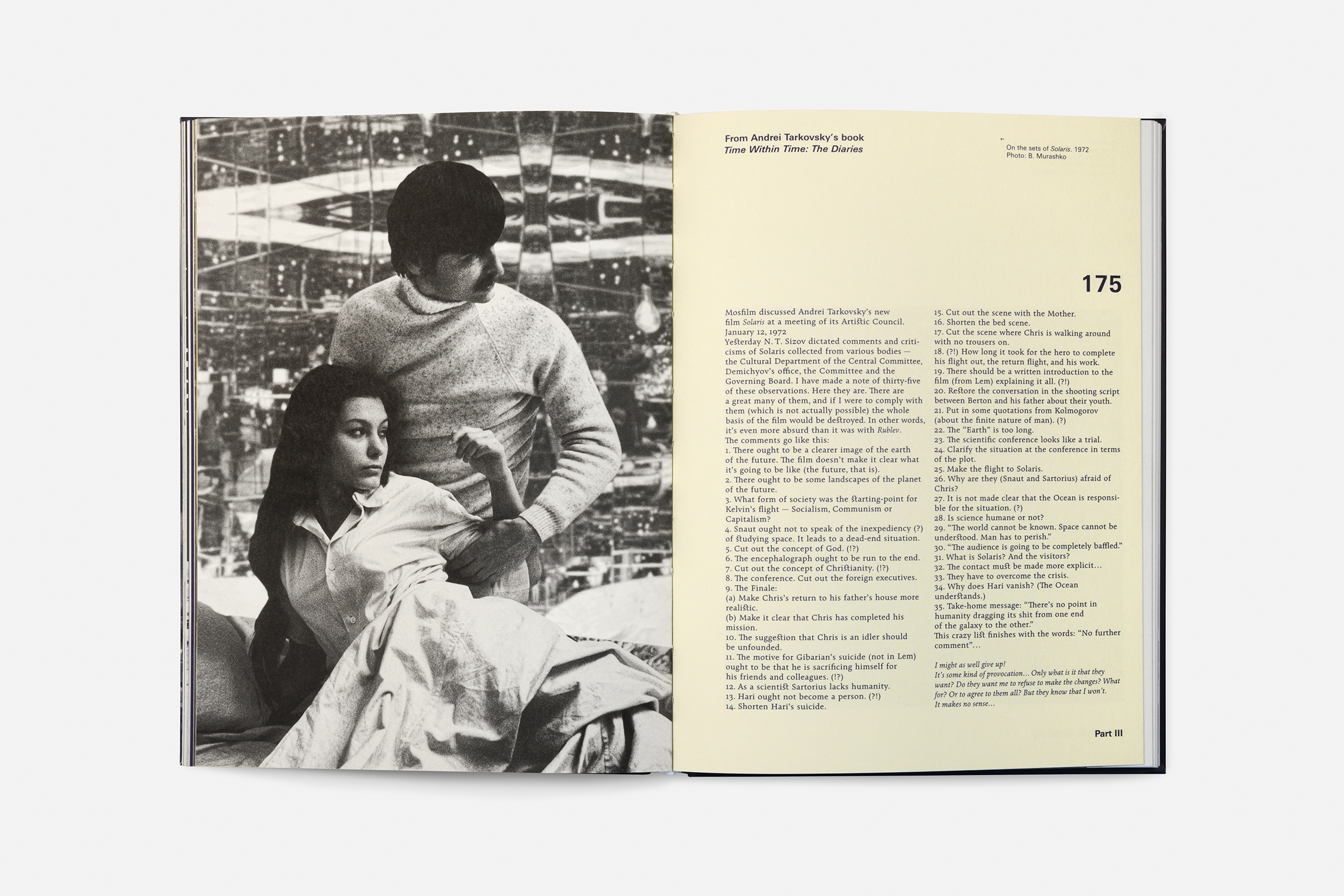 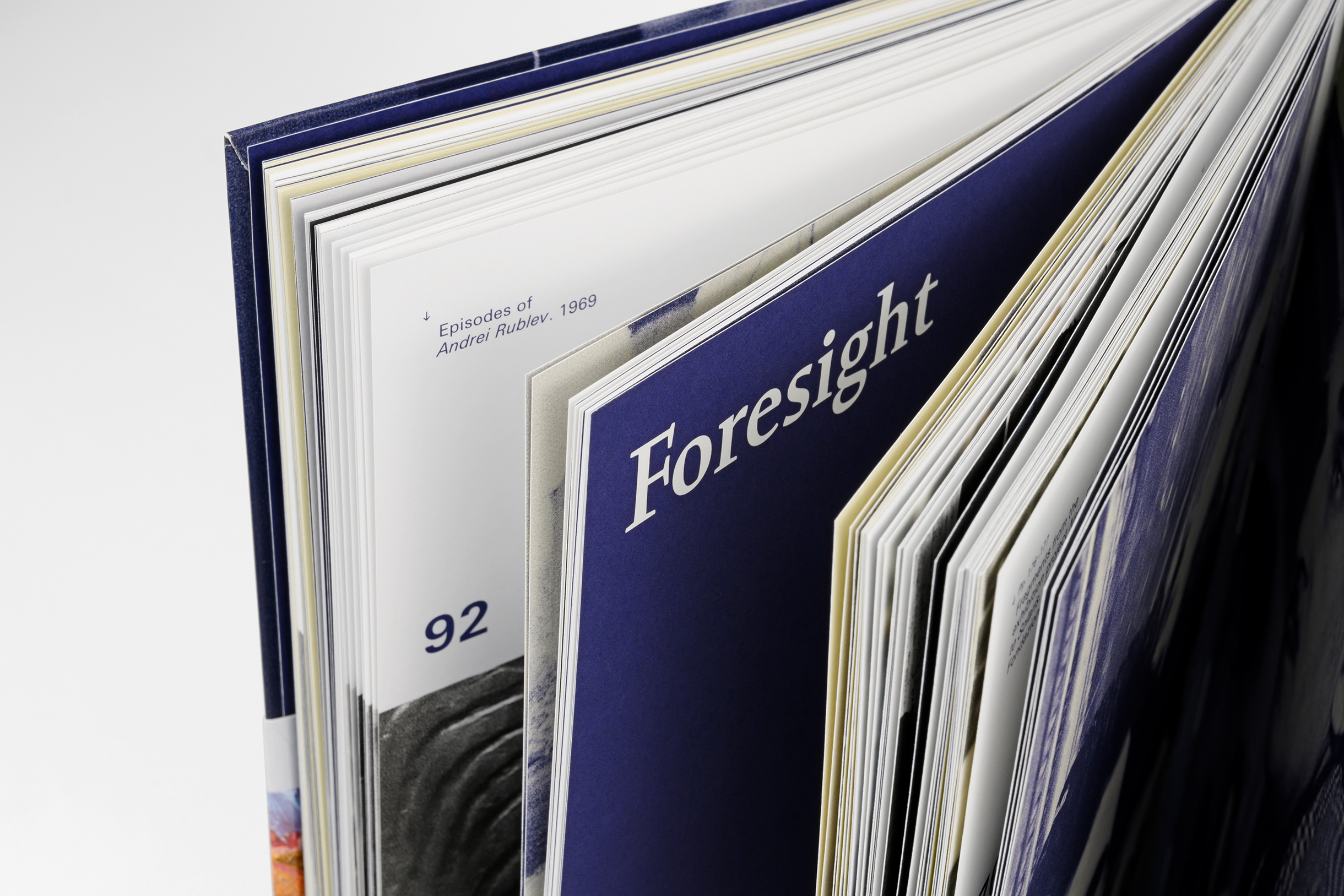 I can’t say I’m a typical representative of Type Workshop, because I’m not a font designer. I realized this quite early on, when I was studying there, and this is to its merit. You go there, try out some things, and come to the conclusion that you like this whole scene with letters. But this scene with letters doesn’t always mean font design — in my case, it’s more about typography. About fifteen years ago, there was a serious swing towards type design, when a large community of people who were engaged in creating fonts appeared in Moscow — considerably more than those involved in typography. I believe that the Workshop is an important school, and it has taught me how to approach the various texts that I work with, plus the technical and aesthetic specifics of designing characters.

But I never made a single font, although there were some attempts. Letters are absolutely not my thing, and it was important to understand this at an early stage, to accept it, and move on. In short: I’m just not cut out that way. I’m not prepared to sit and labour over one project for years on end. For me, the implementation of a project is important. Sure, I can make a book for six months, or even longer. But I have other concurrent projects that run alongside that one.

The Workshop’s key achievement is that the standard demonstrated by its students has been increasing from year to year. I went back for a visit about five years after I’d graduated, and realized that we’d been just children back then. In comparison it seemed we’d been doing only semi-serious projects. And now when I look at what they’re doing it’s unbelievable — it’s on a completely different level. So what will it be like in five year’s time? It won’t even be just a new generation that’s there. In these five years, they’ll have gained so much more knowledge, experience and so on, that they’ll be much freer and competent in the profession than those who came before. And this is the merit of the Workshop, which continues to reach new heights.

When we studied at Type Workshop, it was in its early days. It began with a simple room in the Moscow State University of Printing Arts, in which photographic plates were stored — they had been moved there and put together. Somehow, Tarbeev managed to get three tables and two eMacs in there. It seems to me that no one really knew about this room. We just hung out there. There were keys to this room available, so we came to the institute, opened up the room, took off our jackets and scarfs there. For those who smoked, there were ashtrays inside too. And we were not only engaged in all matters font-related, we also worked on various things there, because there were computers available and not everybody had laptops at that time. And there wasn’t even any Internet in that room! It was a place where people gathered and discussed a range of things. And all this lasted until 9 or 10 pm, sometimes security came to kick us out. It was really cool to have a little space where something was happening. And a lot of things did happen. For example: someone had travelled somewhere, and told us something about it, someone had done something and showed everyone their photographs. In this way, some experience was gained. We tried to organize conferences: we had to advertise them, invite guests and speakers, put up posters, distribute information and meet our guests. We even released some catalogs. It was really like a student movement. Now it might seem naive, but it all conveyed a positive message. It’s great that all this existed. Sure, there was no money at all. No one even thought about money — yet somehow we got things done, went out on a limb, put our heads together and got things printed. I have fond memories of those times. There was constant movement, no stagnation, and the feeling that you did not know what to do, what to occupy yourself with never arose. For those keen on a challenge, there was always an atmosphere of inventiveness to be tapped into. 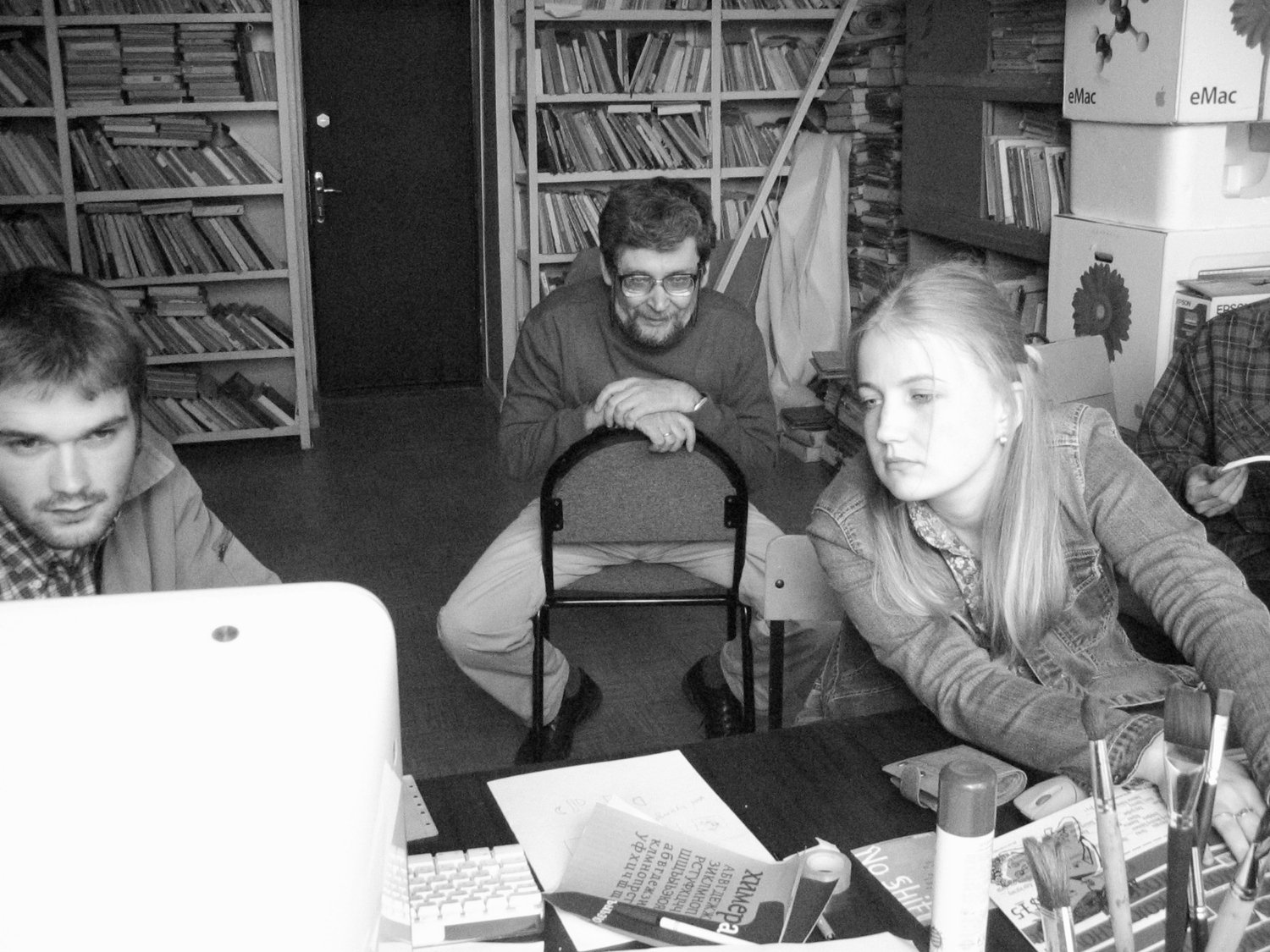 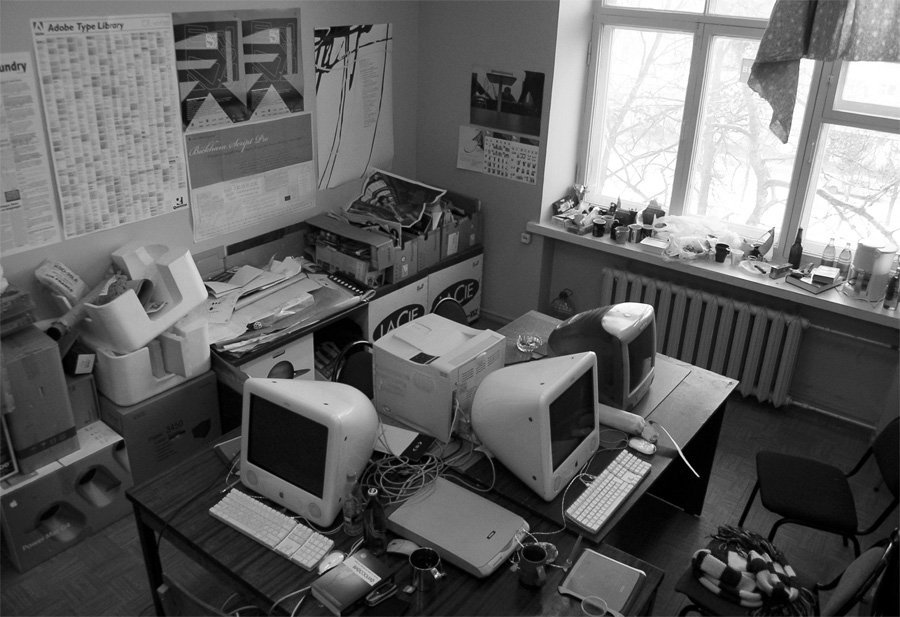