A lettering for Harley Quinn, a ’hyperlegible’ font, the German blackletter banned in Nazi Germany, and a dozen more curiosities in our February digest

A lettering for Harley Quinn, a ’hyperlegible’ font, the German blackletter banned in Nazi Germany, and a dozen more curiosities in our February digest.

New Kansas, a hot take on a 70s classic

Newlyn (who are responsible for logos of Honda, Unilever, PwC, Tate Modern) designed a font family based on Cooper Black, a cozy display classic from the 1970s. The new letterforms are much more precise, contemporary, and fit for screen use.

Anna Seslavinskaya, tomorrow.type.today: I’m seeing more and more of Cooper in my Instagram feed. The font is riding high on the hype wave which might result in a tsunami of fun lettering works, this rendition of Cooper is yet another proof for that.

New Kansas is wider and softer than its prototype, it is also better-tuned for small sizes. My favorite detail is the new f. 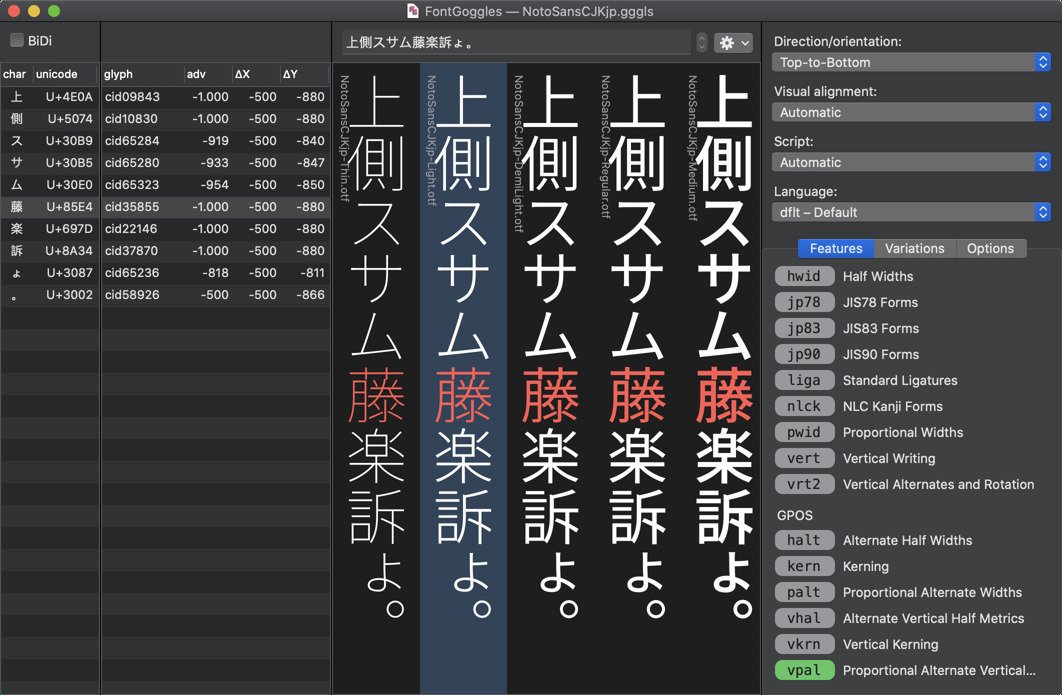 The newly-released FontGoggles is a perfect application for reviewing and debugging font files, made by Just van Rossum, a renowned type designer and a KABK tutor. 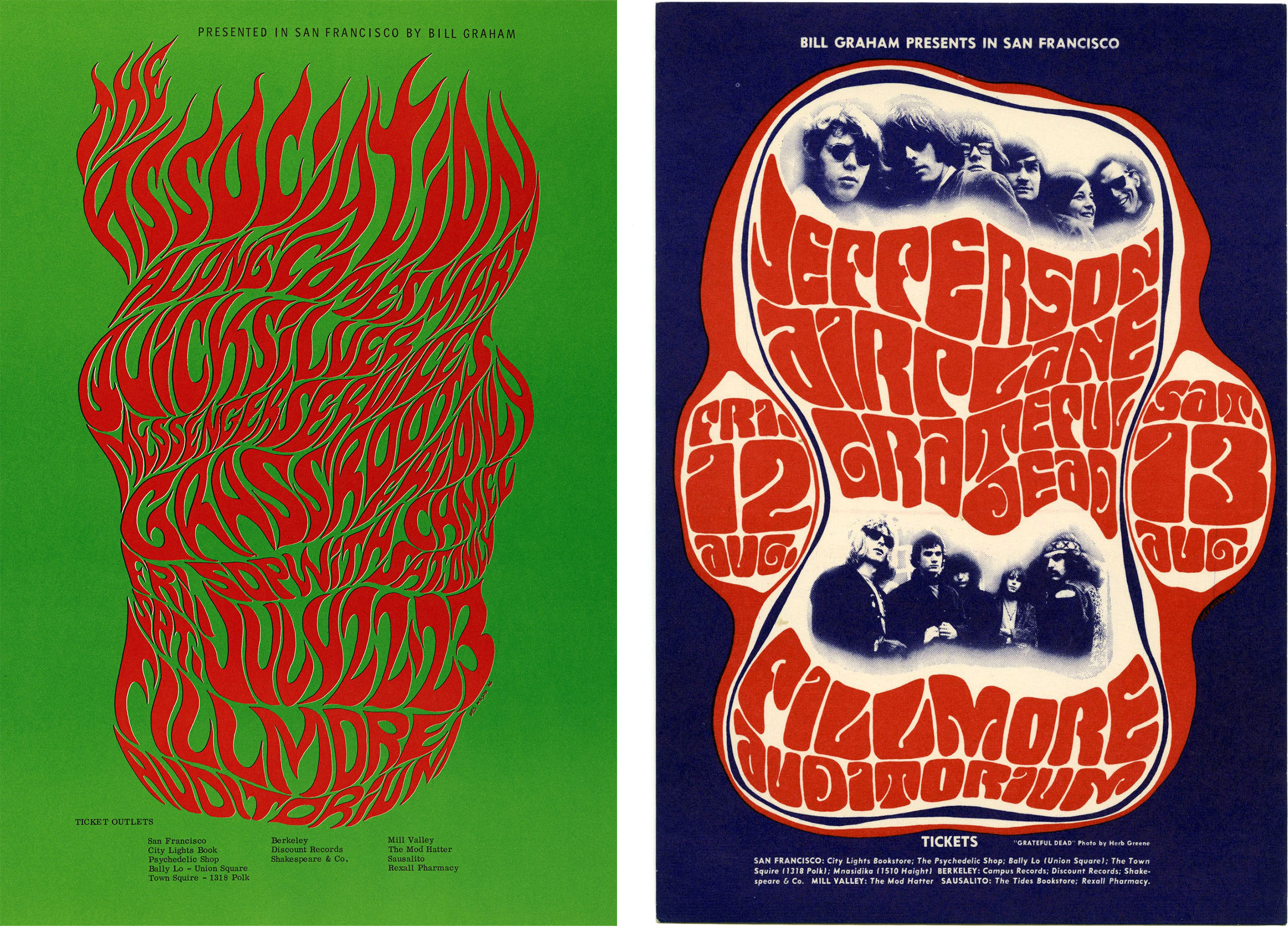 Wes Wilson, the father of the 1960s psychedelic graphic style, died on January, 24. It was Wilson who invented the ornamental typography, which went on to become one of the main symbols of the Woodstock era. He designed concert posters for all major acts of the time, including The Grateful Dead, Jefferson Airplane, and The Beatles.

Anna Seslavinskaya, tomorrow.type.today: Wilson was the lettering artist for psychedelic rock and proto punk, counterculture and gonzo journalism, left-wing activism and Vietnam war protests. Quite possibly, his works on the verge of art nouveau and op art are meant to be viewed in the state of psychedelic trance. In case you are sober, try and watch his prints in the light of the neon lamp, which gives some extra depth and color to all the intended visual effects.

Wilson’s designs are in the collections of the Louvre, MoMA, and Smithsonian Institute. Yet, the most special museum of his work is the hippy district of San Francisco, the city with Wilson’s graphics in its DNA. Wes Wilson’s heritage is alive and well: the better part of installations, projections, and other objects at Burning Man Festival employs the same techniques as the psychedelic art of the Summer of Love era, half a century ago. 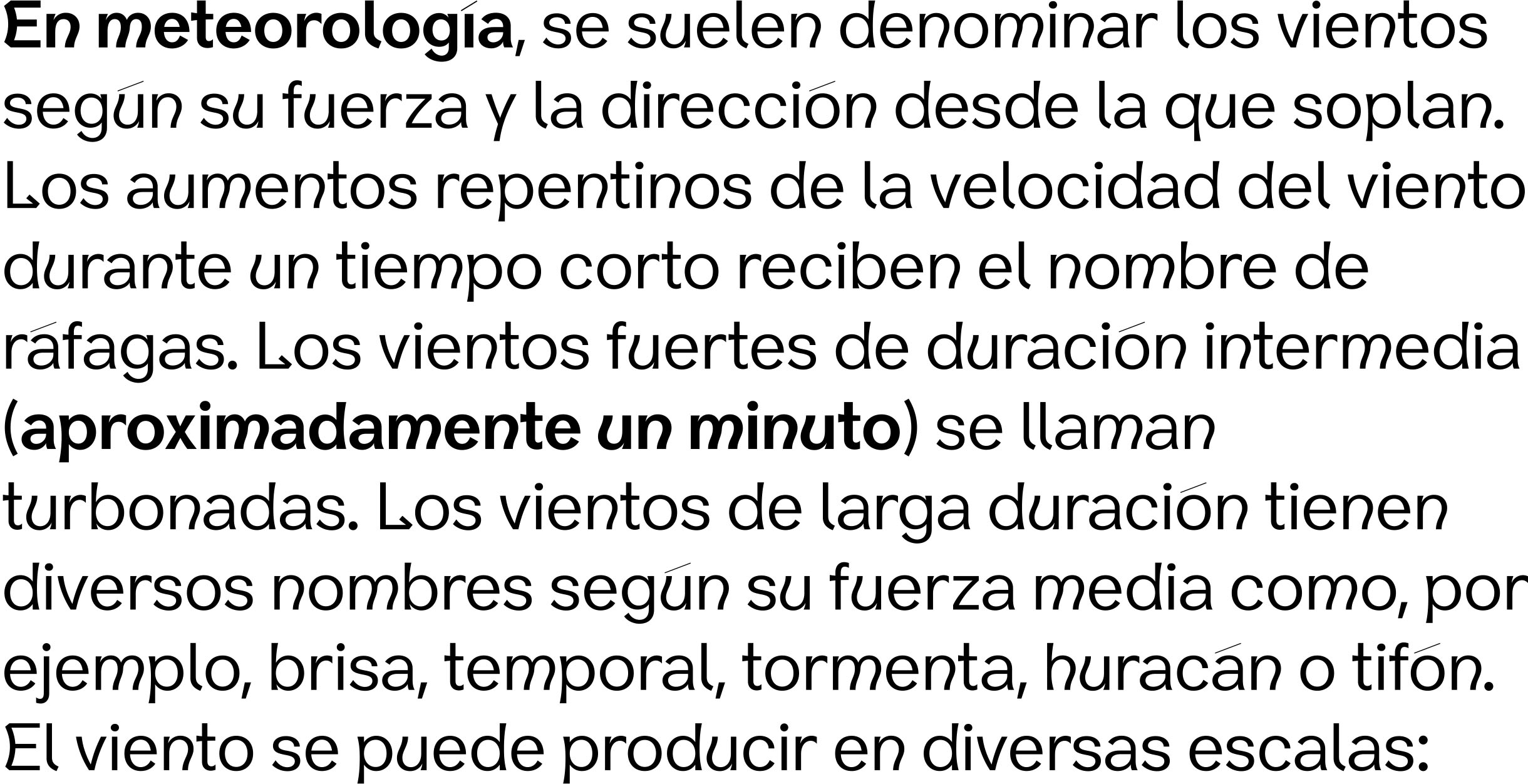 Blow, designed by Yanik Hauschild, explores the ability of sans serif letterforms to deviate, while keeping their core identity. With three quirky stylistic sets, it is a curious hybrid of the modernist hyper-rationality and the humanity of a medieval manuscript.

Alexander Cherepanov, tomorrow.type.today: Looks like another EH Normal by Elias Hanser, in its Jungle style. That font has been a hit, it went viral on Pinterest some time ago. Cool, intricate, alternative — but we’ve seen that before, it might fall out of fashion next season, or maybe in a season. I might miss the main point of the whole neogrotesque-with-medieval-influence thing, it’s just the way I feel — as if I’ve already seen that.

Ilya Bazhanov, tomorrow.type.today: Interesting font, originally made for a graduating work exhibition at Düsseldorf University. Note that Blow was designed with the help of Gabriel Richter, who previously made Massimo Grafia, a sans serif with similarly abundant alternates and quirky letterforms.

Nikita Kanarev, tomorrow.type.today: A fairly special and fun face, which will only work within a specific design concept. 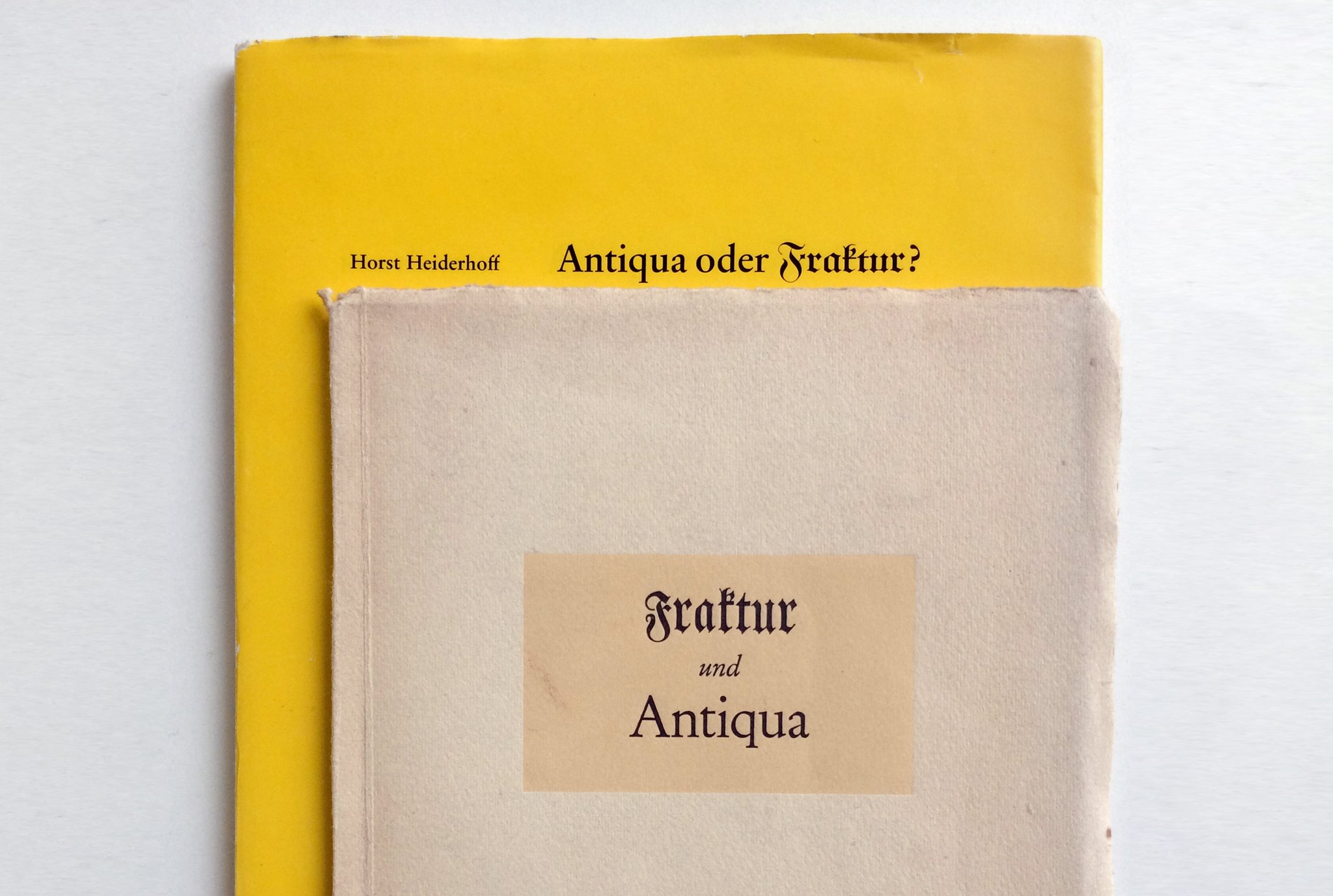 Fraktur is a blackletter script commonly associated with Hitler and Nazism. The connection, however obvious it seems, is only partly accurate: Fraktur, indeed, had been the favorite type style of the Nazis, but in 1941 the party branded it ‘Judenschrift’ (Jewish typeface) and imposed a total ban on it. Hear the long and strange story of Fraktur in a podcast by 99 Percent Invisible (also available as a text article).

Anna Seslavinskaya, tomorrow.type.today: The podcast is a full and comprehensive dive into the history of Fraktur, including its darkest years. For me, the most unexpected use of Fraktur was a personal card of a concentration camp inmate, issued in 1941. This artifact ignited my interest in the typography of the Third Reich. And the podcast filled many gaps in my knowledge.

The headline phrase — Once a Nazi Font, Always a Nazi Font — rang especially true to me, after I began working on HealthGoth. Fraktur is going to remain the most controversial type style for many years to come. 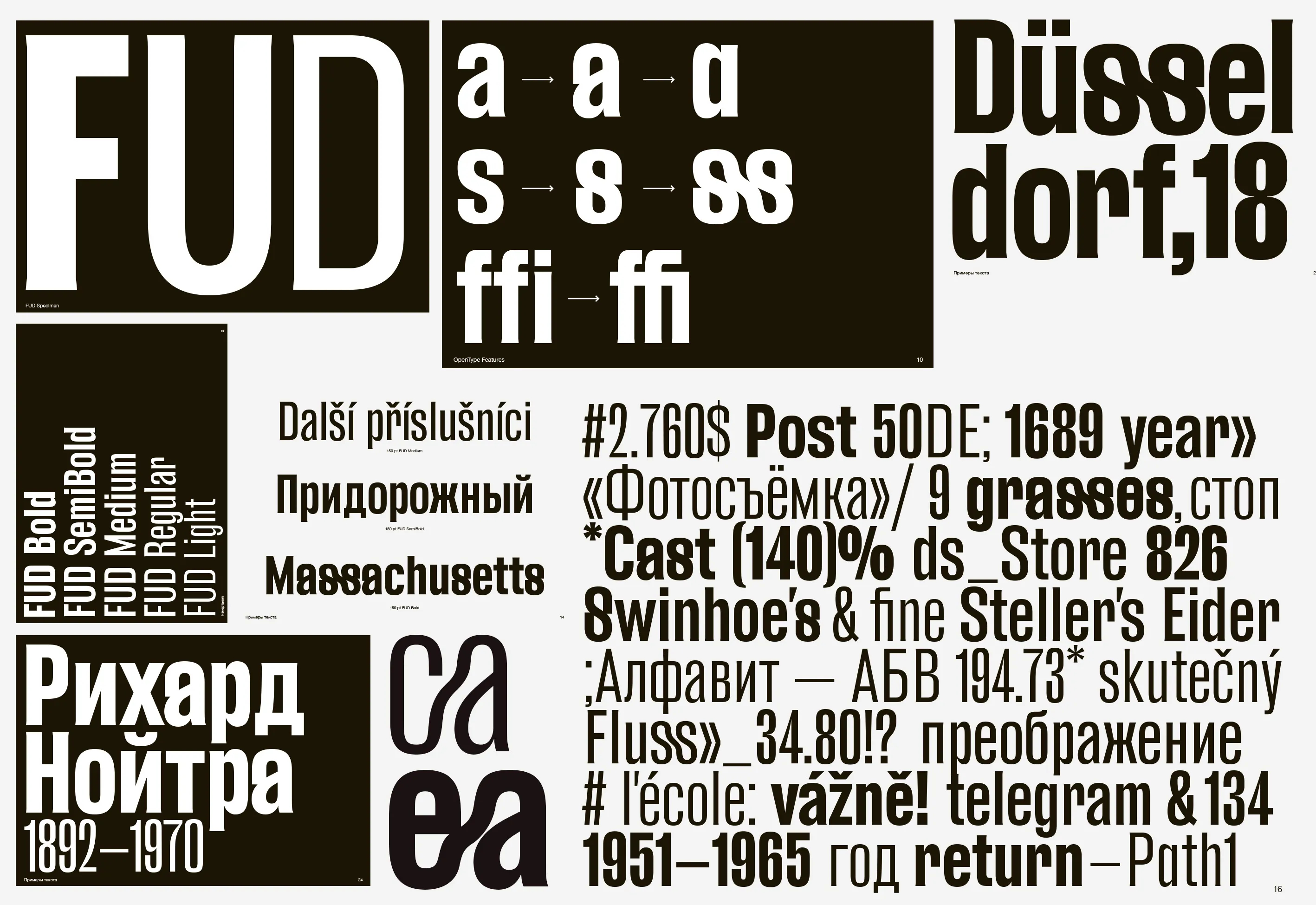 Ilya Bazhanov at It’s Nice That

Ilya Bazhanov, a graphic and type designer, talked to It’s Nice That about studying in Czechia, growing up in the industrial background of Chelyabinsk, Russia, and the interest for the Soviet 1960s. Don’t forget to check out Dusseldot, made by Ilya Bazhanov and Max Barbulovic, available on tomorrow.type.today. 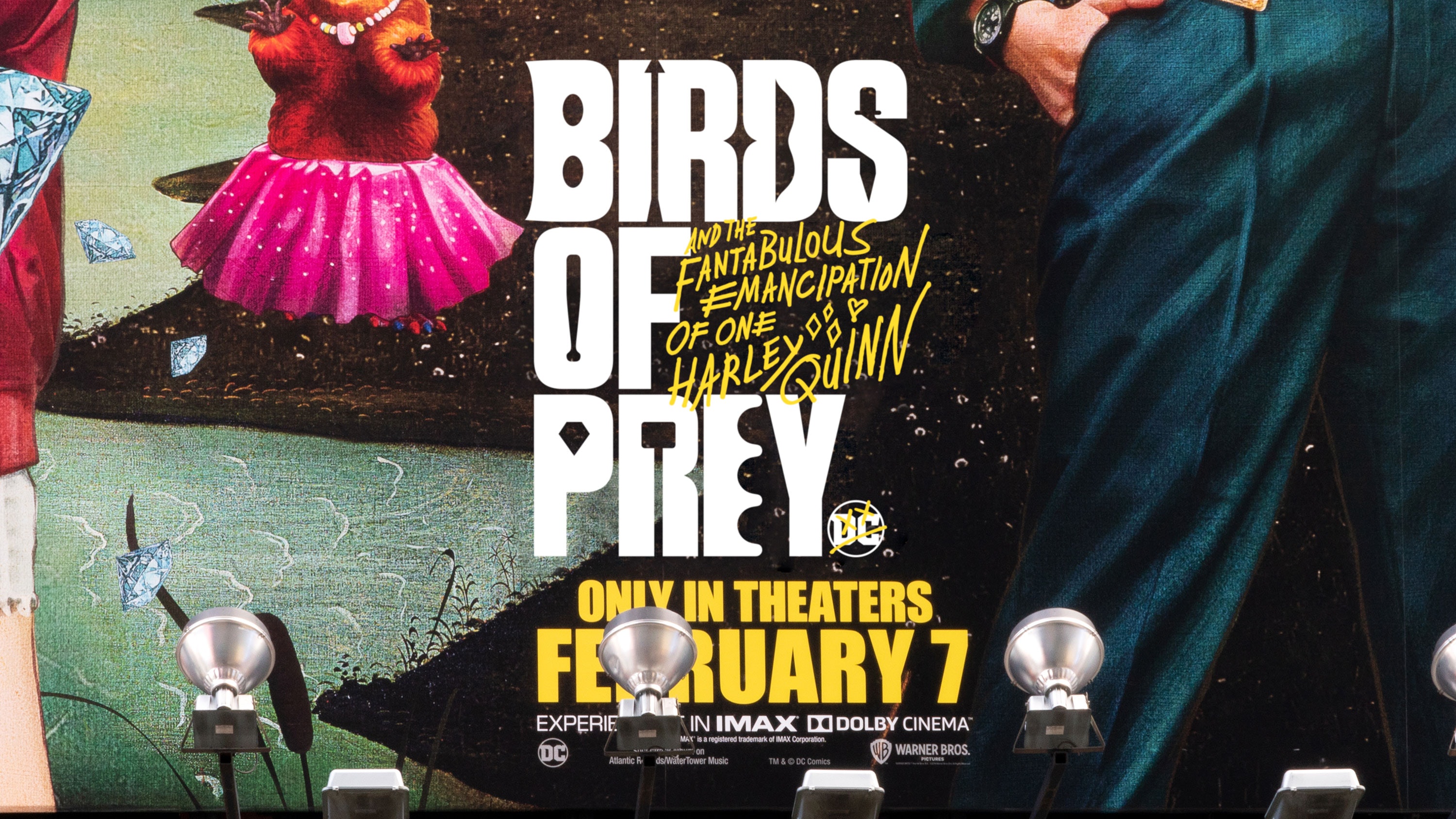 Type design for Birds of Prey, the new DC movie

Pentagram designed custom typography for Birds of Prey, the new blockbuster movie based on DC comics. The kitchy logo hides something in its counterforms, while the custom typeface Hysteria Hand speaks for Harley Quinn herself.

Ilya Ruderman, type.today: I remember first seeing the poster in a subway station in Barcelona. I don’t usually have that strong feelings towards graphic design, but in this case, I not only disliked what I saw, I felt some sort of physical repulsion. ‘What nasty stuff!’ — I thought — ‘I wonder who designed that’. Having learned about the authorship, I felt ever more appalled.

Yeah, the design has some clear explanation — it’s not simply made the way it is, the designers have a rationale for every detail and every decision made. Yet, I can’t help myself — it is simply something I can’t get used to, and I consider it a grand failure in terms of graphic design (which is rare for Pentagram). They could’ve done the same thing a million times better.

Anna Seslavinskaya, tomorrow.type.today: Great example of working the counterform without injuring the legibility. The easter eggs fit like a glove, even the hastiest of readers wouldn’t stumble at these letters. My favorites are the B and the D.

Alex Slobzheninov, tomorrow.type.today: Cutting outlines in letterforms is such a cliche trick — yet Pentagram managed to make it cool. 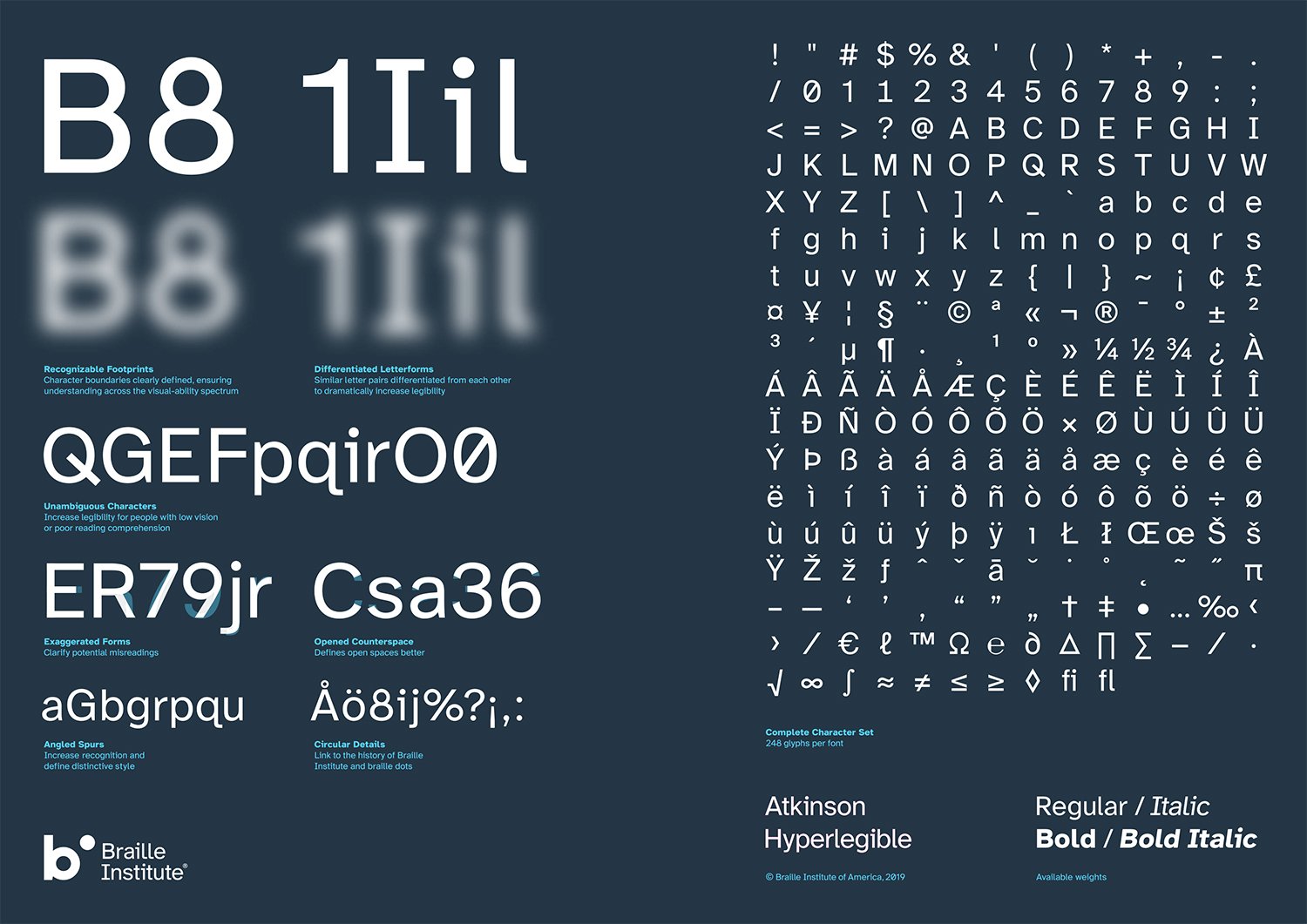 How to make ‘hyperlegible’ type

The New York agency Applied came up with the idea for Atkinson Hyperlegible while making a graphic identity for Braille Institute, the leading American organization for the blind and visually impaired. In their talk for Type Directors Club, Applied reflect on the design process of the font in which you can easily distinguish between the glyphs 1Iil — even if they are distant and blurry. 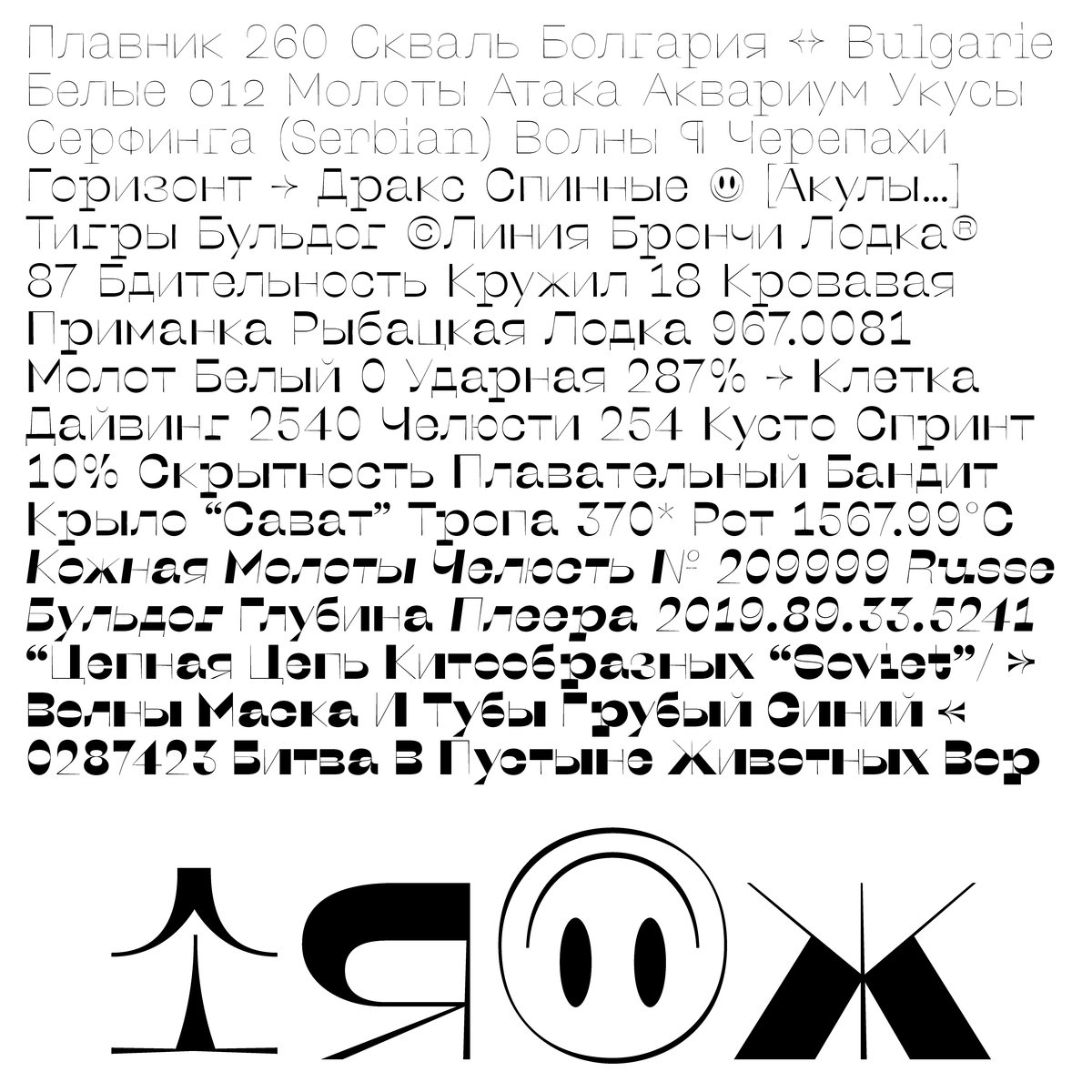 Ilya Bazhanov tomorrow.type.today: Sometimes it is hard for a non-native to grasp the fine details and the vibe of the Cyrillic glyphs. More so, in such an experimental font with many letterforms invented from scratch.

Alexander Cherepanov, tomorrow.type.today: Reverse-contrast sans type seems to have fallen out of fashion and out of use. Yet, this take on the genre feels fun and fresh as ever. 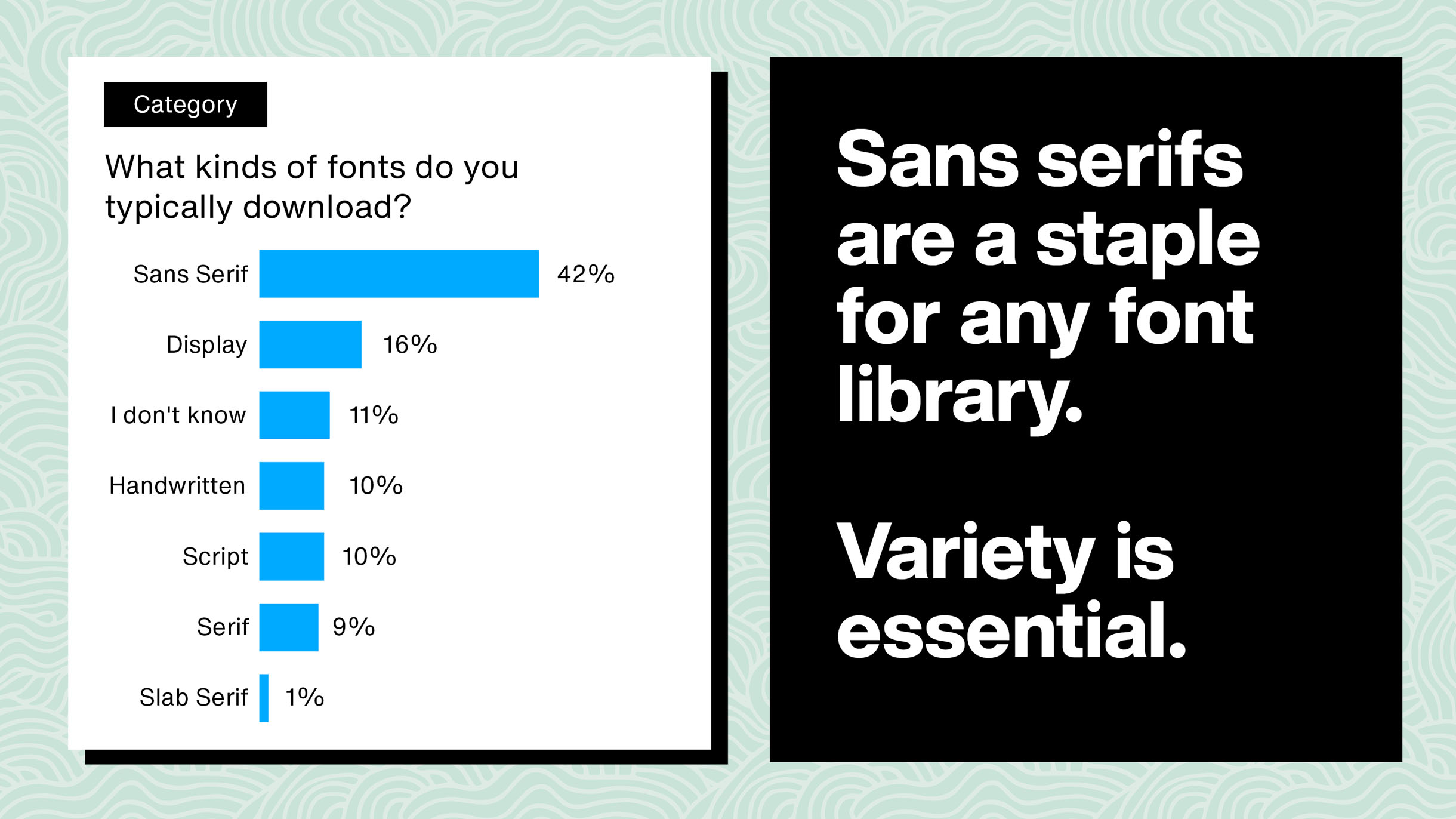 Ilya Ruderman, tomorrow.type.today
The survey is very large and quite objective, too. There are many interesting points in the final results:

Anna Seslavinskaya, tomorrow.type.today
Impressive things to know, even if you don’t want to read the whole text:

We have some new releases at tomorrow.type.today: the super-display monospace Nostra by Lucas Descroix and Curbe by Olga Pankova, a script face exploring the visual style of the Soviet 1960s.

Alexander Cherepanov, tomorrow.type.today: Hurrah, just hurrah. Nostra had been a font of the future even before its final version, and now it is available at tomorrow. Lit stuff. 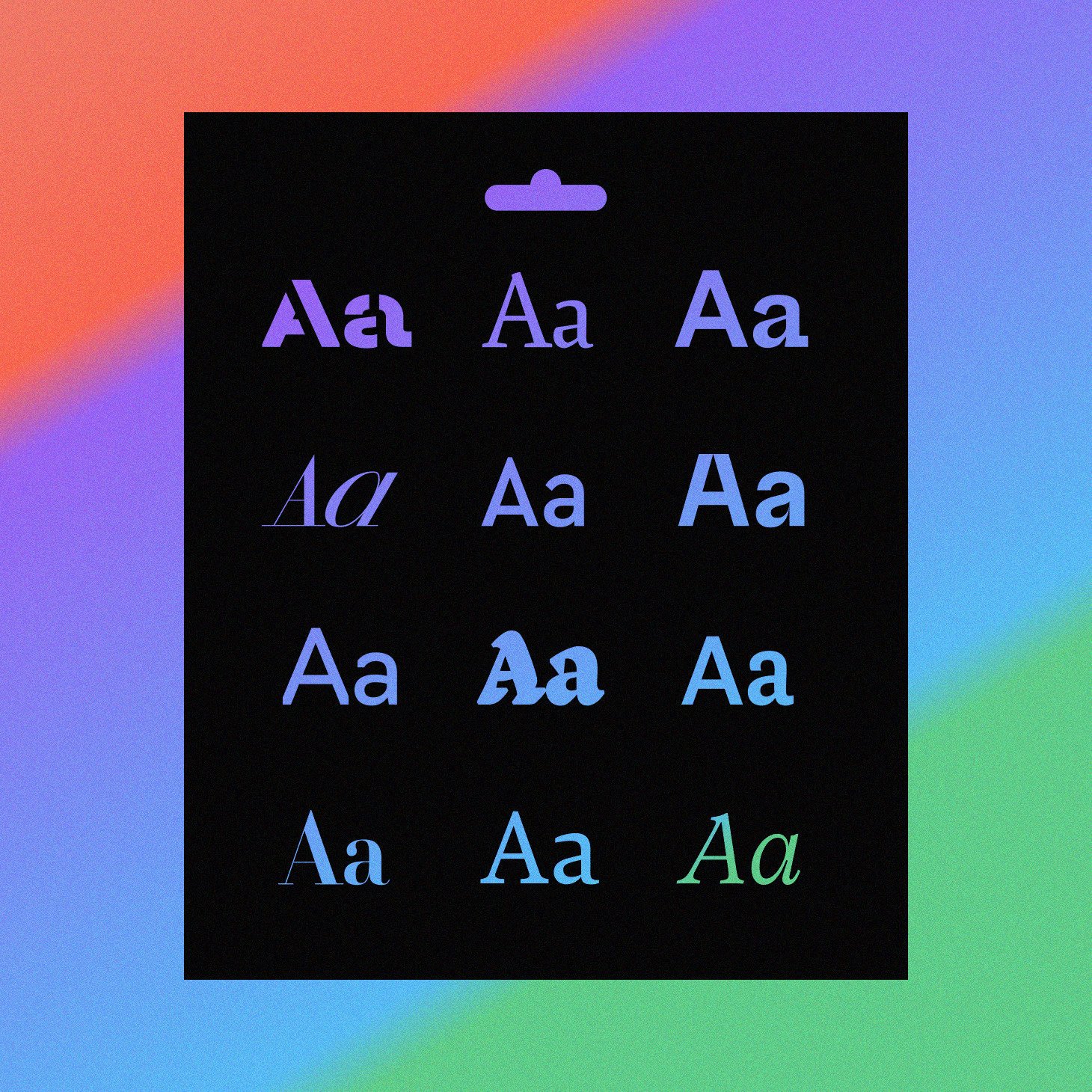 Grigory Mashkovtsev made a plugin for previewing our catalogue in Figma, now you can generate a sample of any our font right in the design application. Thanks a lot, Grigory!

Anna Seslavinskaya, tomorrow.type.today: Hurrah, that’s a great solution for those who have to test a font in Figma, yet do not have a font library subscription. 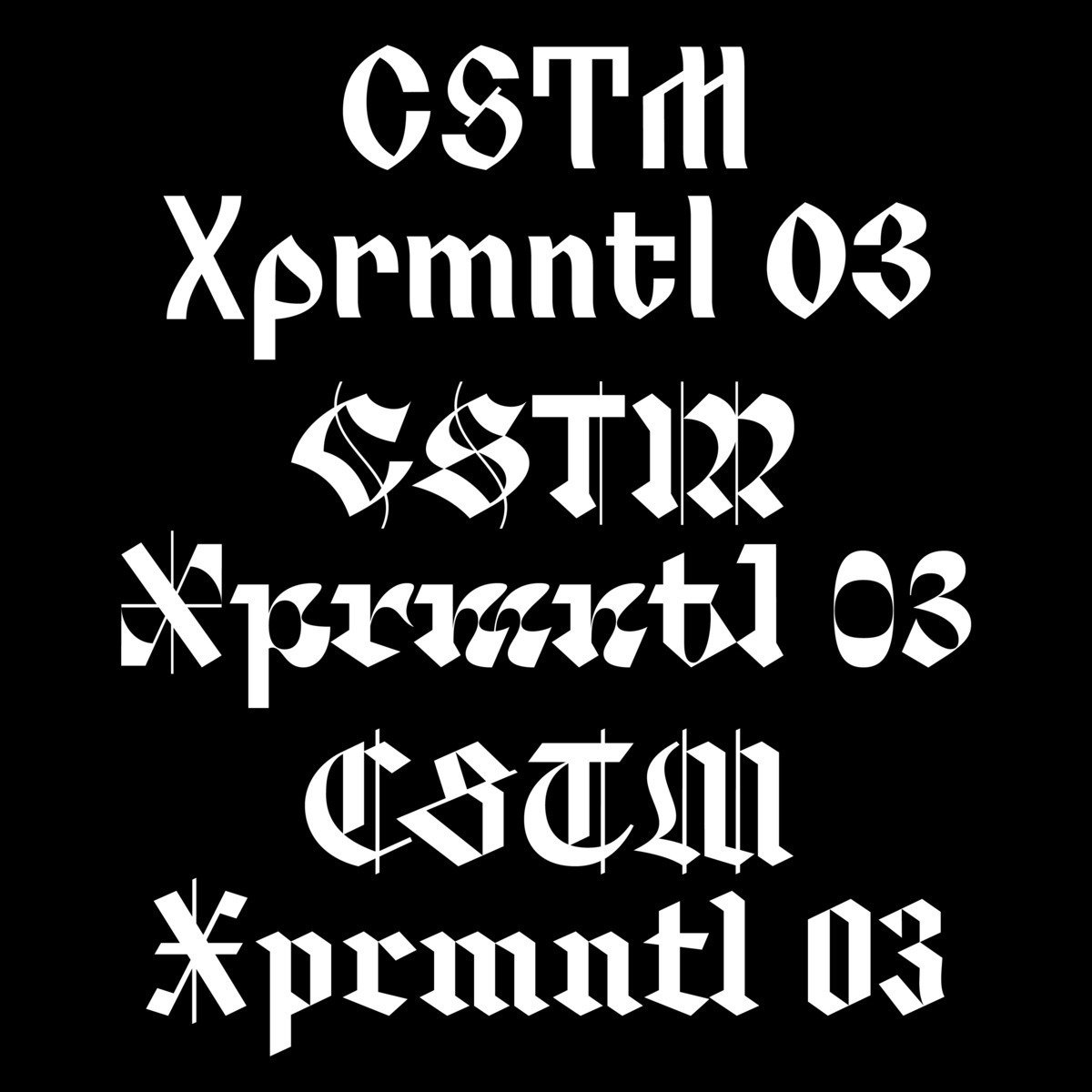 Xprmntl 03, the longest-running of the ‘quick’ projects by CSTM Fonts, received an update. The new version at Future Fonts includes Latin capitals and Latin diacritics.

Anna Seslavinskaya, tomorrow.type.today: I strongly recommend to check out the animation of the font’s variability — I’ve admired that stuff ever since I saw it on CSTM Fonts’ Telegram channel. 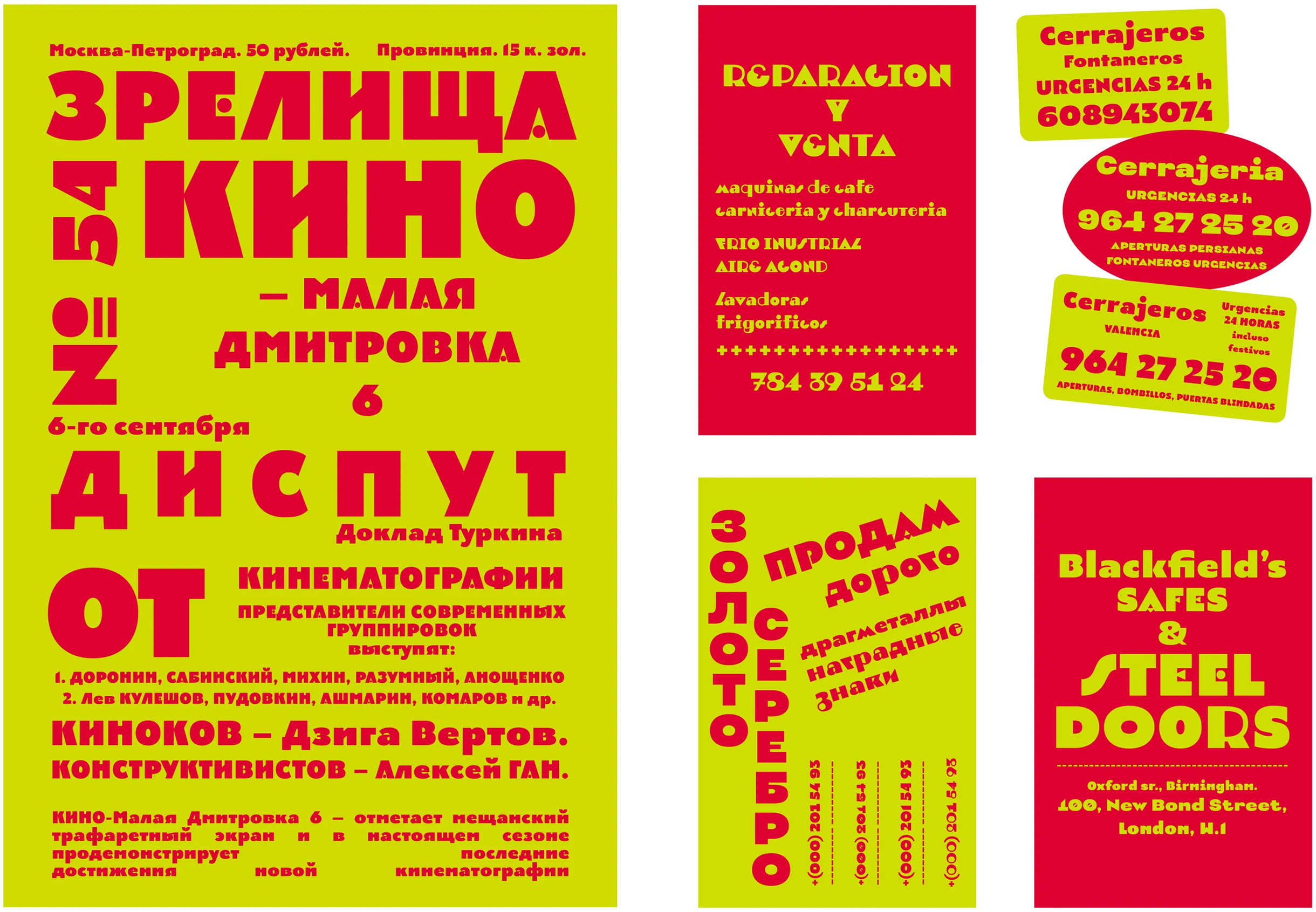 A specimen of Pilar by CSTM Fonts

The founders of type.today and CSTM Fonts (a store and a type design studio) Ilya Ruderman and Yury Ostromentsky talked to It’s Nice That about their introduction to type design, their art direction experience, and how to be a type design team while living in different time zones.

This February Dima Rodionov was in charge of our Instagram.

It is the first time the whole month-long tenure had one specific theme — Dima made a visual project about plastic waste and recycling. Thanks, Dima!

Arsen Mollakaev, our instagrammer this March, also exercises the conceptual approach — he’s making a brandbook for the Northern Caucasus region.