Small, yet important category — in which we found better type than we expected

Today, a free font doesn’t necessarily mean a bad one. Sadly, browsing Cyrillic fonts is still like walking in a minefield; but there is also some good news. Our critique and our advice do not have a monopoly on the truth — that’s just an expert review by three professionals sharing the same values. Plus, you always have to remember that there is no such thing as forbidden means and tools in design. Any bug can be turned into a feature in the hands of a daring, confident typographer, — only before taking risks, you should figure out what this bug actually is.

What is an old-style serif?

Those are serif typefaces, forms of which are influenced by broad nib writing. Historically, this category includes serifs dating back to Renaissance and Baroque as well as their modern revivals. The old-style serifs are marked by open apertures, diagonal stress, low contrast, and significantly varied glyph widths.

The typeface was named after an Argentinian musician Astor Piazolla, the revolutionizer of tango. Expressive graphics with angulous calligraphic stroke joints — with a certain allusion to Medieval writings, Piazolla looks sharp and fresh.

Hands-on Piazzolla has a modern approach to proportions — widths of straight and oval glyphs are close to each other. The typeface is compact, with large x-height — it would be efficient and effective in small sizes, but thanks to its bright personality can also work as a display typeface.

The typeface is equipped with small caps, old-style and uppercase figures In modern typefaces, figures are typically as tall as uppercase letters and stand on the baseline, which is why we call them lining, uppercase, or caps figures. The figures of the height of lowercase glyphs, with ascenders and descenders, are called old-style, or lowercase — those were the figures in ancient typefaces from which dynamic serifs actually inherit. Both variants of figures can be proportional (for texts) and tabular (monowidth, for use in tables)

— proportional and tabular; Roman figures are introduced in a stylistic numeric set; it also has ready-cut fractions, sets of super- and subscripts, numerators and denominators, currency signs, math and service characters. Piazolla supports the majority of languages using Latin script and Greek, and its Cyrillic is even fitted with superior and inferior letters (often used, for example, in scientific papers, ordinal numerals and footnotes) — you don’t often get that in a free font.

Styles 9 weights from Thin to Black with corresponding italics:

Each weight has a range of optical sizes: from 8 to 28 points.

The typeface is available in variable format with weight and optical size axes.

Cyrillic Piazzolla is fitted with a proper-quality Cyrillic with well-chosen constructions — they comply with the Latin part in terms of personality.

The Cyrillic was designed with the help of a Bulgarian type designer Krassen Krestev.

Breve on the Й looks a bit too small, lacking both weight and contrast.

Interestingly, Cyrillic symbols, compared to Latin ones, have less white space on the right side of the glyph. This does not create problems in setting straight text in Cyrillic, but when setting a multilingual text, spacing becomes uneven .

Cyrillic — Latin — Cyrillic: the second space turns out to be larger than the first one

Some outlines that make up glyphs were not merged In a variable font, letters consist of several (usually intercrossing) vector outlines — which is necessary for interpolating forms. When designer makes a static style, they usually merge these outlines — in order to let go of unnecessary information and avoid possible mistakes when displaying. while creating static font files — this can cause problems in displaying on screens and in print.

Piazzolla is a well-developed type family — usable and expressive, equipped with a good quality Cyrillic, but with small technical shortfalls.

Hands-on Low x-height, rather long ascenders and descenders, while the forms have lots of small details — therefore the typeface requires generous line spacing and not a very small size.

Styles The typeface has 5 weights from Normal to Black with italics.

Glyph forms are generally relevant and in line with Alegreya Sans.

The specific form of Cyrilic Кк appears not very logical — it could have easily been copied from Latin.

Дд with a crumpled bottom left corner spoils the impression:

In densier styles, Д spreads to the right even more, while Лл changes quite dramatically — the left stroke is now abruptly cut.

In certain web browsers, you can notice separate outlines that make up the glyphs, while in the desktop files all outlines are merged.

In smalls caps, Latin Y acts as an У — in this case, copying the uppercase Latin form is incorrect. The same problem was detected in Alegreya Sans.

Alegreya is better suited for working at medium and small sizes. The Cyrillic is far from perfect, while Cyrillic small caps should not be used at all.

EB (Egenolff – Berner) Garamond is a revival of the specimen set by Conrad Berner at the Egenolff print office in 1592. This specimen of Claude Garamond (perhaps the best known one) was used as a base to create plenty of digital versions — but only this one is licensed free of charge.

Hands-on The forms are a rather unsubtle tracing of the original source. That explains a certain irregularity of outlines, rounded small details and serifs — those are random letterpress artifacts reproduced in vector format:

The typeface is quite light, with low x-height, long ascenders and descenders — such proportions work well at large sizes.

As is often the case in recreating Garamond’s typefaces, italics use the work of Robert Granjon as a model. The material is taken from the very same specimen Egenolff — Berner and digitised in the just as straightforward manner, with minimal compensations.

Styles 5 weights from Normal to Extra Bold with italics, as well as a variable font with a weight axis

Heavier styles — for which there is no historical specimen — turned out worse, uneven in density, as well as with certain issues in letter spacing. The example above shows the dark а with insufficient inner white, the pairs bu and rg that are stuck together, a far-removed, very light tail in f.

Cyrillic Cyrillic was obviously designed with an eye to Adobe Garamond Premier (by Robert Slimbach) — as it is hard to explain such coincidences in the absence of a historic prototype. However, it is certainly not a mechanical copy — despite identical constructions, the letters differ in proportions and approach to details.

The most obvious difference is the use of the more contemporary (to a Russian eye) square Дд and Лл in EB Garamond:

There are certain issues in terms of the consistency: in glyphs ц, щ the descender’s shoulder is different.

Furthermore, this detail looks different in lowercase and uppercase letters.

A very long tongue in э. The з is falling to the right and there’s too much air on its left side.

Ы falls apart in Italic; the letter spacing in АТ is an obvious problem.

Letter spacing is also imperfect in lowercase Italic: in this example, рг are stuck together, while there is a hole between ик.

EB Garamond is a straight-line revival with conceptual and particular borrowings from Adobe Garamond Premier. The quality is poor, so whenever possible it’s best to use the original.

Cormorant is a display family inspired by serif typefaces of the French Renaissance. In spite of referring to Claude Garamond’s typefaces, Cormorant is not a revival of any specimen.

Hands-on A light and contrast typeface; smooth curves, long ascenders and descenders, sharp and thin serifs — everything seeks to transfuse the elegance of Garamond’s typefaces, clearing those from the impact of letterpress technology. The abundance of small details makes the typeface a better fit for large sizes.

Styles There is a number of subfamilies: the main Cormorant Roman, Cormorant Garamond with alternates and increased inner white in several signs, Cormorant Infant with one-piece and simplified forms, small caps Cormorant SC, and Cormorant Unicase. Roman, Garamond, Infant are fitted with regular italics, while Roman also has vertical italics — no Cyrillic included.

Each subfamily comes in 5 weights, from Light to Bold.

Cyrillic The Cyrillic is basically compliant with the Latin part of the typeface, although subfamilies use different forms — and the logic of those differences is not always obvious.

The different form of the б — in Roman, it rather corresponds to didones than to old-style serifs. For some reason, Garamond’s Cyrillic у has a different descender terminal compared to the Latin y.

That said, in both italics the form of б is the same and complies with the upright б from Roman.

Letters Ии, м in Garamond have a different form, which is rather typical for earlier type styles, reminiscent of capital Latin writing.

Infant offers a Bulgarian Cyrillic by default; switching is possible through stylistic alternates. 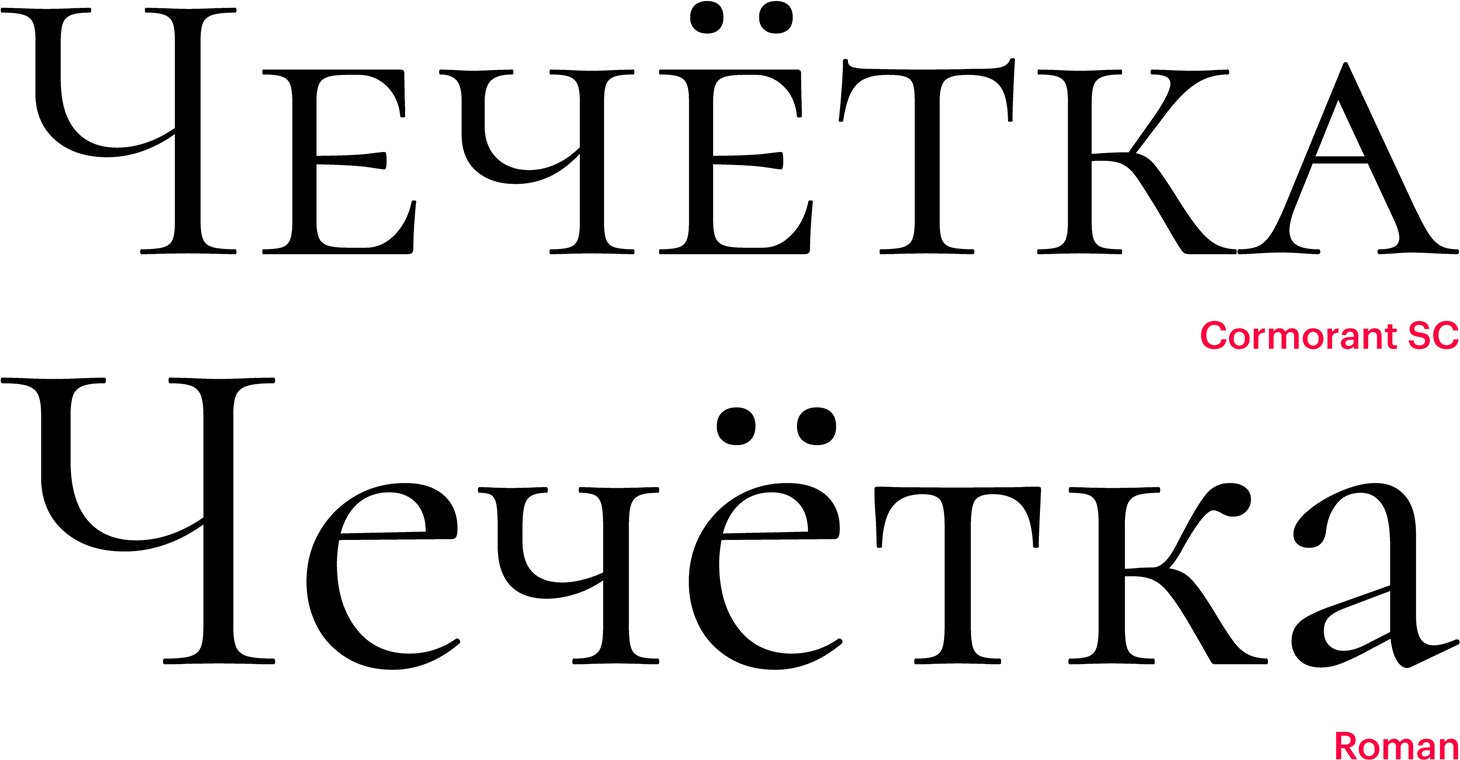 Чч have evidently different character in various cases and styles, the most relevant is the lowercase letter in Roman and Garamond.

In Cormorant Roman, the arc of the uppercase Ч has thickness distribution atypical for an old-style serif.

Cormorant is suitable for use, but you need an outstanding level of attention to figure out the system of styles.

A text typeface addressing the history of French type design, yet modern and versatile, well-suited for screen reading: Spectral was above all designed as a typeface for Google Docs and Google Sheets, teamwork office tools.

The design of Spectral was inspired by a 19th century typeface (Elzévir № 9, released in 1882 by the Warnery type foundry) — however, the final product has gone a long way from the historical specimen. Spectral has moderate contrast, open apertures, and diagonal stress, typical for an old-style serif typeface.

Hands-on High-quality outlines. Systemic and consistent design. Proportions and detailing are quite pragmatic: simple forms, right angles, vertical cuts (including when it comes to italics) — all this contributes to good rasterisation and general clearness, even on low-resolution screens. Large sidebearings may seem excessive, but it is precisely thanks to them that Spectral creates a substantial, calm rhythm and works great in large texts.

Styles Spectral has 7 weights, from Extra Light to Extra Bold with corresponding italics.

Cyrillic Spectral Cyrillic was designed by Ilya Ruderman and Yury Ostromentsky, two of the three authors of this review

Spectral is available on type.today — as is the case with Google Fonts, completely free of charge. In our version, small caps are included in the main typeface, and we offer the entire glyph set — including extended Cyrillic. Unfortunately, in both official versions the uppercase Ы has too much white space between its two parts — we are now waiting for Google to fix this flaw.