In 2015, Zangavar publishing house issued a book of graphic novels inspired by oriental mythology. We spoke to designer Ilya Zherikov about how it feels working on translated comic strips, his love for Amalta, and how, when put in the right place, a typeface turns into an oriental one

Zangavar is a micro-publisher made up of ‘two and a half men’. I worked there from 2013 till 2017. Initially, we were publishing classics of European and American comic books, but in 2014 our art director Volodya Morozov visited a big European festival in Angoulême, saw books by Sergio Toppi and got very enthusiastic about publishing those in Russia. It was clear, though, that this was a more serious age true graphic novels for the adult audience.

While we, sad and slow, prepared the book for publication, buying the rights, I was designing a typeface to set bubbles. But then came the crisis of 2014, and no one had whereas royalty had to be paid in euro. While laying out pages of the book, I remembered Amalta. And then I couldn’t stop figuring out how to arrange it for us, as on MyFonts it cost €and in the autumn 2014 this amount became a lot of money, especially for a small publisher. And typed the titles of chapters on MyFonts and after the website generated how they would look, I took screenshots and inserted them into my layout, hoping it would catch on. And indeed, it caught on so well that when we were already at the finish line, it was a shame to drop it. So, our art director agreed on purchasing Amalta directly with Vera Evstafieva. It was happily bought and has taken on a life of its own. 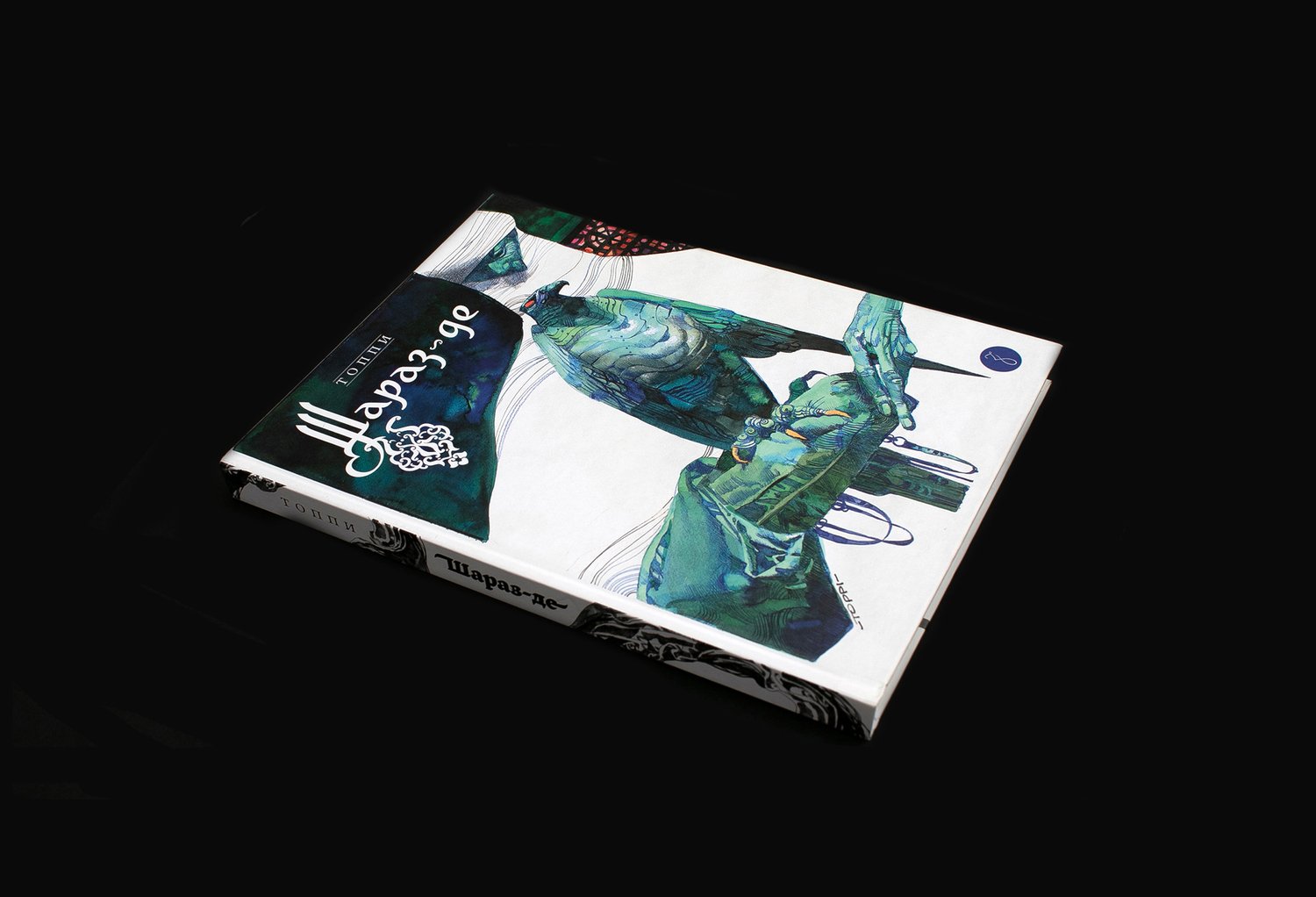 The book itself is not even a paraphrase, but rather a variation of the Thousand and One Night, very delicate and truly beautiful. Some of the novels are precise versions of famous Arabian Nights. Others are not Arabic, but narrating about how everything is vain and futile, how everything will pass, and how nothing matters.

How does it relate to Amalta? Hell if I know. First of all, in headlines Amalta plays the role of a certain ground wire. See, there is this very fine-drawn and volatile graphics, ink and watercolor, and Amalta-set titles appear like large milestones next to this graphics. You’re walking down the road of novels, and at the beginning of the map you’re met by a large and rough milestone set in Amalta, telling you the name of the chapter. And then everything becomes light, easy and airy again. 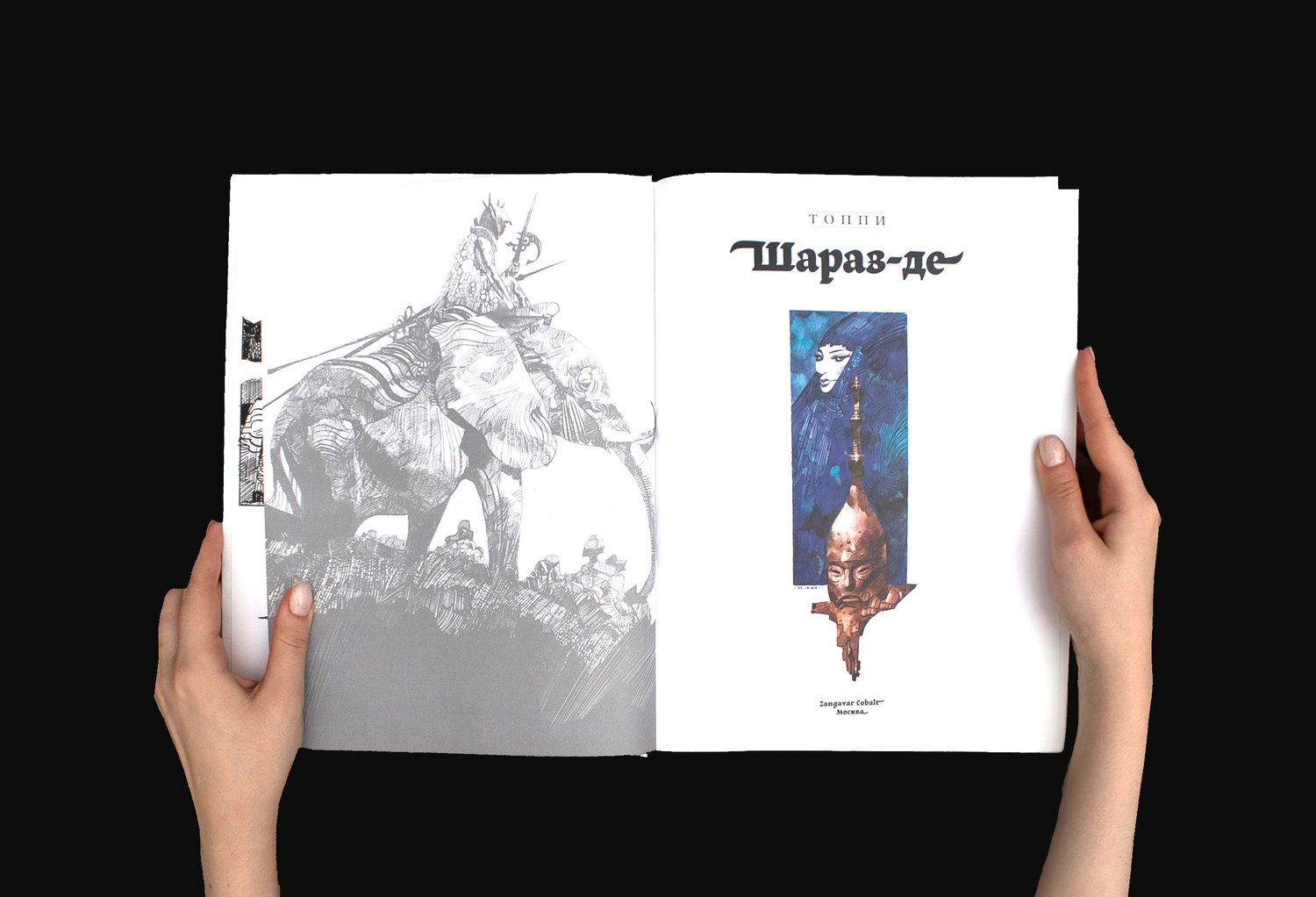 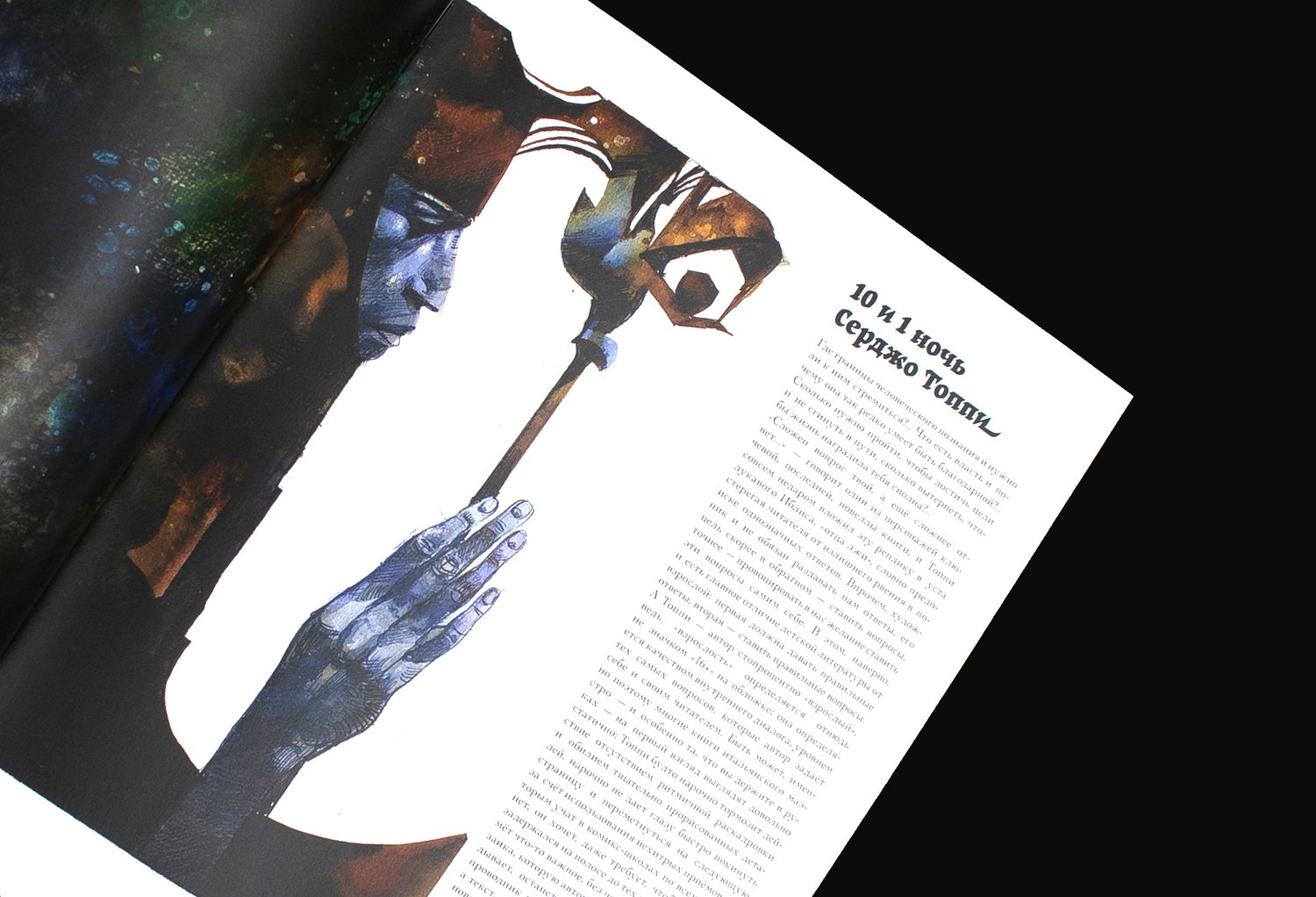 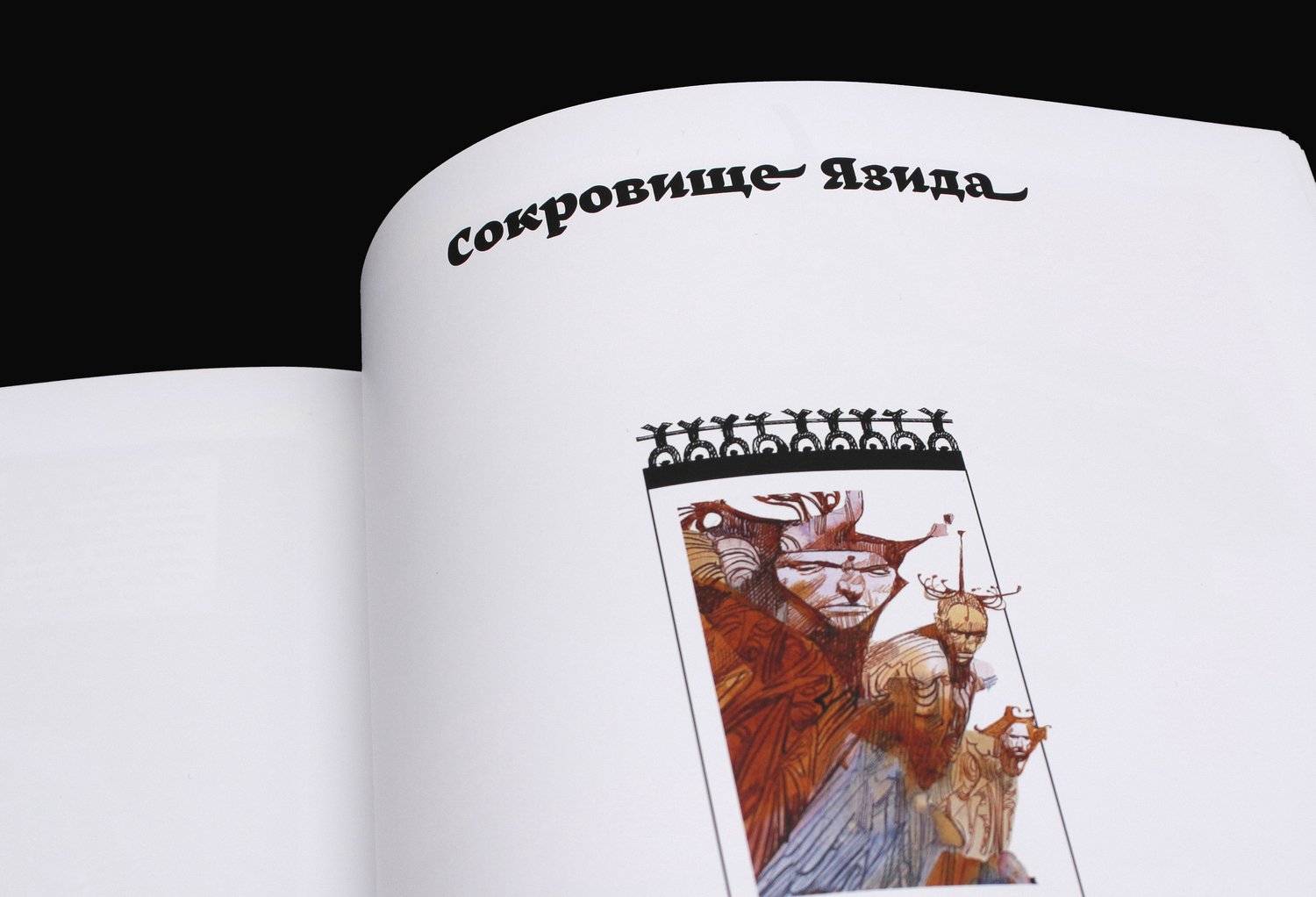 Why Amalta? Nothing to do with the fact that in love with her as soon as I saw it. Why did it fit so well? I did a little research and realised that in Cyrillic world anything even slightly Arabic-related is either set in the unfortunate typeface Arabskij, which is a literal stilization of Arabic ligature script, or typed using a dense calligraphic typeface. Such as Frutiger’s Ondine, for example. It is equipped with a highly amateur Cyrillic set, quick and dirty as if it was sketched on a napkin. It is often used to set all these Arabian Nights, Aladdins, Bazaars, even though the typeface is originally based on Gothic scripts. Actually, one of English-language editions also used this very same Ondine. Apparently, we’re not the only one to apply it on such books.

Another typeface in this category is Legende by Friedrich Hermann Ernst Schneidler. It was reissued by the name of Aladdin and is still used.

So, next to them I saw Amalta which also had a certain oriental not just those distinctive terminal strokes, something else. I won’t be able to explain any better. On the one hand, in terms of some of its plastic solutions Amalta is very similar to early Kufic scripts; on the other, it looks very much like late Gothic for example, quite a lot is inherited from Rotunda. A magic of the tool, flat brush. That’s amazing. 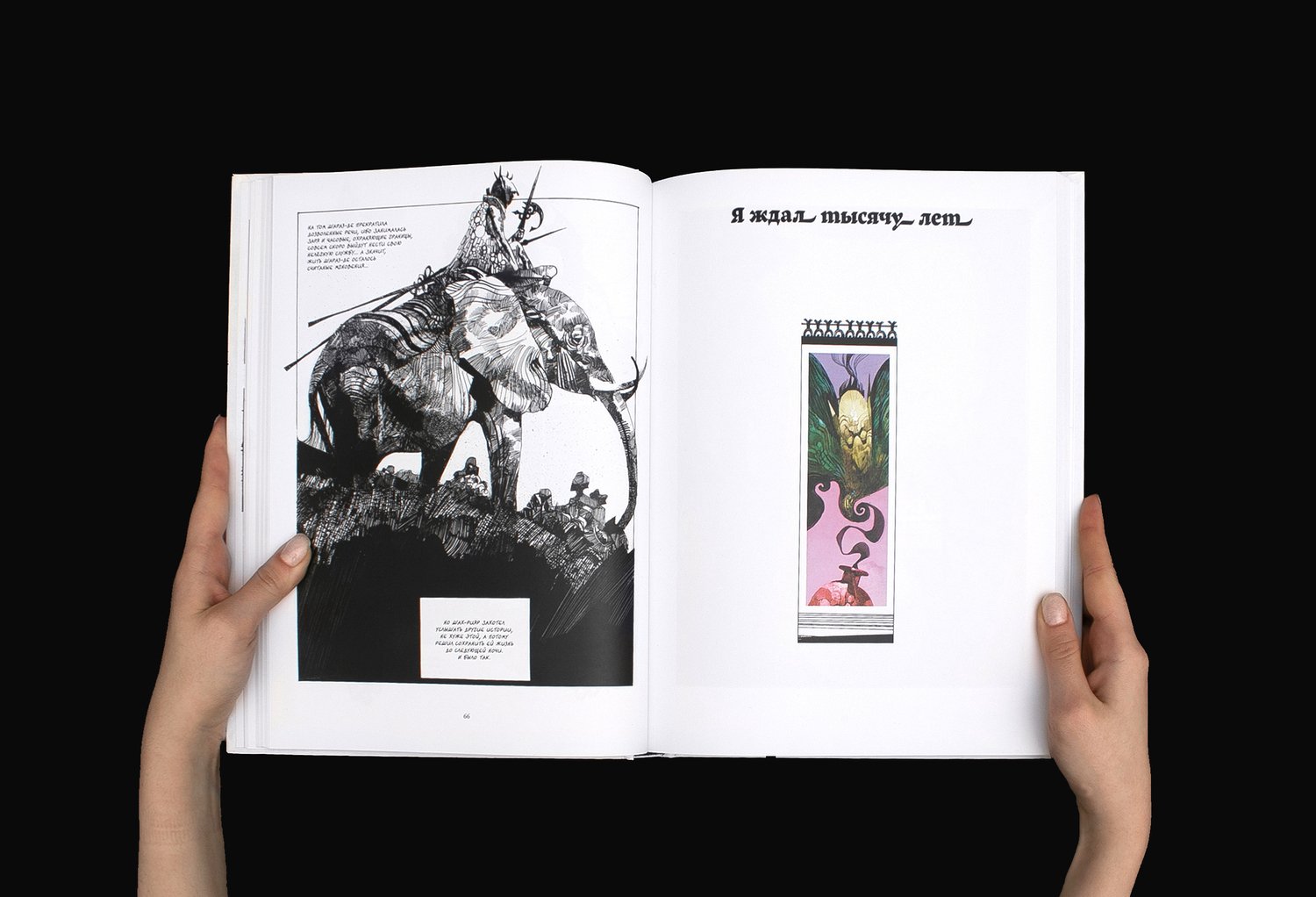 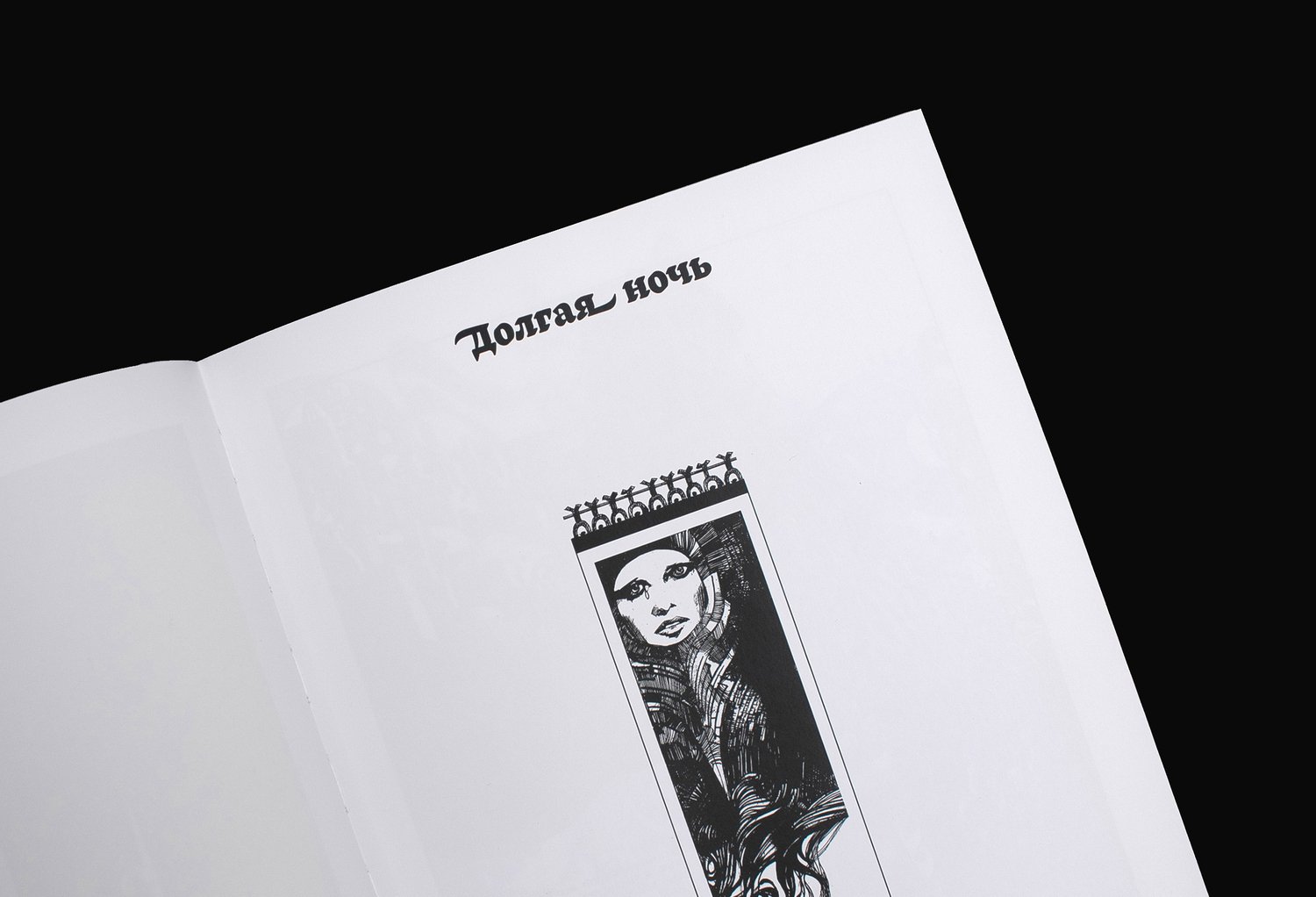 When I first saw Amalta, it didn’t seem oriental to me. Yet I wondered, ‘and what makes a stylised typeface oriental, after all?’

Joint-up, ligature-like merged writing, to start which there isn’t, even though letters are put close to each other. Arabic and Persian scripts only have spaces between words (it is very rare to see any space between letters within one word).

Secondly, the oriental origin is indicated by a calligraphic reed pen, or qalam. It is a special nib, a hollow reed stick with a stem cut in a special way. Its shape enables serifs like in Ш and terminals such as А has. Actually, here the use of qalam is obvious in each letter.

In Arabic tradition, a stroke departing from Ш at the beginning of the word is called تطويل (taṭwīl), while in Persian it’s کشیده‎ . Those are used to tie letters in justified texts. They definitely add some oriental flavour, however the use of such elements at the beginning or in the end of the word is impermissible in Arabic script (although valid when it comes to Persian calligraphy).

One more thing: in the word Sharaz’de كشيده is coming from the center of the last letter. It is impossible in Arabic ligature script, as those extensions can only be deployed in the bottom of the line. Sometimes this is used in stylised simply connecting all letters by a strip on the baseline level.

Amalta is based on flat brush writing, and the organics related to the fact is quite obvious.

There is definitely something non-westerly blackletter that we see here, but sadly I have no idea who this Amalta actually is. Because of (not despite) its unique identity, the typeface makes absolutely no claim to any specific literary or other genre, which is a good thing.