NATI (Russian abbreviation for New Archive of Limited Edition Art) is an initiative of Shaltai Editions gallery, an homage to the project conceived by Moscow Conceptualist artists Andrey Monastyrsky, Lev Rubinstein, Nikita Alexeev back in the 1980s. They packed the works of artists close to their circle into Folders, calling them the Moscow Archive of New Art (MANI). Each participant put a new work they wanted to submit into an envelope, while a compiler brought all the envelopes under one cover and wrote an accompanying text.

NATI folders are arranged the same way, but apart from the works by Moscow conceptualists there are also contemporary artists, and the folder does not look like a regular archive folder tightened with a string. Every NATI folder is produced in collaboration with a certain artistic institution such as the Tretyakov Gallery, or the Pushkin Museum.

Working with an archive was working from scratch. You have to figure out a construction that would be ‘one of a kind’ functionally, and which would firmly pack several objects of various sizes into this folder.

It took us a few months to design this thing, but it is actually very simple. There is an aluminum plate at the bottom. The works are packed into semi-transparent plexiglass folders; the folders on magnets, are put on screws. Over the folders, we placed another layer with a booklet and gloves, covered with an aluminum plate with general information on the project: year, the list of artists and the name of a partner institution (in the case of the third Folder it’s the Pushkin Museum). The entire construction is fixed with screw nuts for safekeeping.

As the topic of the Folder is narrative, we decided that the process of the reader’s interaction with the archive also had to correlate to the curator’s concept. And the construction is designed so that you can’t see the last work if you have not seen all the previous works.

The Folder’s graphic design — its captions, cover, upper are the last thing to be designed. When the construction was ready and agreed on, I embarked on a booklet to define the entire graphic language of the project in it, and use it in the design of the Folder and exhibition space. 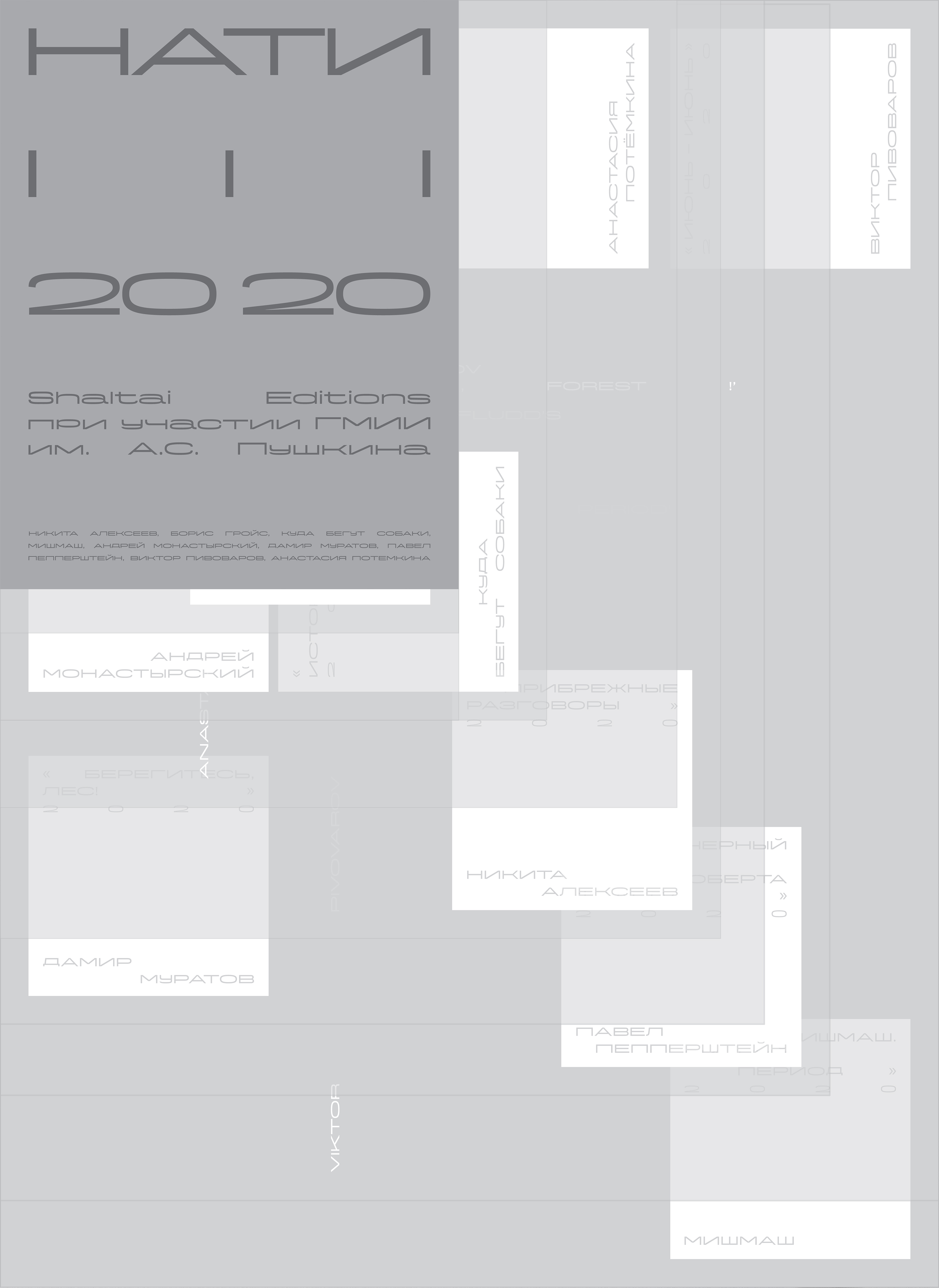 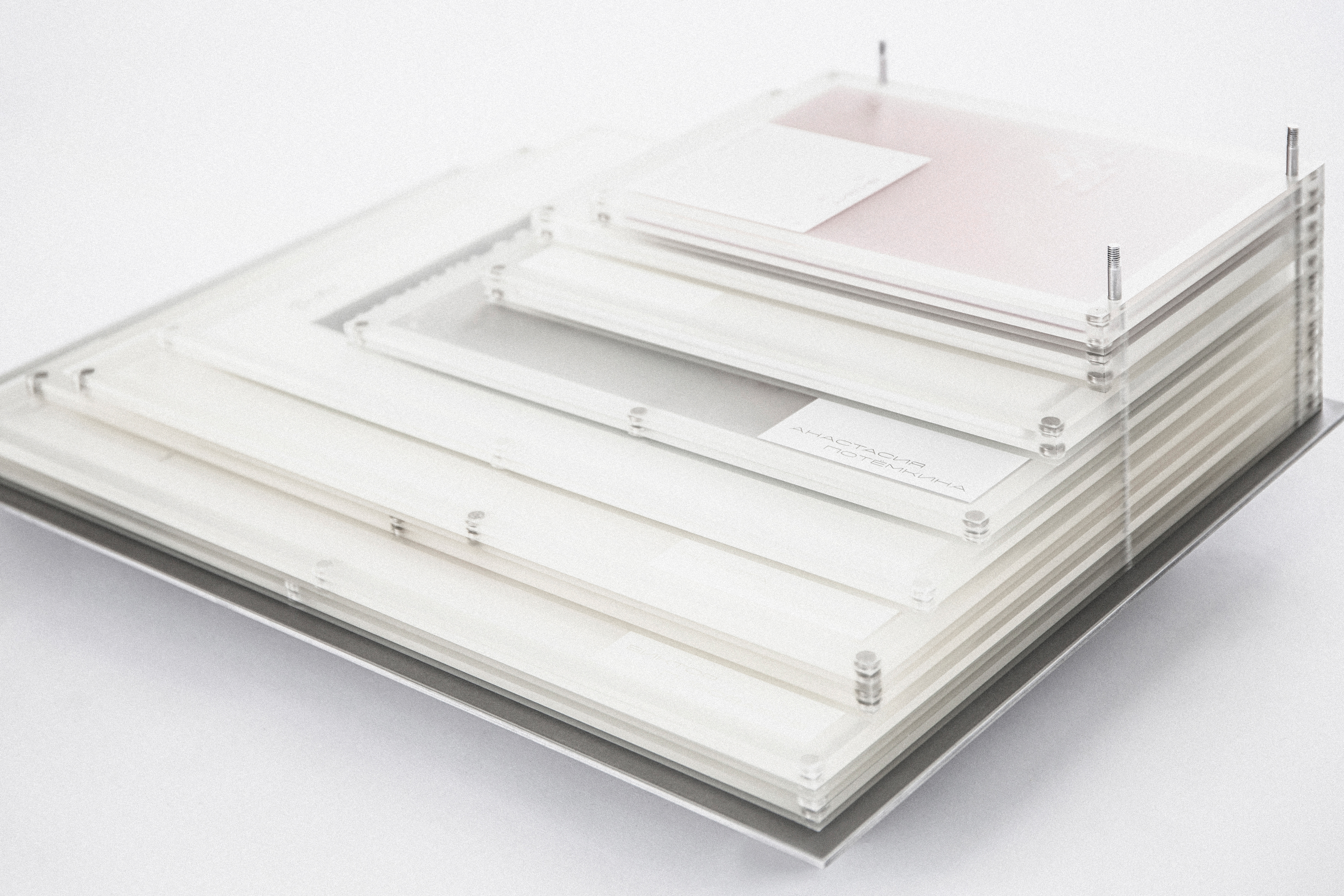 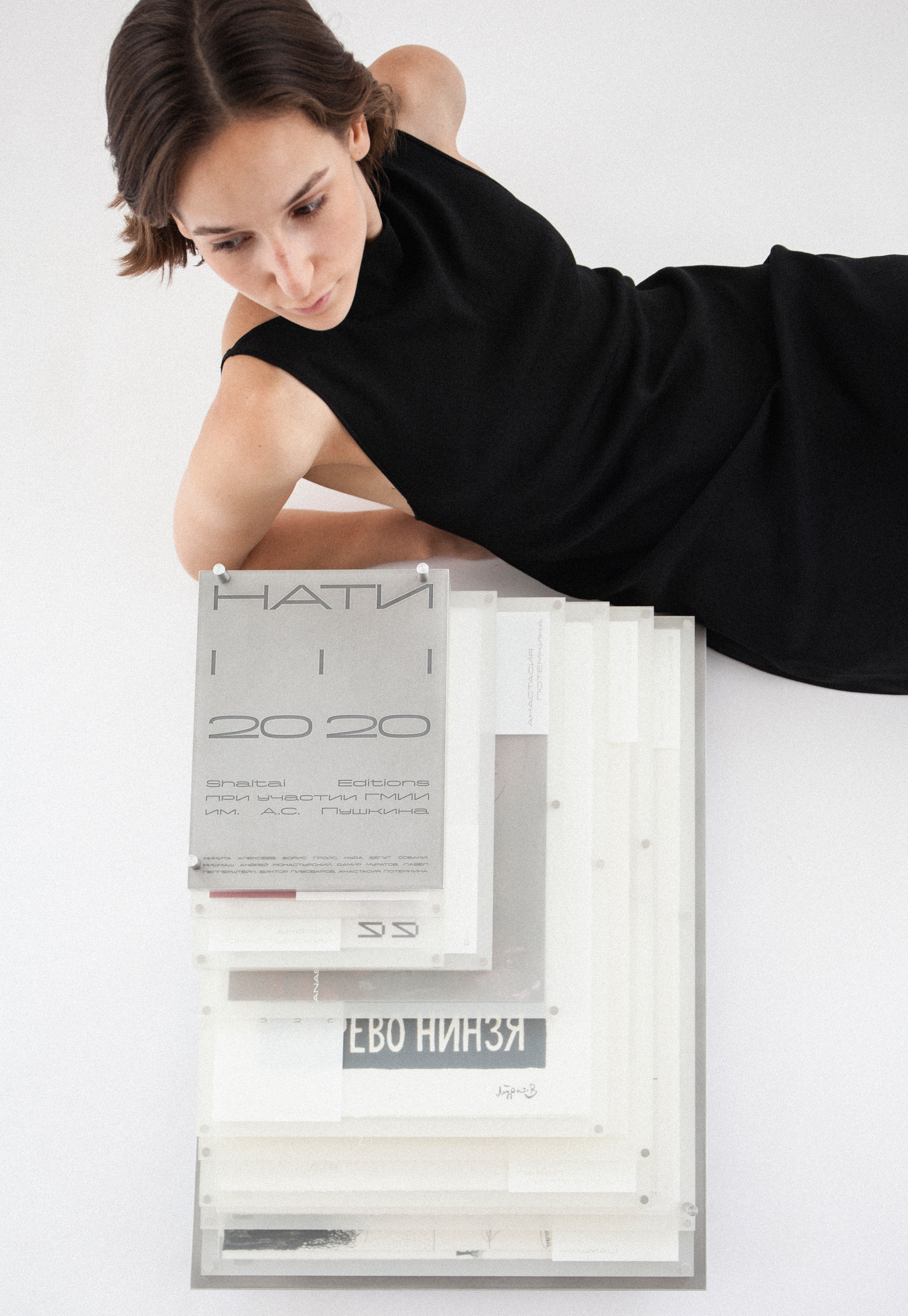 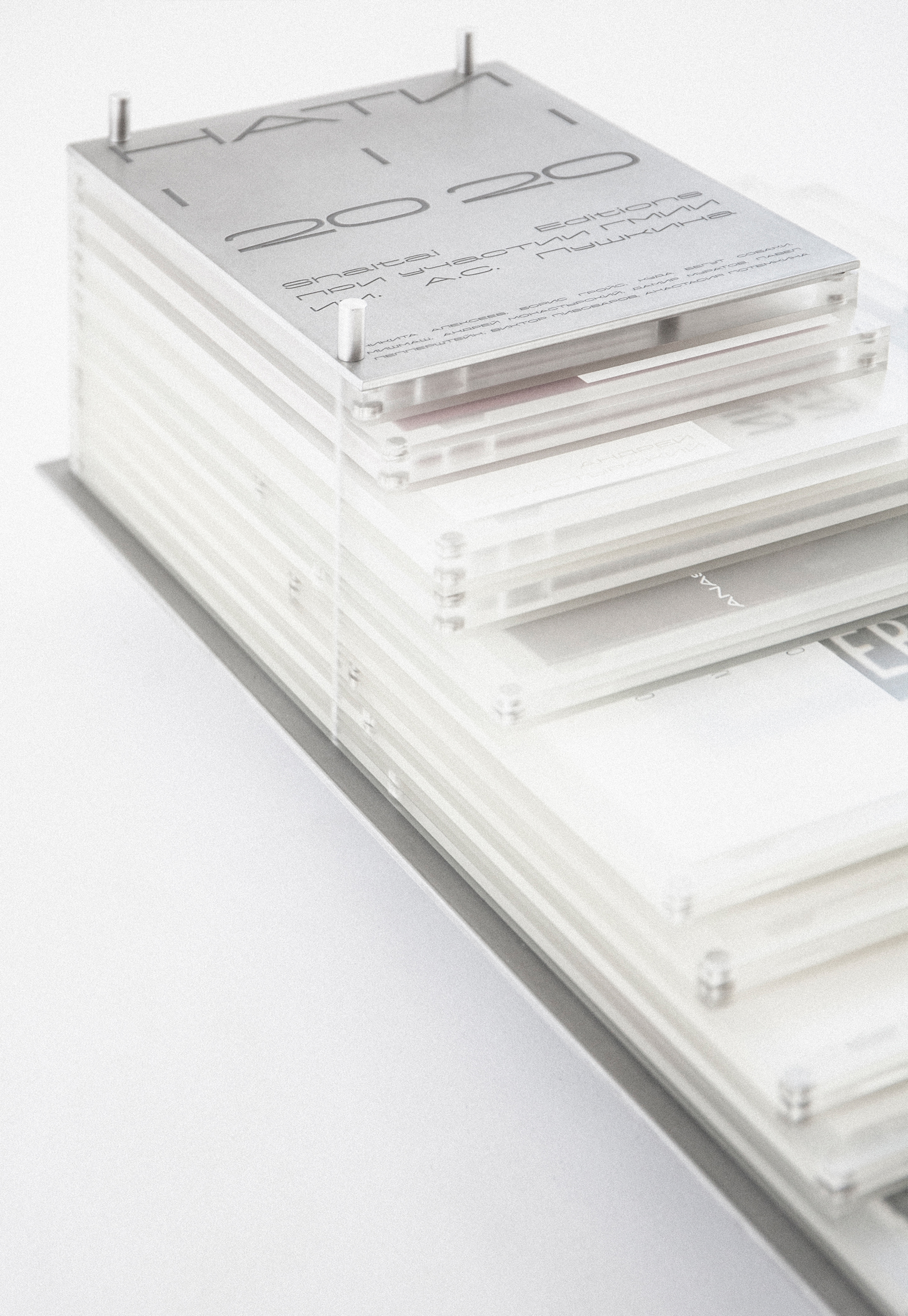 When it became clear that the construction would be made of metal and plexiglass, I started looking for a typeface that I would associate with these Brutalist and wide. I decided to play with and found out that Metal was a perfect fit for it. I chose it has a certain balance, not too stretched and not too narrow. The typeface does the large part of the work for you in page headers and at large even two words on the line look good.

Metal is quite difficult to read in body text, probably. But it was important to me to preserve the project identity, a certain general feeling, so I decided not to pair it with anything. The texts are rather small here, I would never make people read Metal in large it is too wide to spend more than 15 minutes with it. 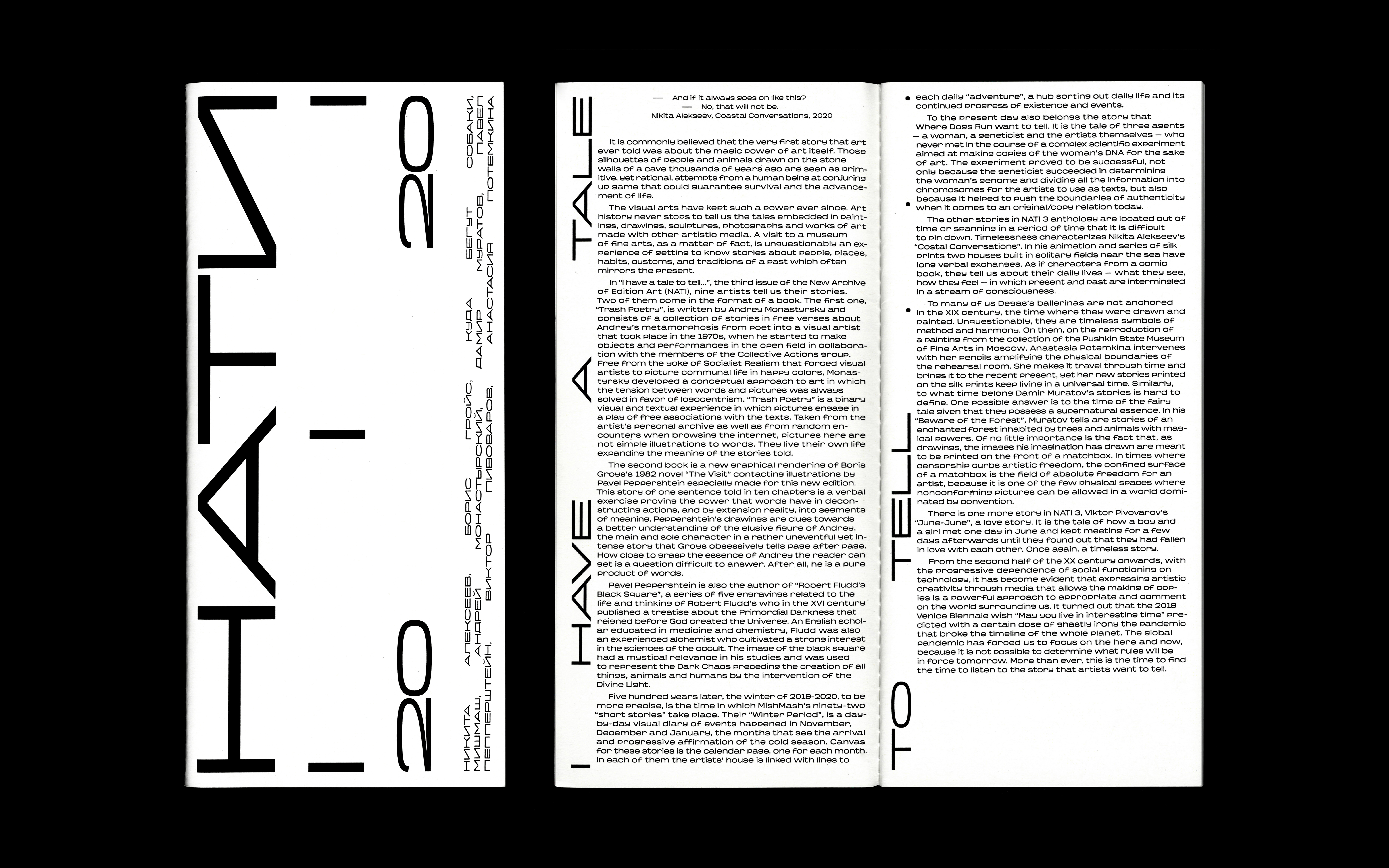 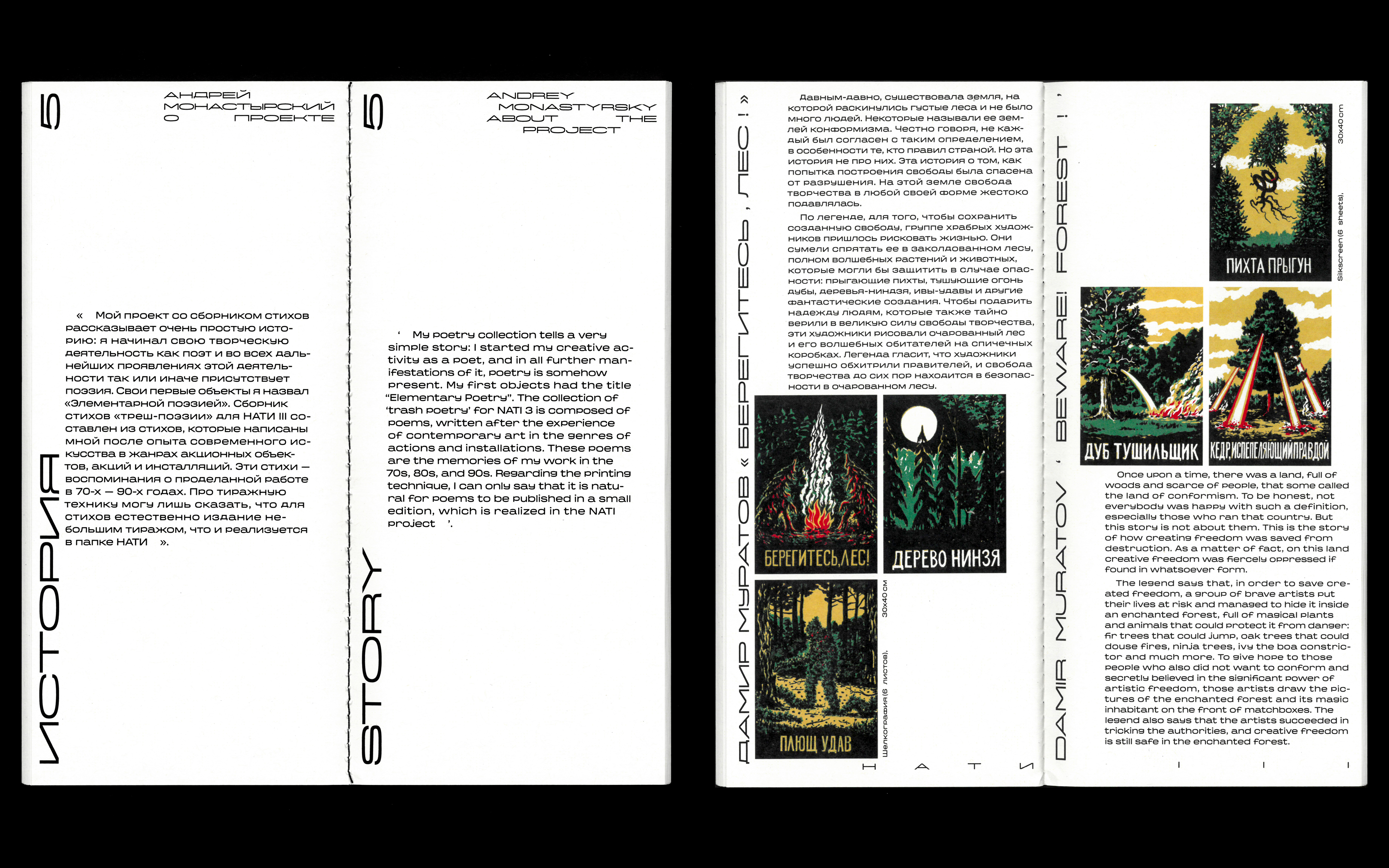 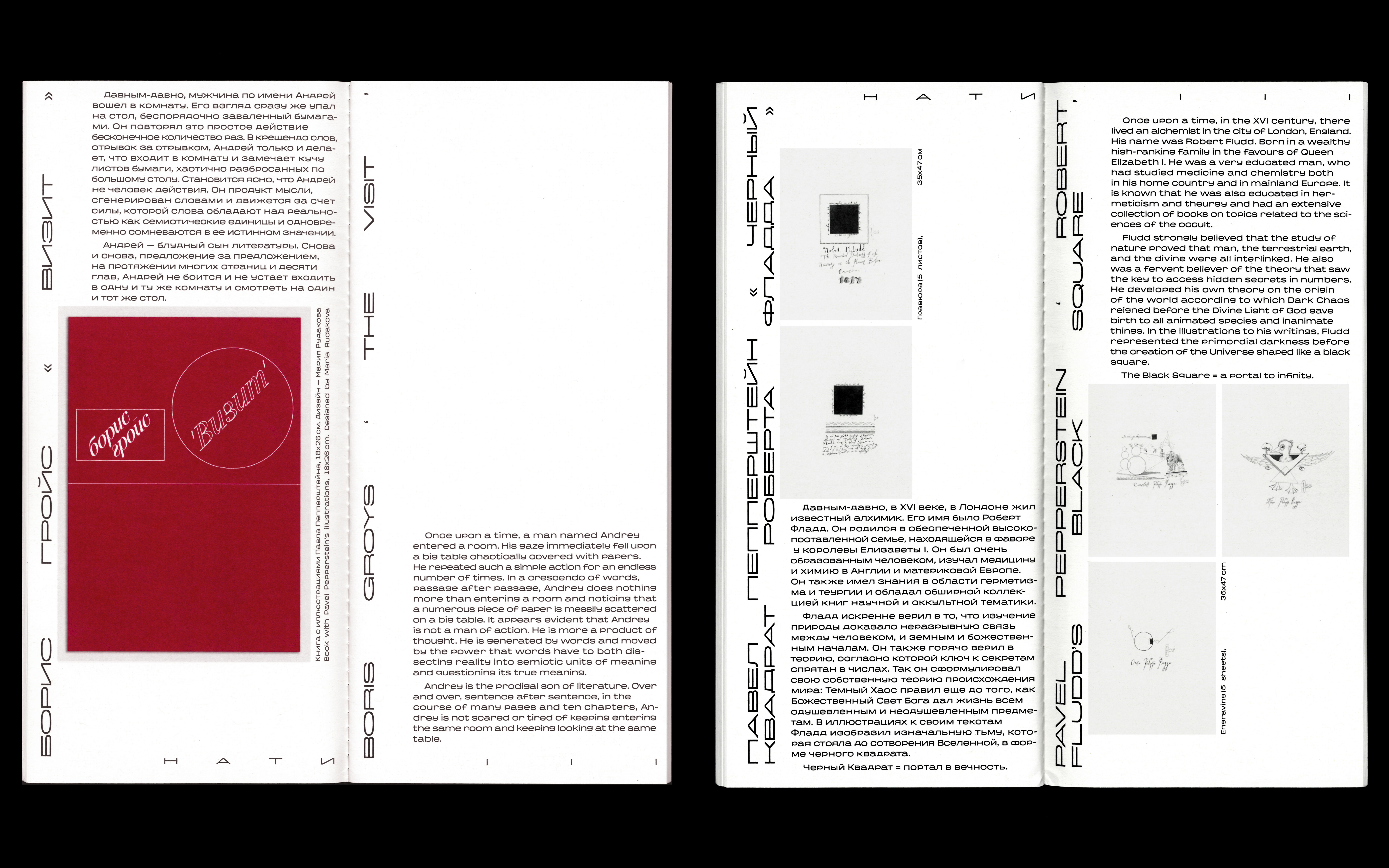 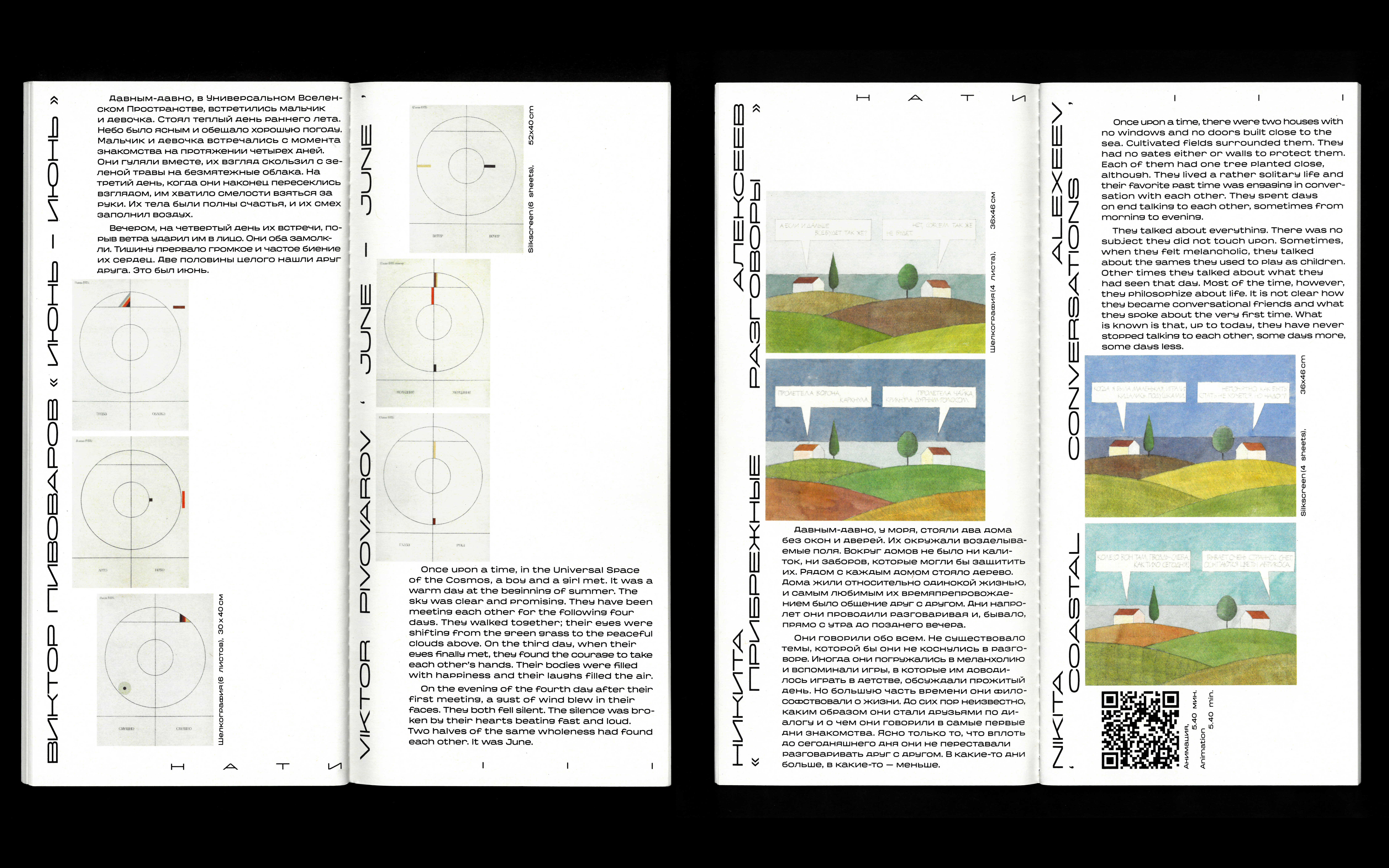 We made Groys’ book especially for the Folder, previously the novel was published without illustration. Visit is a certain meditative absurdist text with constant repetitions. Initially I wanted all the elements of my layout to gradually get smaller proportionally, becoming unreadable, but it was of crucial importance to the publishers that the entire text was easy to read. So, we simplified graphic language and highlighted there is both the title and the name of the author on each page.

Xprmntl 02 works great with illustrations by Pavel Pepperstein which are very graphic and as well as the lots of contrast thickness. 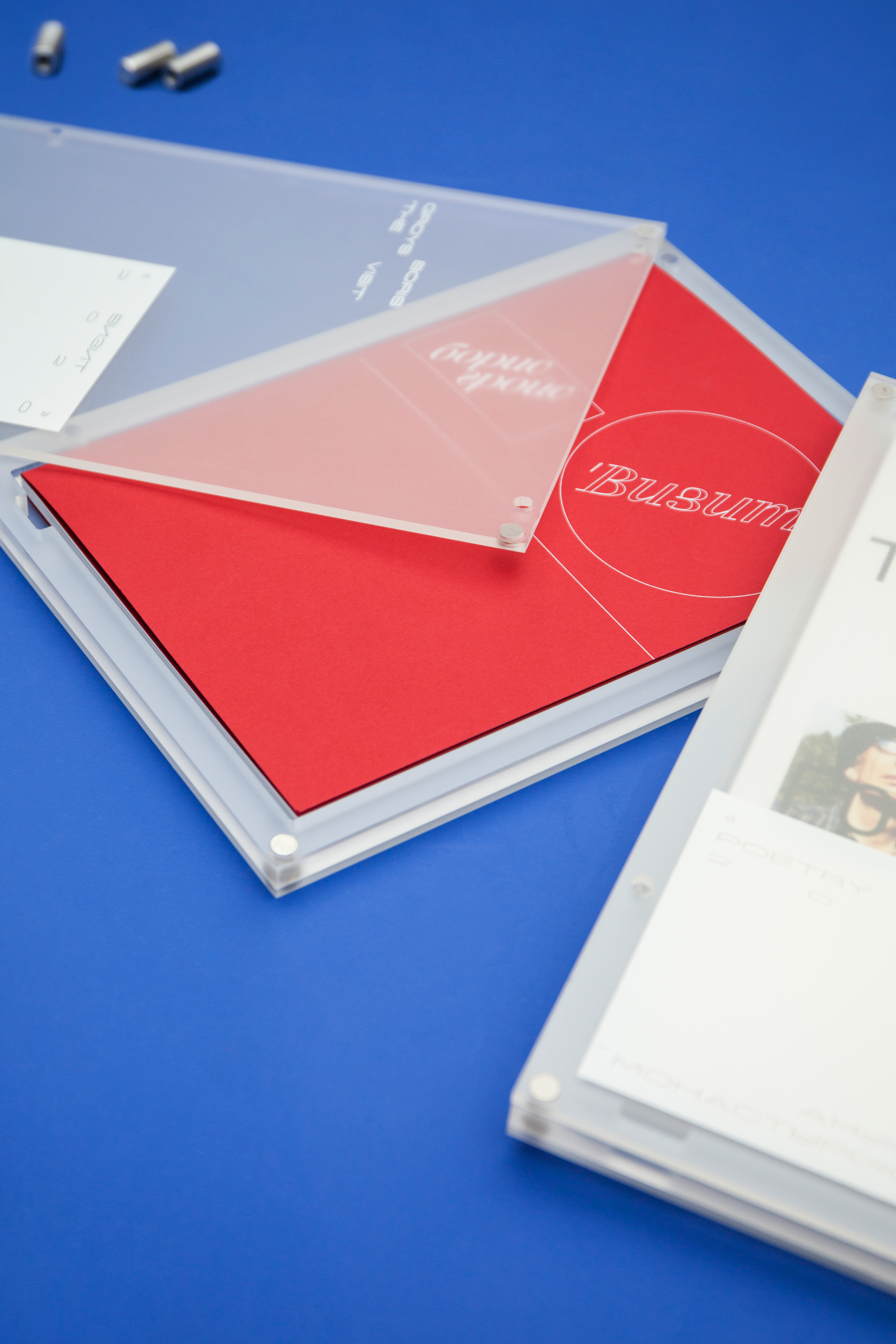 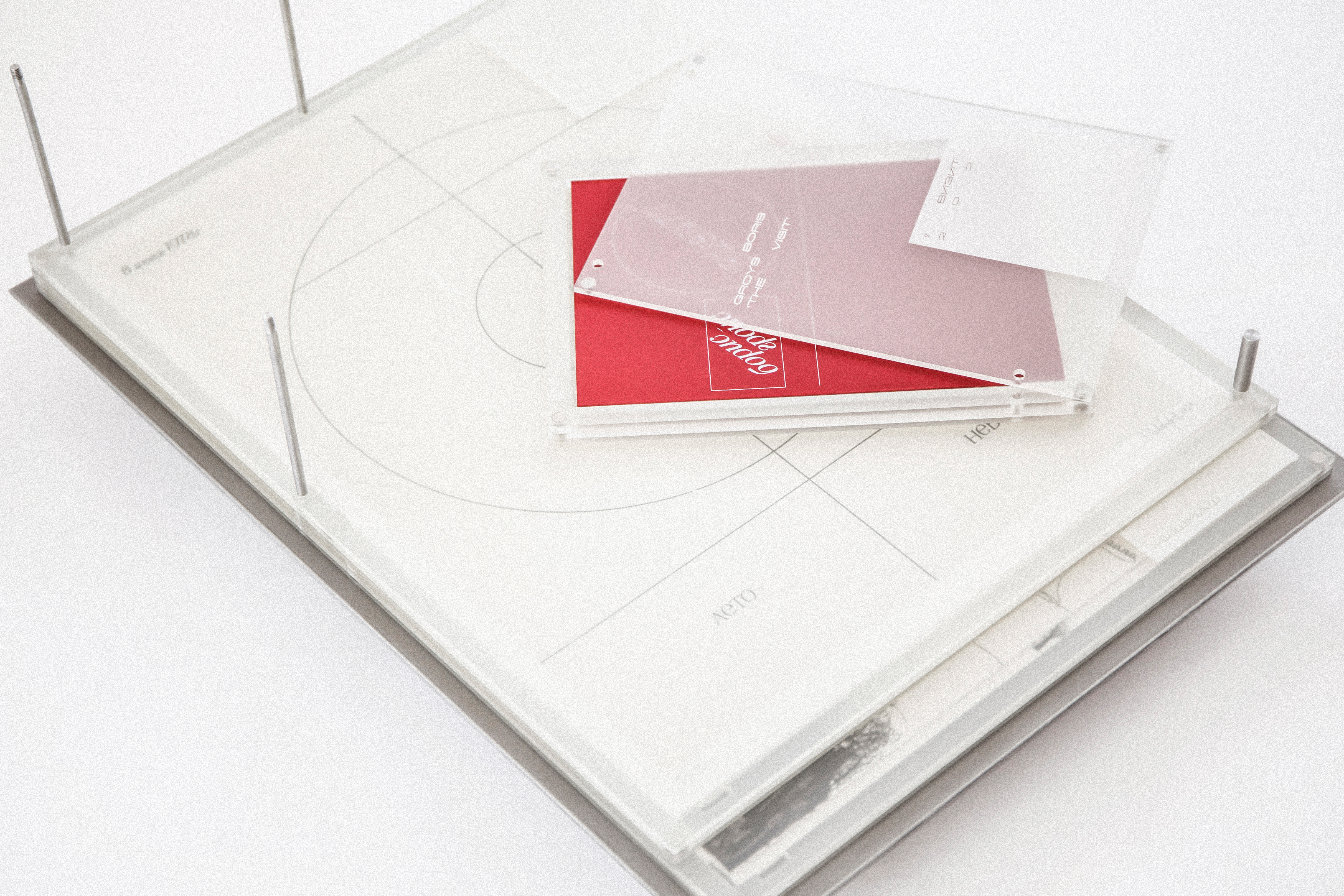 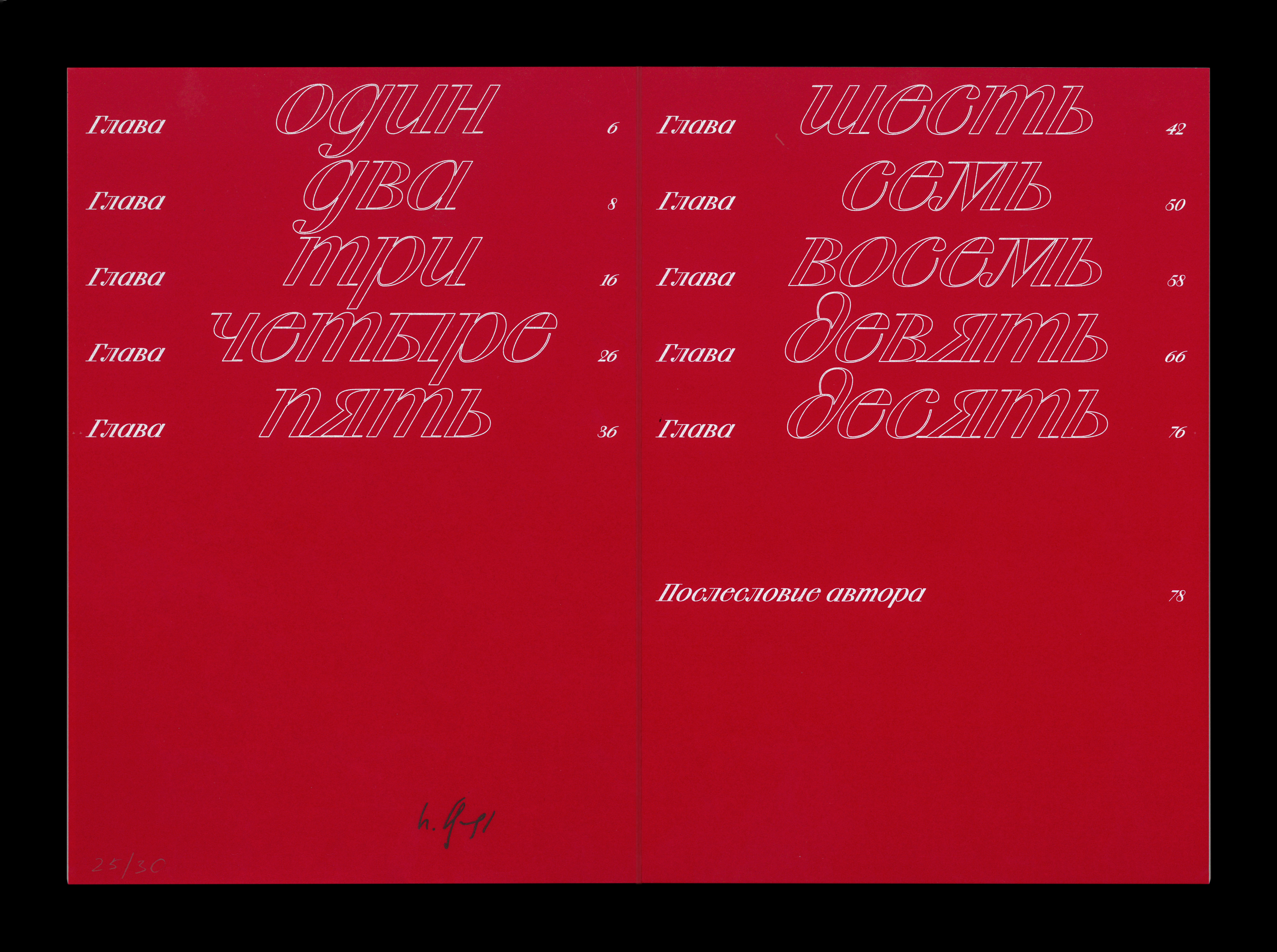 Monastyrsky hasn’t taken part in the work on the book, he was just happy that his texts will be published. He sent us a Word file with his own there were lines through all the text, underlining, spacing, various sizes and headlines highlighted in bold. When I was alone with this text, I found it hard to understand what such design solutions were driven by, but I made a decision to keep it in the layout, turn these intuitive graphic solutions of Monastyrsky into designer decisions. I applied a not too monospaced ASM instead of a regular font, it seems to relate to the samizdat aesthetics, as Monastyrsky was a part of this culture. 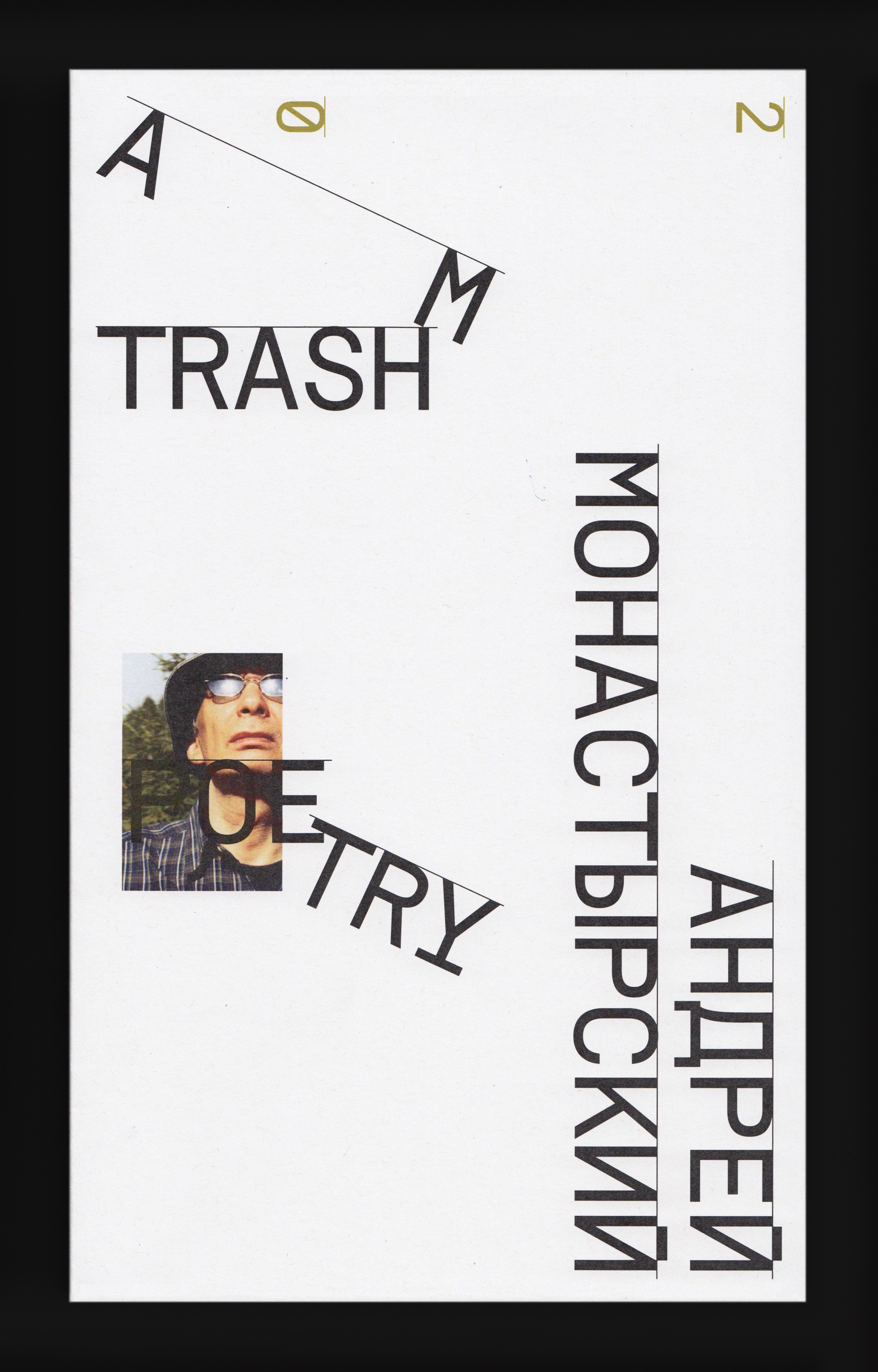 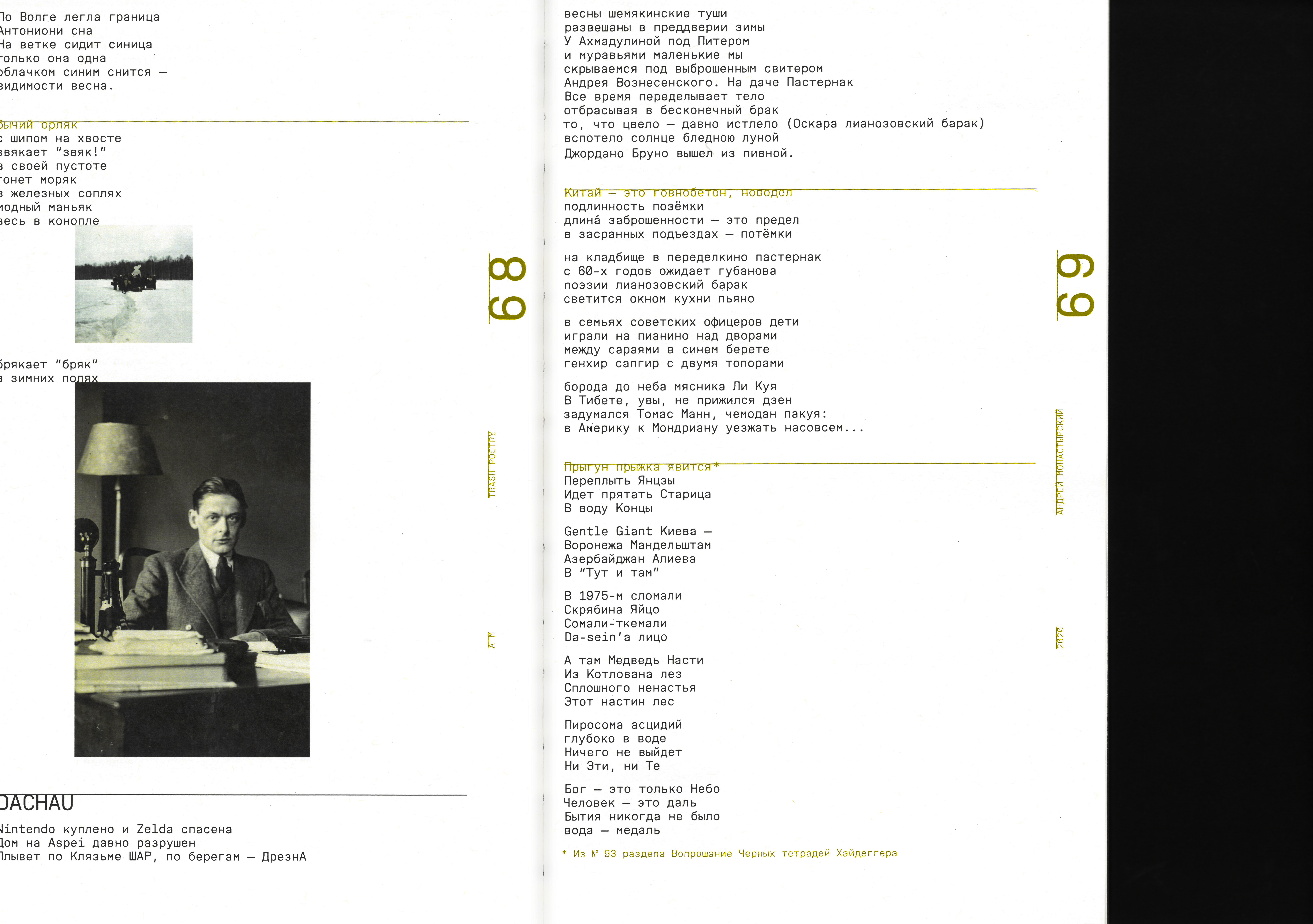 All elements in this project are quite different, but not stylistically — structurally. And this ‘diversity’ eventually became our key value. It is clearly visible in the exhibition space. Each artist is given a standard blue panel, but the way of placing their work and the way the text relates to it is always different. The only things that don’t change are the Metal typeface and justified text. 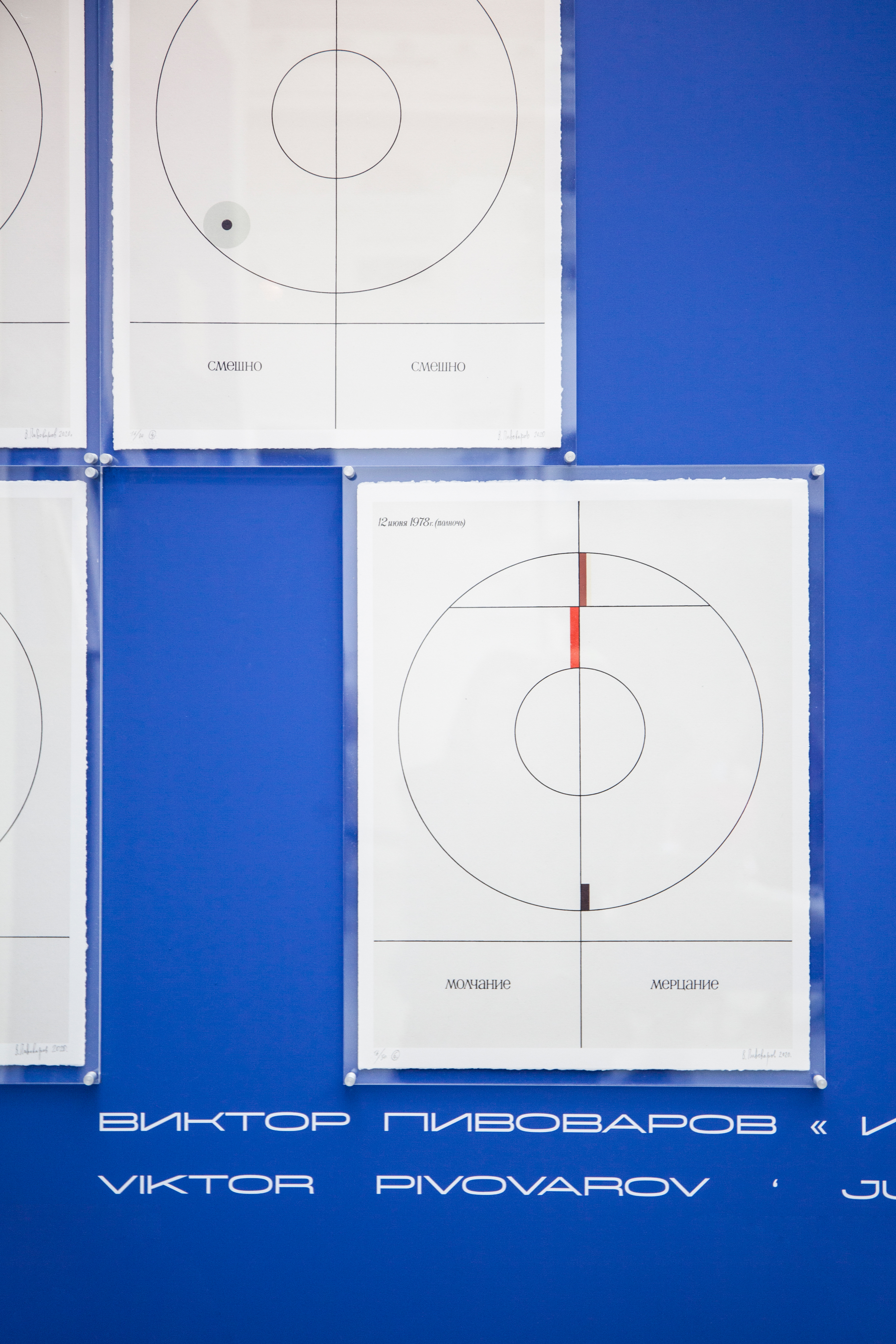 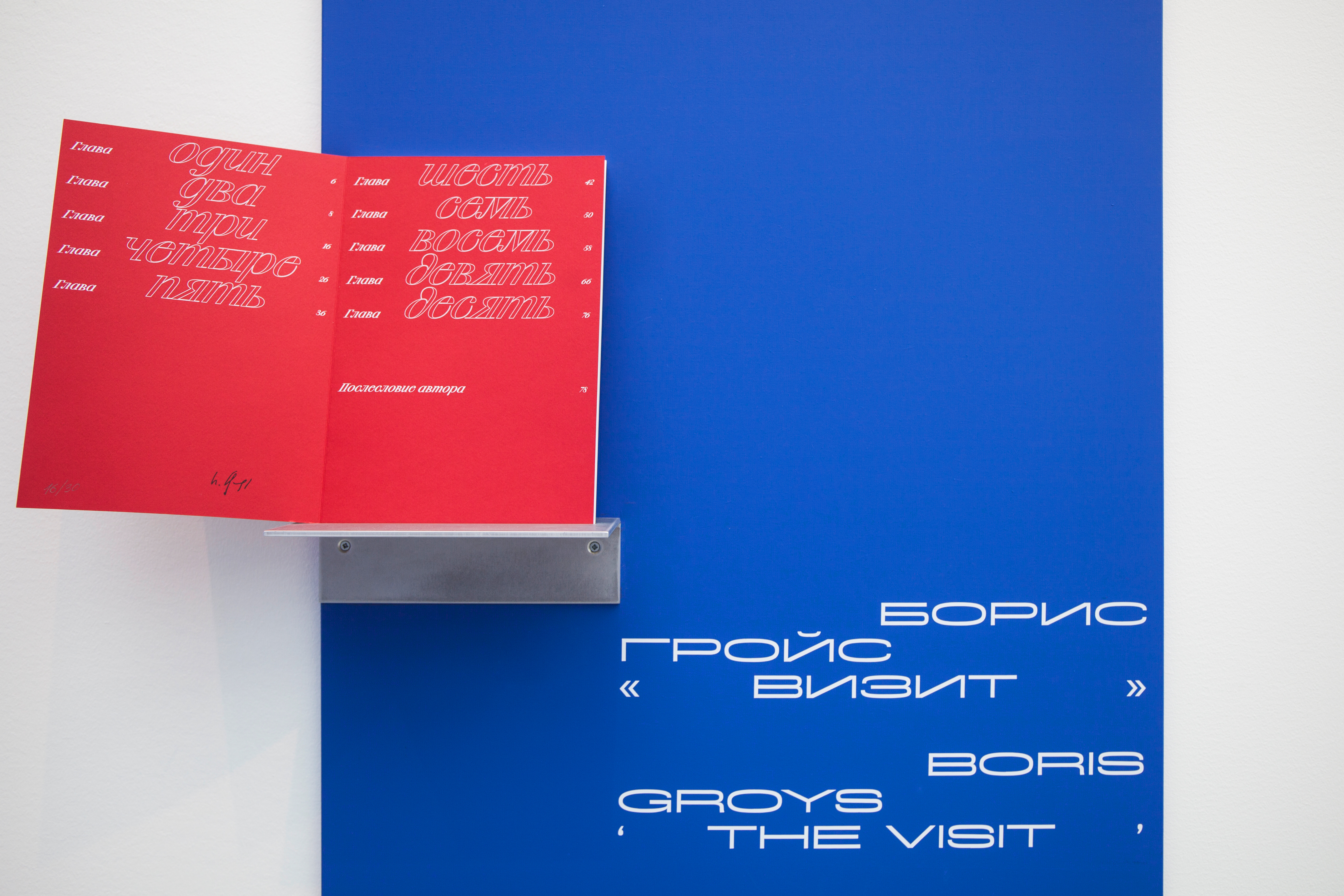 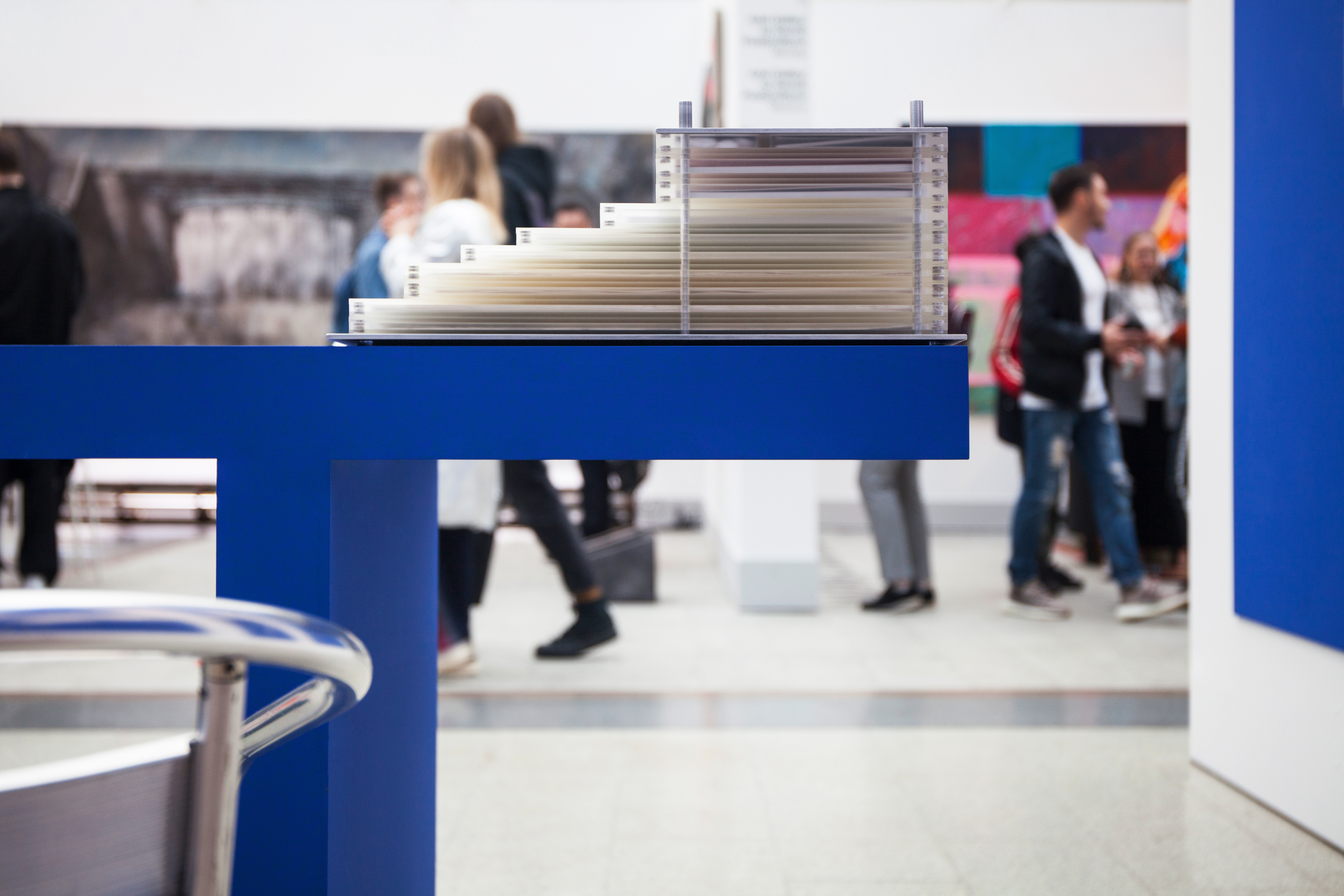 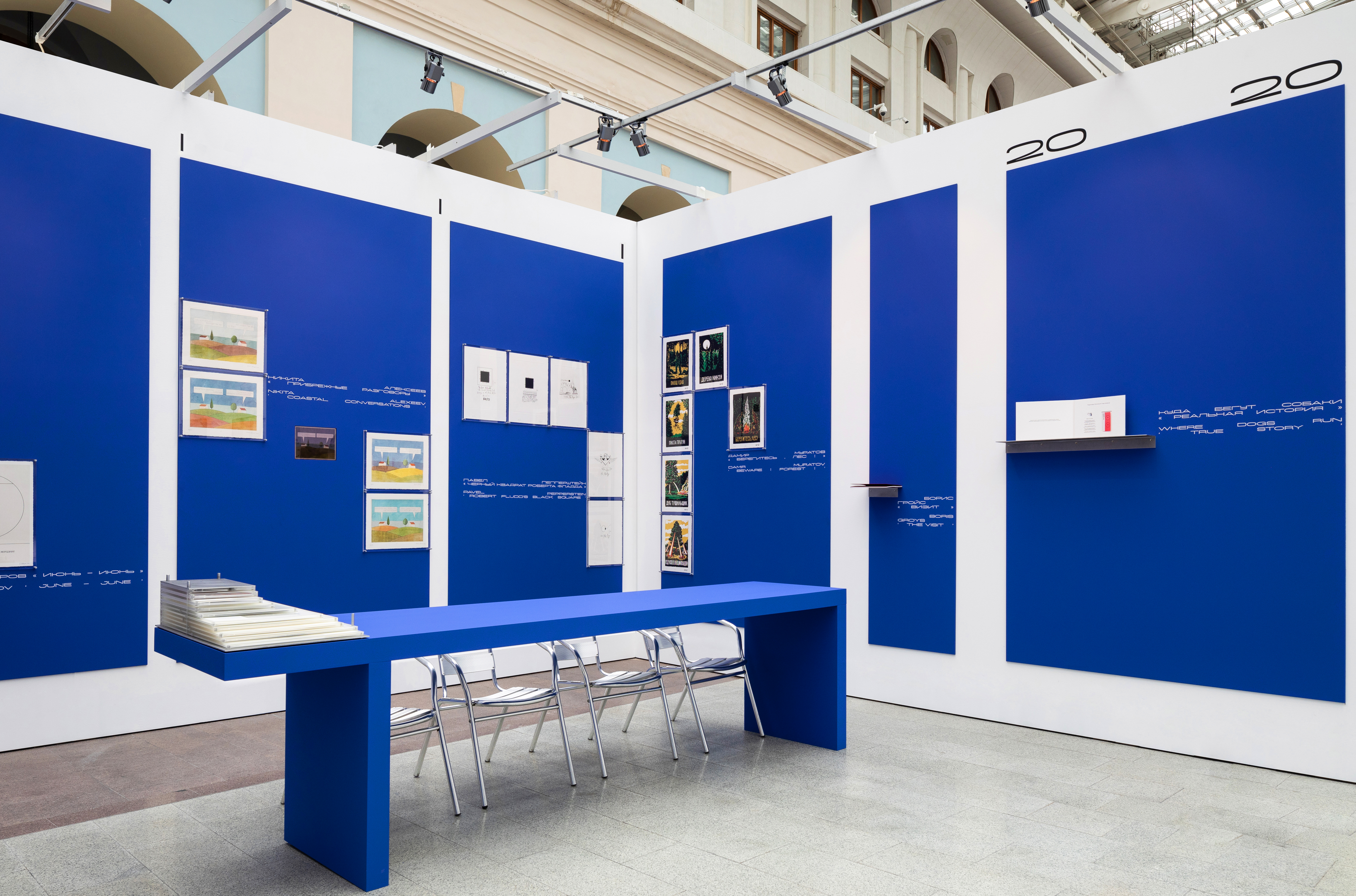 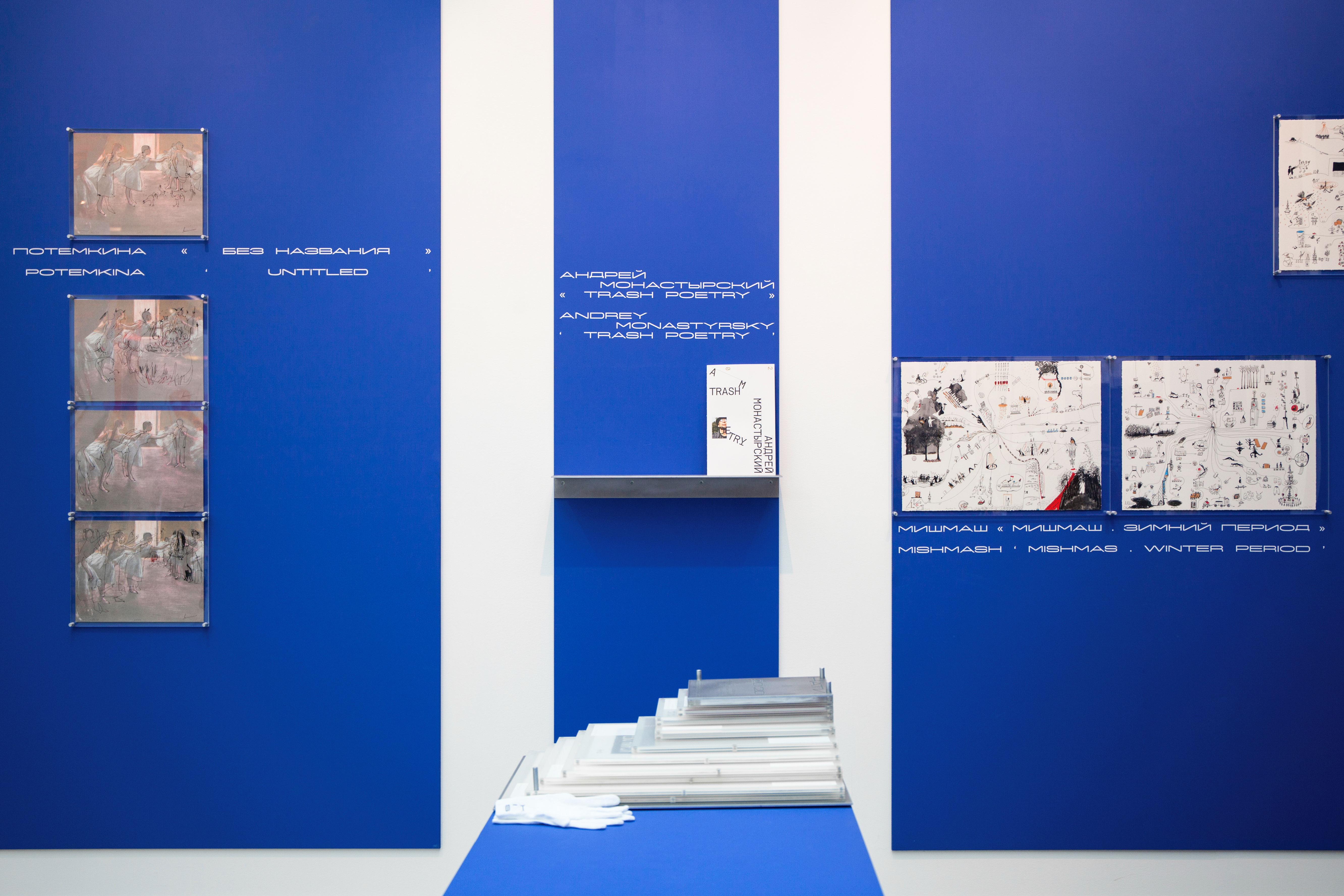 Metal by Pizza Typefaces is something between Brutalism and sci-fi visual culture. The typeface has nine styles varying in width, and short ascenders and descenders enhancing its horizontal character.