Asterisks, crosses, at-marks, copyright symbols; what to call them and how to use them

We continue to look into notable characters of Western typography. Some of them, are often neglected, some cause a lot of confusion, some are typical rather for Latin than for Cyrillic.

Asterisk (from Ancient Greek ἀστερίσκος, “little star”) is a typographical symbol which usually looks like a five- or six-pointed star. Conventionally, an asterisk is six-pointed, although modern typefaces often have five-pointed or even four-pointed asterisks. In texts, an asterisk is used to mark footnotes and editor’s notes, to replace a title withheld, or to censor offensive language and omit unknown words.

An asterisk is utilised in mathematics, computer science, programming and markup languages. In some cases, an asterisk is used instead of a multiplication sign, which is not at hand in most keyboard layouts. An asterisk can denote a birth date. 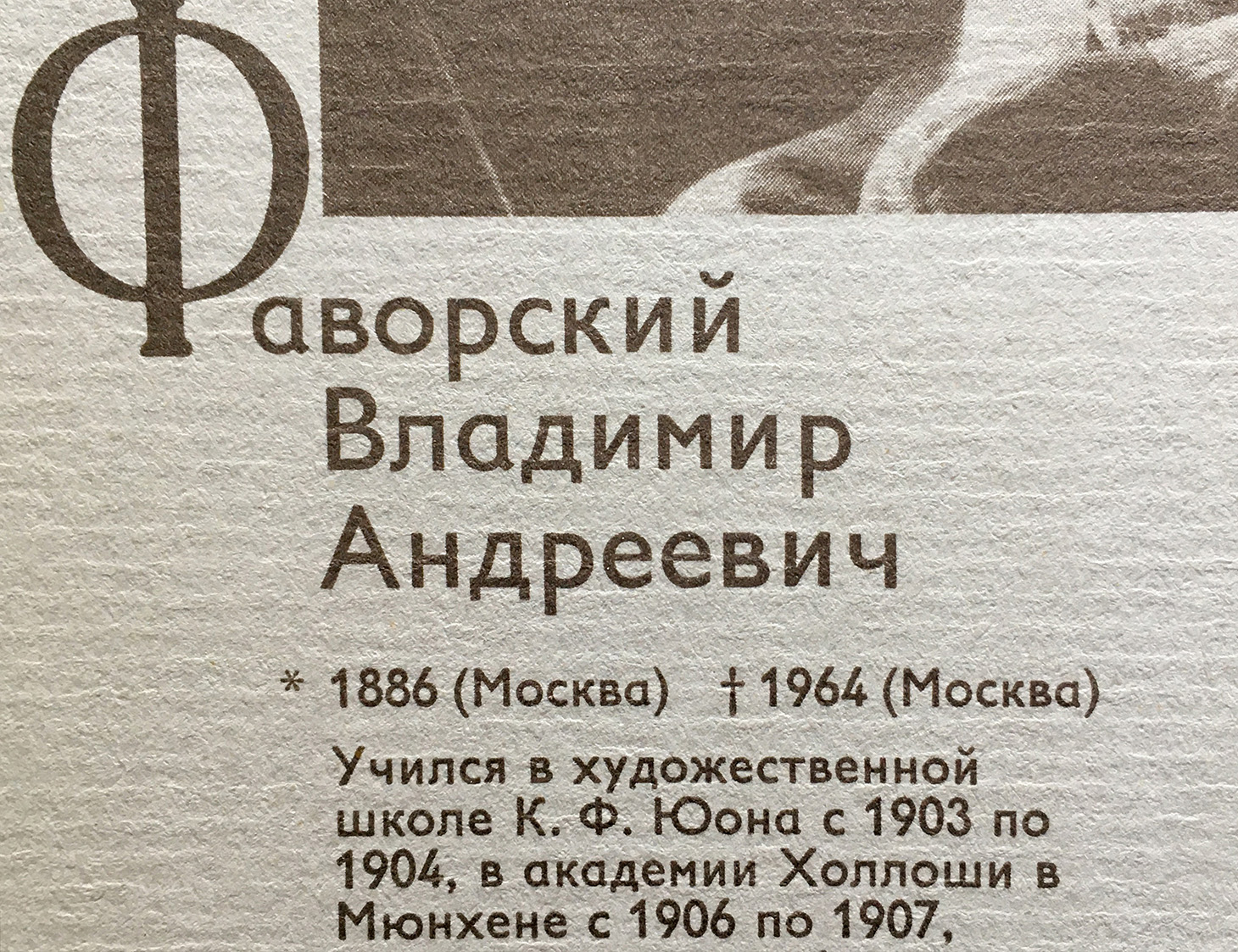 In the book The Lettering Art. Works by Moscow Book Designers, the asterisk indicates the birth year, while the dagger marks the year of death

Some fonts are equipped with an asterism — a symbol consisting of three asterisks placed in a triangle. Asterism was conceived before asterisk and is used instead of a headline before untitled texts. 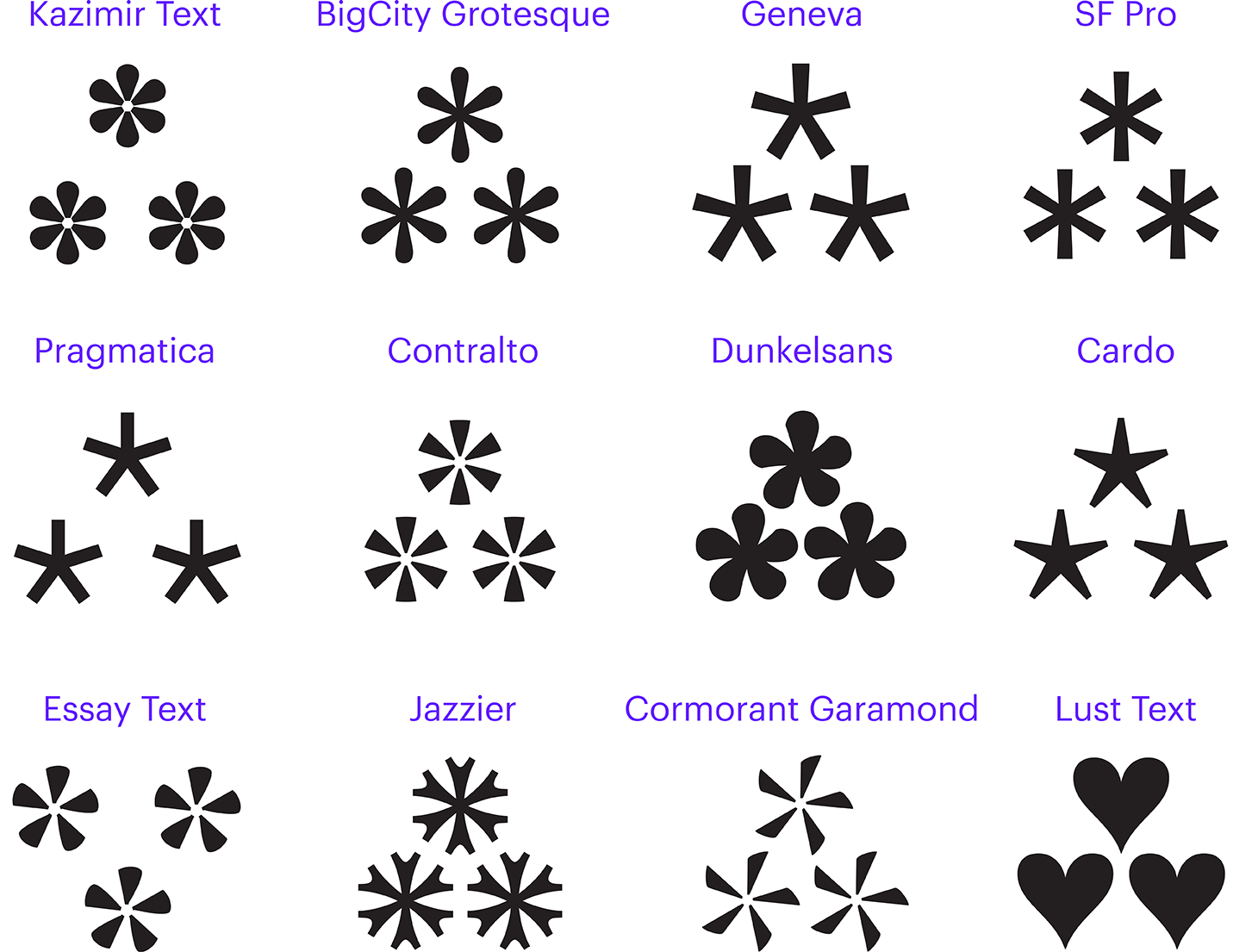 You can also see an asterism as a syntactic construction in modern literature — apart from title and subtitle function, it can be used in long texts to divide logic pauses or flashbacks. In that case, an asterism doesn’t necessarily look like a triangle of asterisks, it is often replaced by other elements: a long border, a line of asterisks, three bullets, a dash, and so on.

Asterisk can be placed before letters or other symbols, or after them. It is considered good manners to kern an asterisk with other glyphs if their pairing creates holes.

Various cases of asterisk usage. Some symbols, such as Д or А, usually require kerning with an asterisk because of their form

The dagger (obelisk, or obelus) is a mark most commonly used in European typography; it is almost never used in Russian tradition. It is utilised as an addition to an asterisk for footnotes, or to indicate the fact or the date of death. The double dagger is used as a footnote marker if an asterisk and a dagger have already been used.

For endnotes, superscript numbers are standard. For footnotes, symbols can be used if the notes are few. (The traditional order is * † ‡ § ‖ ¶· But beyond the asterisk, dagger and double dagger, this order is not familiar to most readers, and never was.) Numbers are more transparent, and their order is much less easy to confuse. Robert Bringhurst The Elements of Typographic Style

The order in footnote usage according to Bringhurst

One wouldn’t see this order in Russian tradition — it’s either two or more asterisks following-up to a single asterisk, or superscript numbers instead of asterisks.

Depending on the typeface design, the dagger can be a simple cross of two perpendicular bars, or a more stylised form.

A dagger indicating the date of death in a Dutch book 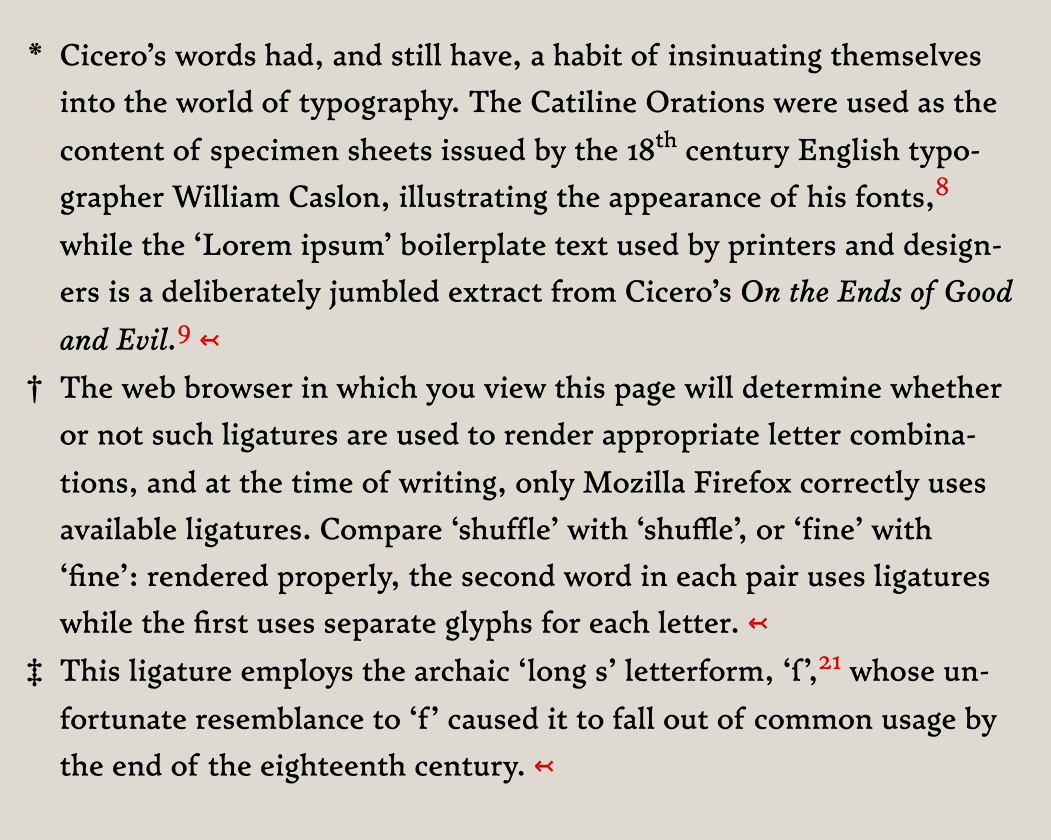 Footnotes on the Shady Characters 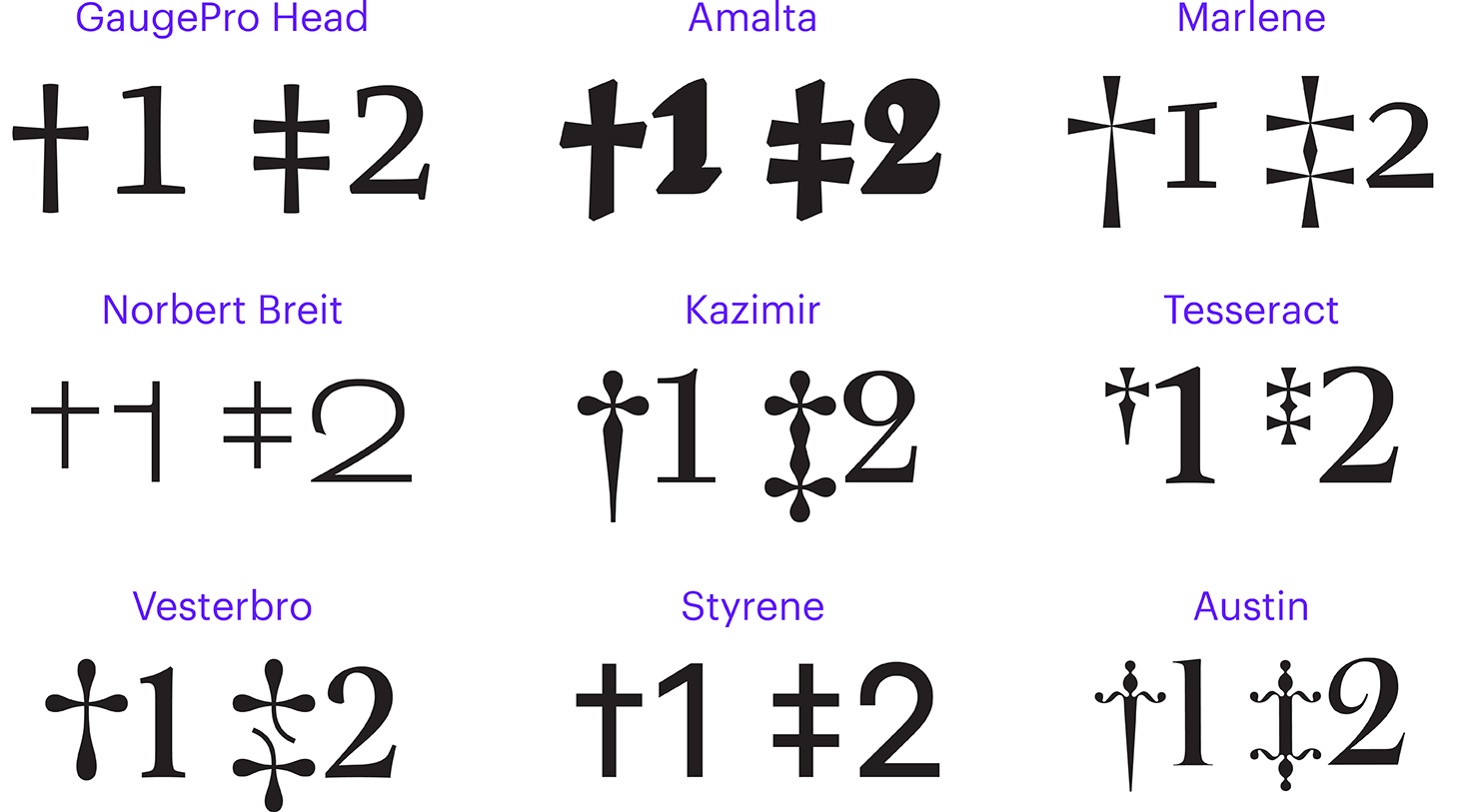 Daggers in the type.today catalogue

A pilcrow is a rather outmoded symbol, previously used to mark the start of a new paragraph — that was before indention was invented. This mark can still be seen in modern typography, sometimes it is used as a separating marker to enliven a typeset. In InDesign, Word, and other word processors, pilcrows denote paragraph breaks if hidden characters are shown. 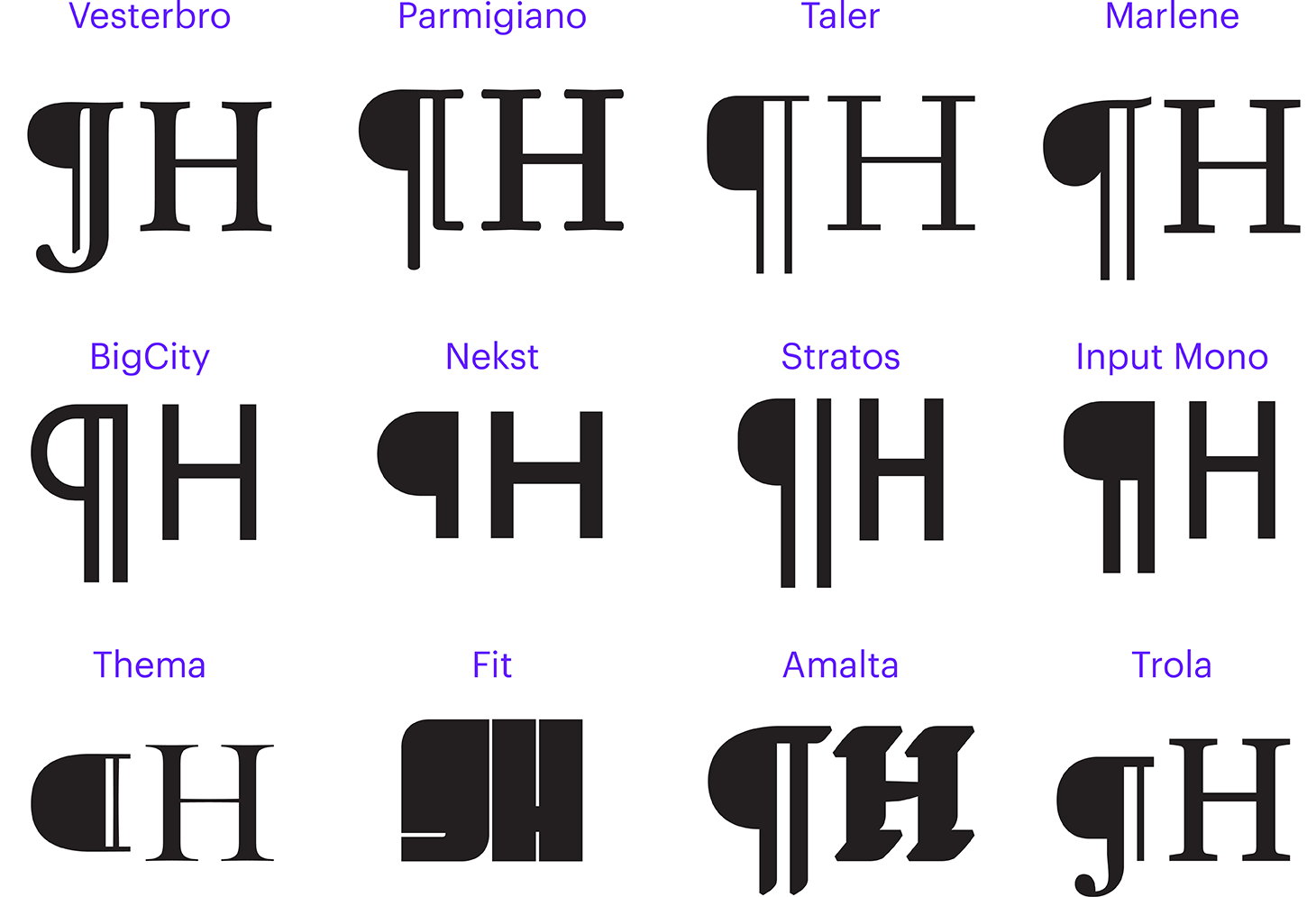 Paragraph marks in the type.today collection 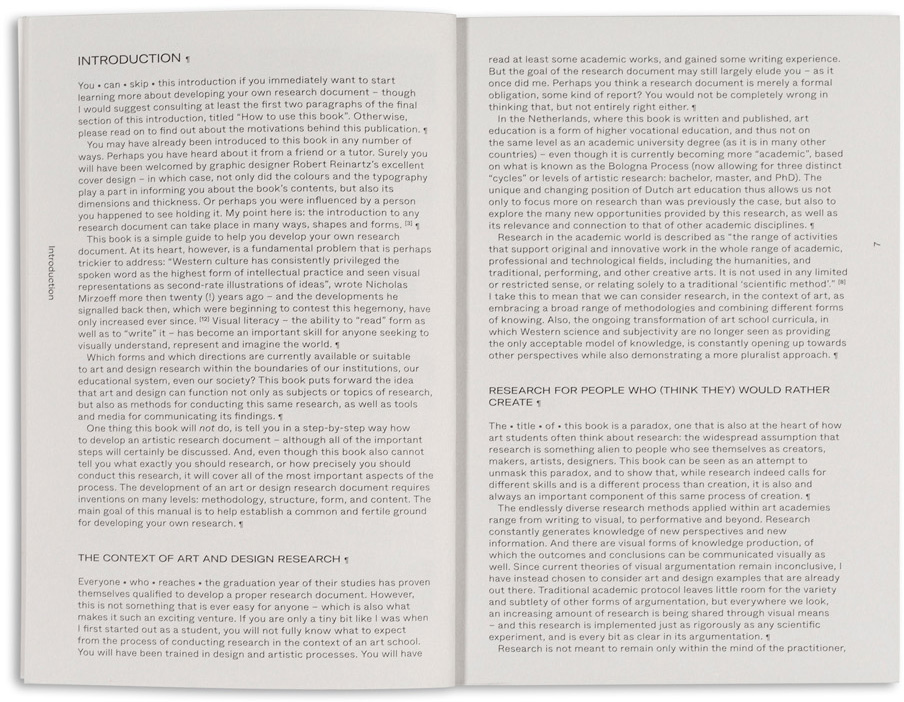 Pilcrows as decorative elements. Dirk Vis, Research For People Who (Think They) Would Rather Create

The section sign is a character for referencing (individually numbered) sections of a text, mostly in legal documents or textbooks. It is often accompanied with a pilcrow and numbers. 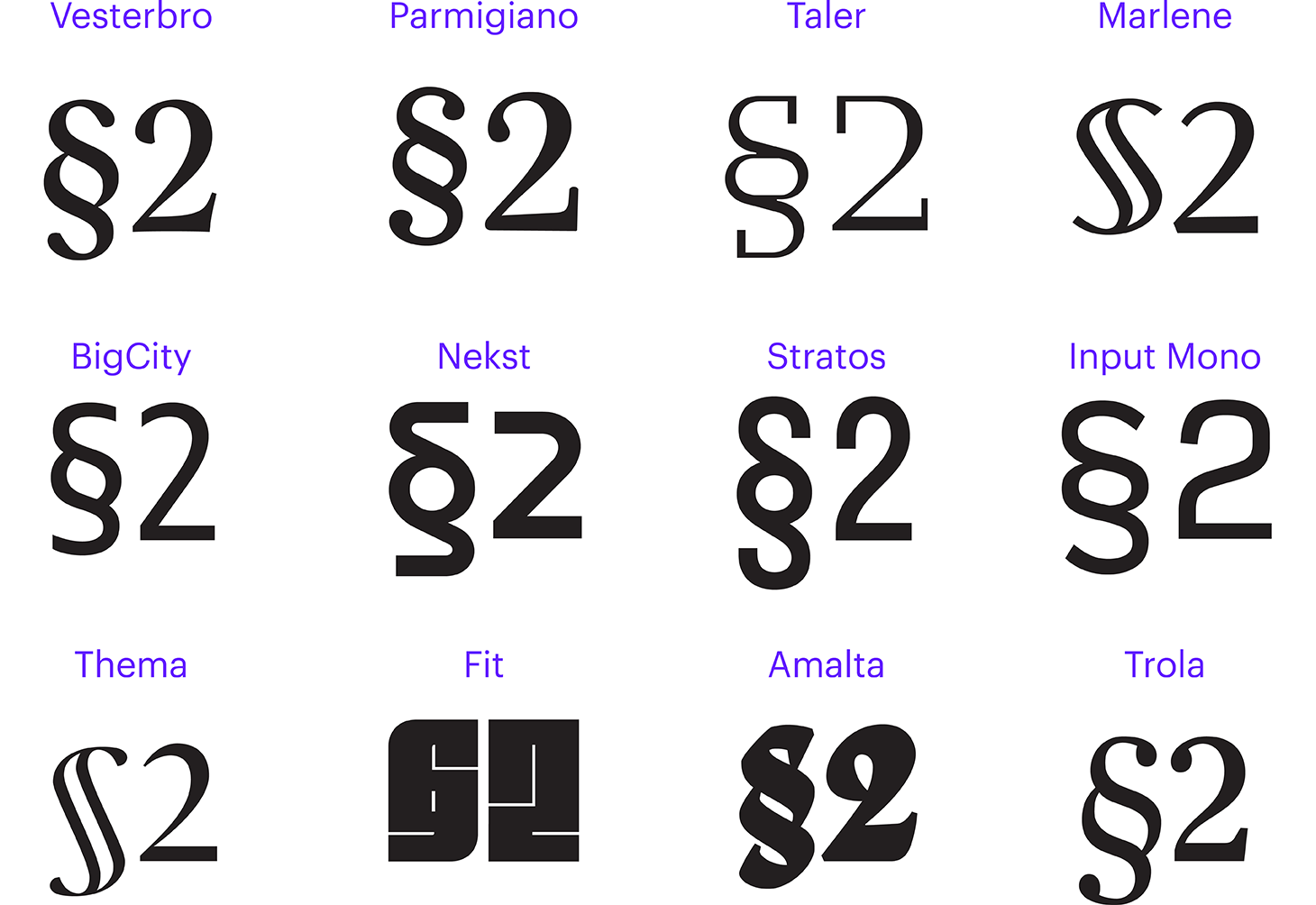 Section signs in the type.today collection

Copyright symbol denotes content with legally protected authorship. Depending on the country, the symbol itself may or may not have legal power: under the Berne Convention signed in 1886, the presumption of authorship is valid in most nations, therefore a copyright sign is technically unnecessary. However, this symbol might remind of an author’s rights, copyright.

The Western tradition uses the copyright symbol before the year, while the Russian tradition puts it before the name of the author

Despite various usage practices, the copyright sign is typically placed either before numbers or before an uppercase letter, which is why it should be placed on the baseline and be as tall as the uppercase letters.

There is no rules regarding spacing the symbol either. Here’s what Matthew Butterick argues:

Must you put a word space after the copyright symbol? No, but it makes good sense semantically. The © directly replaces the word copyright, so it should be spaced like any other word. Trademark symbols, on the other hand, are more like little barnacles of legalese—immovable but mostly ignored. To think of it another way, if you were reading aloud the phrase “© 2021 MegaCorp™”, you’d likely pronounce the © but not the ™. Matthew Butterick Butterick’s Practical Typography 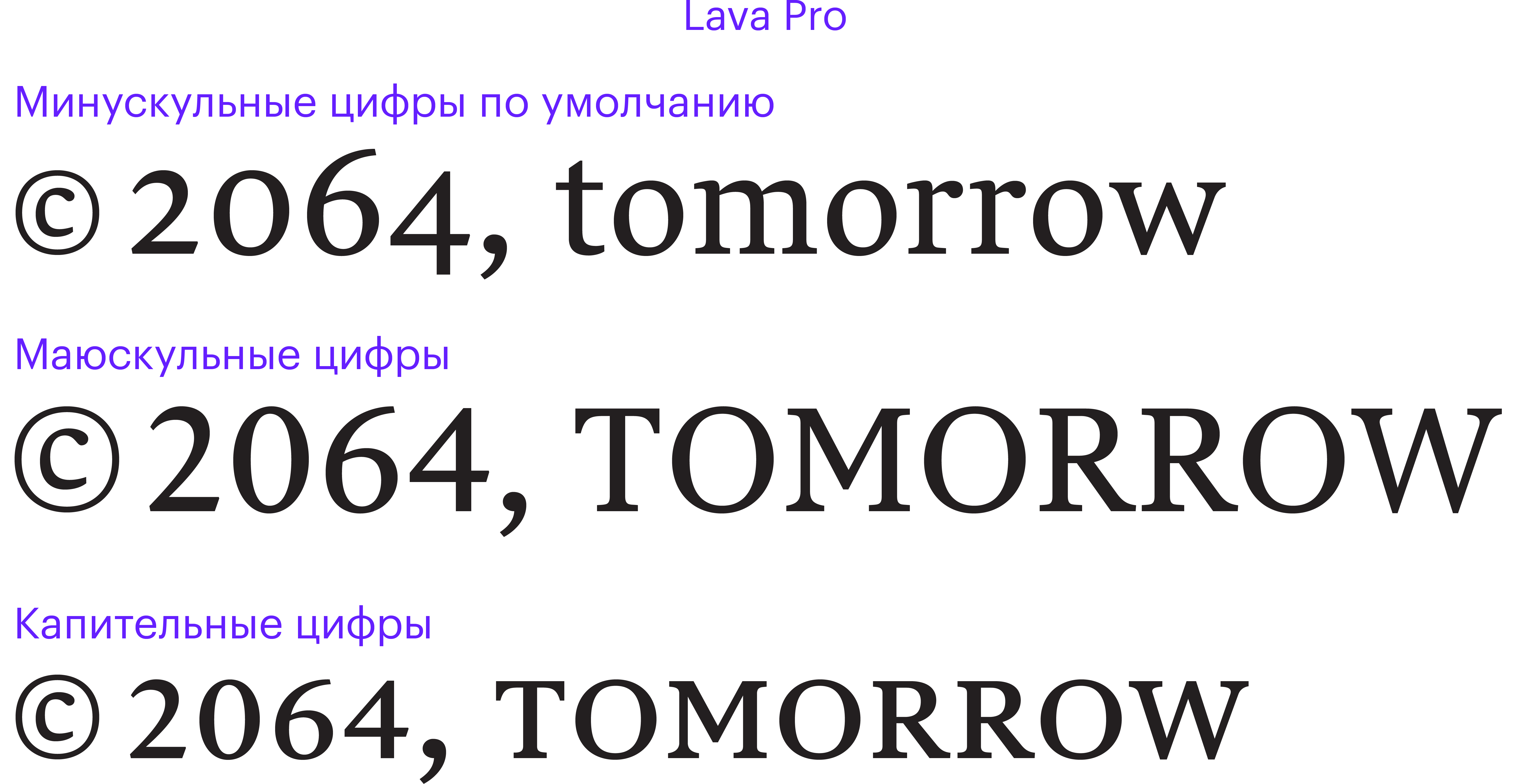 In Lava, the copyright symbol is levelled up when lining figures are toggled, and stays low when OpenType small caps are toggled

There is also a separate sound recording copyright symbol. Its form follows the same principle: a circled uppercase P (for Phonogram), with no other characters involved (including the lowercase p.) The phonogram symbol glyph is much less common than the general copyright one — mind that while choosing a typeface to be used for music business purposes.

The trademark symbol has a similar meaning to the registered trademark symbol, but is not legally valid in Russia. In countries where this symbol is protected by law, it indicates that a trademark registration (®) application has been submitted.

Graphically, ®™ are more in line with each other than anything else (for, example the copyright symbol): usually, they are of the same weight and vertical position.

Since these symbols typically go with a brand name, normally need no spacing. Kerning them is also mostly unnecessary, but manual spacing may be required if they appear too close to the name or too far from it.

The commercial at (“dog” in spoken Russian, “ape’s tail” in Polish, German and Dutch, “snail” in Italian) is a sign best known as one used in the email address.

The symbol goes back at least to Middle Ages; it was used to denote various measurement units: like amphora (Greek-Roman unit of volume) or arroba (Iberian unit of weight). Later, it began standing for “at the rate of” (“at the price of”).

The @ experienced a revival and got its contemporary meaning in the 1960s, thanks to Ray Tomlinson, engineer with BBN Technologies, who invented electronic mail as we know it today. Tomlinson used the sign to separate the message recipient from its sender.

Lately, the commercial at has been widely used to tag users on social media. Besides, it is utilised in various programming languages.

When choosing typeface for UI or web design needs, check the design of this symbol: sometimes it happens to be very different from alphabet signs in terms of location and contrast.

In early digitised fonts, the loop’s lower end sits on the baseline and the sign appears too high among lowercase letters. Depending on the typeface design and idea, the commercial at may match the rest of the glyph set in terms of contrast, or be very different to it.

In 20-something-year-old fonts (some of them are system in macOS) the commercial at is placed too high. Most likely, it was designed to match uppercase letters

In contemporary system fonts, the @’s vertical position matches lowercase letters, and it does not feel elevated

Today, the commercial at is made case-sensitive more and more often — by default, it is designed to work with lowercase, but lifts when All Caps is toggled.

To activate the uppercase @ in Gauge Pro, toggle the All Caps mode — it can be activated in different ways, depending on the software

The ampersand is a historical ligature originating from the Latin “et” (and). It is used instead of cumulative conjunctions in English.

The ampersand is commonly used in brand names, titles, abbreviations and listings; using the ampersand within running text is connsidered low style.

The ampersand is usually spaced out with thin spaces, but in some typefaces, spaces of different types are required. The ampersand is never spaced if used in abbreviations.

The German typographer Friedrich Forssman recommends moving the ampersand to a following line in case of a line break, although there is no single standard regarding this issue (unlike, for example, line breaks when it comes to conjunctions in Russian tradition).

Many type designers design multiple ampersands for a single font, which is why we recommend checking the glyph palette for various versions of this symbol. In a small-caps setting, a small-caps version of the ampersand should be used.

Alternate ampersand glyphs — normally those are hidden within stylistic sets

Ampersand can have a different form in italics

The fleuron (from Old French “floron”, flower) is a decorative sign in the form of flowers, leaves, shamrocks or rosettes; it can be vertical or horizontal. The fleuron was introduced in the early 16th century and became one of the most popular decorative elements in the Renaissance. Both its size and design varied — sometimes the fleuron was cut according to the typeface size and was only about 3 mm high, while in other cases it was a part of a separate decorative set.

The fleuron is rarely present in contemporary fonts, but it might be used to enliven a typeset — for example, instead of list bullets. 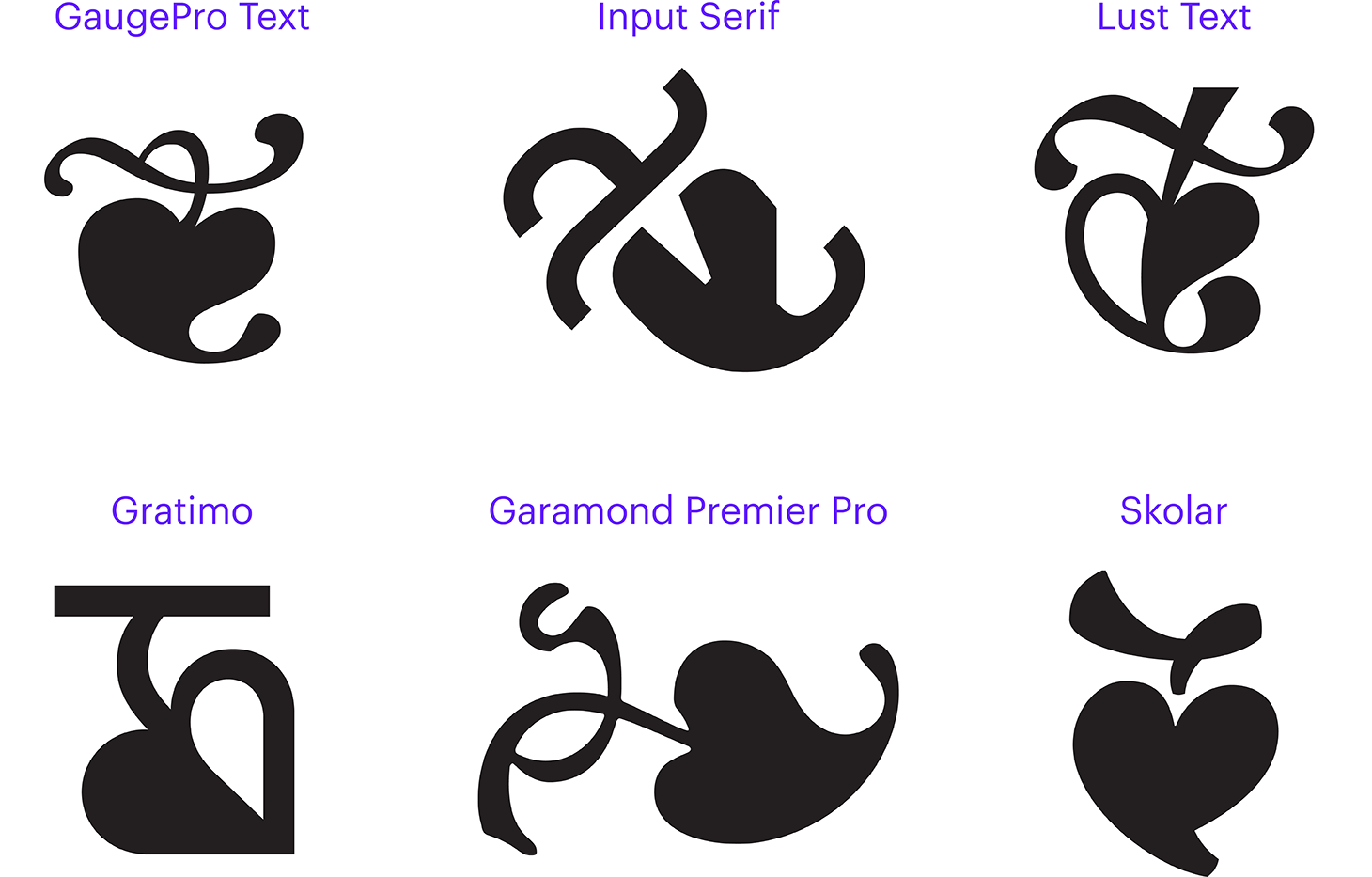 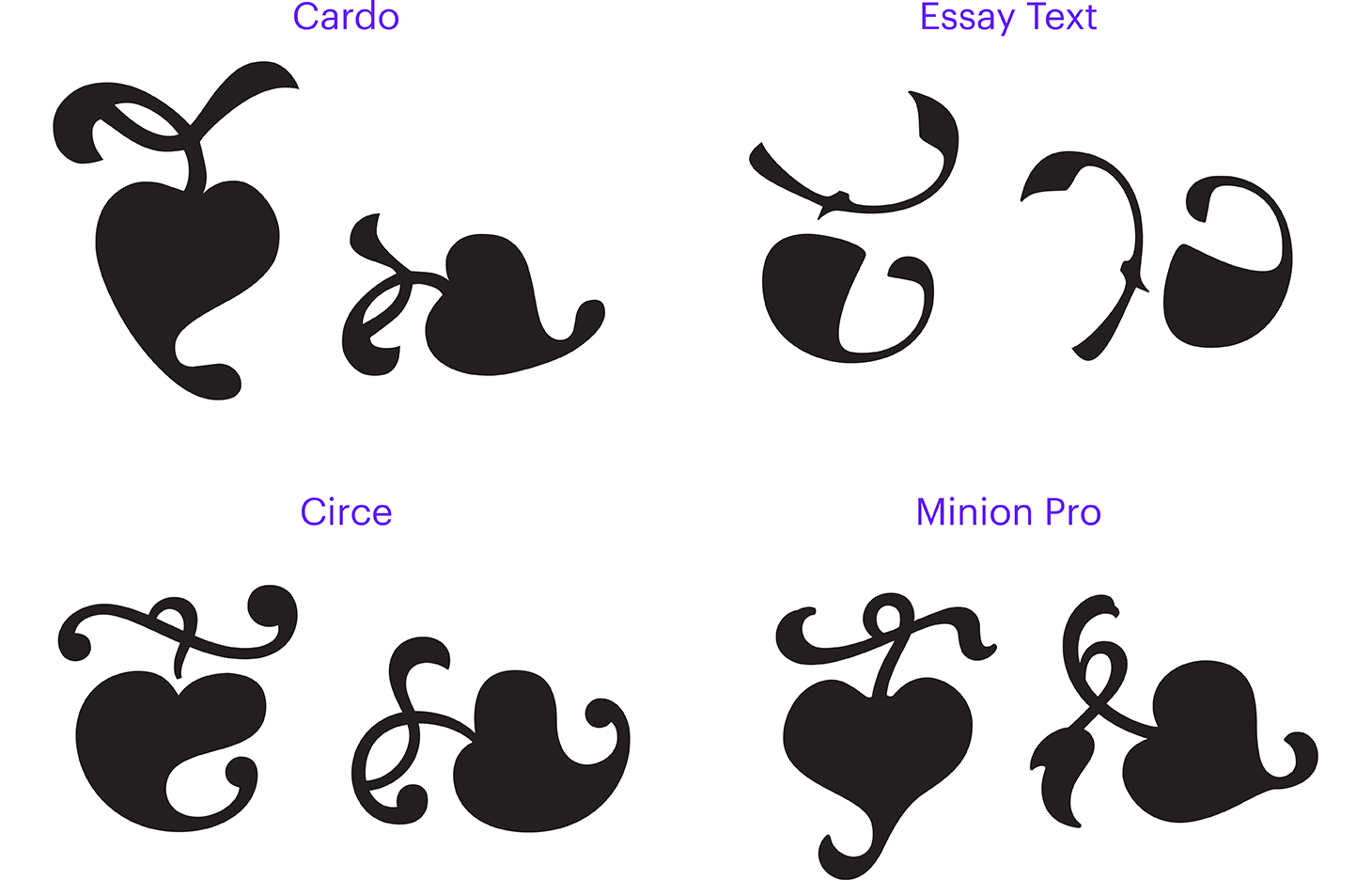 The index, or manicule, is a pointing hand symbol. Initially, manicules were drawn in manuscripts and early printed books to draw attention to a certain part of text. In the 19th century, the index was adopted in posters—they were used in large, display typography, again, for highlighting. Manicules as a glyph in a font are quite rare today, though they are ubiquitous in form of emoji or a cursor for hovering over a hyperlink.

If a type designer made a manicule glyph which works well with the rest of the set, it can be used both for decoration or as a navigation element. 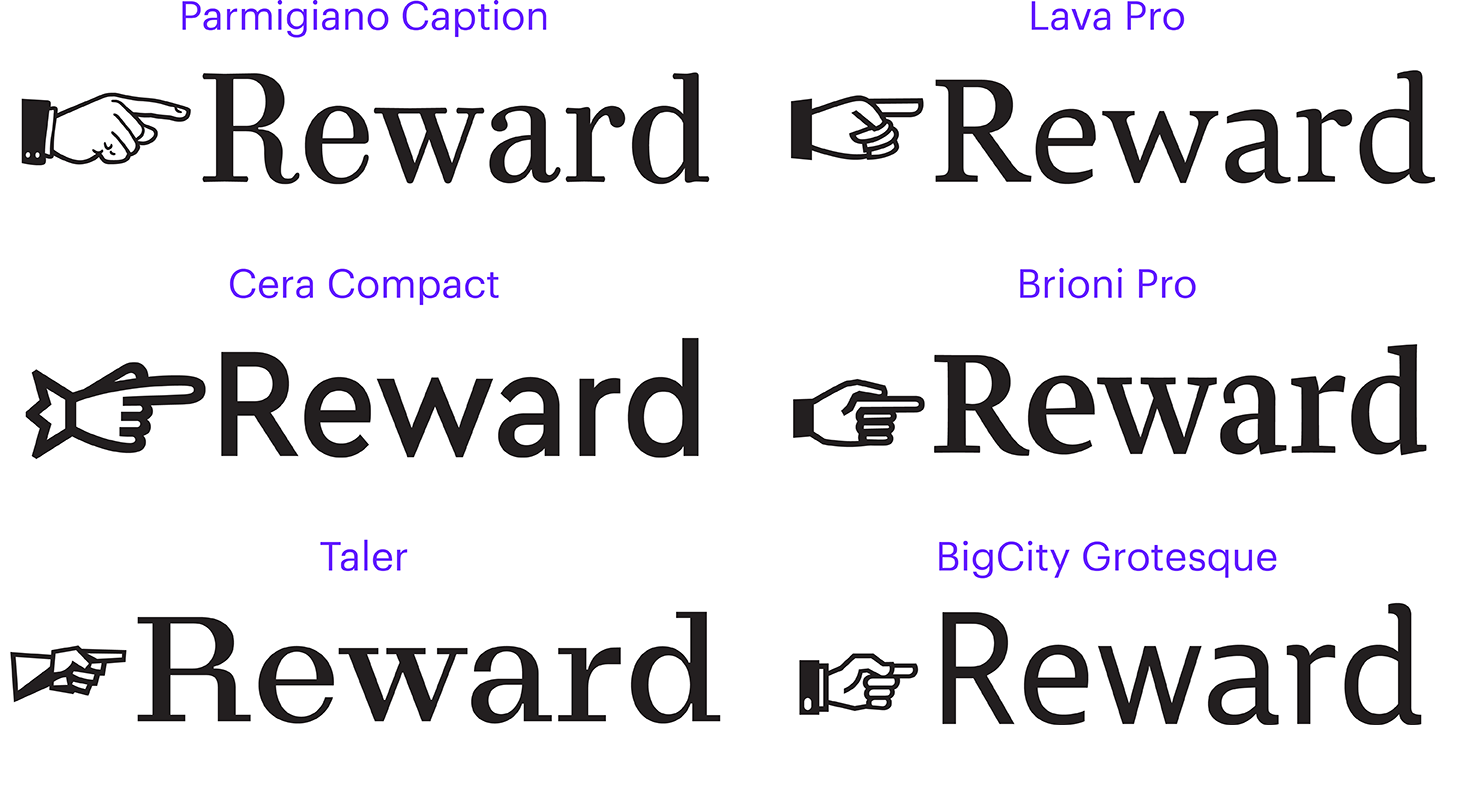 Indexes in the type.today collection 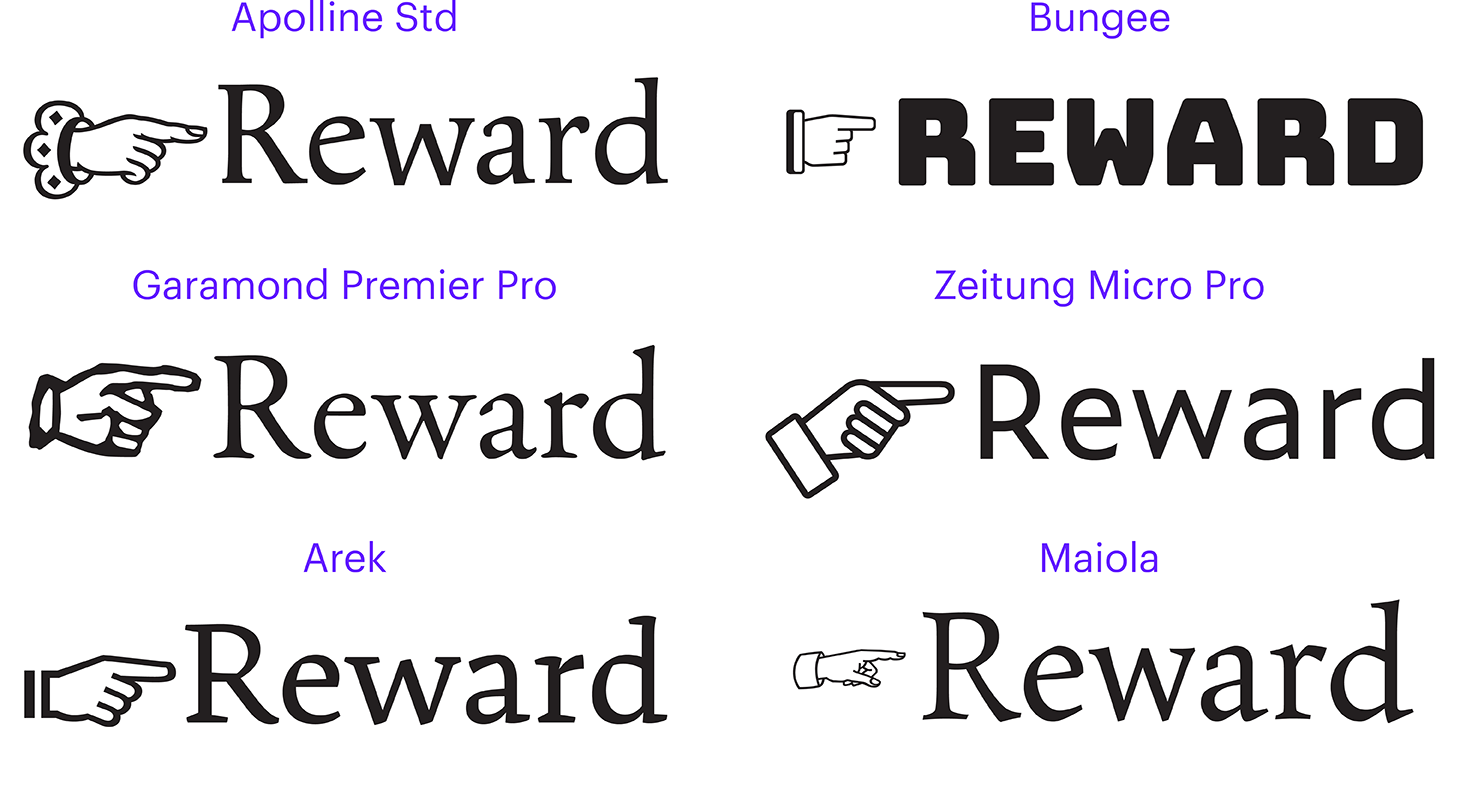 Indexes in the Adobe Fonts collection