Conversation of founders of type.today Ilya Ruderman and Yury Ostromentsky about todayness in type design and typography.

Conversation of founders of type.today Ilya Ruderman and Yury Ostromentsky about todayness in type design and typography.

Ilya Ruderman: Sometimes that’s exactly how it is. It’s an intuitive, emotional experience. I really can feel what year it is, and tell you precisely that a particular typeface might be two or three years old, whereas another one is totally fresh and reflects the present day.

As a rule, I note the extent of its simplicity, how minimalistic the underlying graphical idea is. For some reason, a decade ago, typefaces were characterized by verbosity, by visual complexity.

YO: So is the “antiqua” style a thing of the past?

IR: That’s not it. What’s important is how simply the contours are devised. I think that it’s the simplicity of how the visual idea is conveyed that is the sign of a modern typeface.

We’re [also] living in a fantastical era of eclecticism. For example, I’m drawing a baroque typeface and suddenly I add something that’s characteristic of the present day. It’s like a collision of enormous continental plates, in which one era gives you, for example, all the stresses of contrast, the style, the structural mechanics, the skeleton, while from the other you get a whole other set of parameters, such as, for example, low contrast.

What you get is something like, for example, Bodoni Egyptian by Nick Shinn or Parmigiano by Typotheque. 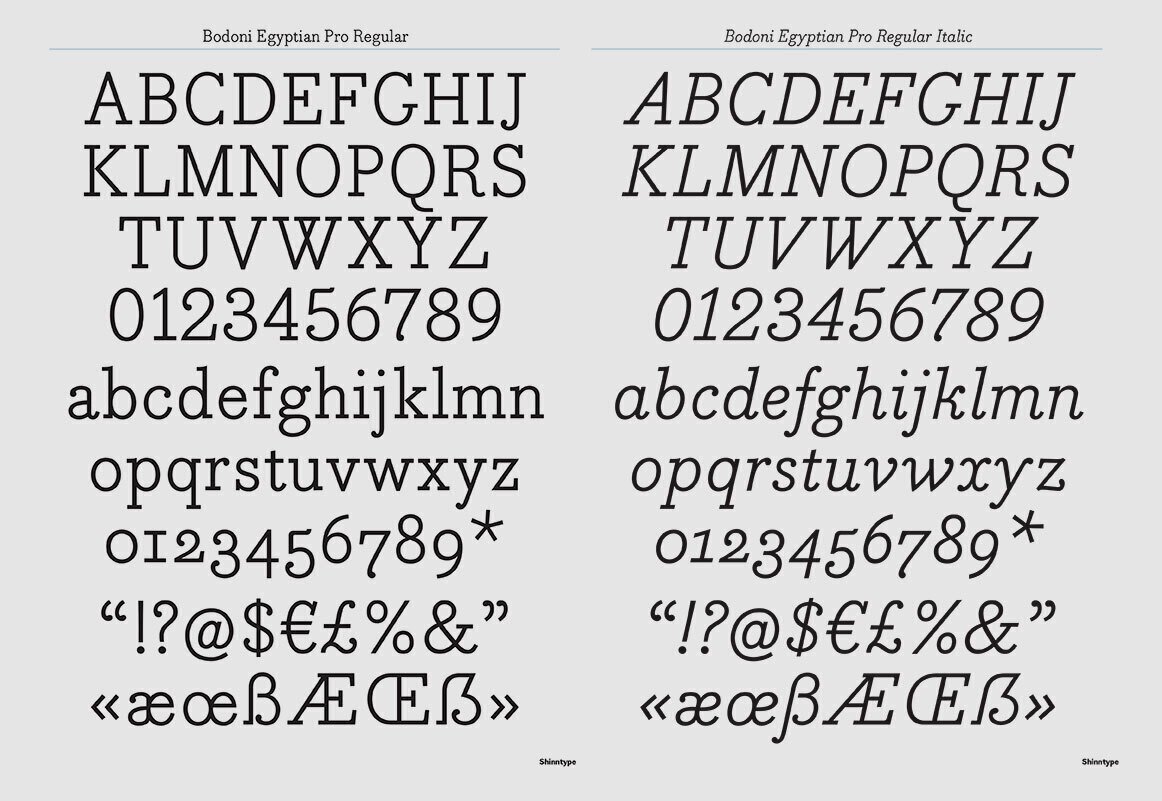 YO: So what’s important is what’s added to the previous era. You mentioned low contrast. What else?

IR: Not only what, but also why. Recently Hoefler released their Operator typeface. This is a monospaced sans serif type, but it’s meant for programming. It’s really pleasant to write code with it. But, on the other hand, its italics are based on typewritten prototypes, but it’s absolutely insane, in some other places it’s reminiscent of handwriting, on that kind of connectivity. It becomes a mixture of rather strange features and produces a very strange result. And this, it seems to me, is another important trend that’s characteristic of modern typefaces – an element of folly, of a certain insanity.

Before, in order for your typeface to be remembered, to make it stand out, you would use certain tricks. For example, let’s say you’re drawing some kind of geometric sans serif typeface, something like Futura. You draw and you draw and then, suddenly, you take some glyph, let’s say the letter “S,” and you do something really different with it, something special. You’re still following the principles of a geometric sans serif, but jazzier, so to say. And then you say: “My typeface might look like Futura, but it’s different, and you’ll always recognize it by the letter S, I’ve made it unique.”

This was not uncommon at the turn of the century, it was typical of quite a few typeface projects that were concerned with modernization. Like the above-mentioned Futura, in particular. Just remember its rectangular ‘a’ with its round bowl.

IR: Maybe it’s the 2010s, but the point is, this wave is over. Yes, it brought some notable heroes, some notable glyphs which jumped out at you from the text, but they were created according to the same logic, and they made the whole type special.

This period, I’ll say it again, is over, though there are still some designers who are playing this game. And in exchange we have that titanic collision, the mixture of uncharacteristic features, plus the element of folly. Sometimes it’s the italics that goes nuts, or some other set of stylistic alternates goes nuts, or an entire style.

YO: But it’s kind of boring when all the ‘folly” manifests itself only in some of the styles or only in the stylistic alternates.

IR: That was only an example. In fact, this “folly” very often is found in the collision of features which have never collided before.

YO: In this respect, I’m very interested in the Swiss, who just go and make a light, barely noticeable reverse contrast everywhere, throughout the entire type case.

IR: I agree. This is another illustration of what I was saying. The Swiss are also notable in the area of display typefaces. In my view, they’ve become the leaders in experimenting with contours. To reach their goals, they break the form however they want.

IR: Euclid, where the stem looks like a zigzag. 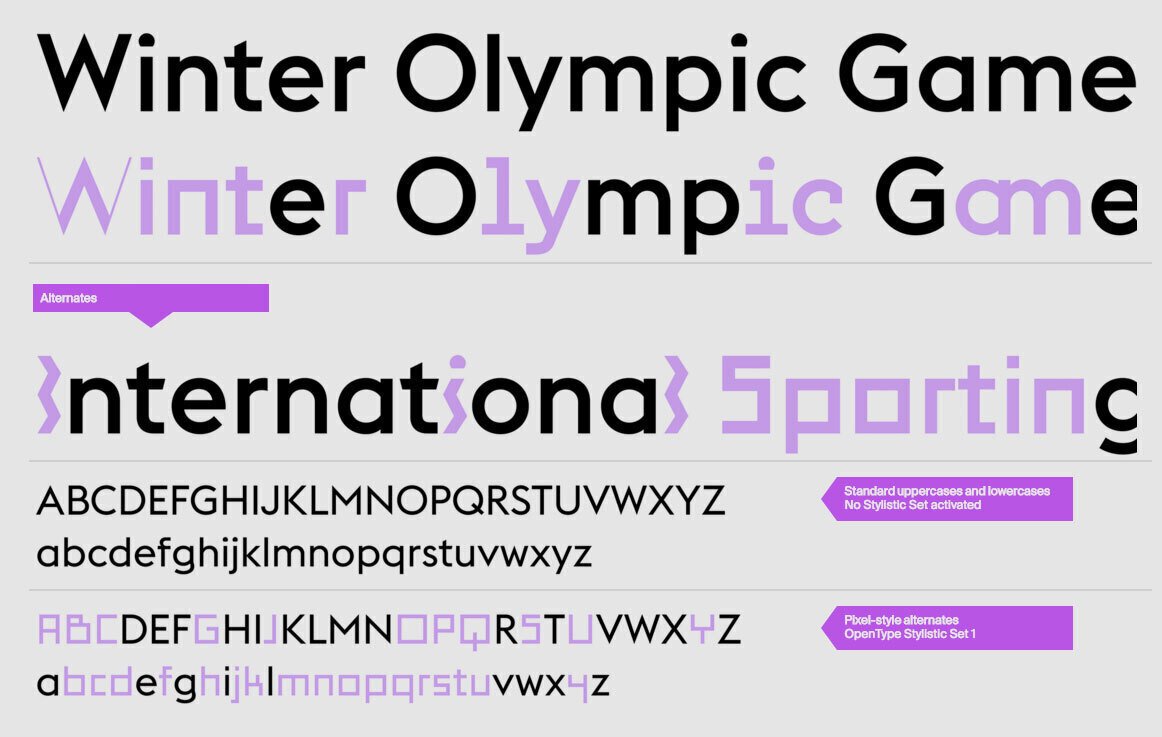 Euclid typeface by Swiss Typefaces studio. The image from the studio site.

IR: That’s because, in the first place, nobody has ever done this before, and in the second place, it’s a simple solution. That’s exactly what I was saying at the beginning – it only looks modern because it was born in simplicity.

Thеre’s another example: Dala Prisma by Commercial Type. In Dala Prisma, every stroke looks like it was drawn many times by a thinner pen. A similar example is Obsidian by Hoefler, which Andy Clymer made with internal shadows, like an engraving.

YO: What about engraved typefaces?

IR: Engraved typefaces look modern for a different reason. In my view, the entire Dala line looks fresh because it came about from the collision of different styles. On the one hand, it’s a classic antiqua, a broad nib pen that is felt in every glyph. On the other hand, it’s the idea – [which is] communicated through simple but quite modern means – of turning the antiqua into a disassembled stencil plate, making each element as primitive as possible. A little circle or a simple stroke of a broad nib pen, just where it’s needed.

IR: I agree, it looks complex. But it also looks modern, because it’s a collision of eras and styles.

YO: I think I know what quality it has. And I think it’s a positive development: Both Dala Floda and Obsidian are very daring. And I’d argue that it’s precisely because of this daring quality that they look modern, because they have a certain drive, a certain velocity. But I’m sure that in 10 years, even after these typefaces aren’t modern anymore, the daring won’t go anywhere.

Obsidian by Andy Clymer. Image from the site typography.com

IR: Of course it won’t go anywhere, but what’s in fashion will be different.

YO: So then we have to define what “in fashion” means.

YO: But I don’t like the word “fashion” in relation to typefaces, I can’t understand what it is supposed to mean.

IR: I can tell you why. It’s hard to define the criteria of fashion – it’s hard to evaluate a typeface according to a scale of “fashion” and to figure out to what extent it doesn’t quite make it to the top. This criteria is very subjective and that’s why you don’t like it. But the word comes in handy when describing the feeling of having your tastes reflected in mainstream opinion. And this includes graphics.

For example, take Swiss typography, which is now undergoing a kind of renaissance…

IR: Sure, but we don’t even know when this renaissance will reach its peak. For several years we’ve watched the Swiss persistently follow their path of minimalism in typography, demonstrating new techniques along the way.

The culture of typefaces is based on optical compensations – how do you draw the connection in the letter “n” so that the impression from the contrasts will be a balanced one? And here come the Swiss and start to make sans serif typefaces where all these optical compensations are simply ignored, where a thick stroke joins a thick stroke and isn’t compensated in any way. Everybody looks on with astonishment: it’s so thick, what you get is some kind of thick triangle.

YO: And they just calmly say: “Yes, it’s a thick triangle, so what?” 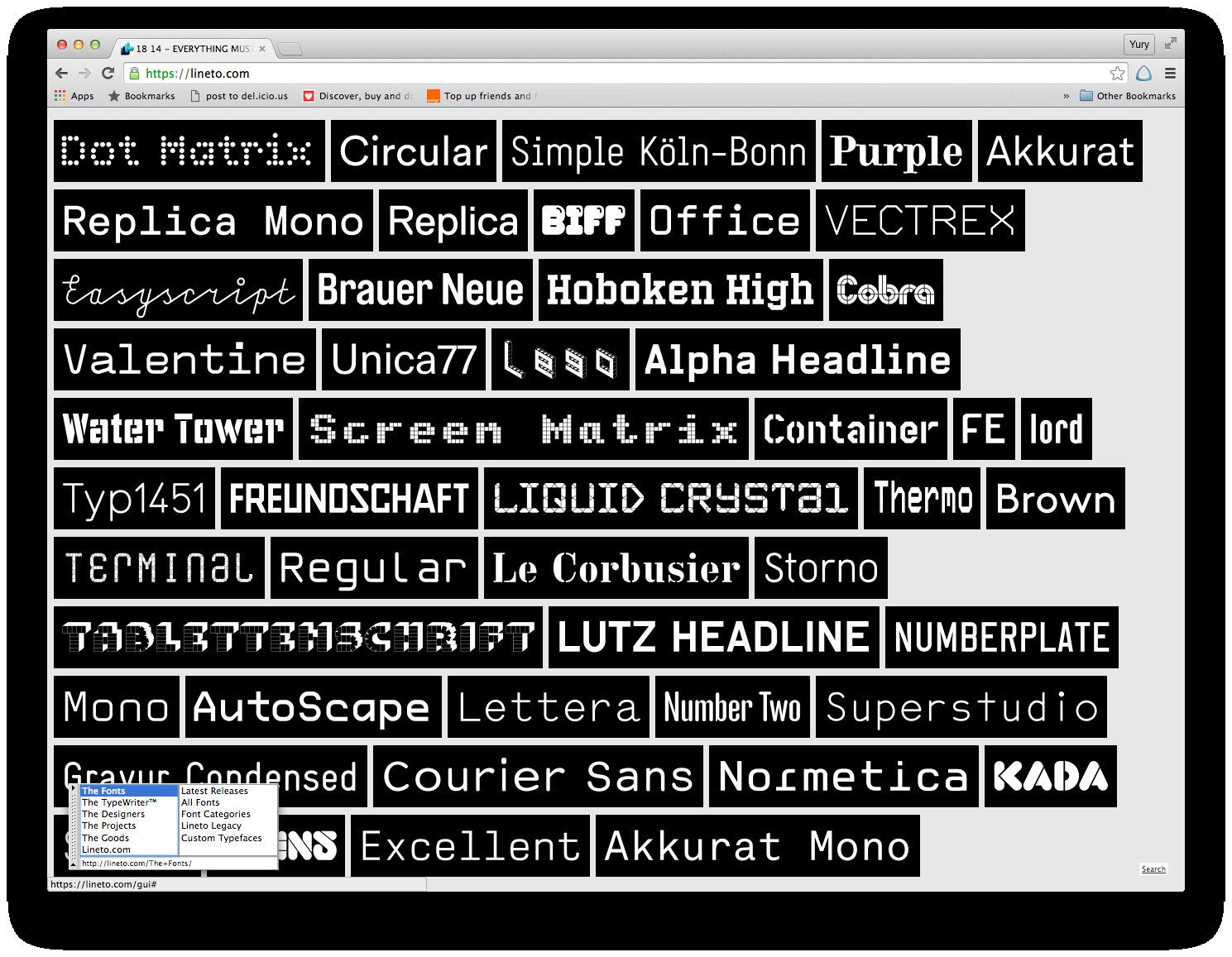 IR: They say: “But we’ve made everything else simple. We know about the triangle, but it doesn’t bother us, we like it that way.”

YO: They make no apologies, which makes you love them even more. And you feel a little lost in such moments, you start to think that they’re right, whereas you’re stuck two years in the past.

IR: Yes, and you keep on optically balancing things that you probably don’t even need to balance. You and I encountered a typeface in which we saw that the rising diagonal in the letter ‘K’ was much thicker than the falling one, and we couldn’t figure out how something like that could still exist in a font, why the designer doesn’t fix it.

YO: And nobody’s going to fix it. So that means that a modern font is also a bit arrogant?

IR: That too. When describing modernity, as it relates to fonts, it’s fully justified to use the words “daring” and “arrogant.” And, between them, I would prefer “arrogant.” What’s important here isn’t even boldness, but something bordering on insolence.

YO: This “bordering on insolence” is exactly what I associate with being “in fashion.”

IR: By the way, that’s a great connection – what is in fashion is often insolent.

YO: Yes, here one might once again remember the end of the 90s and the early 00s, when everyone wore fluorescent clothes. It looked horribly arrogant, and it looks no less arrogant today, but these clothes are now out of fashion.

IR: In fashion it’s important to be the first to hit the mark, to meet expectations.

YO: So in the end, which criteria of “todayness” do we accept, and what, in the design of a typeface, should be more in the background?

IR: It turns out today you need: simplicity; a mixture of styles; arrogance, daring, insolence; original idea. And to the background we can relegate complexity, labor-intensiveness, historical revivals.

YO: We’ve just decided what is modern and hip for the two of us. But to our audience, also typeface designers, are we really saying: Drop everything and listen to us? Is that what we’re doing?

IR: Not quite. The two of us have a practical task – we created a store and decided that it would be concerned with modern fonts. And we ran into a dead end thinking about how to create the collection of this store, what we should do to make it stand out. Now we’re trying to set it all out clearly, to delineate its parameters.

YO: We should just provide a small disclaimer: this is our opinion on how modern typefaces should look.

IR: I think it’s worth continuing this discussion not only between us, but also with others, with graphic designers, with type designers. And then we’ll see where it will get us.