Quotation marks, braсkets, and various kinds of spaces are a multi-faceted and controversial subject. But apart from those, there are glyphs much more simple in terms of design and use — because of their ubiquity, they mostly fly under the radar. In this article, we continue to talk about basic punctuation characters.

In European and many other languages the period marks the end of a sentence. The symbol is also used for marking initials and abbreviations, and in some regions — as a decimal separator, or a separator of hours and minutes when registering time. Typically, the period is not used in the last sentence of a headline.

Depending on the typeface’s design, the period can be rounded, rectangular, rhomboid, etc. The symbol correlates to the dot above i, but is normally larger.

The period is a frequent symbol, therefore its shape affects the overall intonation of a typeface. The most principled designers can discard an (otherwise high-quality) typeface, if they are not satisfied with its periods.

In some legacy typefaces, the period has asymmetrical sidebearings — in this case, the space after the period would be excessive, you might need to track it. Today, it is customary practice design period with equal sidebearings — because the cases of its use are not limited to traditions.

In monospaced fonts, the period glyph has the same width as all the others — that means very wide sidebearings, which result in the widest space at the end of a sentence. Whether it needs to be compensated or not — that depends on your task.

Quality typefaces have period, comma, and other punctuation kerned, when paired with certain glyphs — to avoid excessive white holes in the setting.

According to typesetting rules in Russian language, initials shall be spaced, however in most cases regular spaces after periods are too much, which is why it is considered good manners to use thin spaces.

In any case, this situation requires a non-breaking space — surname and name should not be separated by line break. 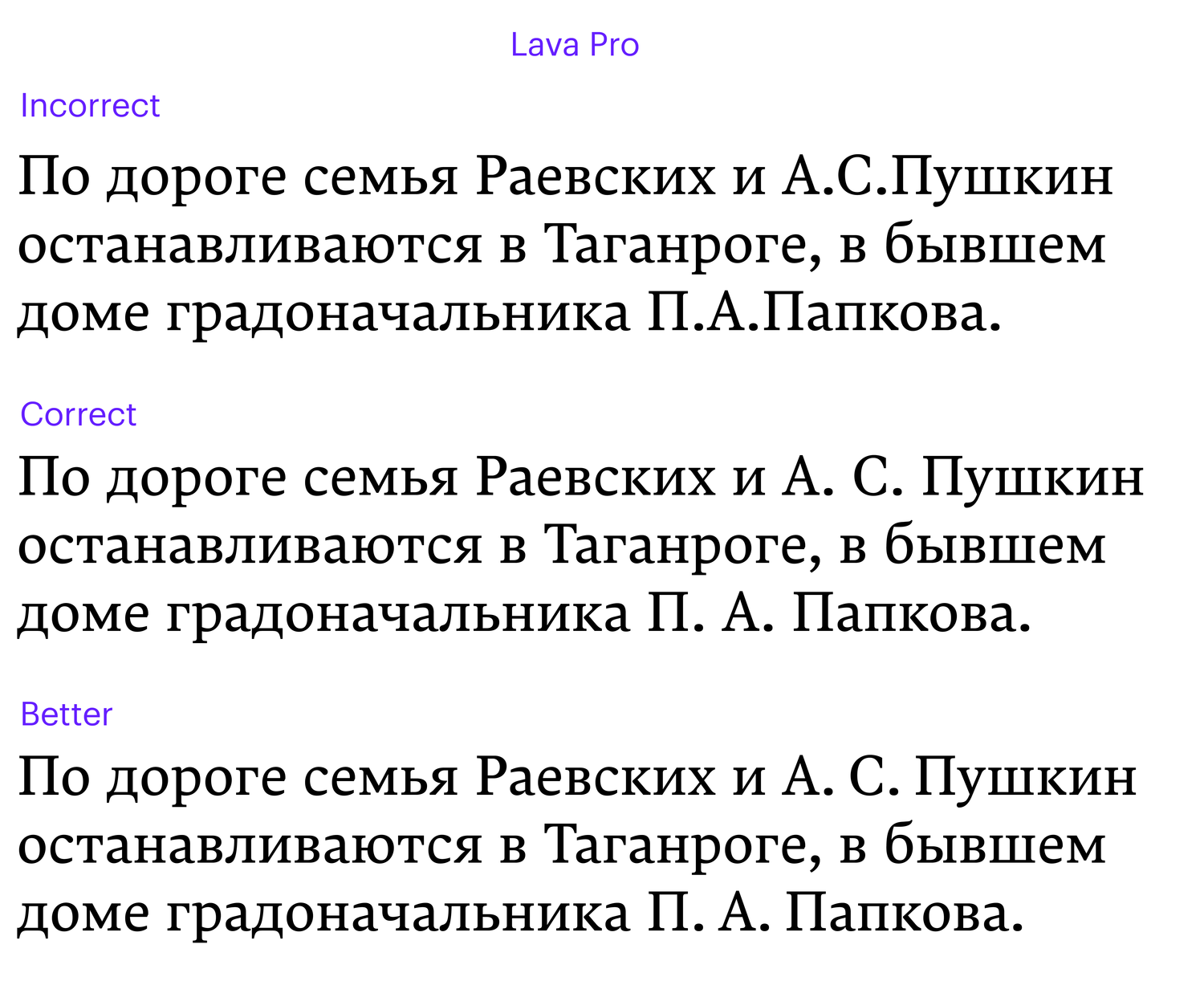 The difference between space and thin space can be more or less significant (depending on font, and point size), but a thin space usually looks neater with initials

The period is used as a decimal symbol in English language — as well as in the language of former British colonies, in China, Japan, and some other countries.

Period as a decimal separator — in the UK, the US, Australia, China, Japan, Switzerland, etc.

Russian language uses a comma as a decimal mark — as is the case in nearly the entire South America, Europe, Indonesia, Vietnam, etc.

The period as a decimal separator is the default setting in PCs and other kinds of gadgets, because they originated from the US. In most cases, the American notation system can be changed to a local one, but will keep reminding of itself in code and many UIs. 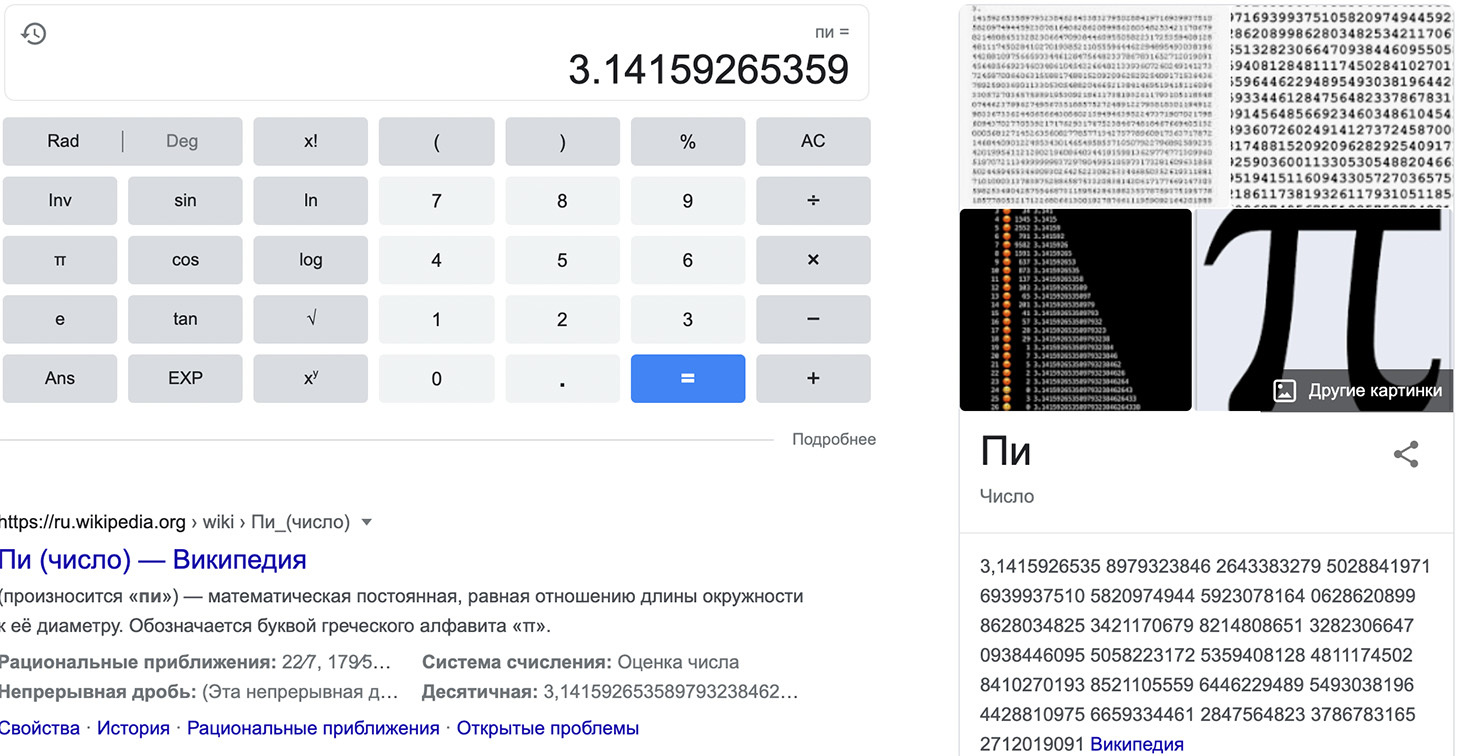 Google search results: the built-in calculator uses the period, while the link to Russian Wikipedia uses the comma

The period can be used for separating hours and minutes instead of a colon, but it is rather personal preferences or editorial policy than an established practice. For example, in Britain The Guardian writes 13.12, while BBC prefers 13:12. In Russia, the period in indicating time is used by certain online media — for instance, Afisha.Daily uses colon for indicating the time of publication, yet utilises a period between hours and minutes within texts. In some countries (such as Switzerland or Latvia) the period is considered standard and more preferable when registering time. 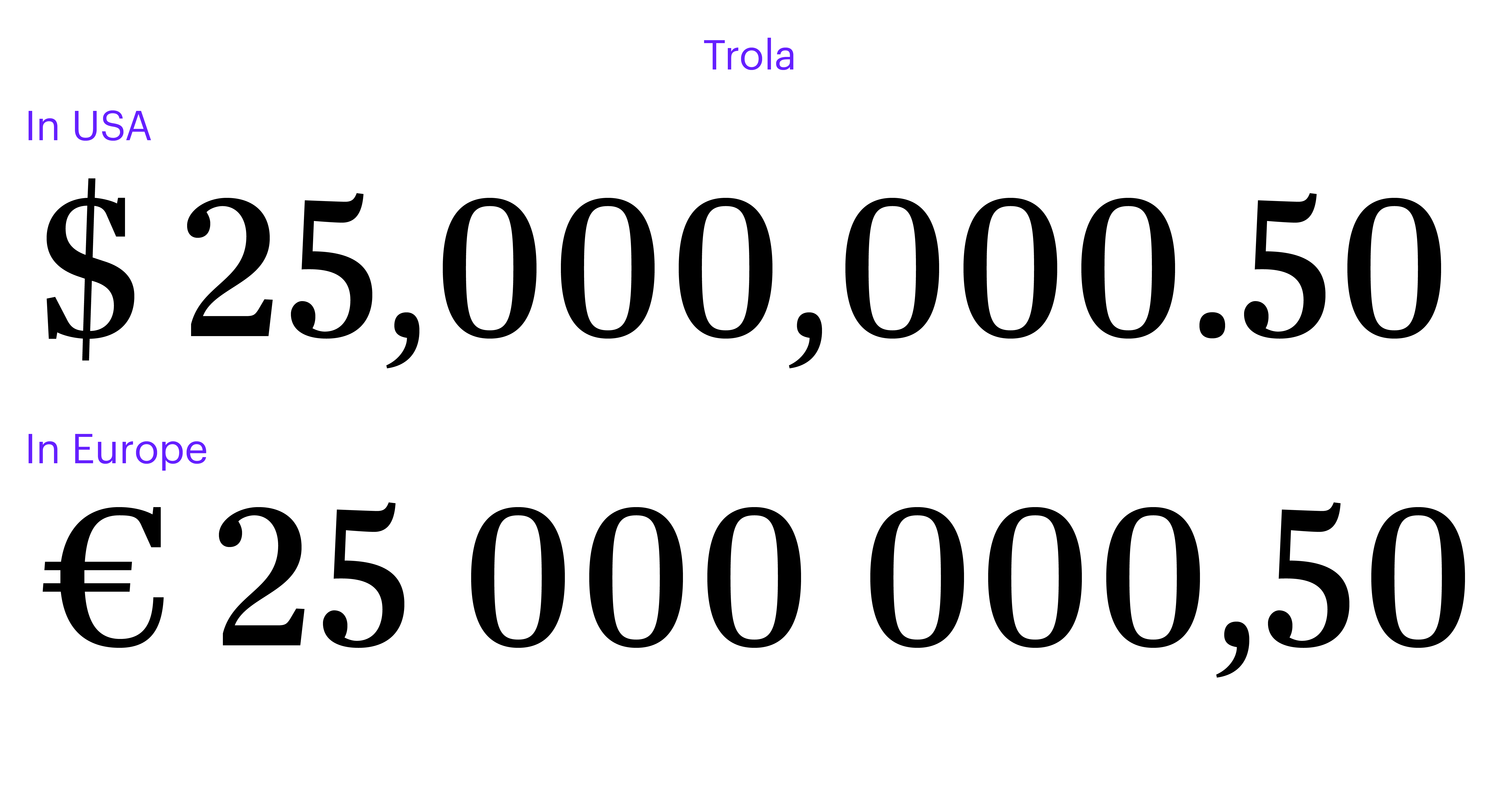 The comma can be constructed either as a circle with a stroke coming of it — or as one curving or slanted stroke. 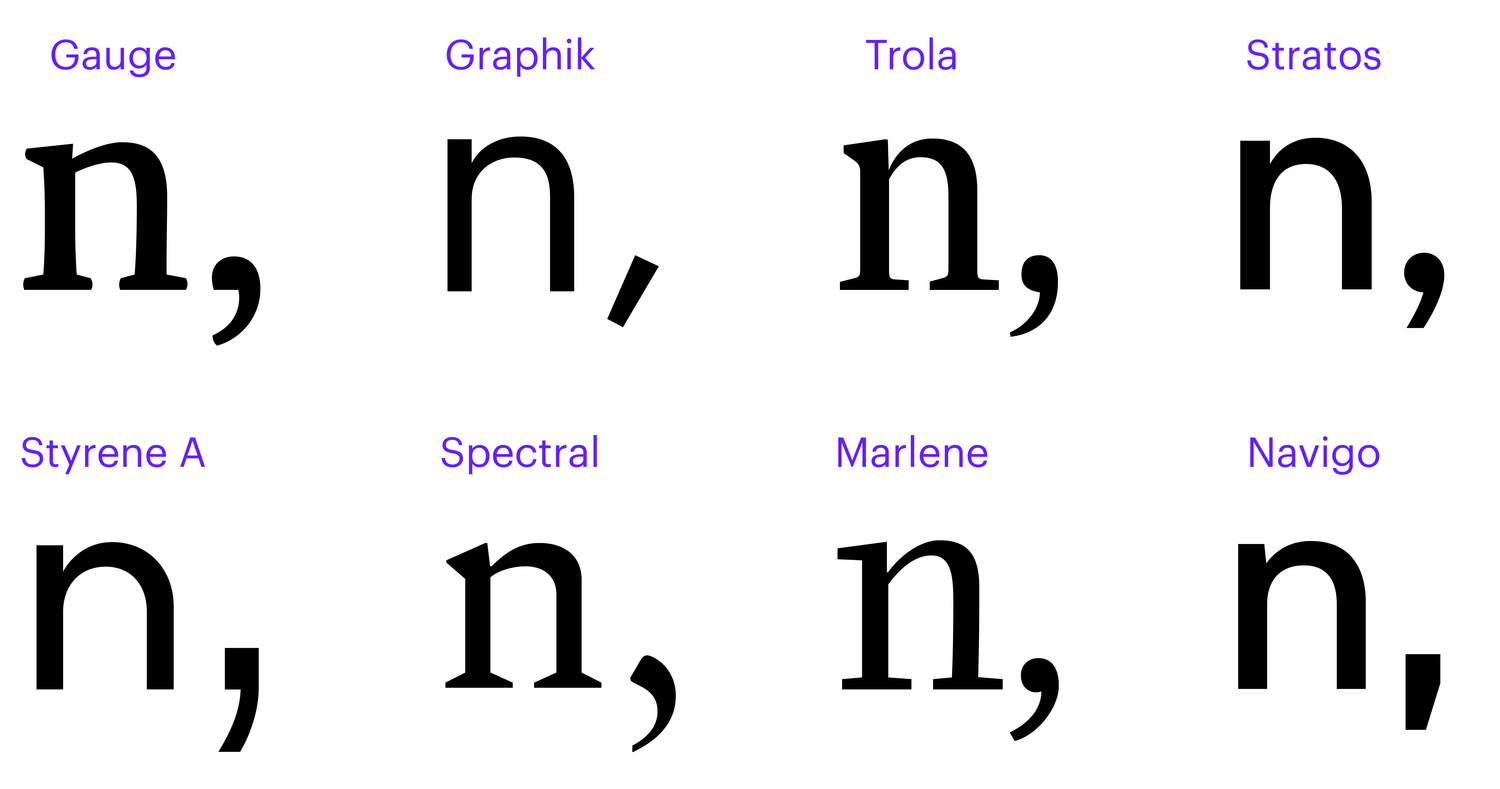 In most typefaces, the comma has identical shape to apostrophe and quotation marks. The diacritical comma in Latvian and Romanian often corresponds to the regular comma — that said, diacritics would be significantly smaller. As opposed to diacritical commas, the design of Сzech/Slovak caron Caron, or háček (ˇ) is a diacritical mark used in Slavic, Baltic, Uralic, and some other languages. In Czech and Slovak narrow letters with ascending elements (l d t L) can also have caron — this situations requires a special form, which is called Czech/Slovak caron. must differ from that of the regular comma and apostrophe. Replacing Сzech/Slovakian caron with an apostrophe is incorrect and misleading.

The ellipsis is a separate glyph consisting of three dots. It is used for indicating omissions, pauses, breaks, or interruptions.

In omissions and lacunae the ellipsis is placed inside brackets, regular or square, or pointy ones — this depends on the typographic tradition.

The ellipsis as a separate glyph can be looser or more condensed than three dots in a row. In certain software, three typeset dots are automatically replaced by one ellipsis — provided the typeface includes this glyph. 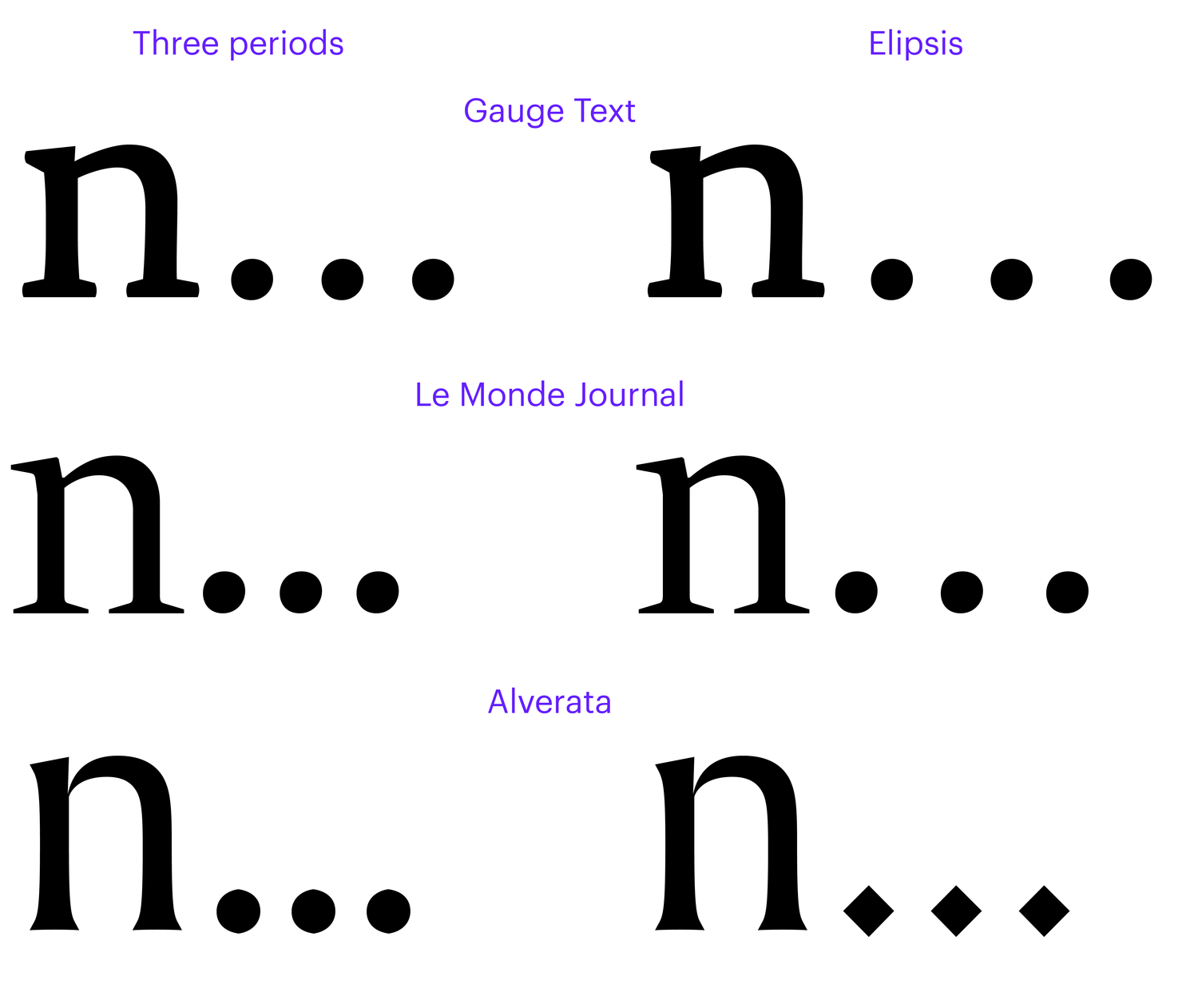 Fonts with significant differences between three dots and ellipsis. Usually, the only difference is spacing, but the shape can also vary sometimes (see Alverata) 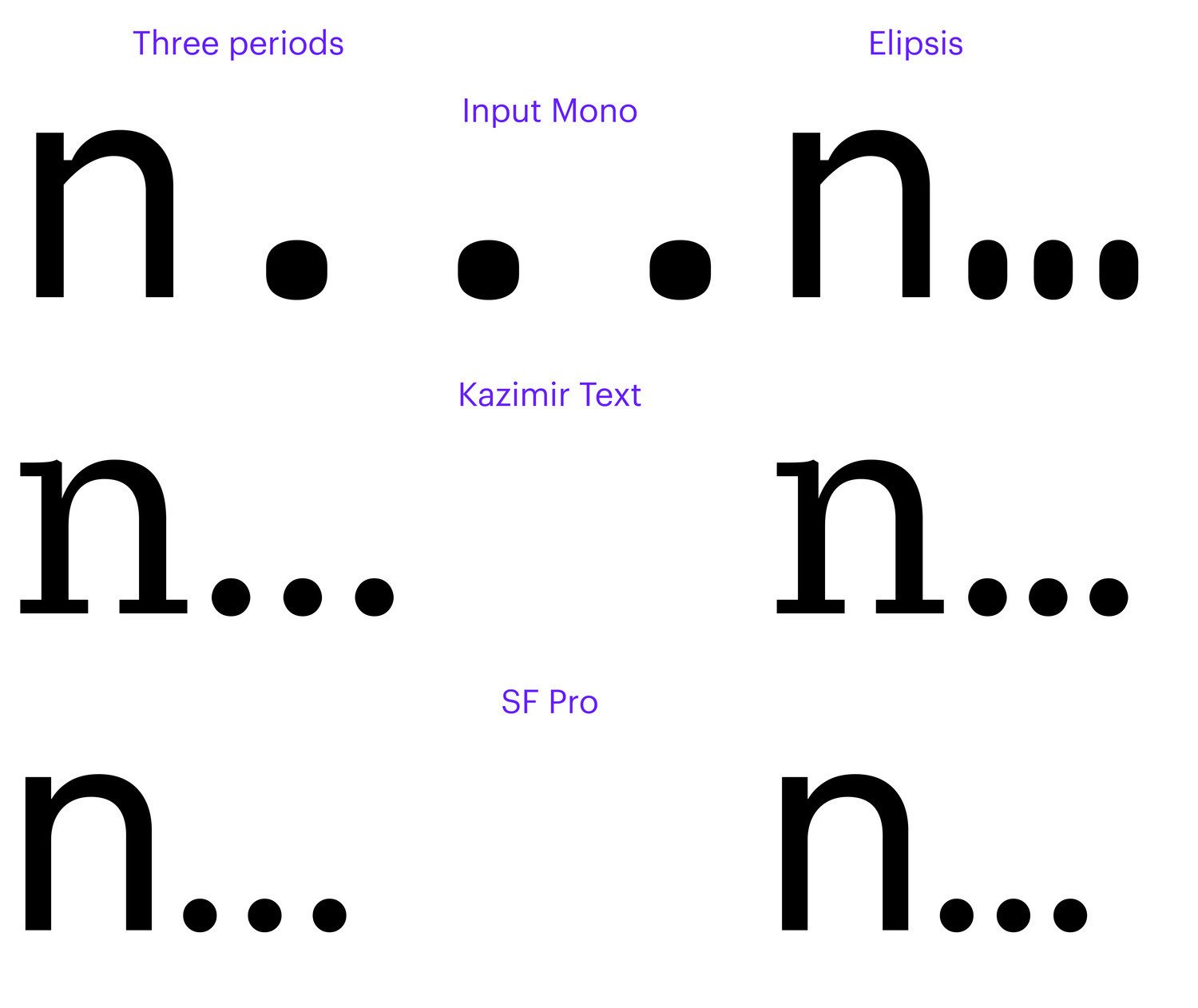 Fonts with ellipsis spaced tighter than three dots in a row. This is inevitable in monospace fonts, where each glyph has exactly same width

The bullet is a graphic marker, while the interpunct is a punctuation mark. Both glyphs are typically designed as vertically centered dots, but they may differ in size and sidebearings.

Normally, the bullet is larger and thicker than a period; it is used to introduce items in a list. The bullet symbol may take a non-dot shape, sometimes it even comes in several options — this depends on the type designer’s preferences. Apart from circular, bullets may be hollow, square, diamond, etc. We recommend looking into the glyph palette to see the entire range of bullets.

The interpunct is typically of the same size as the period, and is placed in the visual middle of the x-height. Depending on language and situation, the interpunct is used for interword separation, as a mathematical symbol, as a part of geminated l Ela geminada (The geminated l) is written as ŀl and is different in meaning and sound from a simple doubled ll. The typesetting of the geminated l generates debate and discussions: as an integral symbol it has no value in Unicode, while Ldot and ldot do have one. Most frequently the interpunct is used instead of the dot, many type designers create localised features for correct spacing — however, the problem of displaying the integral, not breakable symbol remains. Sometimes the interpunct is replaced by a regular period, placed between the letters on the visual middle, but in certain fonts this option would look too heavy. in Catalan, etc.

Bullets and interpuncts: the bullet is for lists, the interpunct is a multiplication sign, or part of ela geminada in Catalan, or a symbol separating graphemes in Occitan

Often, an interpunct or a bullet are used for separating parts in a sentence — for example, for separating different languages on one line. In such cases, it doesn’t really matter which glyph you use — as long as it does the job. The interpunct as a separator may look neater, while the bullet would be more visible.

The Unicode table contains several items related to bullets and interpuncts, which scares both designers and font users. In addition to basic Bullet (u+2022), there is also Bullet Operator (u+2219). Apart from regular interpunct Middle Dot (u+00B7), there is Dot Operator (u+22C5) and a number of local variations, such as Greek Ano Teleia (u+0387), and Word Separator Middle Dot (u+2E31). The latter is almost never present in fonts. The Greek Ano Teleia serves as the semicolon, is normally as large as an interpunct, but placed higher — these symbols should not be confused.

The Unicode Consortium recommends using operator glyphs in all math settings. Those may look different: a Bullet Operator might be intended as a multiplication sign, while in other cases it correlates to a regular bullet. Sometimes there is no pattern whatsoever, it all comes down to the decision of a type designer.

In different fonts, availability and shape of these additional symbols differ, while their use is discussed both in type design communities and on other user forums. 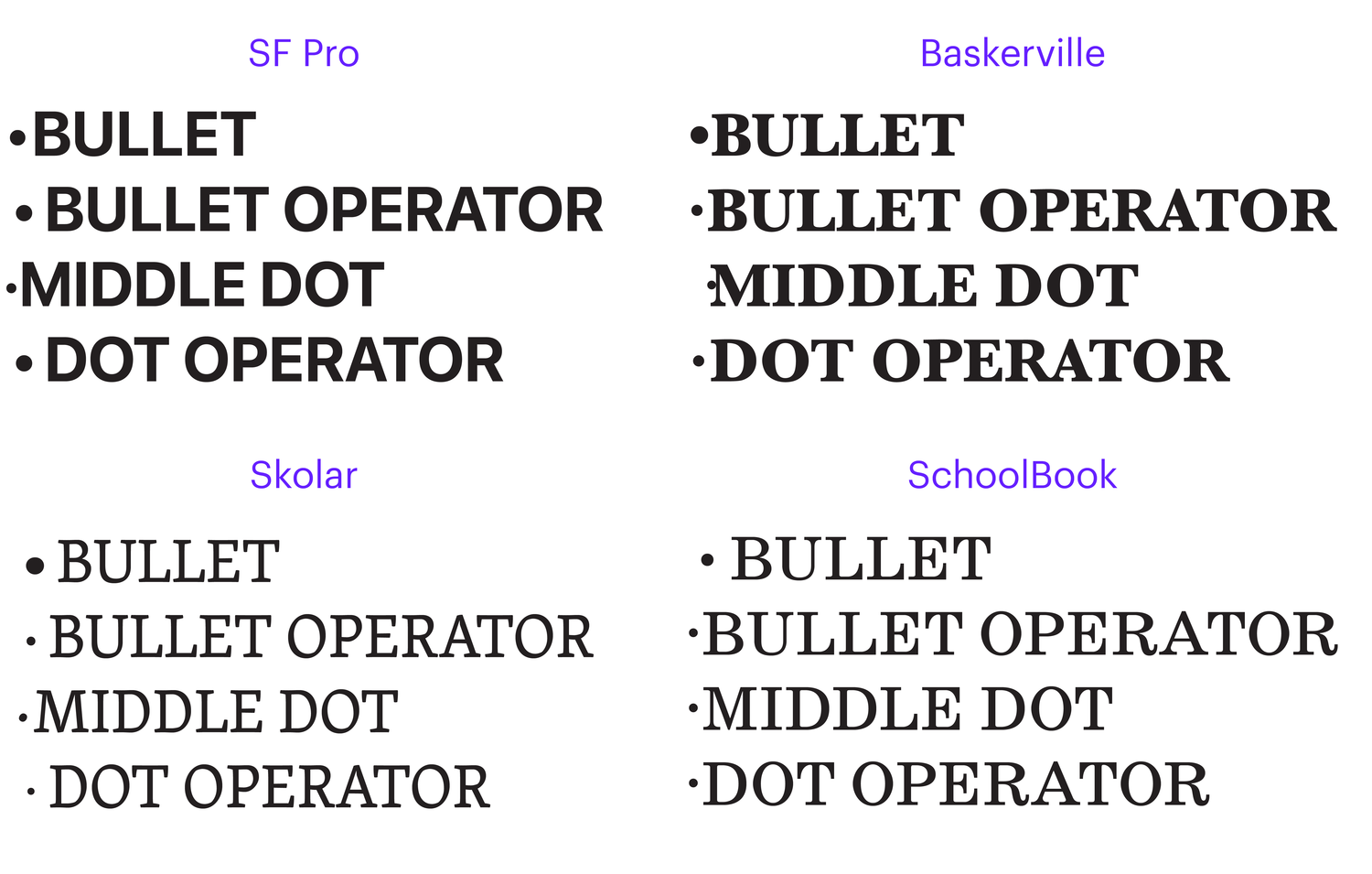 Apart from different sizing, some fonts have different sidebearings when it comes to bullet and interpunct derivatives 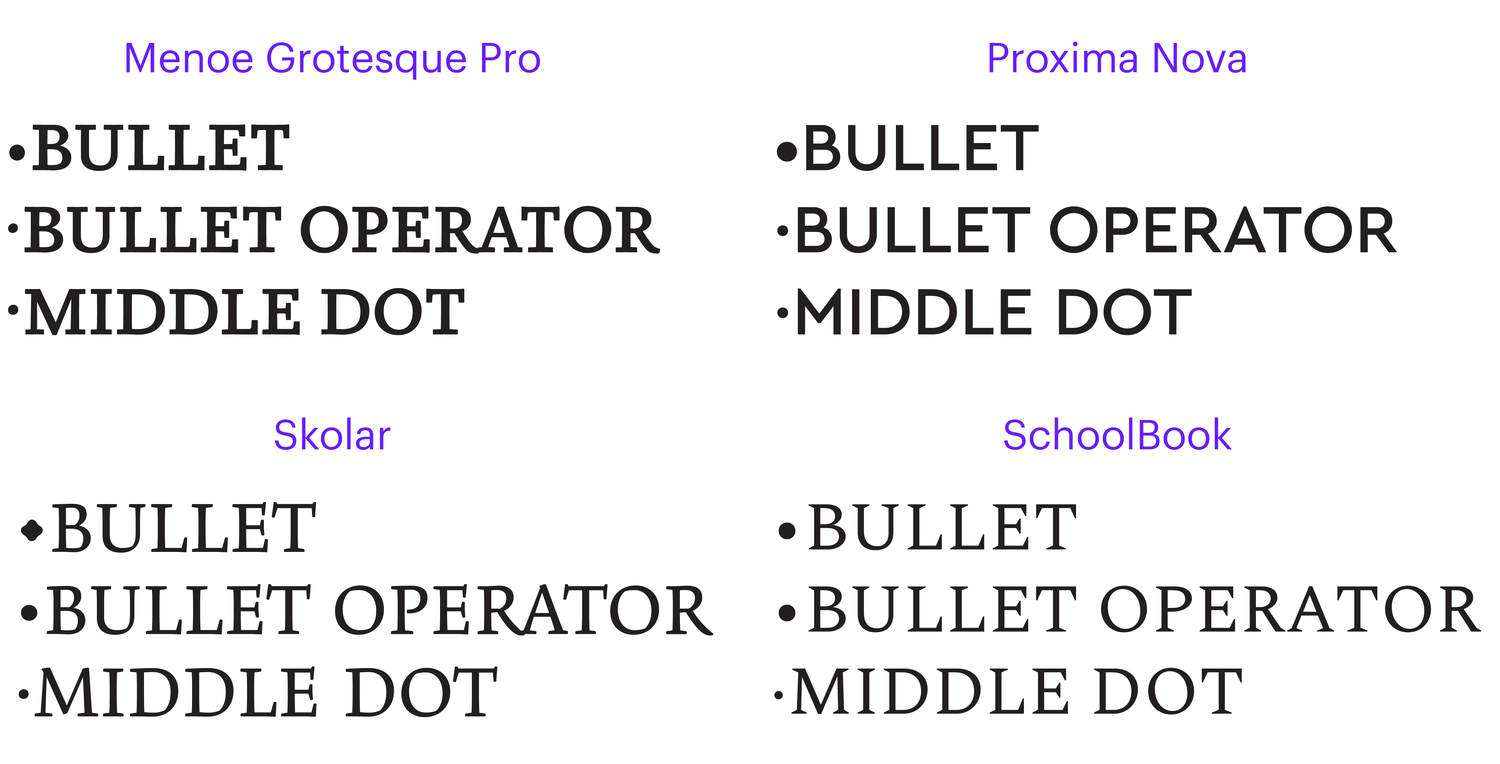 Bullet Operator may have the shape of a regular bullet, or an interpunct — or may correspond to neither

In French, the two-piece punctuation glyphs are spaced with a regular or thin space. Depending on the situation, some spacing of these symbols might be necessary in other languages — for example, when setting in all-caps.

According to GOST technical standards, Russian language uses the semicolon to denote time:

3.5.2 Elements presenting dates and time of the day are placed one after another without spacing.

Where needed, one may use the following symbols as separators:

: (semicolon) for separating the elements of the time of the day (‘day’, ‘minute’, ‘minute and second’);

/ (slash) for separation in presenting the period of time;

However, using period for registering time or date should not be considered mistake in non-crucial situations.

Normally, the colon and the semicolon are not case-sensitive — the semicolon is fixed to the baseline due to its comma, and the colon usually follows this lead. Lifting just one of the pair looks quite weird:

SF Pro has a case-sensitive colon. But if you have a semicolon next to it, this colon will offend

The situations requiring a lifted colon are quite rare. The most common are denoting scale or time with lining figures. In such cases you can also adjust the colon manually.

If scale is denoted in a large headline (as opposed to body text), the manually lifted semicolon would look neater 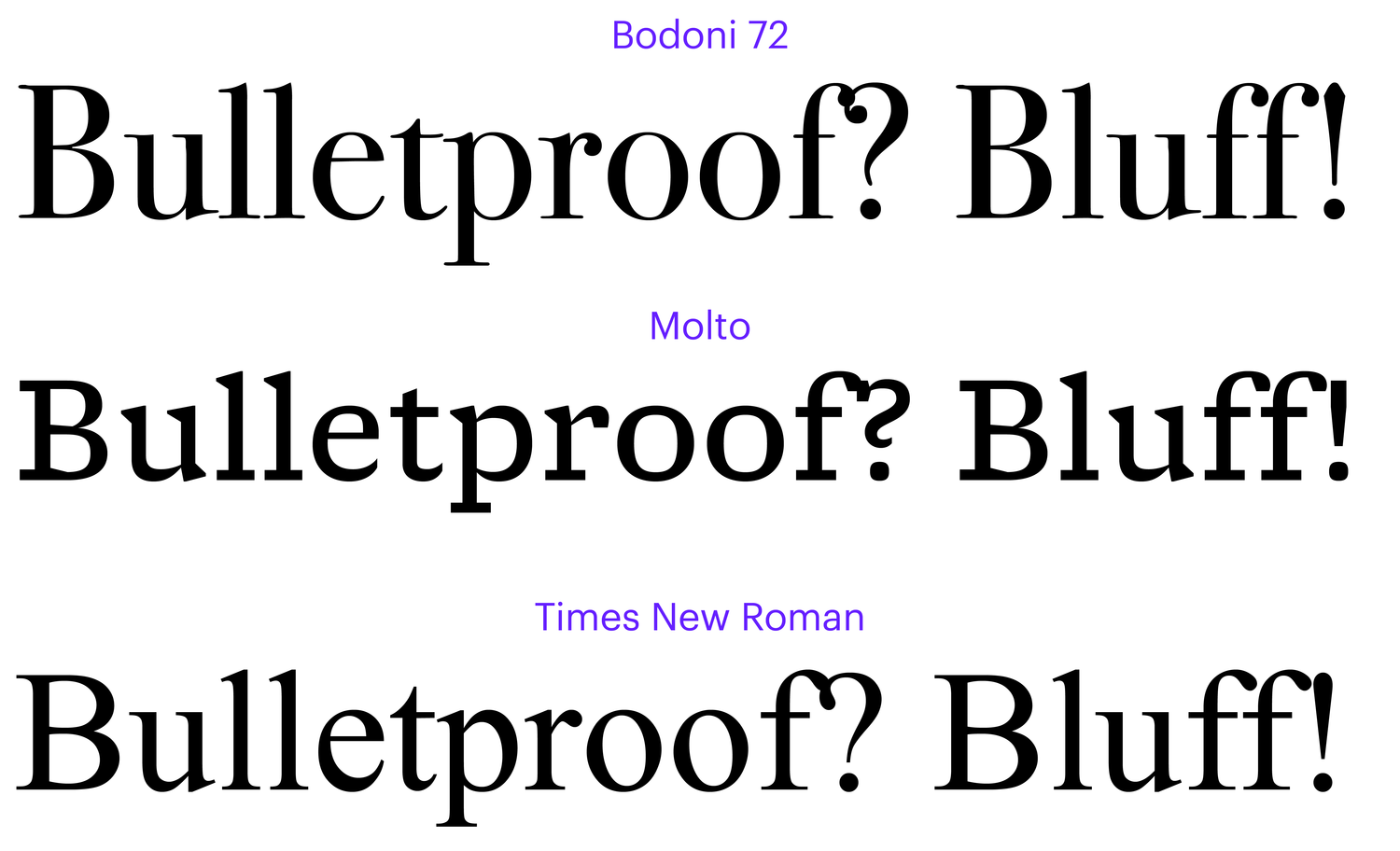 If there is no kerning in certain glyph pairs, they might require a thin space between

The inverted exclamation mark and question mark are used in Spanish and some other languages, they can be lifted when setting in uppercase, if there is an applicable Opentype feature.

The 1960s saw an attempt to introduce the so-called interrobang — a combination of exclamation and question marks, intended for rhetorical questions. The interrobang is still drawn in many fonts, despite rarely being used as intended. 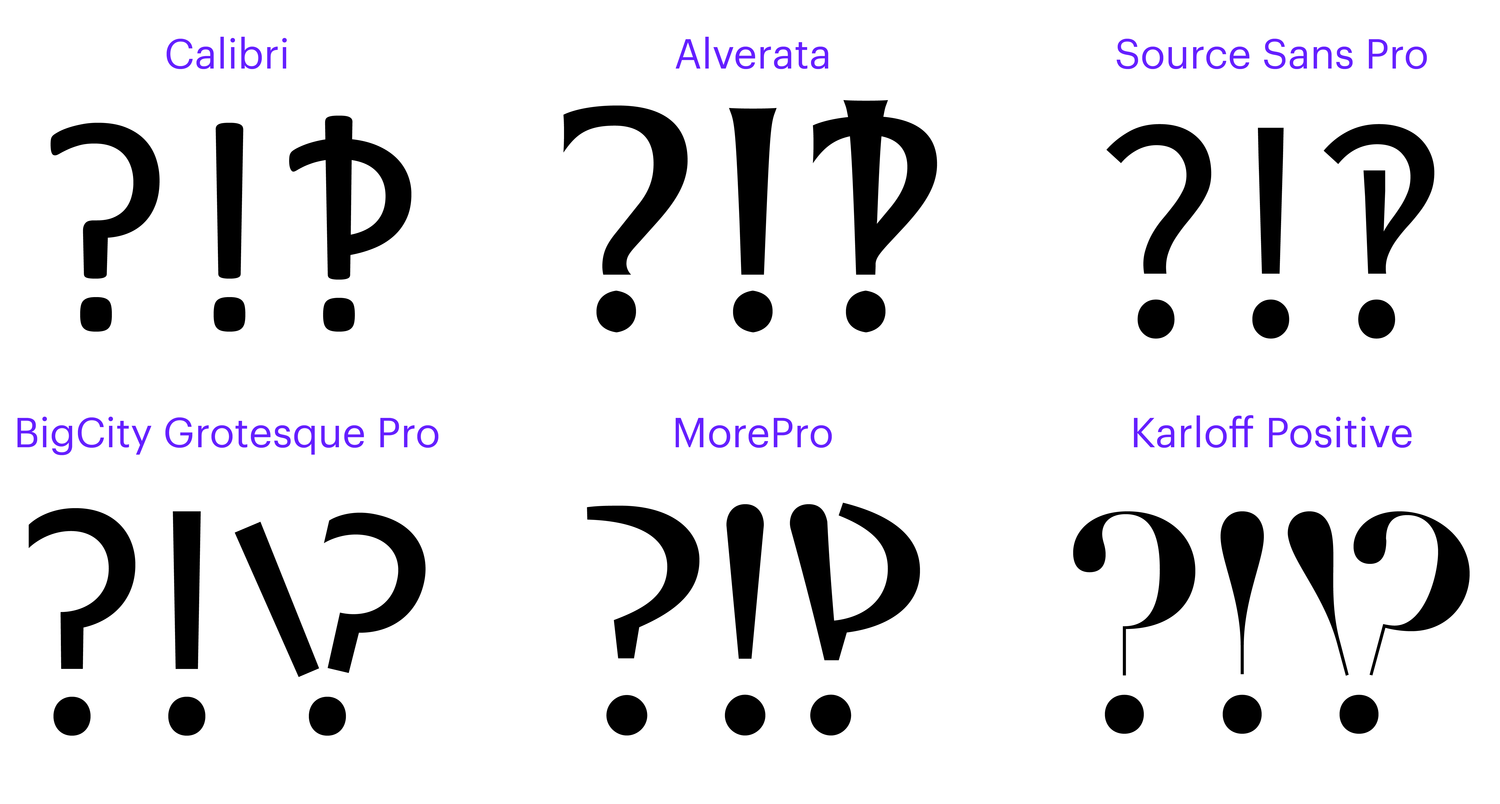 How to type the symbols