We start a new section of our Journal — the Manual. We want to explain the main terms, tools, and elements of typography — specifically, typography in Russian. Our goal is to give the most comprehensive and up-to-date information, for the designer to make an informed decision on any type issue. Chapter One is Punctuation, our first topic is The Dash.

The dash is among the most controversial of punctuation marks. It looks different in different fonts, and typographers argue over what spacing should be set around it (if any). There is no single fits-all solution and so it is important to pay attention to how this character looks in the selected font and what kind of reader experience you would like to achieve.

We, type.today, prefer to use the em dash separated out by thin spaces — both in Russian and in English.

In Russian, the dash is referred to as a тире [tʲɪˈrɛ] — a borrowing from the French tiret, tirer — “to stretch”. What we usually refer to simply by this term is the em dash, or длинное тире (the long dash) in Russian. This signals a short pause in the reading process, separating two different semantic parts of a sentence from each other, or omitting words that do not affect the general meaning of the sentence. The dash is also used to mark direct speech.

Depending on the convictions of the designer, technical capabilities and characteristics of the font, the em dash is either surrounded by normal spaces, thin spaces, or no at all.

In metal type, the dash was separated by spacing sorts* of varying width. In the computer age, the sidebearings * for a dash are determined by the font’s author, and most users separate dashes with normal spaces. In some fonts(e.g. Arial) the dash has no sidebearings at all, while in others large sidebearings allow to omit additional spacing — such differences create additional confusion.

In Gauge, an Em dash comes with sidebearings sufficient to eliminate the need for additional space glyphs. 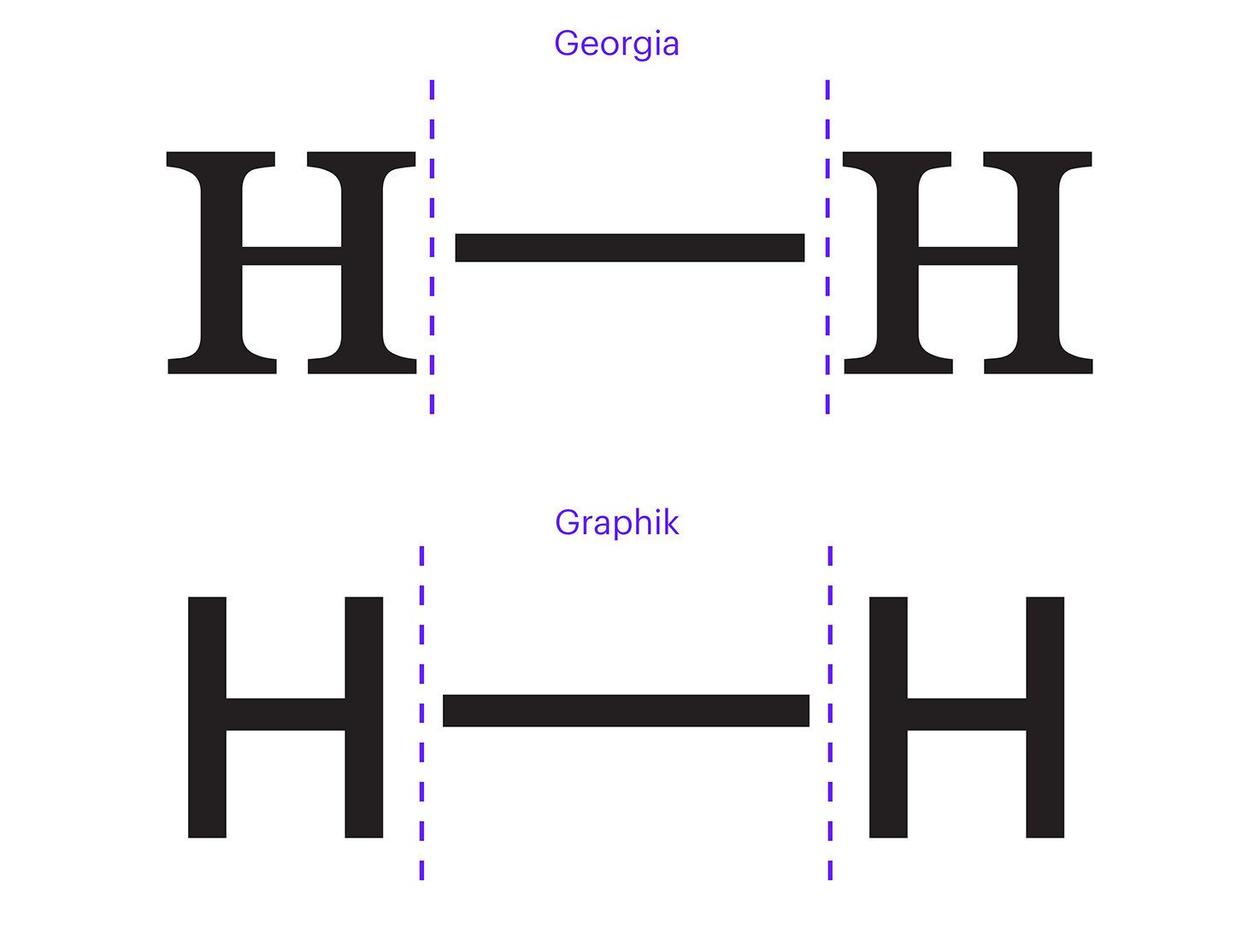 On the web, everything is further complicated by the inability to use spaces of different widths via a keyboard. Instead, they should be put as HTML character entities, for example &thinsp;  for a thin space. When copying from a text editor, many platforms replace special spaces with normal spaces. Special spaces do not work at all on social networking sites.

Professionals have failed to reach any consensus on this issue. Most proofreaders space the dash with normal spaces but this might not work in the selected font. You, together with your proofreader, have to decide how to work with dashes in the font selected for a given project.

If the em dash has zero sidebearings (i.e. dashes merge into a single line when typed out in a row), thin spaces should be placed before and after it. If thin spaces are not available in the program being used, non-breaking spaces should be placed before and after the dash, reducing their size to 3-4 times that of the font size.</p> Alexandra Korolkova Live Typography)

A dash at the beginning of a paragraph indent should be separated from the subsequent text by an En. A dash after a comma or a full stop, as well as between numbers in a “from — to” context, should be set without spaces before and after. In all other cases, the dash should be surrounded by hair spaces. Pinkhus Gilenson Handbook for Technical and Art Editors

I finally realised why I dislike separating out a dash with hair spaces—I mean, this way. A dash signifies a pause, a silence. Usually, the silence between words is indicated by spaces. A dash — a long pause — would seemingly imply that there should be more white space around it. But suddenly the space disappears altogether—it becomes filled with sound, the humming of a wire, connecting adjacent words into a chain instead of properly separating them. Yuri Gordon Facebook post

The most sensible thing that can be done, especially when considering the features of Russian typography, is as follows: Use a three-quarter dash with positive sidebearings for “simple typesetting” (without any spaces), which, incidentally, eliminates issues connected with linking words/hyphens. And, as an alternative, there is the good old classic en dash with zero sidebearings, for fans of manual typesetting (here, if the letterform permits it, the length of the dash can also be altered manually and whatever spaces inserted as desired, or indeed it can be left as it is, following the rules set down in a particular Guide. Yevgeny Grigoryev discussing the dash and its spacing in the Type&Typography group on Facebook

Historically, an em dash was given the same width as a capital M — hence its English name. Some non-Russian-speaking typographers argue that em dash is too long for text setting, though traditions and rules may vary from country to country.

The em dash is a nineteenth-century standard, still prescribed in many editorial style books, but the em dash is too long for use with the best text faces. Like the oversized space between sentences, it belongs to the padded and corseted aesthetic of Victorian typography. Used as a phrase marker – thus – the en dash is set with a normal word space either side. Robert Bringhurst The Elements of Typographic Style

The only right thing to do is to use lines of half the length, en dashes, and separate them from adjoining words by using the word spacing normal to the line. Jan Tschichold The Form of the Book

One can use the em dash for aesthetic reasons, or if the en dash in the selected typeface is too short or clumsy. Friedrich Forssman Detailtypografie

In contemporary typefaces, dashes come in differing proportions, sometimes there are even several different types of em dash — the “old-fashioned” long form, and a more modern shorter variety, etc. 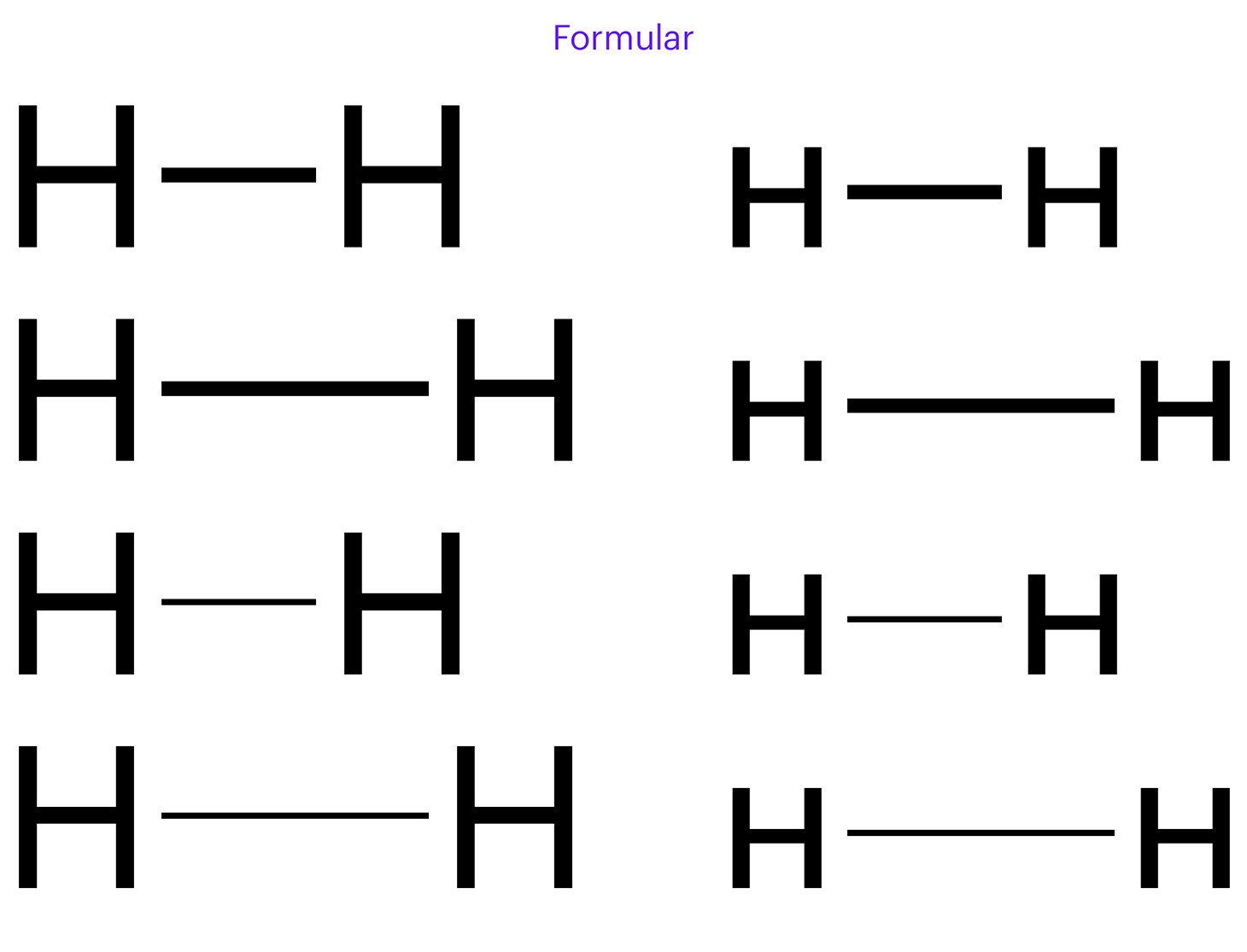 There are 8 types of em dash in Formular by Brownfox 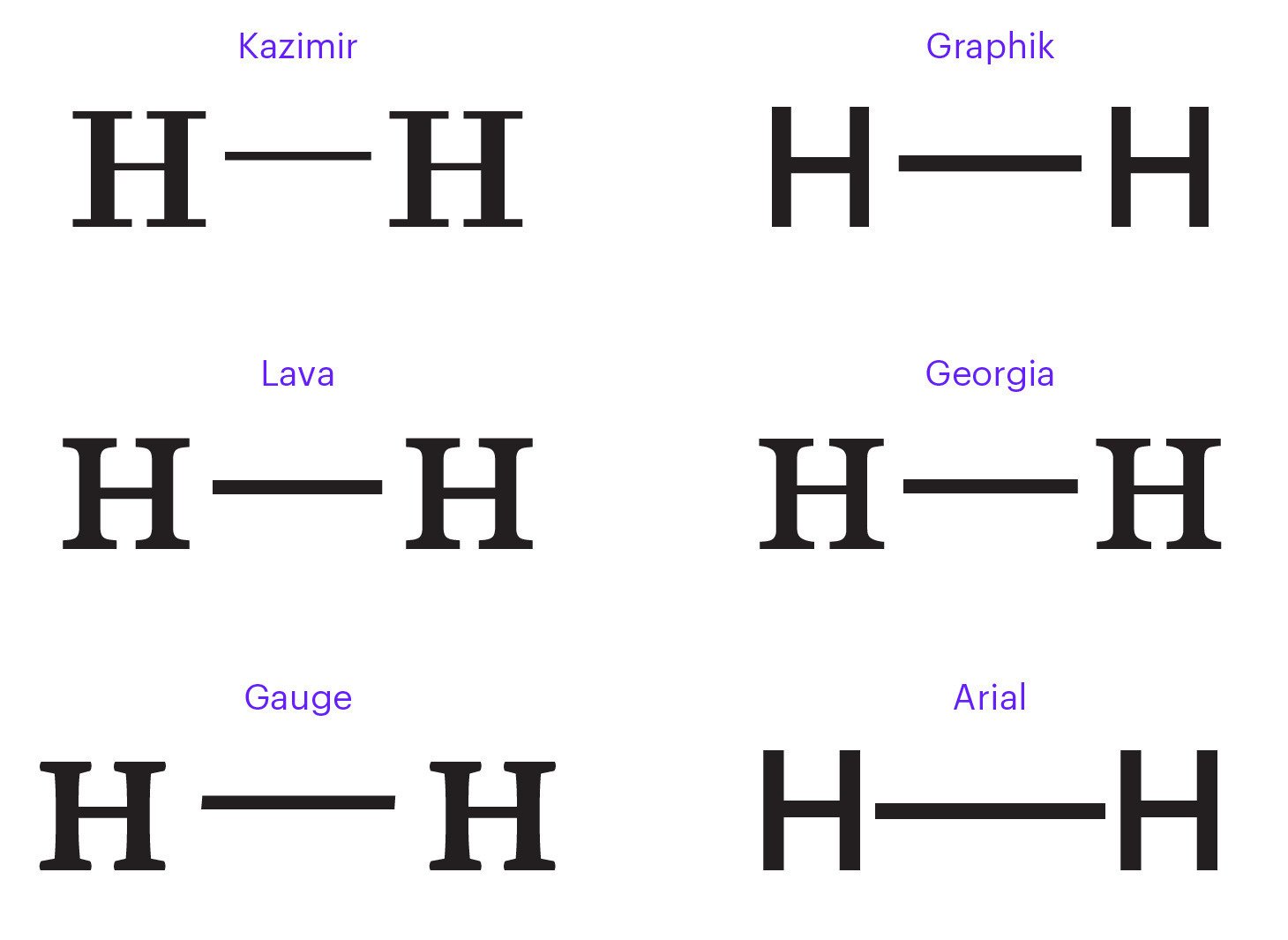 Em dashes in Gauge and Arial are quite different in width from those in Kazimir or Graphik. If dashes are often used in a particular typesetting context, their length can affect the general feel of the typeset.

Throughout the 20th century, there has been a tendency to push for ever narrower dashes in typefaces, while the present-day trend is for narrower proportions across the board, both for the dash and typefaces in general. In some countries, as in Great Britain and France for example, 21st century books often have en dashes instead of the em dash. For typesetting in Russian, this can paradoxically be seen as either a sign of progressiveness, the influence of contemporary European practice, or a mark of inconsistency.

In modern Russian typesetting, this dash is most often used when denoting numerical ranges, e.g. 1990–1998. In English texts, an en dash is used for any range, even those typed out in full words: October–November. In such situations, an en dash is not separated out with spaces. 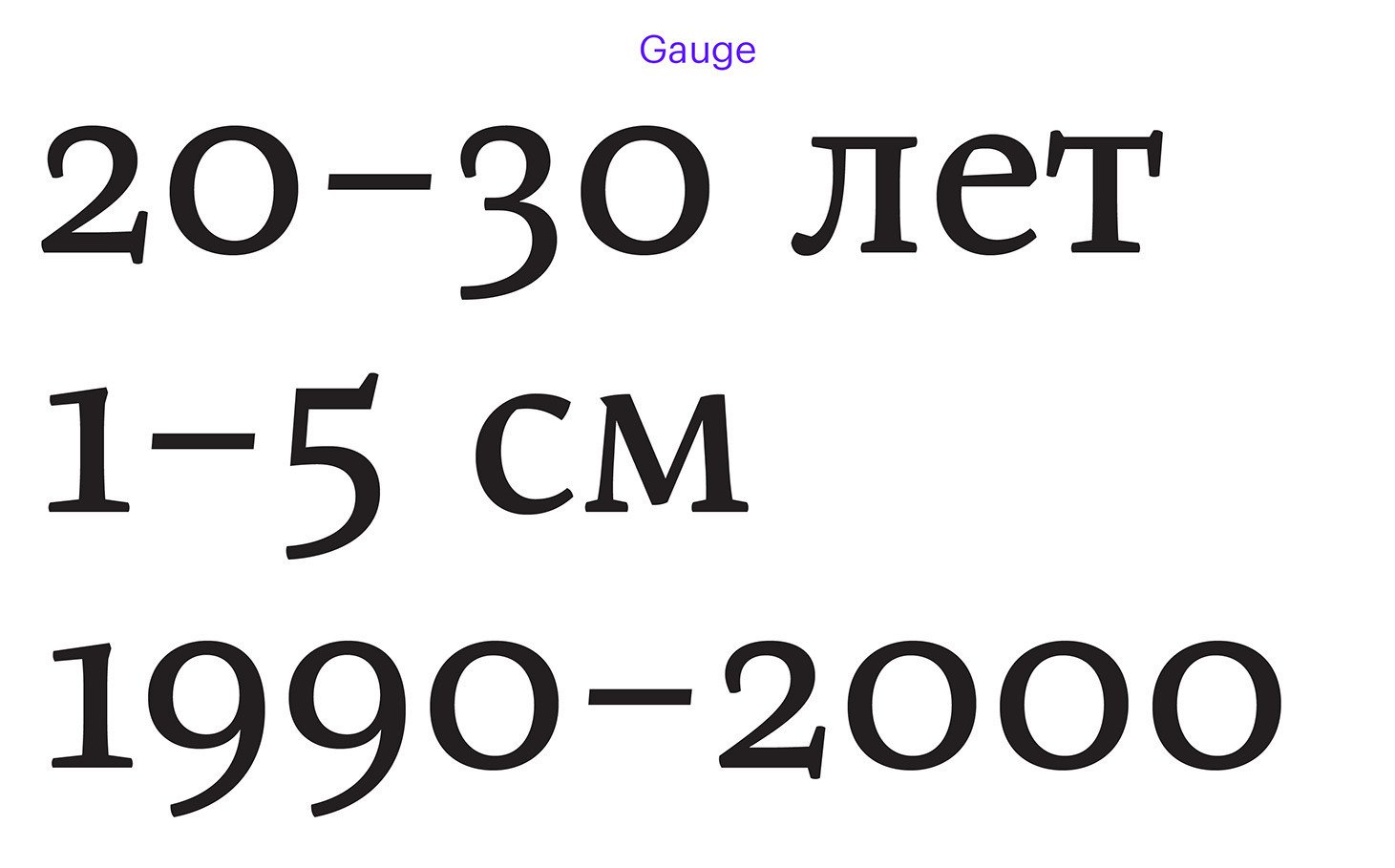 Known in Russian as the “short dash”, the en dash derives its English name from the fact that its width was initially equal to that of the letter N. As with the em dash, these dimensions are often no longer valid.

It is vital that the dash not be confused with a hyphen or a minus sign. A hyphen is an orthographic character, used for compound words and carrying over. The minus is a mathematical sign and is equal in width to other mathematical signs, such as the plus sign. A dash is a punctuation mark, and is used for various linkages in sentences and direct speech.

The Russian tradition of editing has no single rule by which an en dash should be used to indicate any kind of range. However, a dash should be employed in such situations, rather than a hyphen:

A dash is placed between two or more words to indicate:

In these cases, a dash semantically replaces the words „from … to“. Alternatively, if the conjunction „or“ can be inserted between two adjacent numerals, then they are connected by a hyphen, e.g. уехал на два-три дня (he left for two-three days), though a dash is used with digits: … 2–3 дня (2–3 days).

According to Russian editorial rules, a dash is not used when carrying over to the next line, except in cases of direct speech. If a dash is found at the beginning of the line, then this is direct speech according to the rules of proofreading. In texts, therefore, dashes should be separated off on the left with non-breaking spaces.

Incorrect: it seems as if the dash indicates the beginning of a piece of direct speech

Correct: the dash is separated off on the left with a non-breaking space 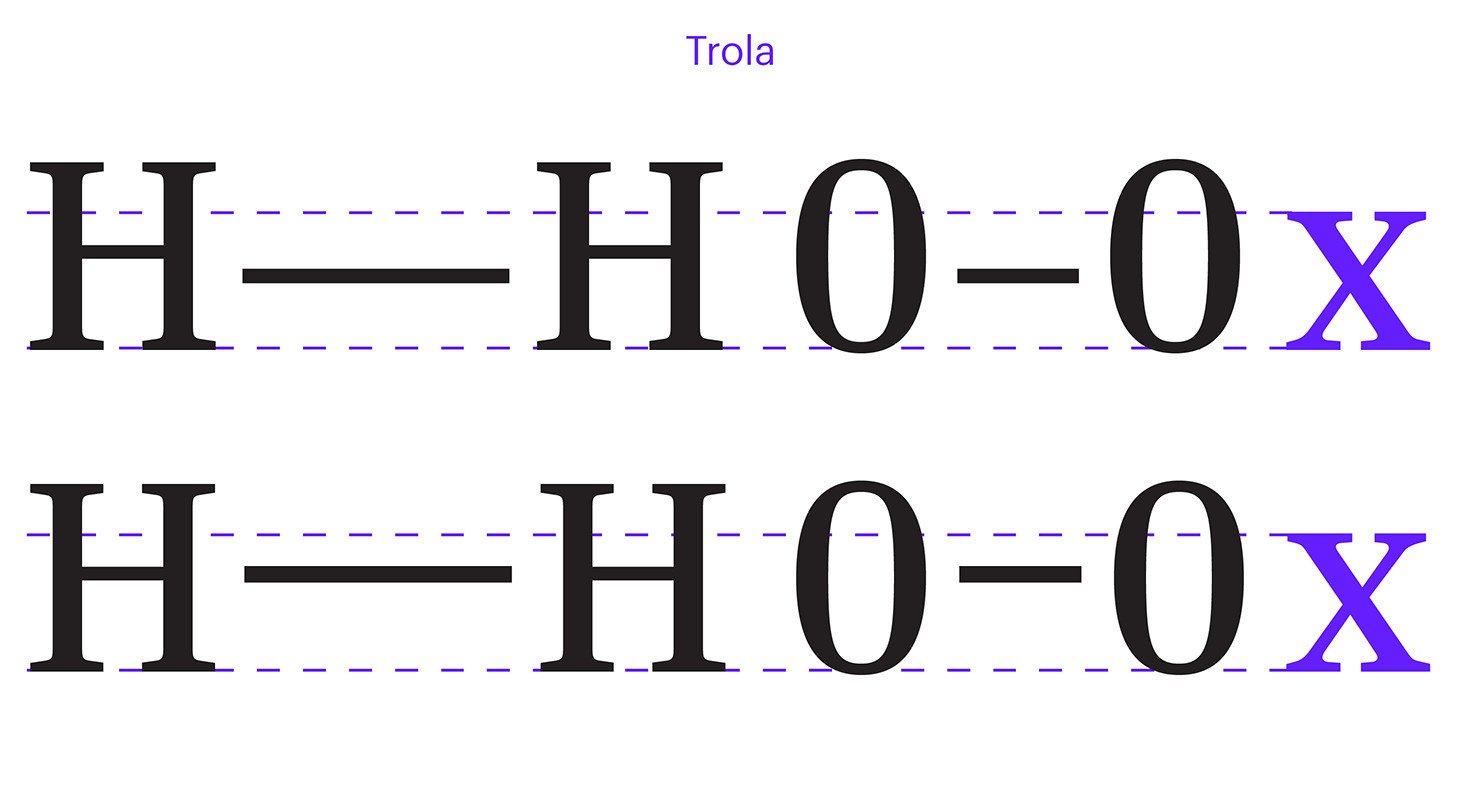 If the font has uppercase punctuation set, it can be switched on as an OpenType feature.

How to raise punctuation in Adobe CC

Change the case to uppercase (the All Caps icon). Some fonts raise punctuation marks automatically.

Other Types of Dash

In addition to the em and en dashes, modern fonts also include the figure dash, used specifically between numbers, and the horizontal bar, used for direct speech.

You might also see a ¾ em and a ⅓ em dash. These dashes have no codes reserved for in Unicode, but some designers produce them manually, by modifying a regular em dash. 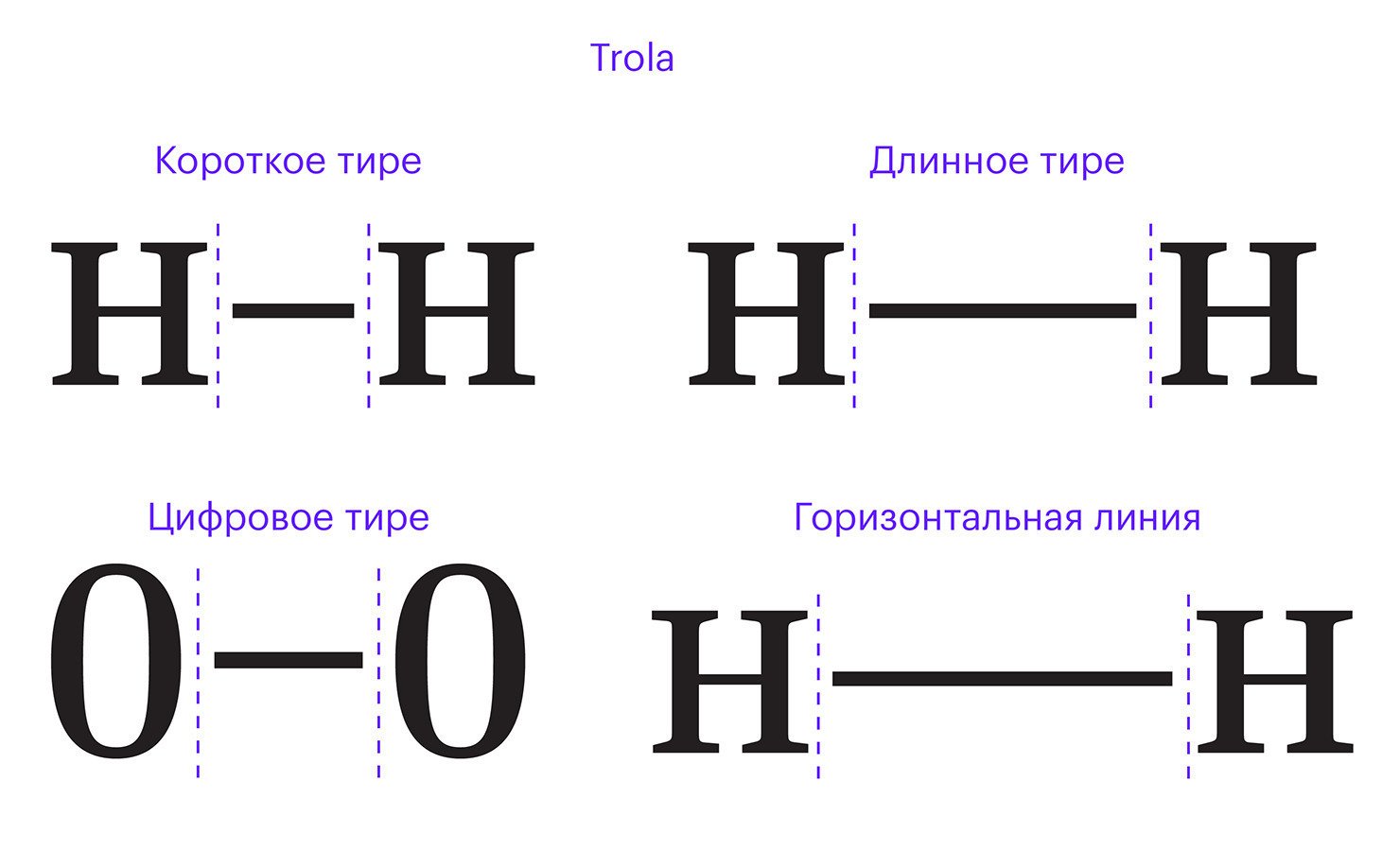 What matters is not so much the absolute values of dashes or even the rules for their use, but their relationship to each other and to other characters in a given font. No matter how many types of dashes there are in a font, and no matter how long the em and en dashes are, these characters should be mutually distinguishable and contextually relevant. And this is precisely what typographers should consider and bear in mind.

How to insert an em dash

How to insert an en dash

How to insert a thin space

How to insert a hair space

Indesign, Illustrator: Only through the menu bar, but you can set up your own hotkeys
Type → Insert White Space → Thin Space

Jan Tschichold, The Form of the Book