Benoît Bodhuin: "Offering some kind of human filling in typography"

How non-conventional letterforms are born from strict limitations, why it is not a good idea to design type in unfamiliar script, and what design robots are incapable of. Ilya Ruderman talked with Benoît Bodhuin, type and graphic designer based in Nantes, France.

Ilya Ruderman: How did you become a type designer? And do you think of yourself as one? Please, tell us about your work.

Benoît Bodhuin: I don’t know whether I am a type designer, or a graphic designer, — or both. After finishing highschool I studied math, after that — product design in Lille, northern France. As for graphic design, it was Belgium, in the city of Tournai. This wasn’t long, just three years of studies. It’s a good school, it’s very general graphic design. We learned to paint, draw, we learned a lot of things. But in the end they don’t teach typography as such. There were not specialists in this area among our professors — it was mostly photographers, or artists. Thinking back, maybe another school would have been better for me, but it’s hard to judge, it was a very good introduction to graphic design. The outcome of these studies actually depended on a student’s personality — it depended on the character of each of us. I took interest in typography at the end of this period. I can tell that I am a self-made man, a self-made typographer.

IR: It’s actually quite common that old-fashioned schools, old-fashioned academies, don’t really reach typography well. Both in Russia and in Europe, — as if typography wasn’t a part of broader graphic design…

BB: Exactly. In France, there are only two schools where they teach typography as a separate discipline. For me it was a long way, because in the beginning I was more of a graphic designer, than a type designer — I engaged in developing fonts for my customers, but it was rather an element of creating a visual identity. But I liked the process, and gradually started to make fonts more and more often. Today, I am more into type design than I am into graphic design.

IR: Judging by your Instagram, there are a lot of fresh typefaces. Where do those come from? Do you produce them for yourself, or for your customers?

BB: It’s a mix of both. My friends ask me to design something type for a signage, of a website. At the same time, I draw typefaces for myself. It’s my own work that gives me ideas for creating a type for someone’s signage, for my friends. And vice versa: a design of some street signage created by request of a friend can give me a new idea for my personal work. One type offers me ideas for producing another type. It is some sort of mutual penetration, mutual porosity. A lack of borders between a commision and my own work — those two elements rely on each other mutually.

Thanks to cooperation with other graphic designers who pass me their commissions (each having its own terms, or requirements), I take on a task that I would never come across by myself, naturally. If a person works alone, it is often the case that she/he tends to go around in circles, repeat her/himself, kick around. While working with other people — and for other people — brings in some new things. It motivates you, it helps you make breakthroughs and discoveries.

So, there is this kind of collaboration where my own aspirations, preferences and choices mix with desires and requirements of a customer. As a result, you have some sort of broth. But it is exactly this potion that makes me create what I actually like.

IR: In your recent projects, it is very interesting how you approach the forms, the contours, the structure. From an unusual perspective. It is some sort of deconstruction: you are reopening classical forms of glyphs, — putting in them something new, and different. How exactly is this happening?

BB: It is all about constraints you have! Requirements that tie your hands, very hard to translate into a typographic language — because of their strictness. And such a constraint is more of an idea, than a drawing. It is some sort of game. I have to apply some idea to each character, — and it is not easy to transfer some idea to all letters. For example, I have to make tiny inner counters. So, I try to find a solution for implementing this requirement in each glyph.

I intentionally opt for difficult, but interesting tasks. It is about constructions that are barely applicable to letter forms. Or, it is not that bad, — but you still have to make some considerable effort. And it is exactly these efforts that turn me on. The most exciting part of the process! You have to mate two things which were never meant to be mated. To bring together two mutually exclusive elements, just to see what happens.

IR: How is your studio organized? Do you work alone, or are there some other designers?

BB: Just me. And I work at home, it’s not an office. It takes a lot of time to create a typeface, it’s not that I design type all day long. I also have other things to do. Like teaching, or my other graphic projects.

IR: Where do you teach?

BB: At a private school in Nantes, it’s called e-artsup. The school offers studies in graphic design, they don’t teach typefaces there. At this school, typography is just a class, not a major: you have to introduce students to a subject, give a general understanding of this subject matter. Students are destined to jobs where typography is not often the heart of their business (like motion or game design), sometimes I have to make a lot of effort to spark their interest in type and typography. However, from time to time, I arrange something interesting for my good students, like organizing a workshop, or an art school.

IR: Have you had any experience with Cyrillic?

BB: No such experience, no. I rarely come across Cyrillic. So, I am not sure that it would be such a great idea to design a letter that I’m not used to see. It’s very much fun to look for a design approach to some letter which is very familiar to me. — Because well, you know that the audience would easily understand what letter it is you’ve created, exactly. While I hardly meet Cyrillic script. When I don’t get to see texts typed in Cyrillic, there is a risk that I would draw a wrong letter, — or that I would draw it the wrong way. I may even think it is a good glyph I’ve designed, with good letterforms and all. But Cyrillic users will look at the results of my work and they will say, ‘My goodness, what is it?’

IR: I’m subscribed to your Instagram, and have been following your projects for several years already. Many times I tried to imagine how those ideas would work for Cyrillic, — and most of the time I’m failing. It would be just, like, super-crazy.

BB: Probably, the typefaces I draw, they only work on my alphabet. Which is Latin. Or perhaps I am wrong, and it is possible to create a Cyrillic version.

IR: How your fonts are selling, is your business going well?

BB: It is going better and better, actually. My business is growing. At the beginning, I had very little profit — just enough for having a beer with my friends. While now it has become very interesting, since now it is the kind of money I can really live off with my business.

For example, two recent typefaces, Standard and Pickle-Standard, sell very well. Before that, it was Zigzag which sold very well. It is a font where you can mix and combine different versions of the same letter. Not very good drawing, but the idea is nice.

After that, I did projects much more sophisticated in terms of typography — but none of them sold that well. While, as a matter of fact, this one was designed by accident! I created it for chatting in messengers, thinking it would be nice to talk with the use of such typeface. At the end of the day, I started selling Zigzag on my website. I was surprised by how people react to it. It turned out that it doesn’t matter if a typeface is poor in terms of design, — while it is fun to use! 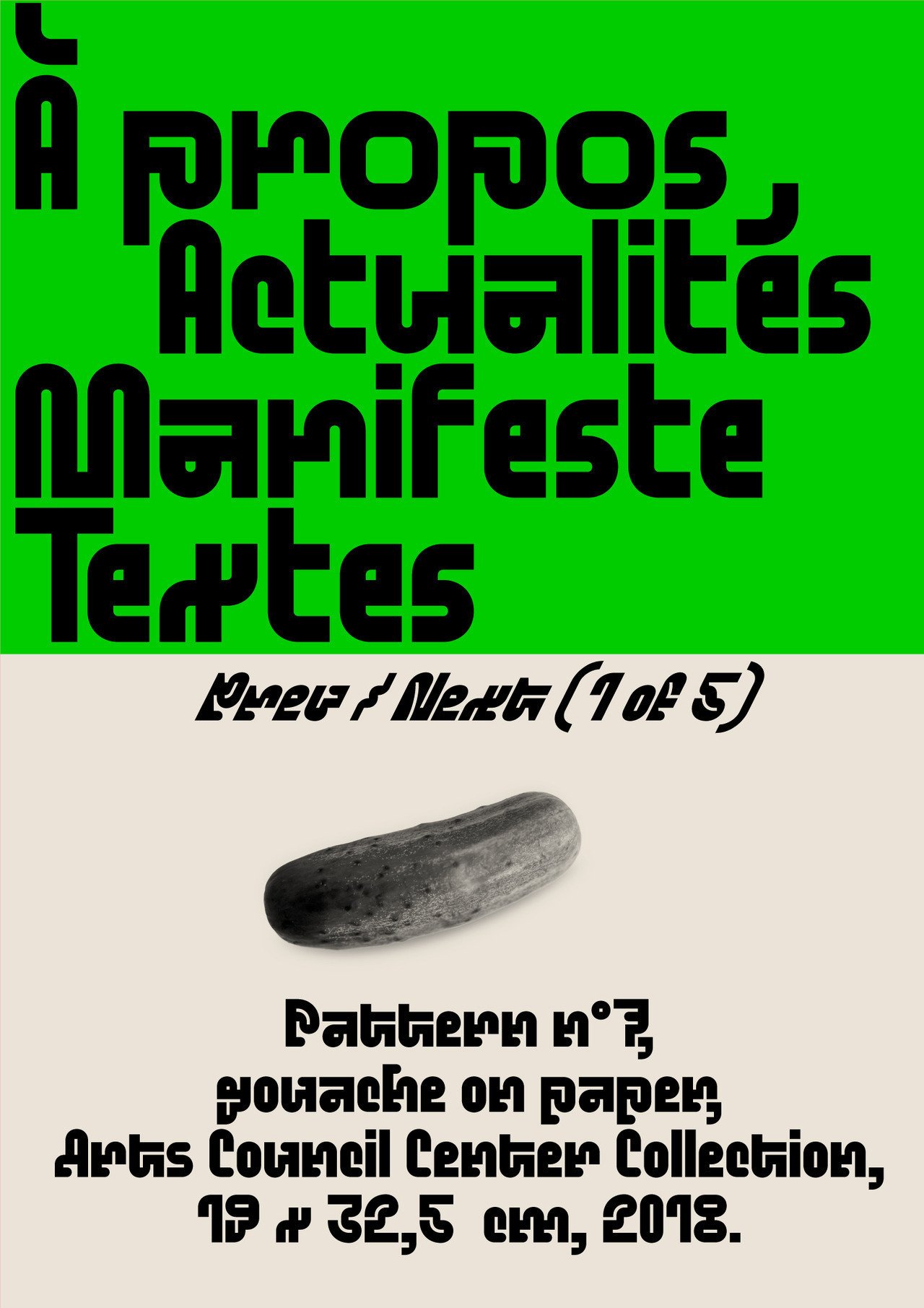 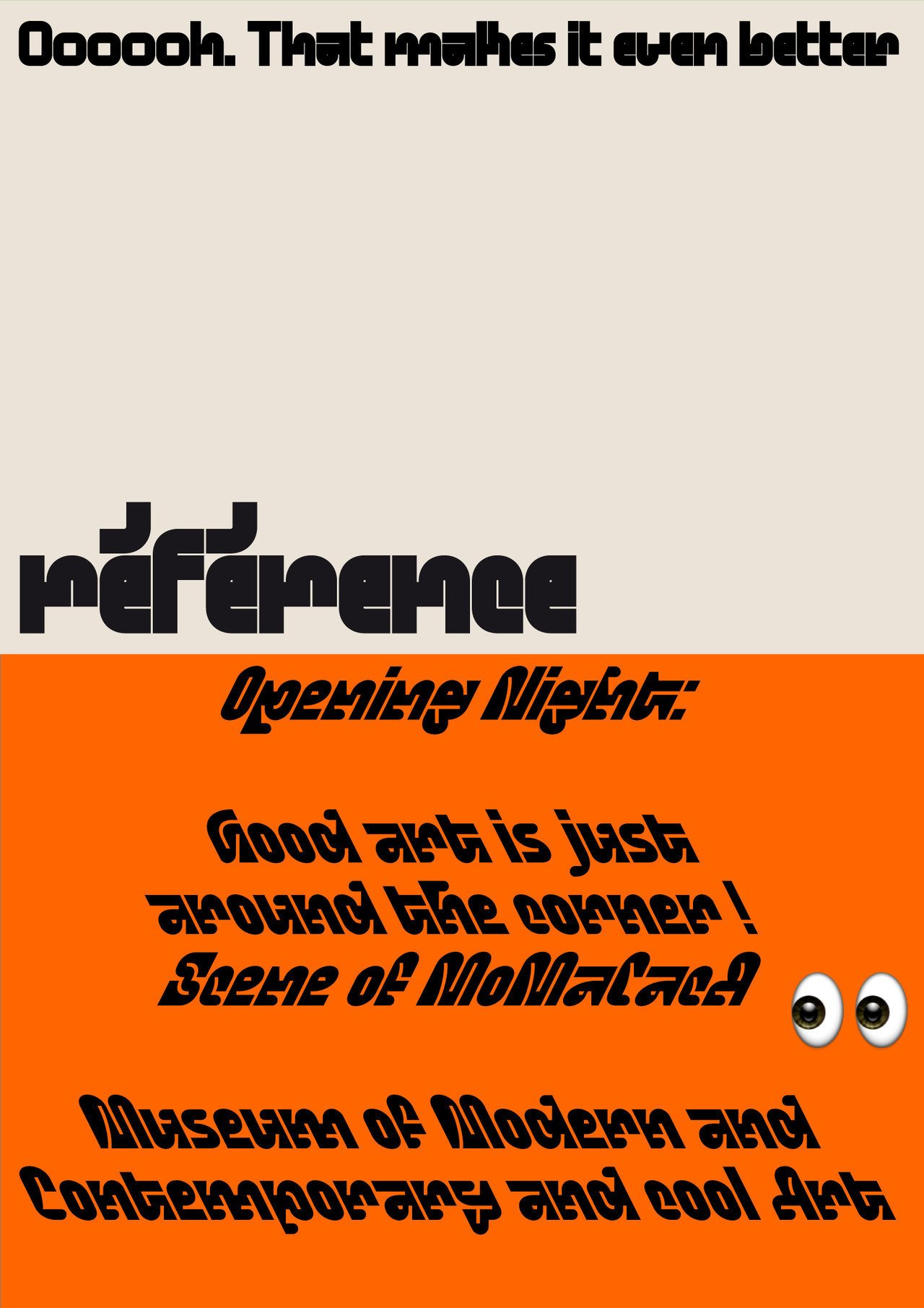 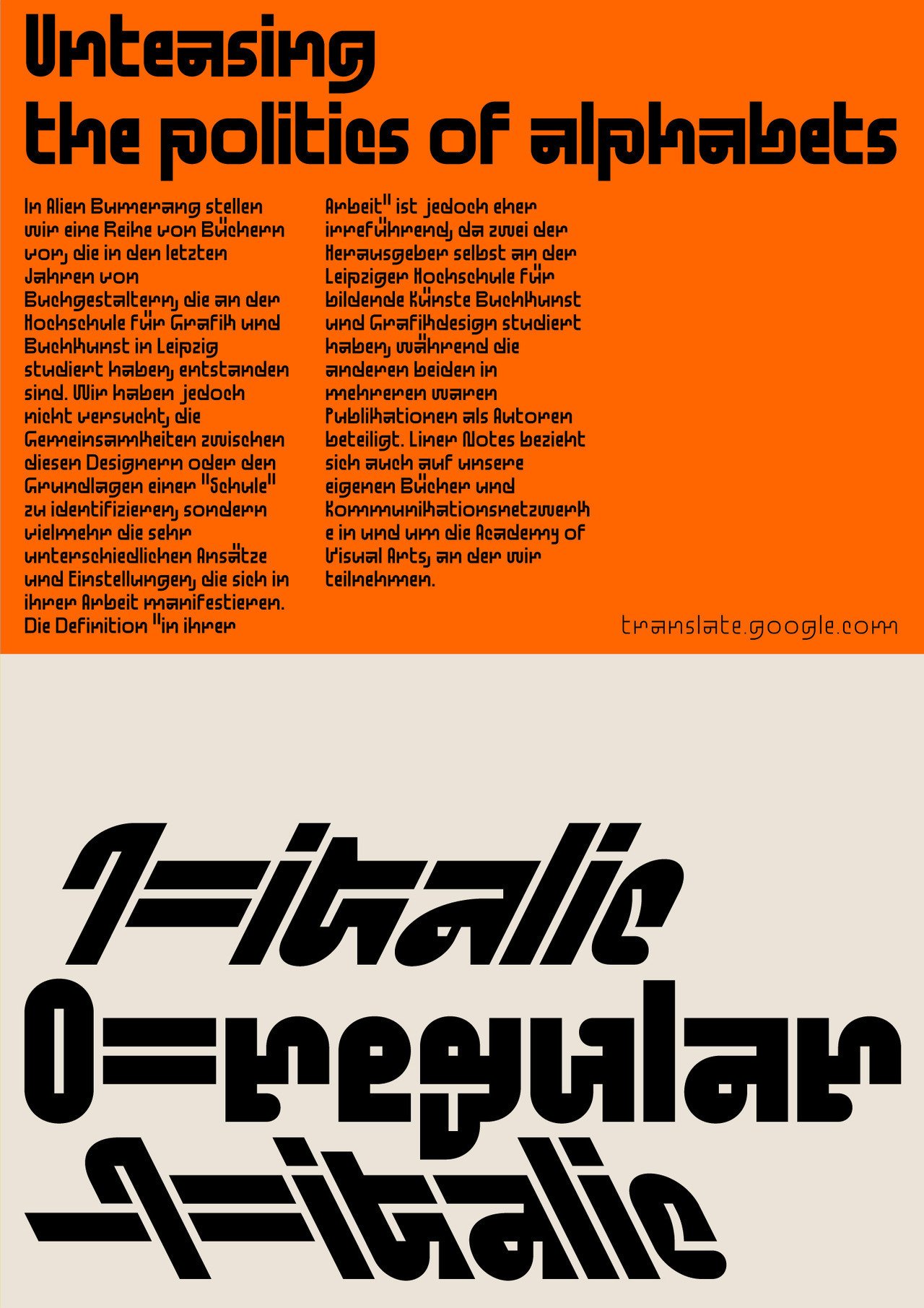 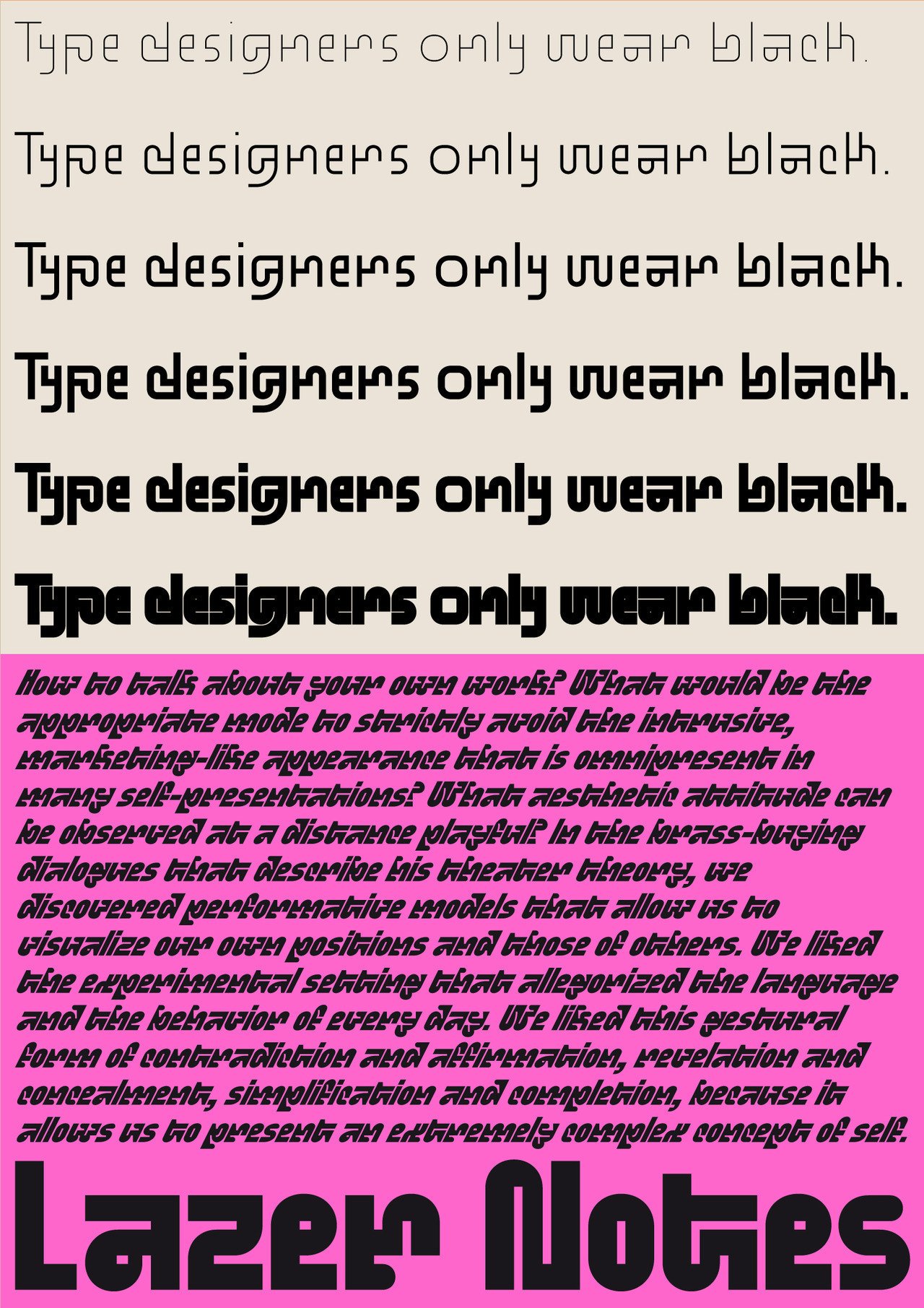 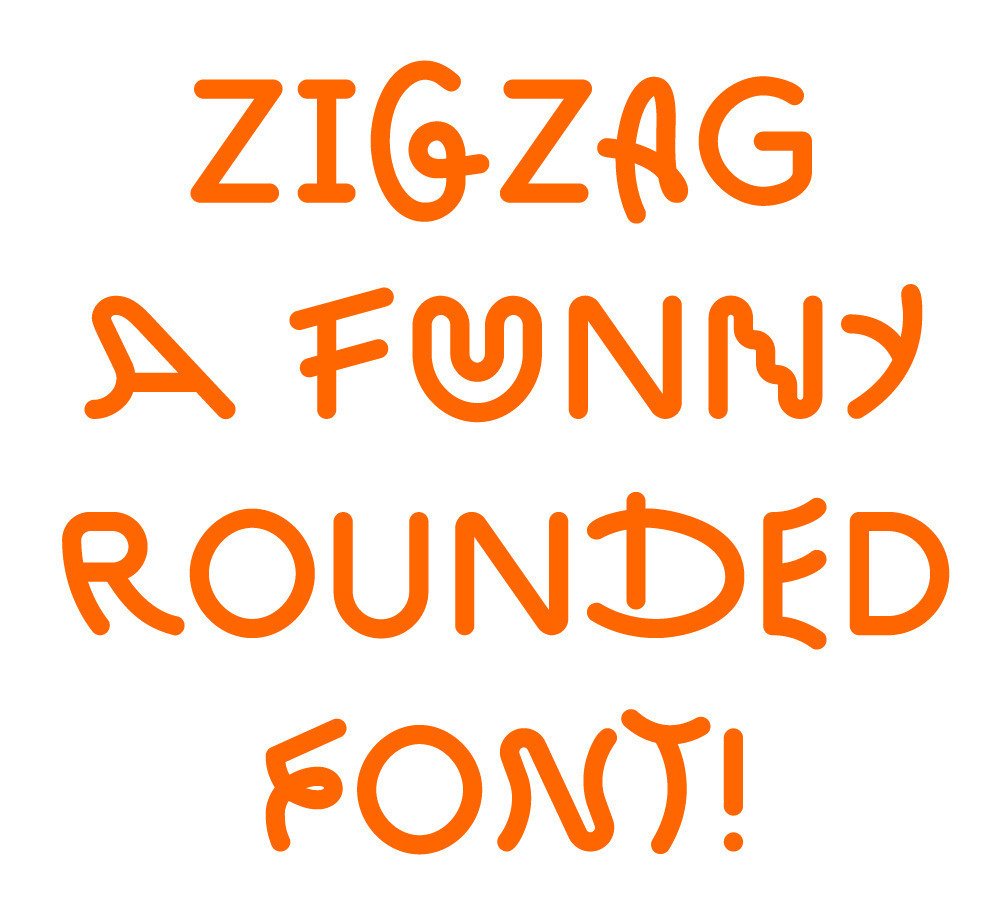 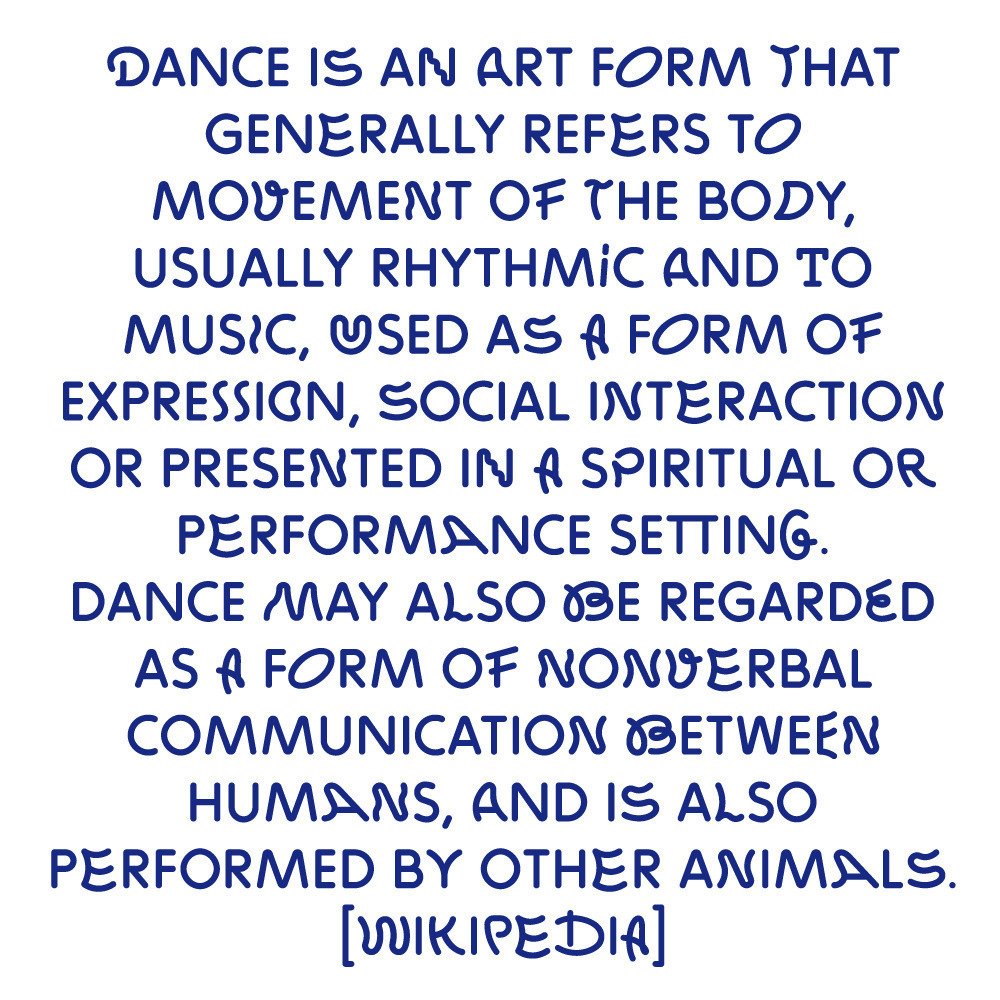 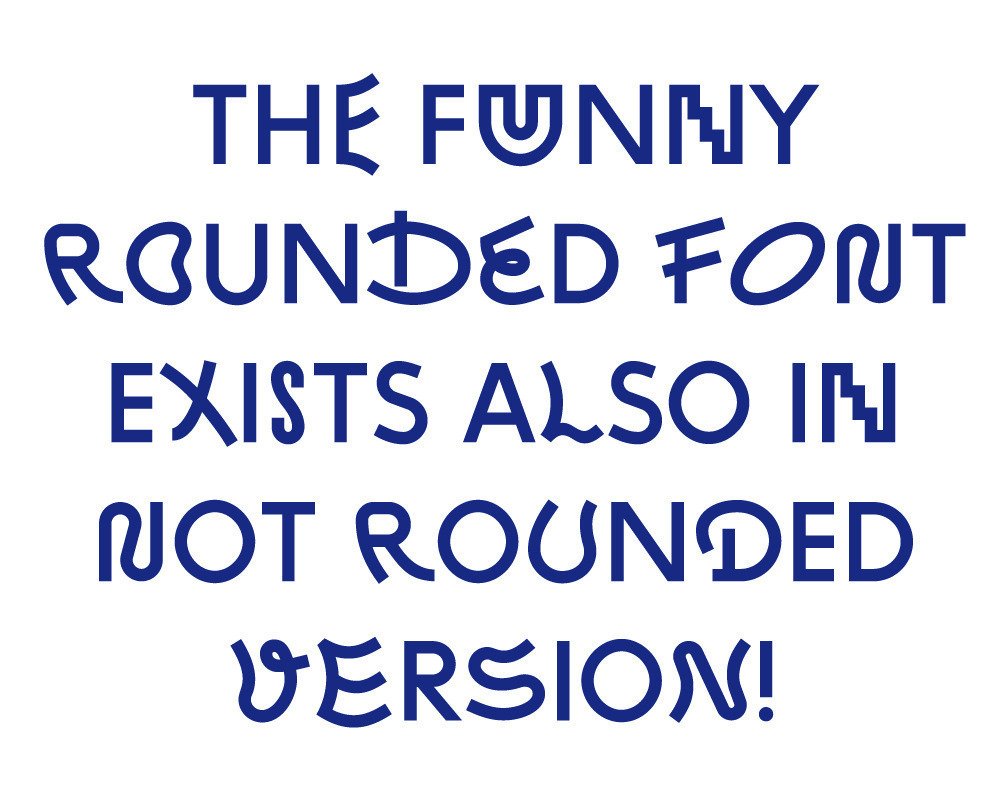 IR: How did users perceive Brutal?

BB: It was mainly positive. Some say there’s something wrong with this font, something’s not working, — while others think it is very fun. For me personally, it is a very special project. Brutal is a very mechanic typeface, — and at the same time it is very hand-written. It combines such different things as a calligraphic, hand writing, and an idea of a very strict structure, perpendicularity of design. It was very quickly that I created this one, actually. Perhaps, at some point I will have to get back to this typeface and remake it. Or, maybe not, I just have to go on, continue my work — and leave this font the way it is now. Drawing type is more an experience than an end in itself. 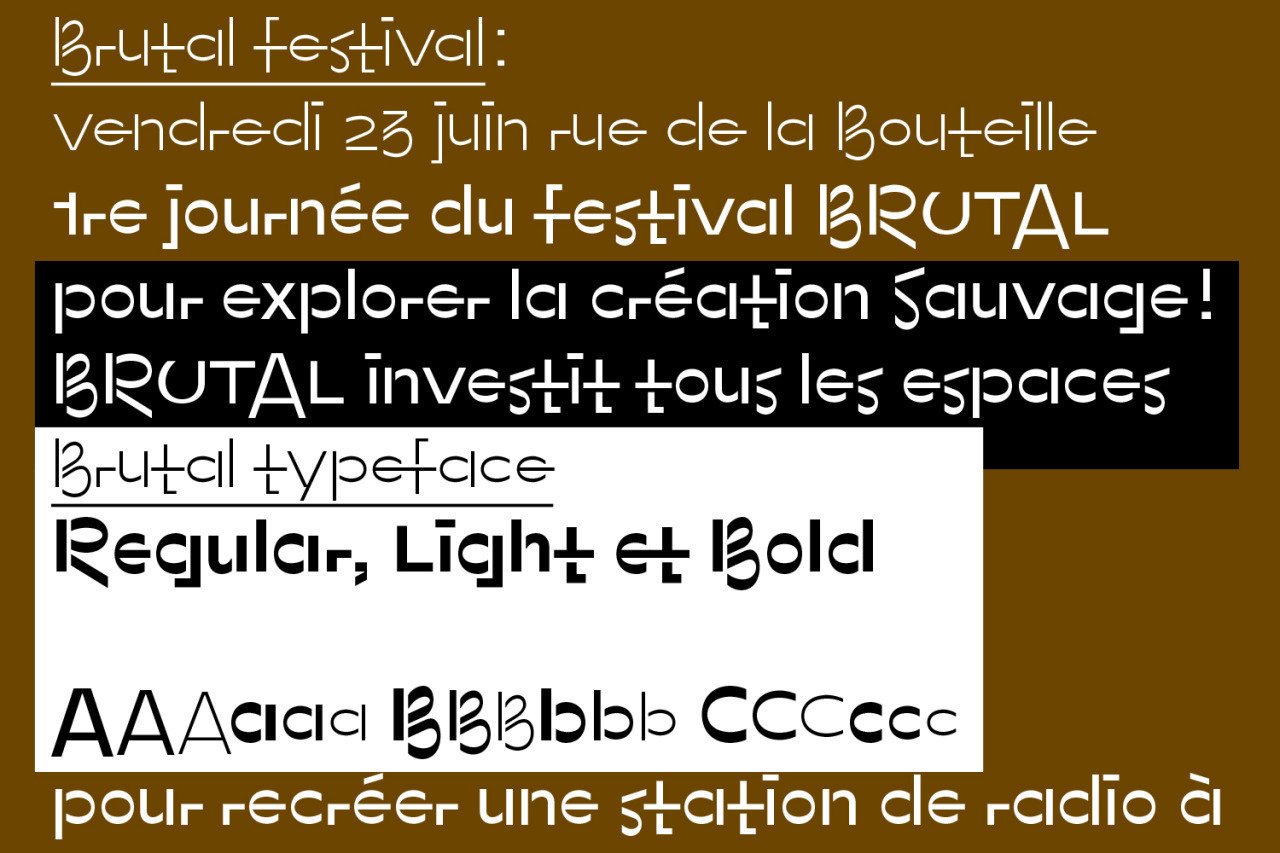 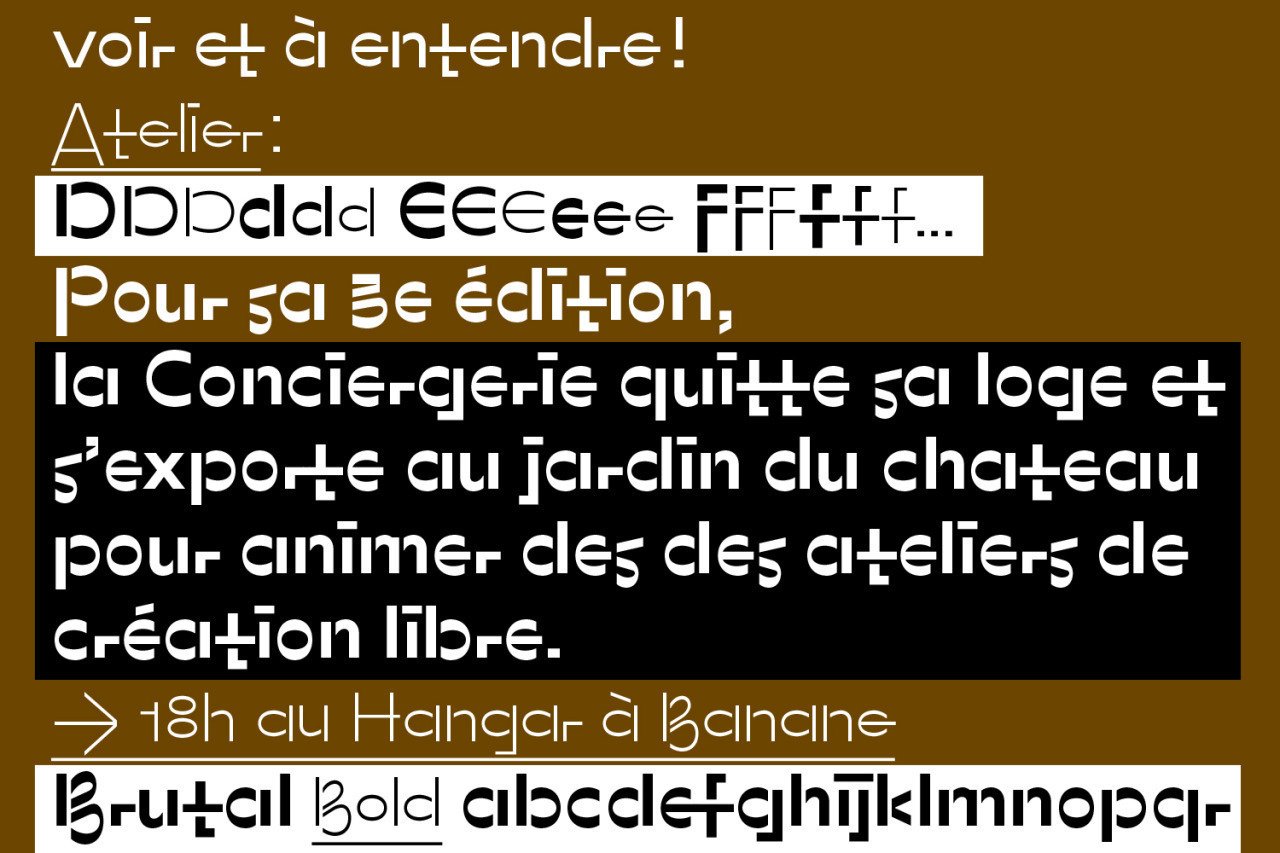 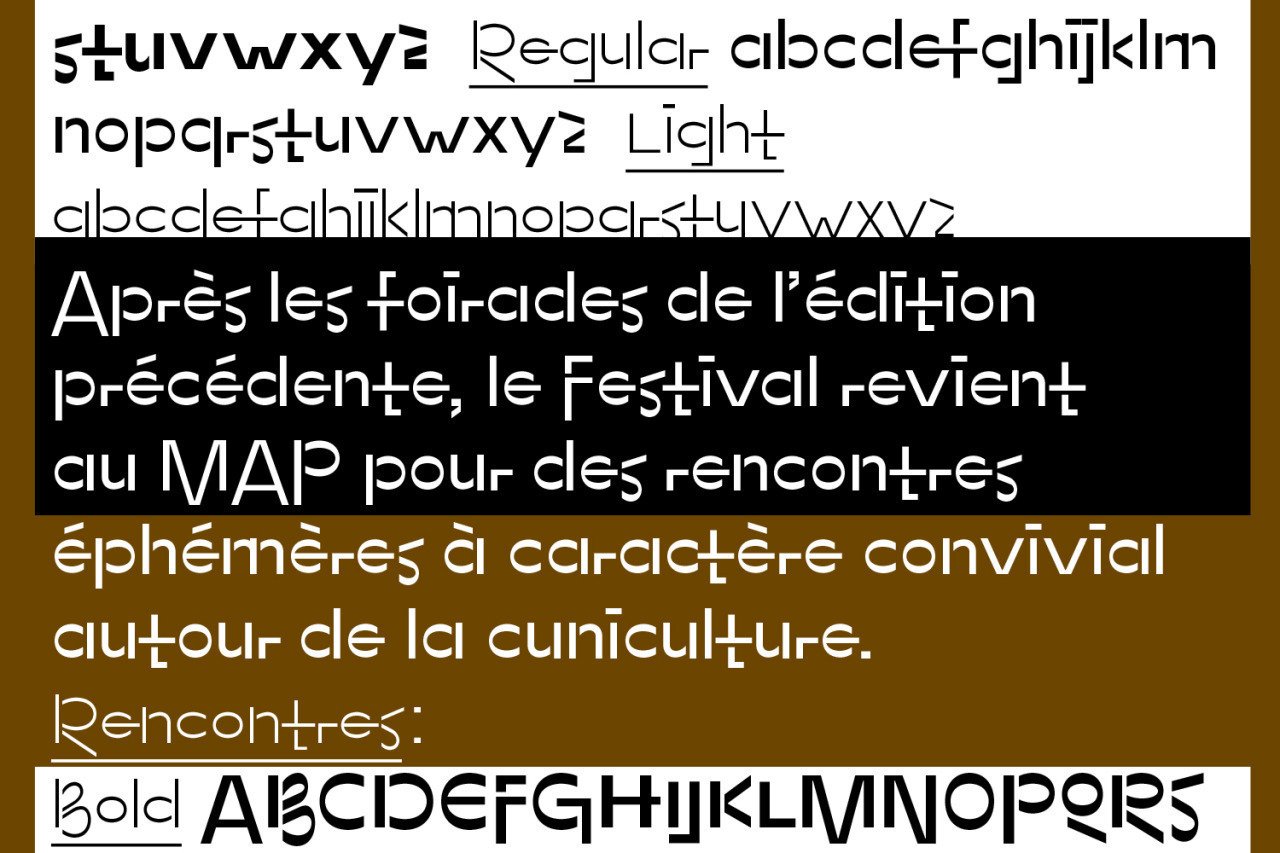 IR: Do you participate in type-themed conferences? Or you take no interest in such events?

BB: I do participate in conferences, — it’s just that those are not English-speaking, since it would be very hard for people around me to understand my English._ (laughs)_ Besides, I don’t think I could be very exciting if I speak in English. But yes, recently I went to a Madrid conference: I delivered my part in French, but they provided a translator. Was pretty nervous, but I liked it. There are also two of my other speeches at conferences available on YouTube. (Benoît gave a talk in Limoges in 2016 and in Brest in 2017. Both were in French. — Editor’s note)

IR: Well, and is there in today’s typographic scene someone whose works surprise you, in one way or another?

BB: I enjoy many things! Like, for example, this British man, Gareth Hague, the one who designed a typeface for the London Olympics 2012… Though, I can’t give you a lot of names now. I have a poor memory for names, but there are plenty of designers who produce very decent stuff nowadays, a legion.

In the past ten years, the world of typography has been seeing something really incredible changes happening. In fact, I don’t know what our next step will be. Now you really have a lot of great type designers around you, so it is hardly predictable, really, what the future holds for us…

IR: And what does it hold for type design, your ideas?

BB: Well, of course, I can’t tell what happens next. But it is my belief that the future is to design something that nor robots, neither machines can do. No robot — I mean, no computer, — can produce a true type design. Today we create a font, and then we can make a lot of faces out of it, automatically: little, big one, a bit different, and so on… That’s so easy! It is great that it is that easy it for us — but that’s no longer type design, you know? It is something in between graphic design and techniques, technical skills. While a designer has to bring art to type, to rely on imagination. Offering some kind of human filling in typography. That’s the idea. 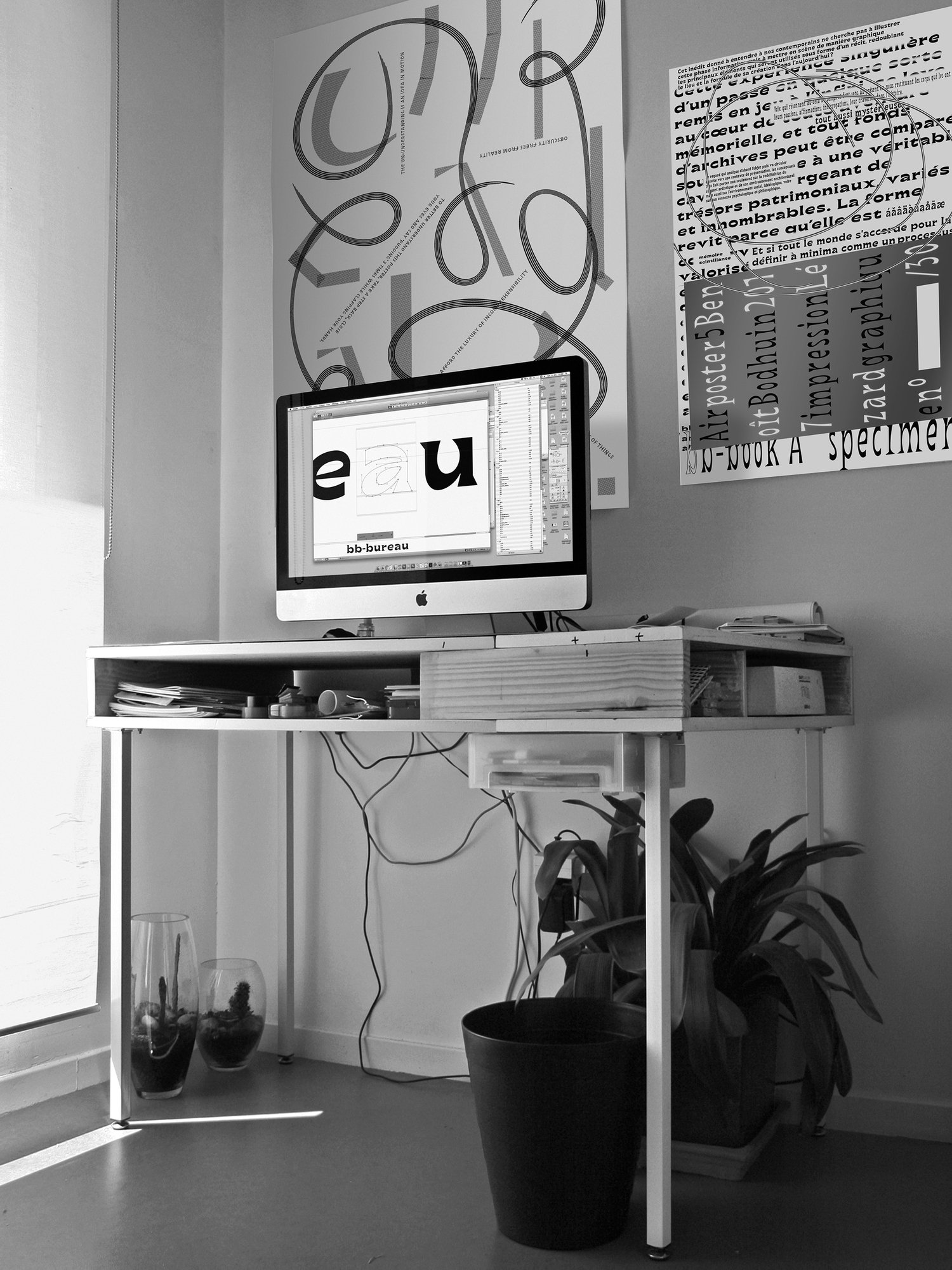