Base&Bloom in use: Radio Dolin

When we were told that we would have a project with Anton Dolin — a YouTube show on culture, not just about films, — I immediately began to draft ideas that evolved into two concepts. The first one was slightly Soviet-style: I looked at the covers of Soviet magazines: Sovetsky Ekran (Soviet Screen) and Iskusstvo Kino (Film Art) where Anton has been working as an editor-in-chief since their re-launch. There was this recurring thing with frames — screens, and I was planning to build the overall style upon it. 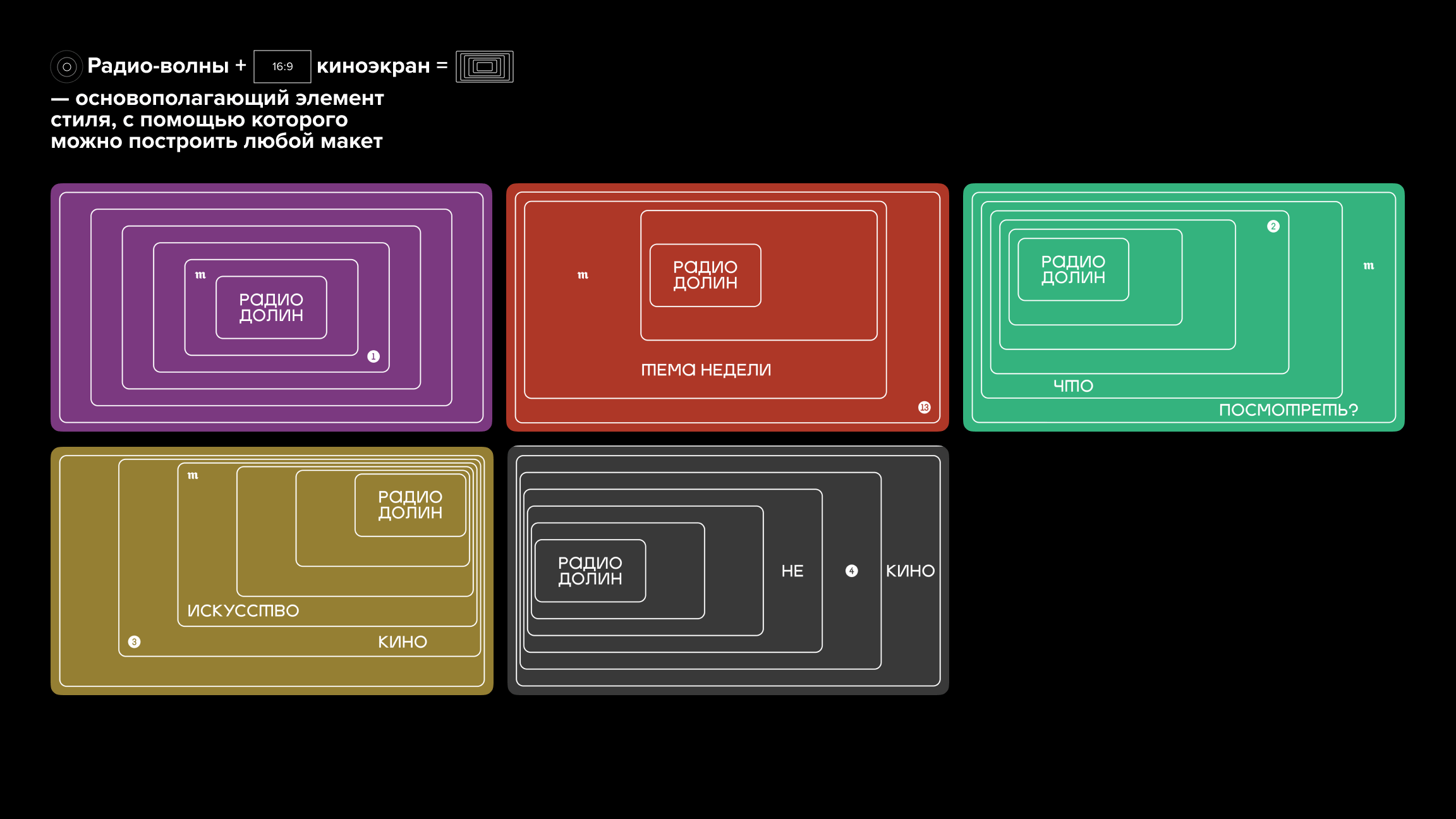 The second idea (which was eventually chosen) was the one with display typography where in the middle there was a typeface with glimpses and flares on it. Basically, it is about the play of light and shadow as an essence of the cinema. And the fact that the style turned out to be rather abstract, works just fine, as the show is about culture in general, and the less there are specific references, the more meanings you can put into it.

Base & Bloom is very display, you won’t set much text in it. Although, it is very distinctive, recognisable, hardly confused with something else. When I saw it, I decided to try it immediately. What really sold it to me was the amount of alternative glyphs, such a room for playing. And so I spend half a day just putting different symbols and combining them — so much fun. In fact, when I was only starting to do design, the glyph panel in Illustrator was my favourite. 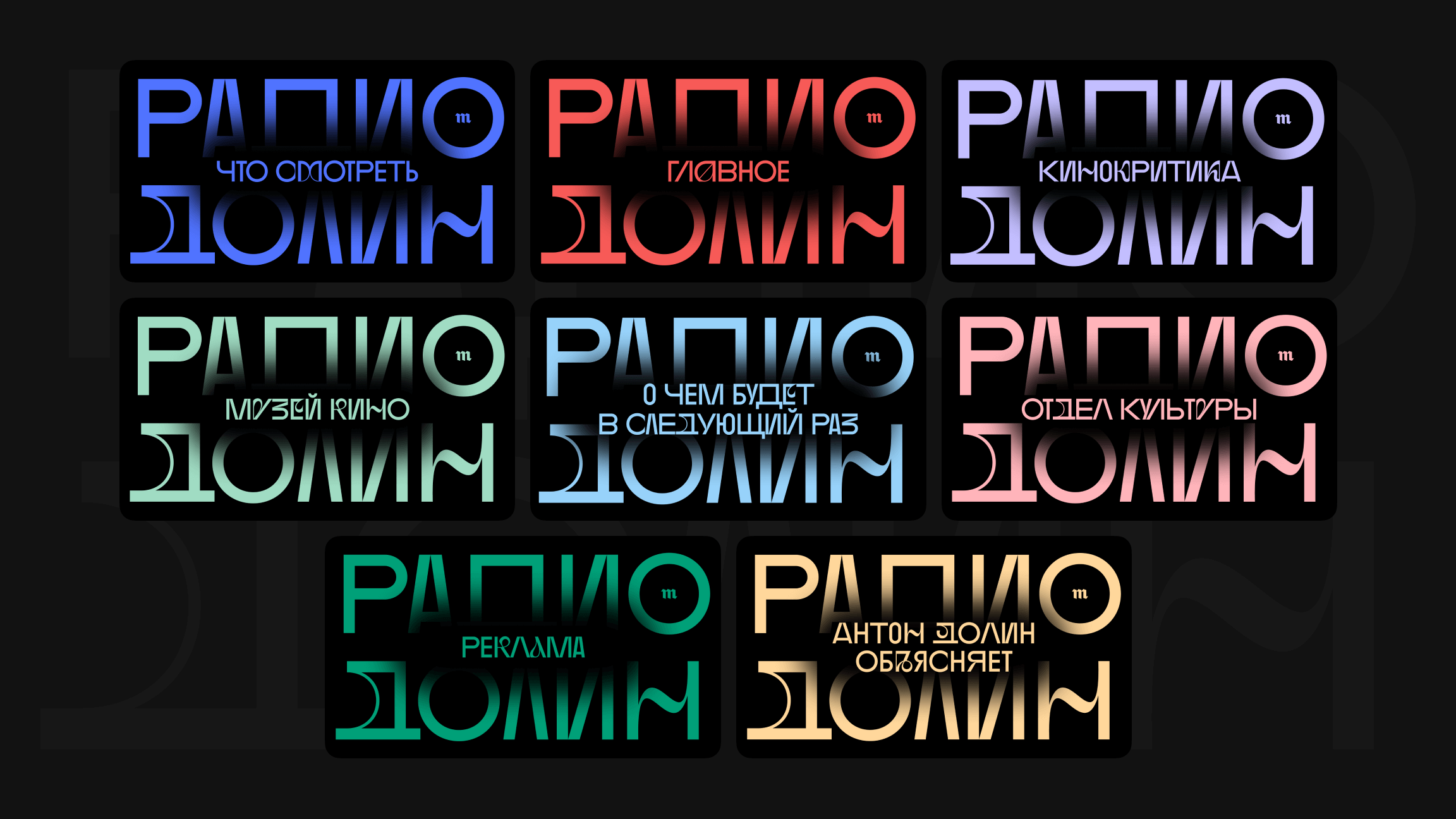 Visually, Radio Dolin feels unlike our other projects. But it is a separate project, and in such cases, I believe, there can be different identities within one media — it still has Meduza’s Has been designated as foreign agent by Russia’s Justice Ministry vibe. Besides, we used Proxima, our main typeface, to pair Base&Bloom. Furthermore, Radio is a personal show, and it was important that the style worked for Anton in the first place, not us. But Anton liked it, and it was not an issue. 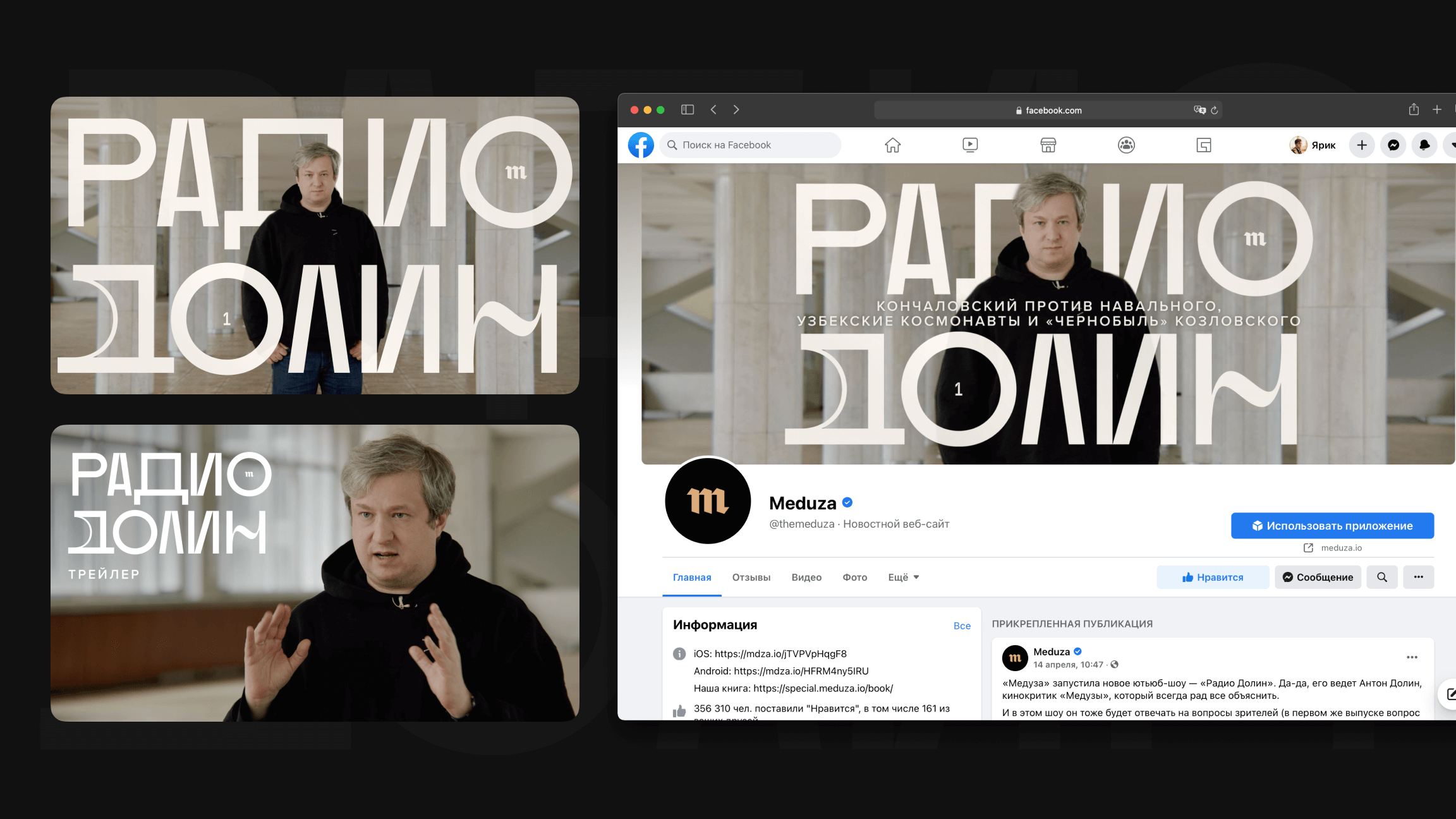 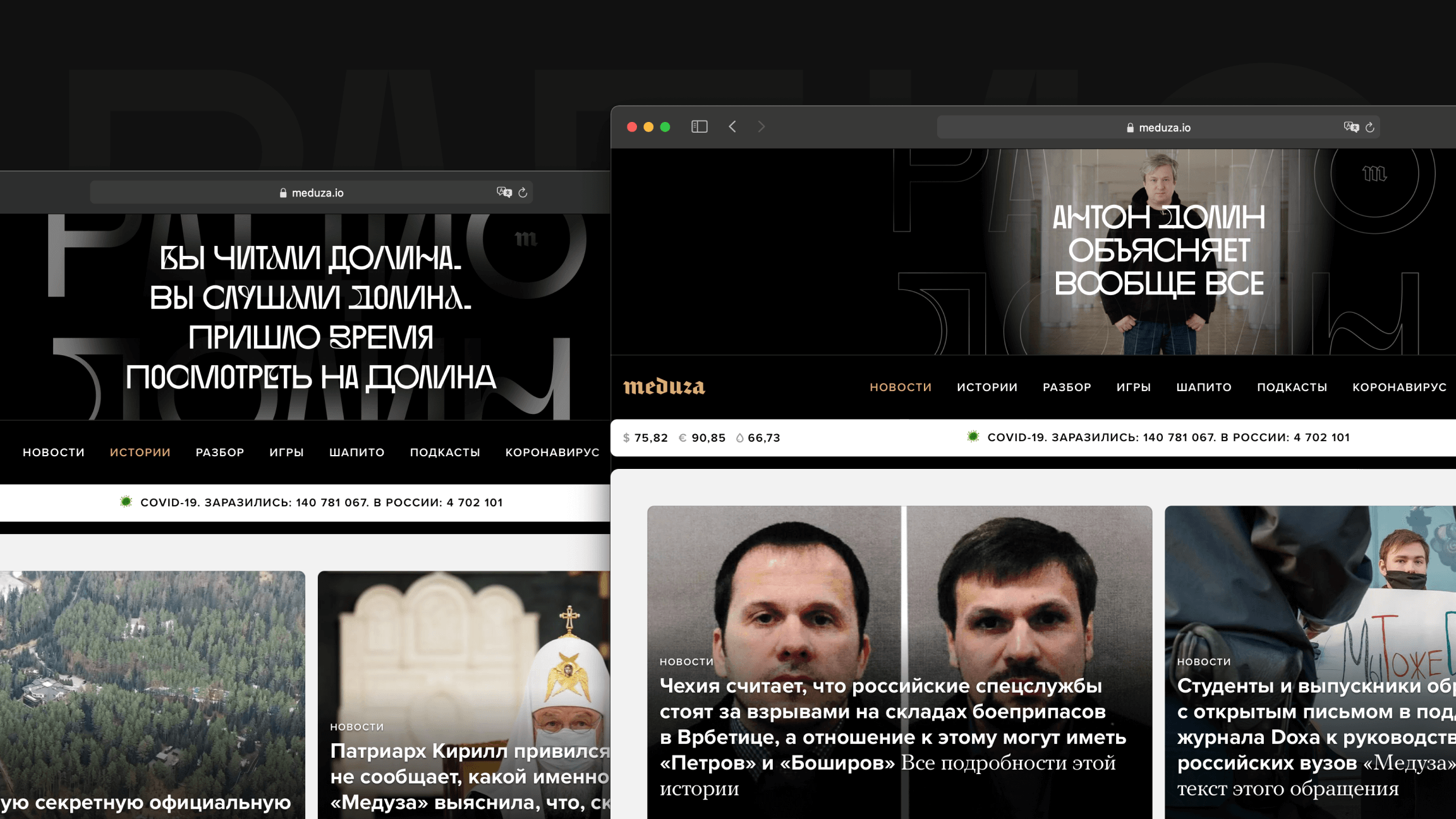 In general, working on video is a multi-stage process. I create layouts in Figma, then our motion designer Andrey Pershin animates all this, and after that layouts are handed over to production where they insert contents and edit. The guys have not yet used all the layouts that we made, but they have a huge room for further experiments. 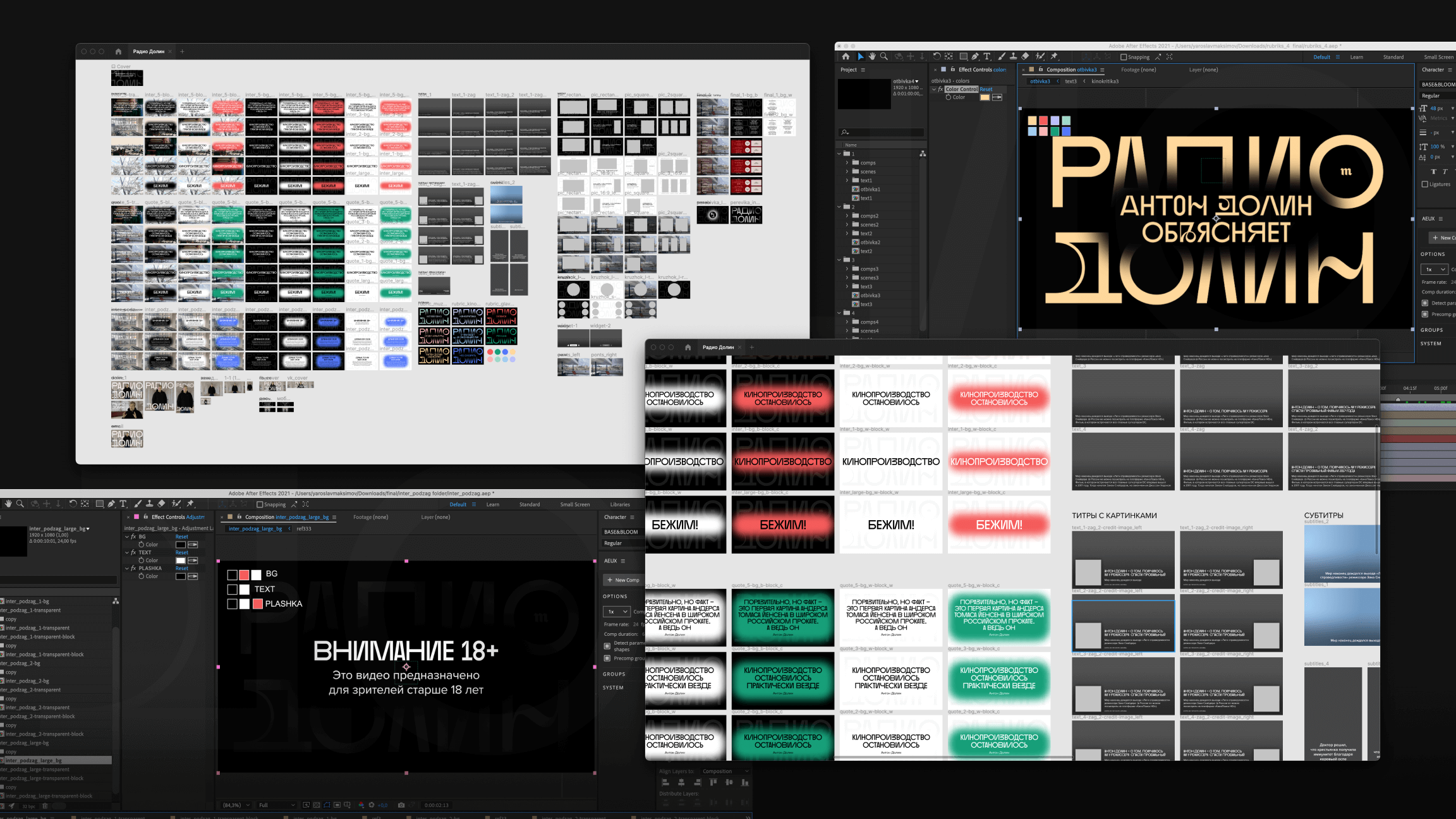 We practically prepared a constructor set, and it was relatively easy — we had already had an experience of working with YouTube. However, while we were making Skazhi Gordeevoy (Talk to Gordeeva), our first show, the process was like working on printed materials. You assembled the video, someone noticed a mistake, but you couldn’t fix it, as the circulation has already been printed — the video has already been uploaded. For video, you have to develop such a system where it would be convenient to work for a number of people at the same time and it would be possible to make changes after publication.

When Radio Dolin appeared on YouTube, I read lots of comments, and none of them were negative. Actually, design is barely commented on in general. After all, everything is about Anton. I saw a couple of feedbacks saying it turned out very noir. Perhaps, that is because of music written by Vitya Isayev, co-author of Monetochka. He started writing when I already had a finalised idea of light and shadow and we showed our layouts to Vitya for him to use those as a reference, to understand what vibe the identity had. And it was a surprising twist with noir — I didn’t have that in my mind.

Base&Bloom by Peter Bushuev from tomorrow’s storefront is a fusion of a quiet geometric sans serif (base) and an ornate high-contrast calligraphy, a response to lack of display sans types and abundance of swashed serifs.